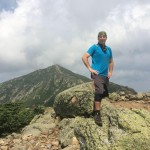 Ten Reasons To Stay Away From The Camino De Santiago

The Camino de Santiago, or The Way of St. James, is the most popular and beloved long distance trail in the world. I have walked this ancient path, and enjoyed my experience. Before my “Camino”, I did all the research, purchased three different guidebooks, read some journals, and watched the films depicting a journey on the path from Pyrenees on the French border, to Santiago de Compestella. According to legend, this is where the remains of the apostle St. James are interned. Virtually every account I read of The Camino, aside from a scathing review by long distance legend, Francis Tapon, were glowing. Most “pilgrims” seemed to have an meaningful experience, and fell in love with the people of northern Spain. I had a tremendous time as well, but there were some drawbacks to my pilgrimage. There were things I wish I had known before I arrived in Spain. Here are ten reasons to reconsider a thruhike on the Camino de Santiago. In particular, the most popular route, the Camino Frances.

I knew the Camino de Santiago was popular. Thirty years ago the Cathedral in Santiago welcomed roughly the same amount of thruhikers as the sign on Mt. Katahdin, at the northern terminus of the Appalachian Trail. A slew of books, documentaries and one popular Hollywood film have helped change that. Present day, over 250,000 pilgrims are expected to reach Santiago each year. The Camino’s path can easily handle the traffic, as it is usually a double track trail or a country road. If one chooses to walk the Camino in the busy season (June 15-September 15), expect to rise early and hike as fast as possible to your destination, to ensure a bed in a preferred alburgue (hostel). I saw many hikers turned away in towns, and forced to hike an additional ten to twenty kilometers at the end of the day in search of a bed. This creates a great deal of stress for the pilgrims, but ample opportunity to socialize with fellow walkers. If hiking during the busy season, try booking alburgues in advance. A good international cell phone plan is a must.

A typical Appalachian Trail thruhiker expects to spend between $1 and $3 per mile. On the Camino de Santiago, pilgrims spend between $5 and $10 per mile. A flight to mainland Europe will likely cost well over $1,000 round trip and then any additional bus, taxi and/or train travel getting to and from the Camino is expected to cost at least $200. Accommodations will cost between $6 and $25 euro  per person each evening, depending on your need for certain amenities. The walk each day will bring the pilgrims past plenty of places to eat. Expect to spend roughly $6 euro for breakfast, $10 euro for lunch/ snacks and $12 euro for dinner and a drink. The pilgrims meal is available in popular alburgues and cafes and typically cost $10 euro. Typically, you will want your money back! The best bargain on the Camino is the baggage transport. See someone in the Pilgrims Office in France or a tourist office in Pamplona and arrange to have your backpack shuttled each day to their destination for roughly $75 euro for the entire trip! Sign me up for that one. The Camino runs directly into several villages a day, so purchases of gifts to commemorate your trip will be ever present. 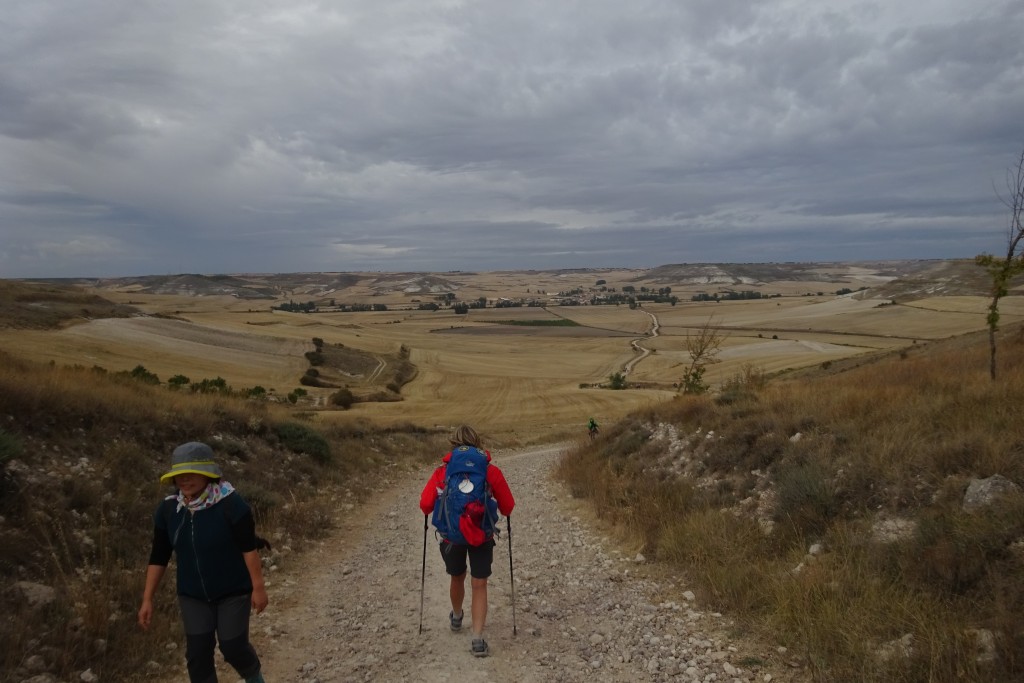 3. The Food is Terrible

In my minds eye, I envisioned traditional Spanish meals in villages, with delicious and authentic versions of paella, stuffed peppers, and delicious tapas! Unless you want to pay triple the cost, in the bigger towns, what you will get is very poor diner versions of these dishes. Canned vegetables and lots of ham (jamon) rule on the Camino. Food represents the worst value on the journey, and I often wished I had brought my backcountry stove and cooked my own meals from local grocers. One frustrating aspect of the Camino is walking past endless farms and pastures, yet very infrequently seeing that food on your plate at night. The economy on the Camino is decades behind the American system, and thus the distribution chain is very rudimentary. Fresh bread (half a euro) and wine ($2 euro a bottle) are tasty and a bargain. Near the end of your walk, Galician broth will be available and it’s a tasty cousin of our own kale soup, made primarily of a tall collard green type vegetable called berza. The seafood is not as good as advertised, perhaps because the ocean temperatures there are simply not cold enough. Octopus is popular, and if someone tells you it’s kind of like lobster, don’t believe them.

Deforestation isn’t only a Spanish problem, it’s a European issue. Once the Camino leaves Pamplona, in the east, trees become pretty sparse until you enter the final province of Galicia. Only 4% of Spain is covered in what’s known as “primary forests”. Primary forests are those in which there are native species covering an area with little or no human activity. Reforestation efforts are underway, and have been for some time. Previous attempts to repopulate trees have been fraught with ineptitude and corruption.

A land without trees isn’t going to have much in the way of wildlife. Deer are plentiful in the US, but are rarely seen throughout Western Europe. Trees and forests are a important food source for deer as it is for bears. Spain is one of the few places in Western Europe with a bear population, but you won’t see one. The Cantabrian Brown Bear, is barely hanging on, with a population of about 80 in all of Spain. The Pyrenean Brown Bear has a population of as many as 70, but they need forests and animals that live in the forest to continue to survive. The penalty for killing a bear in Spain is astronomical, so that’s good news.

Nothing strikes fear into the heart of a pilgrim like the sight of a overweight, middle aged male checking into an alburgue. Earplugs, headphones and heavy doses of state sponsored medication couldn’t defend sleepers against these nighttime pests. Alburgues tend to sleep between 12 and 200 pilgrims each night and I saw pilgrims carrying their mattresses into hallways, kitchens and even outdoors to escape power snorers. The problem got so bad, I began to seek out alternative accommodation. I found that for a little more money, I could rent an apartment with a kitchen or stay with a family, where we received good tasting, healthy meals that I envisioned when I began to plan the trip!

For an outsider, siesta sounds like a cute cultural tradition, different from our pressurized American lives. In reality, it’s hindering economic growth and it’s bad for the Spanish worker. Typically, a pilgrims’ day begins around 7am and the walking finishes between 1pm and 3pm. Just when the pilgrim finishes their walk, they may need to visit a pharmacy, an outfitter, or a bank. No can do! Those businesses close each day for four to five hours for siesta. This deprives the pilgrims of some supplies, and also costs these businesses an opportunity to extract crucial tourist money, at a time when they are most free to spend it. Siesta is bad for the Spanish worker because it lengthens the day and makes their meal times awkward. There is a constant struggle between tradition and viability in the economy of Western Europe.

I have never been more convinced that our American tradition of tipping is the best than when I backpacked across Europe. Do not construe this criticism of service in Spain as to mean they are not gracious and accommodating. Service is a learned ability. When to take an order, picking up cues from the customer, when to leave a check, refill water. Pressure on the waitress or waiter to preform, in turn leads to better performance from everyone in the restaurant especially the kitchen staff. A customer on the Camino has to be aggressive in placing an order in a busy restaurant and in receiving the bill. It took us a couple of weeks to figure out that we needed to push the issue. Each time, they kindly provided it, but there was not the concern you might get here in the States. I always left a tip, regardless, and while the service staff in Spain are not expected tips, the government does. Spain has 21% VAT.

9. Not The Endurance Test It Could Be

The great thing about finishing a thruhike in the United States is that if you complete one of the three triple crown trails, you have exhausted much of your strength and emotional resources to finish the journey. The Camino is easy. It’s mostly flat and the path is smooth and wide. The much ballyhooed climb over the Pyrenees on the first day is akin to climbing Blood Mountain in Georgia on the Appalachian Trail. It’s paved at least half the time on that climb. I exhausted more energy hiking the hilly 90 km Camino Finisterre, that extends from the Cathedral in Santiago to the Atlantic Ocean, than I did in all the 850 km of The Way of St. James. 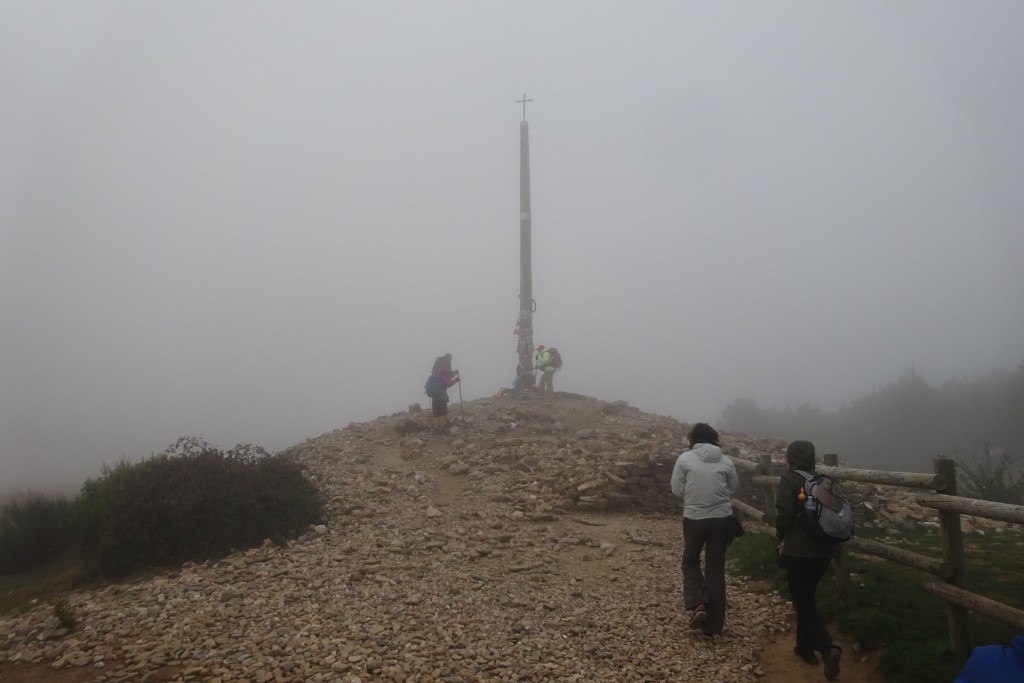 Didn’t I already touch on the topic of food? Yes, but bacon is so important it deserves its own place on this list. Breakfast is often complimentary at hotels or B & B’s and bacon is featured along with its fellow atrocity, blood sausage. European bacon evidently means a piece of dry ham with a sliver of fat beside it. It’s about half as good as the pathetic crap they call bacon in Canada. It’s not good, but don’t protest too loudly, as Spaniards are proud of their jamon. Jamon and other cured pork products typically make up about 90% of a meat section in a larger grocery store. We met one woman, who considers herself a vegetarian, but eats jamon without pause, as if its its own category.

Despite these reasons to NOT walk the Camino de Santiago, I still encourage others to do so, with these things under advisement. I would hike it in an alternative season, or perhaps try the Camino del Norte, which is a bit more rigorous and less crowded. I’d definitely shuttle my bags ahead the whole way, and look for slightly more expensive accommodations, but with more privacy and a kitchen. I might consider taking a stove and a tent. I’d definitely take crackers with me. Snacks like Cheez Its, Goldfish, Triscuits or Ritz will not be available to you, (we went on many wild hunts for Goldfish that went nowhere.)
I’d focus on the hundreds of ancient churches, the majestic cathedrals, the beautiful people and the lovely cobblestone streets. I’d be honored to once again follow a path that millions of pilgrims have walked and occasionally died on before me.

Read the counter to this article: 10 Reasons TO Hike El Camino De Santiago