The days are getting shorter! When I got up it was still dark, though dawn arrived before I got on trail. Immediately I hiked up Moxie Bald Mountain, which had a cool rock tunnel near the top. The summit was a sea of rock slabs interspersed with stunted trees. I liked it and sat briefly to enjoy the view. 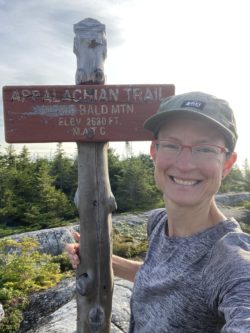 There were several stream fords. I took my socks and shoes off for the first one. Though it looked muddy, the water was clear and cold, rising to the bottom of my knees. For the second, I removed my socks and took out my shoe inserts. Keeping my shoes on gave me good traction for crossing both slippery and submerged rocks. At the third stream I made it across on branches and dry rocks.

I ate lunch beside the roaring Piscataquis River, watching water glide and tumble. Feeling gratitude… after today we have only a week until we summit Katahdin. It is exciting and sad at the same time. I am ready to accomplish my goal yet I will miss the immersion in nature, daily adventure, and the company of my trail family.

After 19 miles of hiking, we were shuttled to Shaw’s Hiker Hostel. We ran into old friends such as Bumblebee and Sir Elton. Also, Strider (same trail name as me) that I met at The Notch. I collected my final resupply box. It contained a plethora of surprise treats from my wonderful family. We purchased a group food drop tub and I put about half my food supply inside. The hostel will deliver it in the 100 Mile Wilderness.

All of us opted for the renowned Shaw’s breakfast. It was outstanding! I ate three fried eggs, perfectly crispy potatoes, and four delicious GF blueberry pancakes topped with maple syrup. There was also orange juice and coffee. While we ate, Hobble-It and I chatted with Rawhide and Florida Man, who had hiked in that morning.

A van shuttled us back to the trail. Since a light rain was falling, we started in full rain gear. Shortly after hiking three miles to a paved road crossing, we entered the 100 mile wilderness. A sign warned us “this is the longest wilderness section of the enter AT and its difficulty should not be underestimated”. Soon the rain slackened and the sun appeared in a blue sky. I passed many ponds and saw a large garter snake. In the early afternoon the sky darkened and there was a second, brief rain storm. 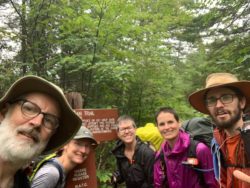 The terrain went up and down, often requiring care on the slick rocks and roots. Bridges don’t seem to be a thing in Maine. We forded a couple small streams then reached Big Wilson Stream, which had a rope line strung across its width. I clutched the line in one hand and my poles in the other. The deepest spot was mid-thigh on me. I was glad for the rope. Before proceeding, we made sure all five of us crossed safely. 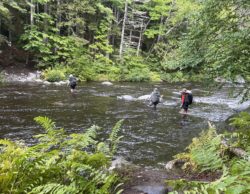 As sunset approached we arrived at a roaring stream with falls. Dinglebeary directed Tracks, Serendipity, and I upstream. Us gals made it across a rock slick with water, but Tracks slid into a pool, submerging himself and his pack. I turned to help and saw his poles floating away. I hooked the strap of one with a pole. Unfortunately the other pole floated downstream. Tracks regained the shore and the three of us crossed safely. Though he was drenched, the gear in his pack stayed dry. Dinglebeary searched for the pole while we waited for Hobble-It.

Darkness fell so we turned our headlamps on. We forded another short stream holding onto a rope line. Finally we reached Long Pond Stream Lean-to. The camping was scant. Tracks set up by the shelter while a grumpy guy berated Serendipity and I for setting up right next to him. It was 8:30 so he was rightly upset, however there was nowhere else to go. In fact, Dinglebeary and Hobble-It continued up trail in search of spots.

Since it was a chilly morning, I reluctantly put on my wet shoes and socks. Returning from the privy I ran into Sir Elton, who also lost a pole while crossing Vaughn Stream. His tent requires two trekking poles for setup so it was an even harder loss. Serendipity and I met up with Tracks and the three of us began the climb up Barren Mountain. It wasn’t long before we came across Hobble-It, ready to go, and Dinglebeary, tent still erect and about to make breakfast.

The ridge preceding the mountain’s summit offered a breath-taking view of a large lake studded with tiny islands and surrounded by forest. Barren Mountain itself contained an abandoned firetower. I took a break there to snack and text, enjoying the warmth of the sun. Then it was back into shadowy, moss covered, quiet woods. 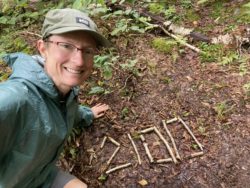 In a couple miles I encountered the 2100 mile marker. Wow, crazy that it was the last one I will see on this trail. Sometime after I came upon the wreckage of a crashed personal plane. It looked as if it had happened in recent years. Another thru hiker informed me that the two passengers survived and hiked out.

Most of the time I hiked by myself, though we had a tramily lunch on Third Mountain. It was sunny and we dried socks, shoes, and gear while we ate. There was one 100 ft. stream ford in the late afternoon, but it was less than knee deep. Afterwards I finished “The Ballad of Songbirds and Snakes” audiobook and transitioned to upbeat music. It was getting dark when we stealth camped one mile prior to the lean-to we had hoped to reach.

The morning was even chillier than yesterday. Happily my puffy, beanie, and gloves kept me warm. Soon we were ascending a series of four mountains, each gradually getting taller. I found the terrain beautiful, still awed to see a green forest floor in addition to green tree leaves. We spotted a mom grouse on a tree branch and two fluffy babies pecking around the forest floor. The mom did not get upset when we went between her and her babies. 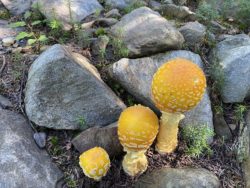 I hiked almost all day with Serendipity, Tracks, and Hobble-It. When we reached the top of White Cap Mountain we took an extended snack break to enjoy the sun’s heat. It is the last tall mountain we climb prior to Katahdin. In fact, from the summit we caught our first glimpse of Katahdin. I was surprised to see it at the end of a chain, having pictured it as a standalone peak. 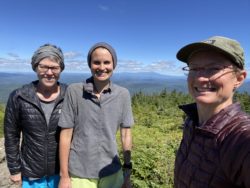 The descent from White Cap mountain was a rock stairway that must have taken a lot of work to construct. Several miles later, Hobble-It and I took a lunch break on fallen tree sections. Then came a ford of the East Branch Pleasant River. I rock hopped across, making a daring jump at the end. The others were wary of the jump. Tracks changed into his crocs while Serendipity and Hobble-It ended up with wet shoes.

A final mountain stood in our path. Afterwards we flew down what was a fairly easy trail. Even with the extra mile from yesterday, we reached our goal lean-to and set up our tents in a perfectly flat spot nearby. It was great to arrive before dark. As we started to make dinner, Dinglebeary arrived and we all ate together, enjoying the rushing noise of the nearby river.