Long overlooked in our annual surveys, Appalachian Trail (AT) section hikers were the focus of this year’s survey. We surveyed 448 people, 43 of whom had completed the entire AT in sections, i.e. become “2000 milers” in over a year, and 405 who were in progress working towards this goal. This post focuses on the demographics including comparisons to thru-hikers. For the nuts and bolts, keep reading, or else skip to the TL;DR at the bottom.

498 hikers completed our survey. Of these people, 34 hikers in the survey had completed the entire AT, or become 2000 milers, by hiking it in sections. 414 Hikers were attempting to complete the AT in sections but had not finished it yet. Hikers who had completed a section with no intention to complete all 2000 miles (59 of them) were not included in the rest of the analysis below. From here on out in this post, “section hikers” refers to people who have completed the entire AT in sections or are working towards that goal and have completed at least some portion of the AT.

Further reading: check out Part One of our AT Section Hiker Survey. 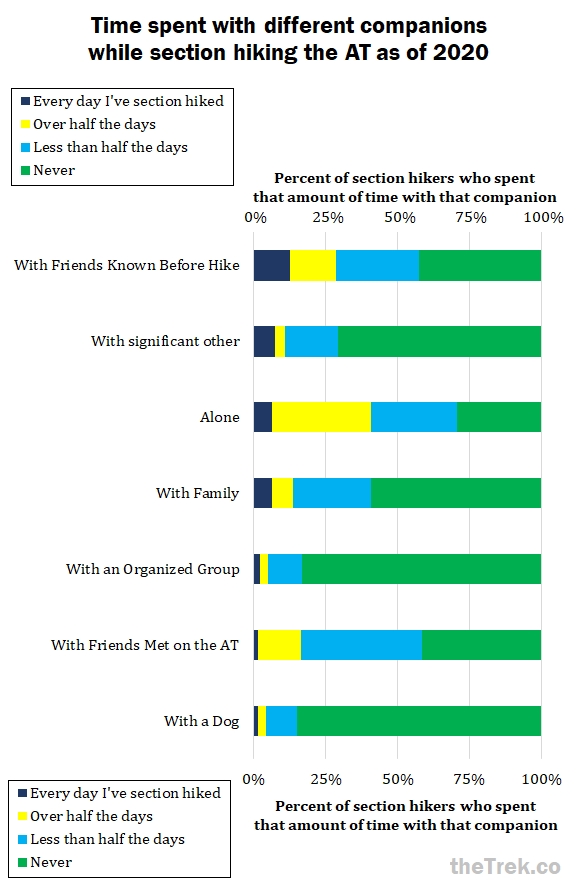 Section hikers spend the most days of their hikes, on average, alone. Hiking with friends from before the AT or friends met on the AT is also common. 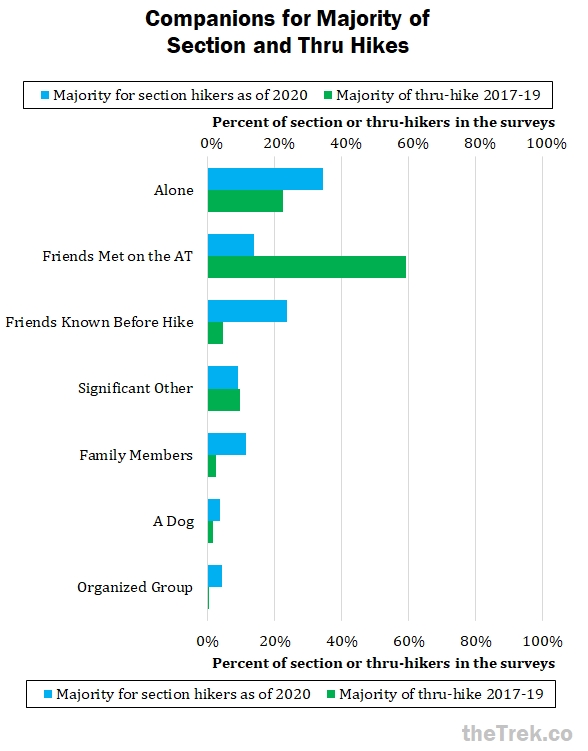 On average, thru hikers were somewhat younger than section hikers. Section hikers who had finished were, on average, older than those in progress, which makes sense considering that they would have spent more years hiking more miles, on average. 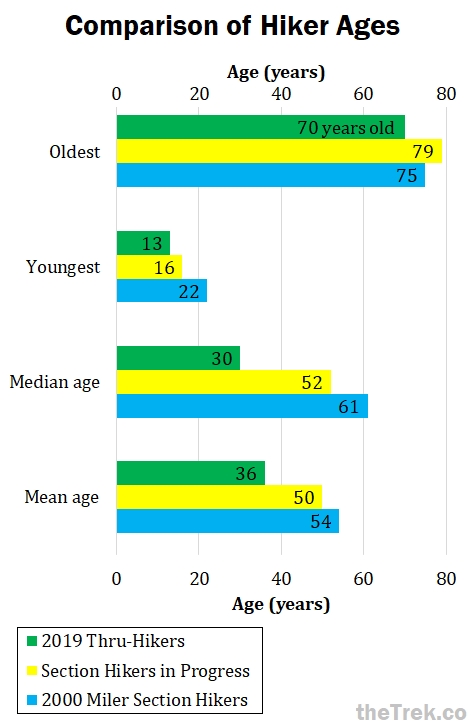 Compared to last year’s thru-hikers, section hikers were similar in terms of race/ethnicity, gender, biological sex, as can be seen in the next three graphs. Where they differed was nationality. 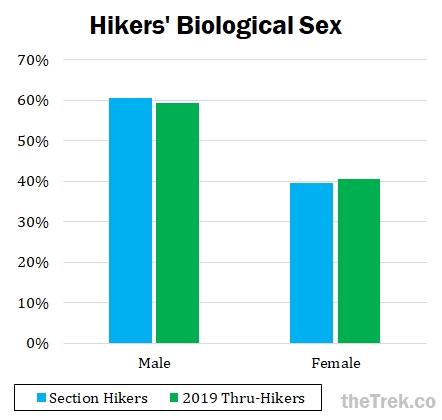 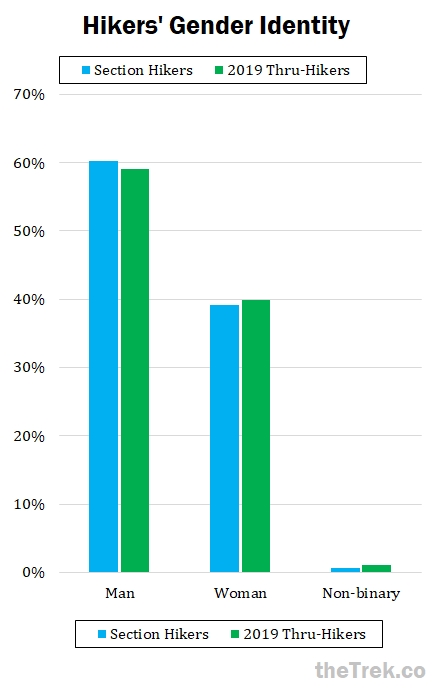 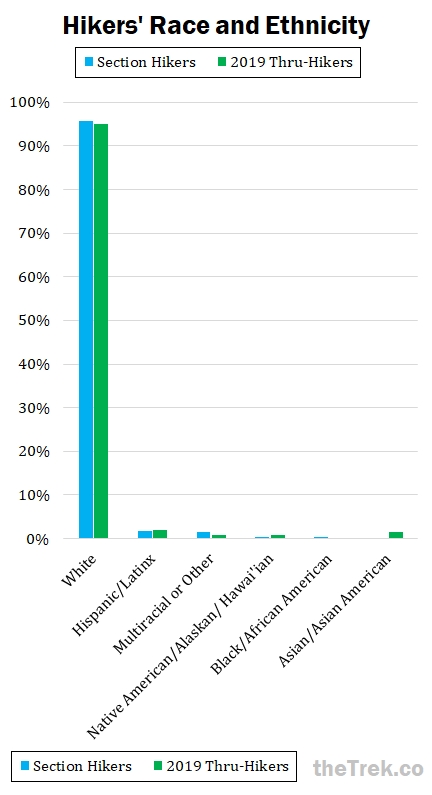 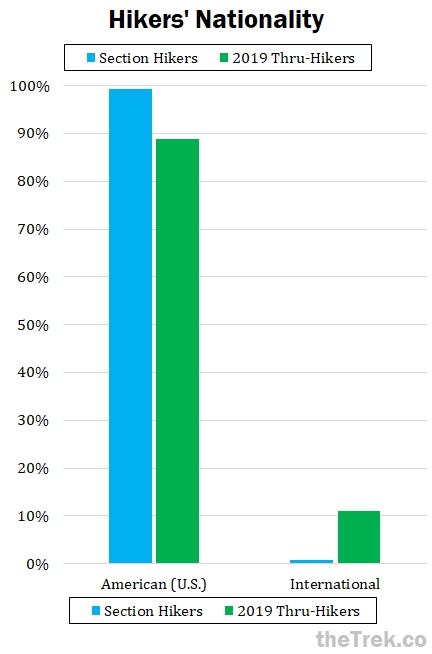 Only three section hikers in the survey (0.7%) were from countries other than the United States: one each from Bermuda, Canada, and Germany. In contrast, a significantly higher percent of thru-hikers last year were international.2 They comprised 11% of 2019 thru-hikers, representing 17 countries outside the US. It makes sense that section hikers are more likely to be American, because the cost of multiple trips to the U.S. would make section hiking much more expensive than thru-hiking for international hikers. 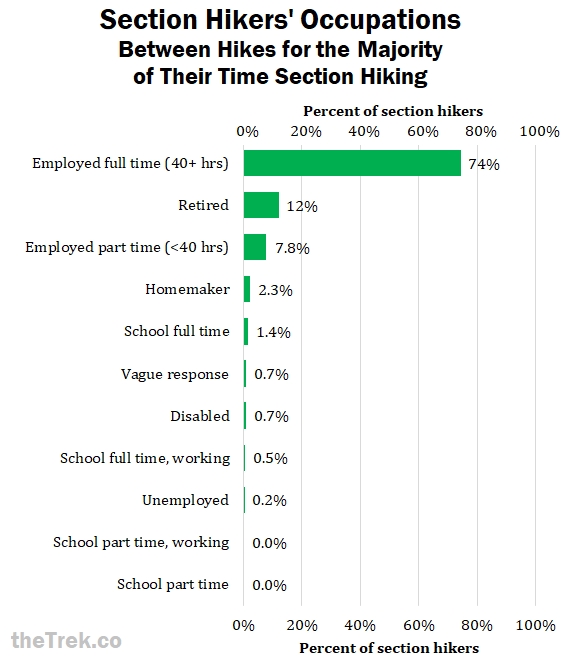 A Personal Note on Race and Gender

This post was not as time-consuming as most survey posts have been for me to write, so I’ve had more time to sift through some thoughts that are on my mind every year when I write up the hiker demographics.

One of the most widely-cited findings of our surveys is that the AT hiker community is very White. And every year, a couple of responders to the surveys write in angry or sarcastic comments, instead of their actual race or gender (especially since we started asking both biological sex and gender identity). I never include these inaccurate responses in the statistics and charts. I usually try to ignore them and focus on the more worthwhile, useful responses provided by the vast majority of survey responders.

But as a (light-skinned) Latina, every year, I feel awkward reporting the race and gender results. It’s disheartening to describe the typical hiker, as objectively and quantitatively as possible, when I don’t personally represent that typical hiker.

I remember the anxiety I felt at the start of my 2014 thru-hike, when I thought I was going to be alone communing with nature, and instead I was surrounded by men. Mostly at the start, before I knew anyone, I remember feeling like I didn’t fit in, I didn’t belong. As a child, I had resented that I couldn’t go camping once a month like my Boy Scout friends; when I realized how many thru-hikers learned backpacking skills from the Boy Scouts, I felt resentful again.

Still, the further I hiked, the more I saw that the White men surrounding me were more kind, trustworthy, and empowering than the average man I knew off the Trail. Probably age and life experience have something to do with this (I was 22 when I thru-hiked), and I also think the AT thru-hiker lifestyle selects for certain positive character qualities, like perseverance and environmental values. Additionally, I think the Trail teaches all of us along the way, for example teaching us anti-materialism and humility. The fact that so many of these White men became dear friends, became my “tramily,” is partly why I feel so uncomfortable expressing that, sometimes, I don’t feel like I belong in the backpacking community. And that the feeling of not belonging resurfaces whenever I make these charts on race and gender.

To reiterate, my discomfort is NOT because of the personal character of the White men I knew on the AT. My discomfort is from wishing more people like me had the privilege to experience the profound wonder, delight, and personal growth given to me by the Appalachian Trail. Slowly but surely, the AT community is becoming more diverse, with women representing 45% of hikers in 2019, compared to 37% in 2014. I have to believe that one day, when I am tabulating the demographic results for these surveys, I’ll get to report more diversity. 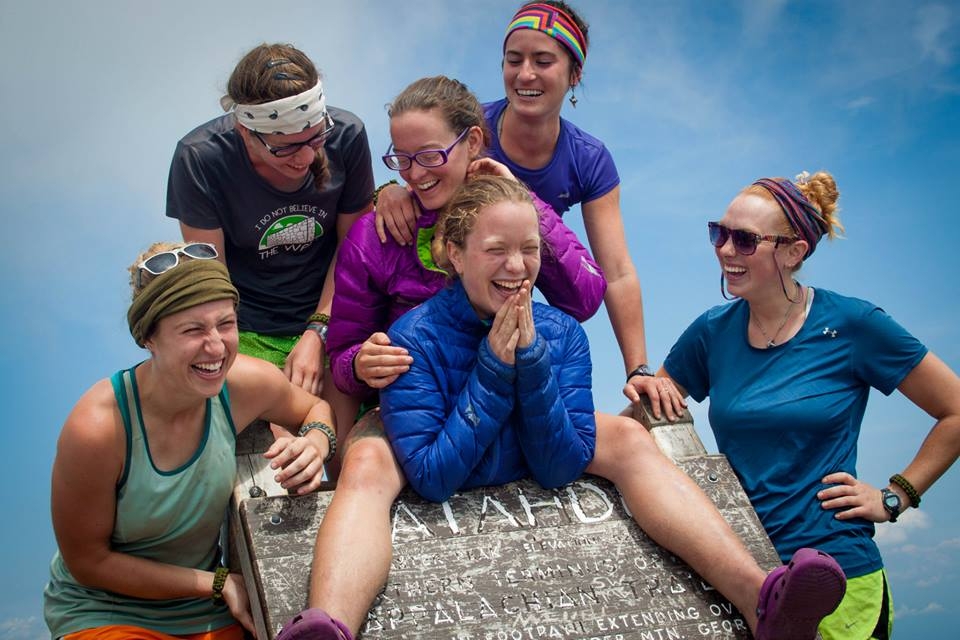 The end of my thru-hike with five other women in my trail family. Photo credit: “Texaco” Ryan McKee

Many thanks to the section hikers who completed our survey and shared this valuable information, which will help prospective section hikers prepare! I have so much respect for the hikers who had to cut their thru-hikes short due to injuries and/or the COVID pandemic. For those whose hikes are still in progress, I wish you the very best and happy trails! For the 2000 milers who have completed their hikes, especially those who have persevered in this goal since the 1970s, CONGRATULATIONS! You are an inspiration!

This is the second of (most likely) four posts in a series on the data we have from our 2020 survey of section hikers. Check out the first post here. Subscribe to The Trek newsletter if you want to be updated on when the rest of the series is posted. Additionally, this is the first time we have focused our survey on 2000 miler section hikers. As a former thru-hiker, I am less familiar with that experience so I’ve finished this post wondering about more questions than I typically have. Please comment below if you have other ideas on questions to ask section hikers or to share the reasons you chose to pursue hiking the entire AT in sections. I’m especially curious about reasons hikers did not want to thru-hike and would love to get more detail on this in future surveys.