Long overlooked in our annual surveys, Appalachian Trail (AT) section hikers were the focus of this year’s survey. We surveyed 448 people, 34 of whom had completed the entire AT in sections, i.e. become “2000 milers” in over a year, and 414 who were in progress working towards this goal. This post focuses on the logistics of section hiking, like trips per year and how long section hikes usually take. For the nuts and bolts, keep reading, or else skip to the TL;DR at the bottom.

Four hundred ninety-eight hikers completed our survey. Of these people, 34 hikers in the survey had completed the entire AT, or become 2000 milers, by hiking it in sections. Four hundred fourteen hikers were attempting to complete the AT in sections but had not finished it yet. Hikers who had completed a section with no intention to complete all 2000 miles (59 of them) were not included in the rest of the analysis below. Quick note: from here on out, whenever I refer to “section hikers,” I mean people who have hiked or are in progress towards hiking the entire AT in more than one year.

We asked hikers the main reasons they decided to complete the AT in sections instead of thru-hiking. Respondents had the option to select multiple reasons and to write in their own. 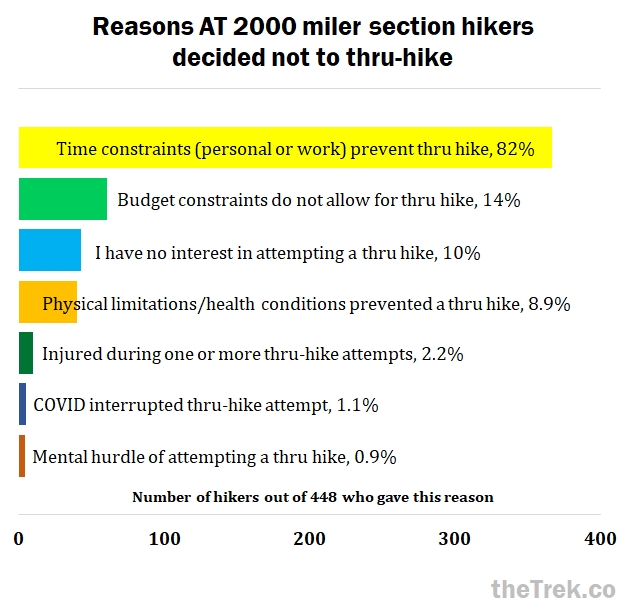 By far, the main reason 2000 milers and aspiring 2000 milers decided not to thru-hike was time constraints due to personal or work reasons. As our research on trends over time has shown, the typical budget for a thru-hike has drastically increased in recent years, and budget constraints were cited by 61 hikers as a reason they are doing it in sections.

Many hikers did not want to thru-hike or had not decided. Most of these hikers checked the box for our written response “I have no interest in attempting a thru hike” but some softened our language, saying they had not decided or were not sure. Common reasons given were that these hikers wanted to go at a slower pace or “not feel rushed” in order to immerse themselves in the experience more fully. Similarly, many mentioned they enjoyed having time on the AT every year. One section hiker mentioned they section hike on their anniversary with their partner each year, and others said they section hike with family members.

Physical limitations or health conditions prevented 40 hikers from attempting a thru-hike. An additional 10 hikers said they were injured during their thru-hike attempt, some more than once. Some mentioned the pace of thru-hiking, specifically, kept them from attempting again, while others implied that they did not want to re-do the sections they had already completed.

Unfortunately, several hikers injured in earlier years of thru-hike attempts were foiled again in 2020, this time by the coronavirus pandemic. In total, five hikers decided to section hike because the pandemic intercepted their planned 2020 thru-hike. (Most of the hikers excluded from further analysis had attempted a thru this year which was cut off by COVID. Unless they planned to complete the AT in sections in the future, they weren’t included in the rest of the analysis.)

Four hikers explained that they were not mentally ready for a thru-hike, and many of the others who said they did not want to thru-hike may have felt the same way. 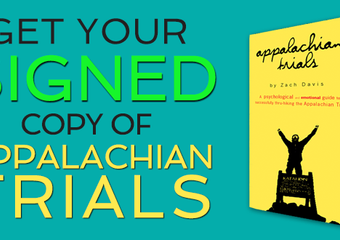 For the 34 hikers who had completed the entire AT in sections, their total number of trips ranged from three to 170, with 24 trips taken on average. Put differently, successful 2000-miler section hikers completed sections averaging from 13 to 733 miles and the typical trip spanned 92 miles.

I had wondered if hikers who lived closer to the trail did more, smaller sections while hikers living further away did fewer, longer sections. Based on proximity to the trail in miles, for the majority of the time they had been section hiking, there was no difference in the number of trips or length of trips. 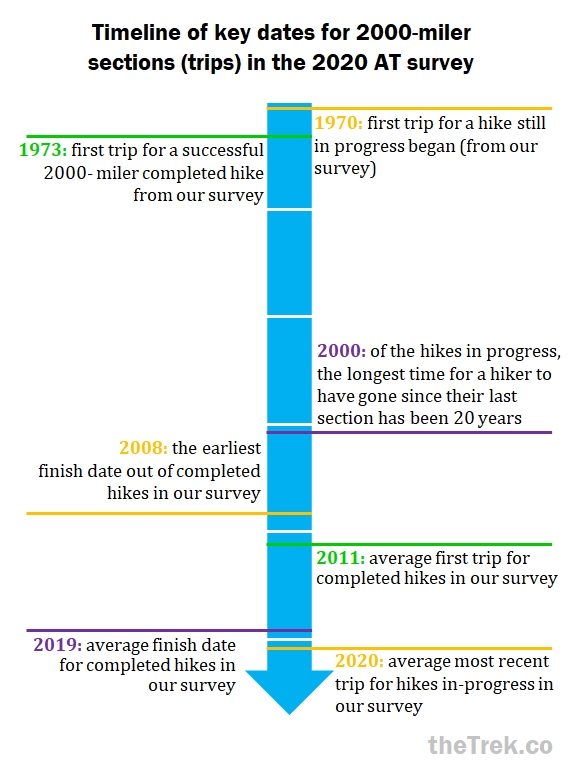 I thought it would be interesting to learn the years that hikers in our survey had been on the AT. Of course, this timeline does not represent averages for all section hikers ever, considering that Myron Avery famously became the first 2000 miler/section hiker in 1936. I think the amount of time is probably more informative than the exact years.  For aspiring 2000 milers, perhaps the most useful information we have on years of hiking is that the average time to complete a section hike, from first to last trip, was 12 years. The shortest time was just over one year (just outside the thru-hike range) and the longest was 41 years.

For hikers whose trek was in progress, the miles they had hiked so far ranged from five miles completed so far to 2200 miles. I’m not sure why the hikers who had done over 2190 did not mark themselves as having finished. It’s possibly due to the length of the trail changing from year to year, or due to hikers including the miles it took to get back on and off the AT. For hikes still in progress, the average amount completed so far was 664 miles.

Average miles hiked per year ranged from less than one mile to 1259 miles, with the typical section hiker completing 154 miles of the AT per year on average.

The section hikers in our survey estimated the average miles per day they hike for their AT section hike, including zero and “nearo” days. The lowest average given by a hiker was 2.5 miles per day and the highest was 23 miles per day. Of the ten hikers who averaged 20 miles per day or more, nine were aspiring thru hikers and one had already thru-hiked the AT.

On average, section hikers in our survey hiked 12 miles per day. In comparison, when we surveyed thru-hikers about miles per day in 2019, 2018, 2017, and 2016, they have averaged 15-17 miles per day. In those surveys, uncompleted thru-hikes averaged 12-14 miles per day. This fits with what some section hikers in this year’s survey shared about physical limitations preventing thru-hikes, or about choosing to section hike because they were injured attempting a thru-hike. Likewise, it fits with what some hikers shared about wanting to take more time to enjoy their surroundings without feeling rushed. Twelve miles per day is still a long day of hiking, especially without the months that thru-hikers have to build up strength. As someone whose thru-hiking “trail legs” are long gone, I am definitely impressed by the perseverance of hiking such long days without them!

We asked hikers to estimate how many days they typically hike per trip. The average was 16 days and the median was six days, with estimated typical trip lengths ranging from one to 660 days. 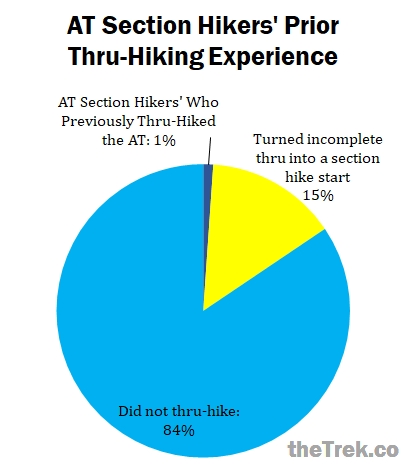 Thru-hiking and then section hiking the entire AT appears to be rare: only five people in the survey (about one percent) had previously thru-hiked the AT before their complete or currently in-progress section hike. Thirteen percent of hikers (57 people) had attempted a thru-hike which they later adapted to a section hike. 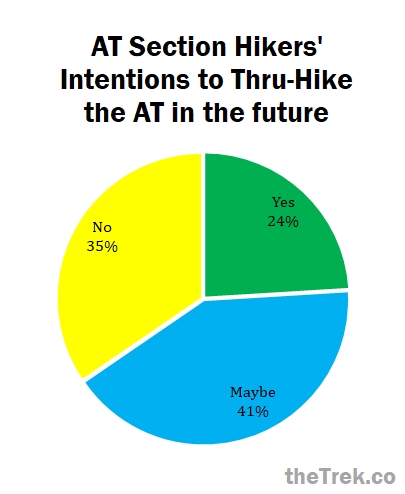 In contrast, some 24% of section hikers said they intended to thru-hike in the future, while 41% said they might attempt a thru-hike. Considering this data and the fact that only about 20% of attempted thru-hikes are successful, it seems rare for anyone to both thru-hike AND section hike the AT, in either order.

Regions of the AT 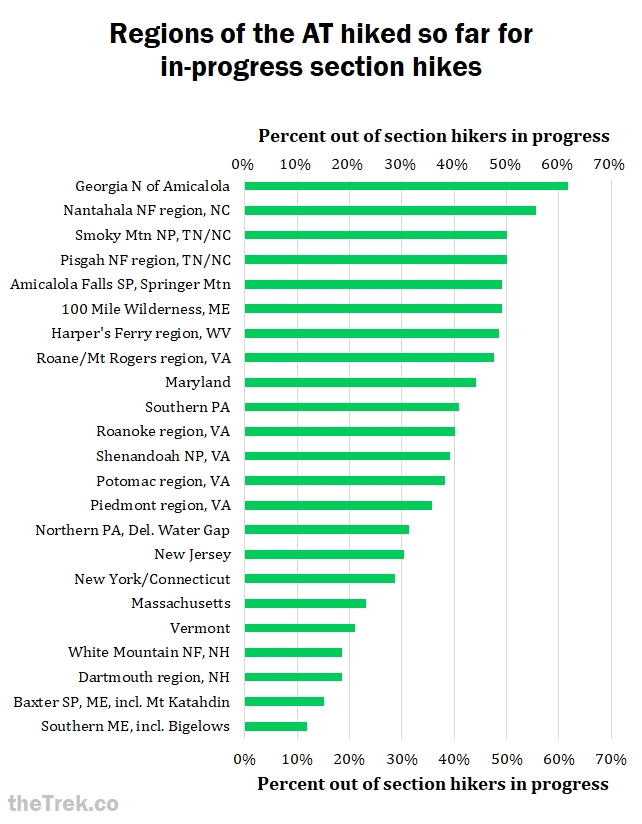 The region completed by the most section hikers was Georgia, north of Amicalola Falls State Park, the location of the AT’s Southern Terminus: Springer Mountain. It was a bit surprising to see that more hikers had completed Georgia north of the Terminus than had completed the Terminus itself, considering 13% of hikers had turned an incomplete thru-hike into a section hike, and most thru-hike attempts (and completed thru-hikes) begin at Springer Mountain. I wonder if section hikers are saving the Southern Terminus for the end, for symbolic reasons, or if it is because Springer Mountain is more challenging to access than other sections of the AT. I would love to hear in the comments from section hikers who hiked the rest of north Georgia before the Amicalola area about why you chose this order.

The second most commonly completed region was Nantahala National Forest in North Carolina, followed closely by the Great Smoky Mountains National Forest in Tennessee and North Carolina. The least traveled region by section hikers in progress was the AT’s Northern Terminus, Mt. Katahdin, in Baxter State Park, Maine. Some hikers may be completing the sections in order from south to north, and others might be saving this location for the end due to its significance and symbolism. The sections completed by more hikers roughly correspond to the easiest sections of the AT. The sections saved for later roughly correspond to the most difficult. Other than northern Georgia, the earliest and latest sections are also among the favorite regions of thru-hikers. So section hikers seem to have both practical and meaningful reasons to order their hikes as they do.

We asked hikers to indicate which seasons they hiked AT sections, from most time spent to least time spent hiking during that season. 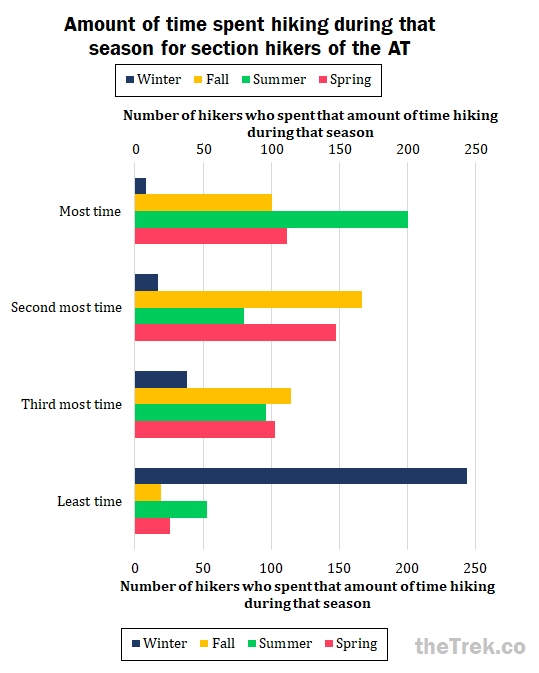 Section hikers spend the most time on the AT in the summer, followed by fall, spring, and then drastically less time in winter. Keep in mind this is on average, and 11 section hikers actually did most of their hike in winter.

Many thanks to the section hikers who completed our survey and shared this valuable information, which will help prospective section hikers prepare. I have so much respect for the hikers who had to cut their thru-hikes short due to injuries and/or the COVID pandemic. For those whose hikes are still in progress, I wish you the very best and happy trails! For the 2000 milers who have completed their hikes, especially those who have persevered in this goal since the 1970s, CONGRATULATIONS! You are an inspiration.

This is the first of (most likely) four posts in a series on the data we have from our 2020 survey of section hikers. Subscribe to The Trek’s newsletter if you want to be updated on when the rest of the series is posted. Additionally, this is the first time we have focused our survey on 2000 miler section hikers. As a former thru-hiker, I am less familiar with that experience so I’ve finished this post with more questions than I typically have.

Please comment below if you have other ideas on questions to ask section hikers or to share the reasons you chose to pursue hiking the entire AT in sections. I’m especially curious about reasons hikers did not want to thru-hike and would love to get more detail on this in future surveys.