Ooops, it’s been a minute since I posted part 1 and tempted you with promises of trail magic and trail names. Then I got caught up in finishing teaching and knocking out my master’s defense like a rock star.

So, last time I checked in I had just gotten off the trail at Neel Gap to head into Franklin for the rest of the week. This trip marked 106.6 miles of trail completion. I’ve still got a couple of small sections in GA to hike to have completed everything up to NOC. I may get to them before my start date, or I may have to finish them after I return, but I live around here so getting them done won’t be a problem.

I met up with my buddy in Franklin the following day and had a whirlwind of a time shuttling him and his friends around Franklin for the next few days. 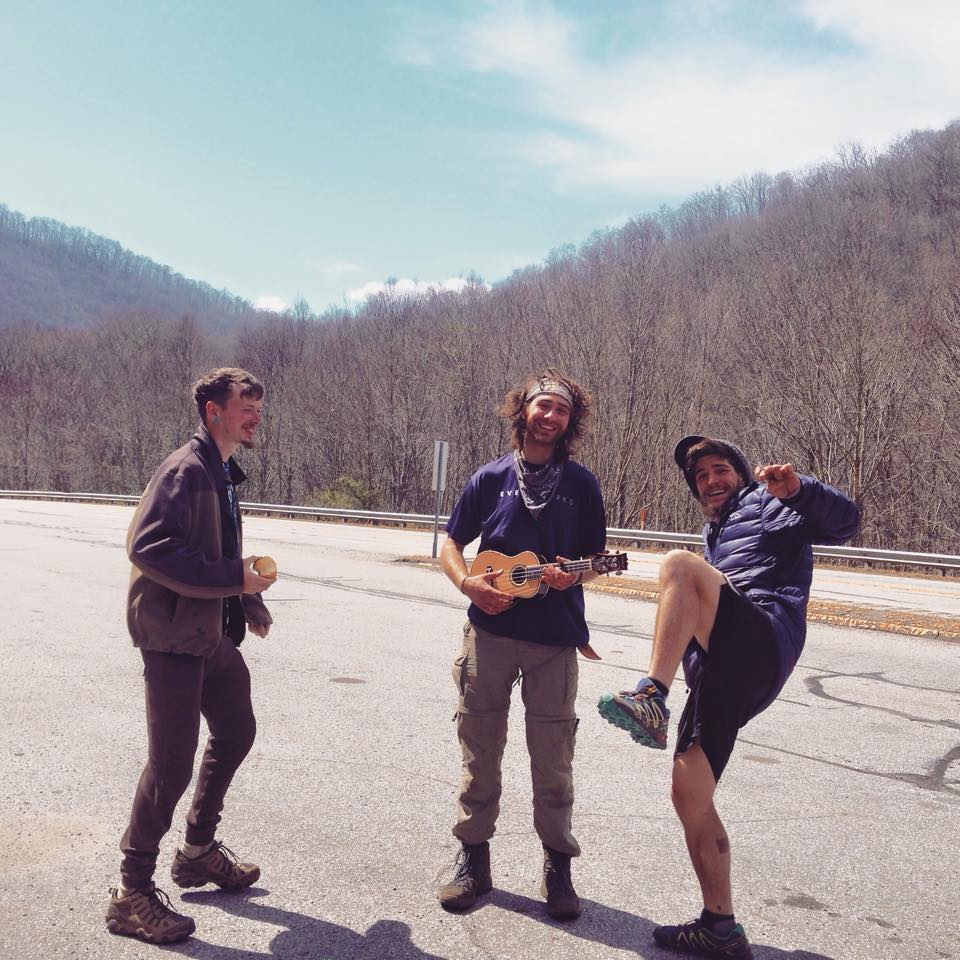 I planned to pick Jacob up at Winding Stair Gap the day after I got off the trail. Since I’d be there waiting, I decided to set up some mini trail magic. I took apples, bananas, and PBR out and ended up surrounded by a group of about 15 hikers, including these three vibrant characters: Wild Turkey, Jedi Bear, and Young Gun. They kept me entertained while I waited! 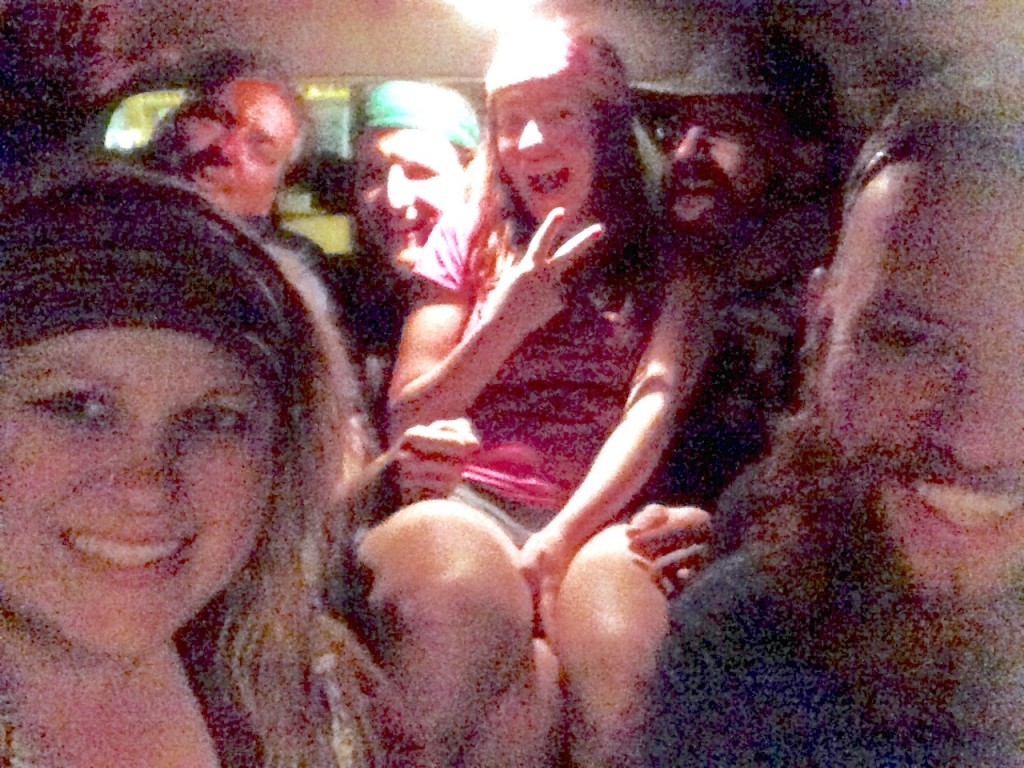 Poor quality photo, but it perfectly captured the evening! Jacob and I (right and left front, respectively) spent the evening hanging out with these cool folks at Mulligans in Franklin, then gave them a ride back to the hotel. I can’t remember all their trail names, but we had a blast nonetheless!

I dropped Jacob off at WSG early Thursday morning, April 2nd (his birthday). I planned to spend the rest of the week doing trail magic with friends, so I set off to start planning! Friday morning my friends Lauren, Lorraine, and I gathered our things and set off to Tellico Gap with a car load of pizza, beer, baked goods, chips, soda, and fruit. A couple nights before I had met a group of girls at Sapphire Inn in Franklin who I had mentioned the possibility of trail magic to, and it was really cool that when we arrived at the Gap, there were about 10 hikers there waiting for us, including some of those girls! I knew they were vegetarian and had specifically brought a veggie pizza for them. It was pretty awesome. 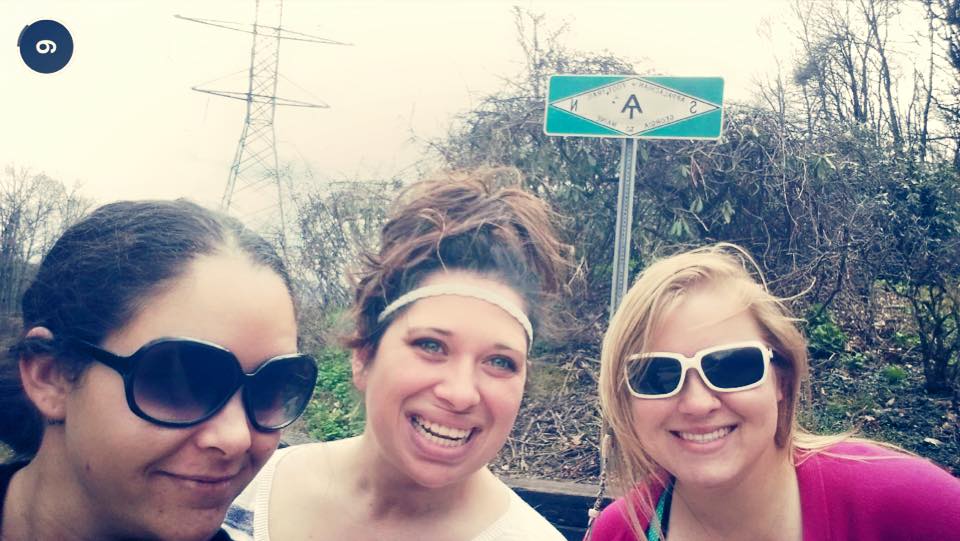 Lorraine, Lauren, and I, all smiles after making hiker’s days. 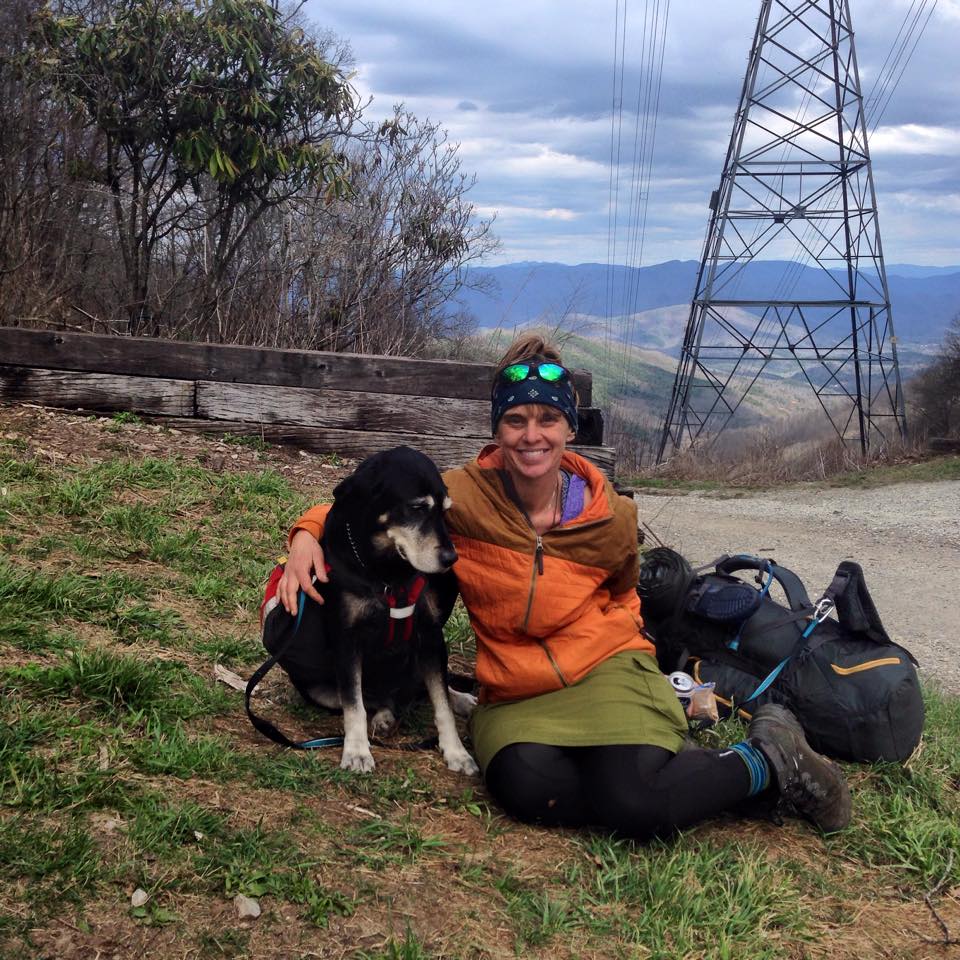 I met Evergreen and her dog, Karma, at Sapphire Inn in Franklin. Karma is 12 years old and going strong! Such a sweet pup. Evergreen hung out with us a while at the gap replenishing her calories with fruit and soda. As a vegan on the trial, she said she’s been struggling finding enough to eat. Her story was so inspiring. She sold her house and quit her job to hike the trail and live her dream. I would LOVE to follow her journey, but didn’t get her info, so if anyone knows here, leave a comment on where I can find her on IG or FB or a blog! 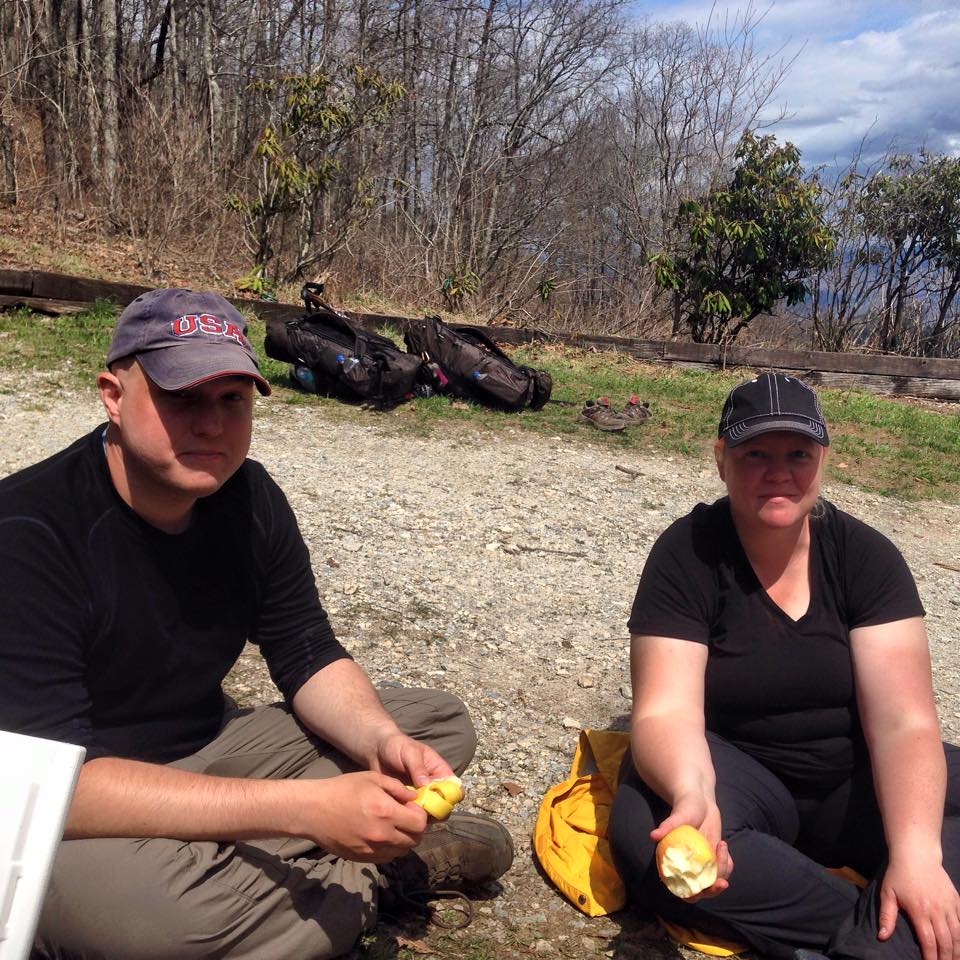 I was so inspired by these two! They were going strong 12 days in. Firefox someone managed to score a back massage from Lauren… trail magic at it’s best! 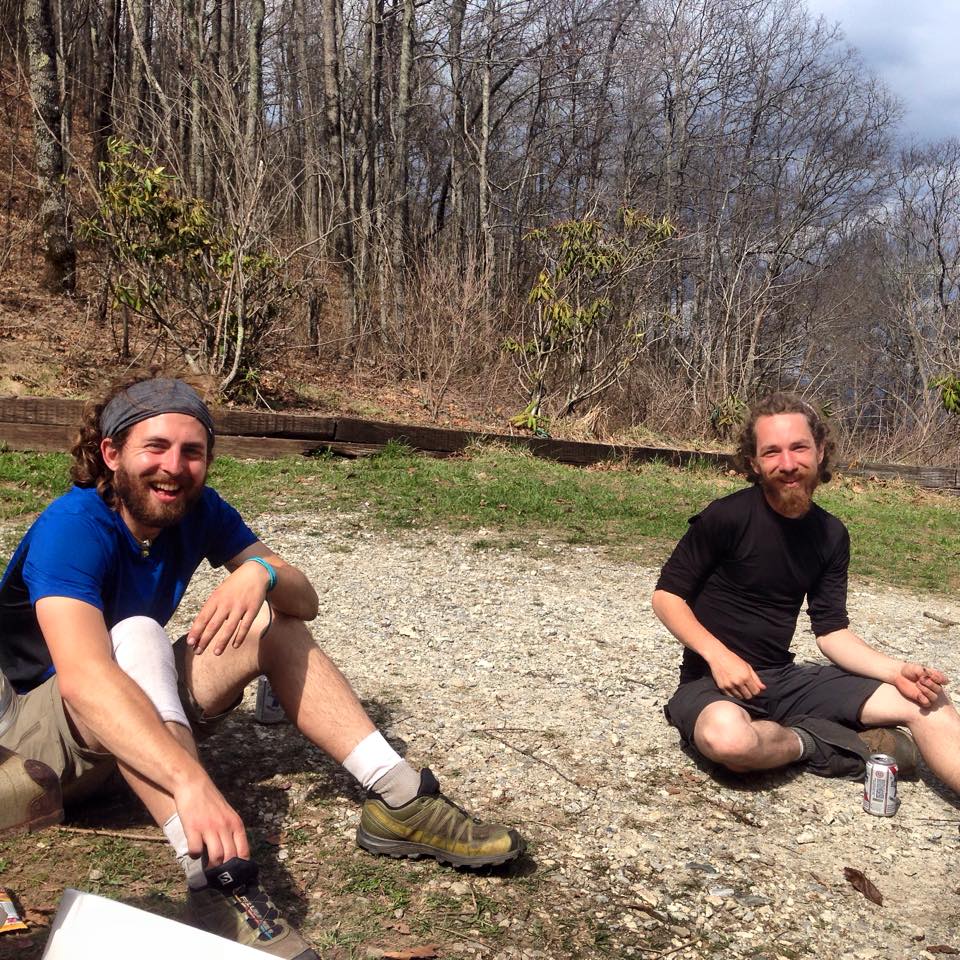 These two, Spaghetti and El Mundo (I think) hung around for a while and entertained us. Part of the reason I love this trail community so much is that almost everyone you meet has a huge, vibrant personality and are excited to share their stories.

We (remarkably) had some pizza and beer leftover so we decided to set up again the following day at Winding Stair Gap. I’m not sure how we managed to have so much fun sitting around, but we had a BLAST. My friend Shannon joined us for part of the day as well and it made for great company. 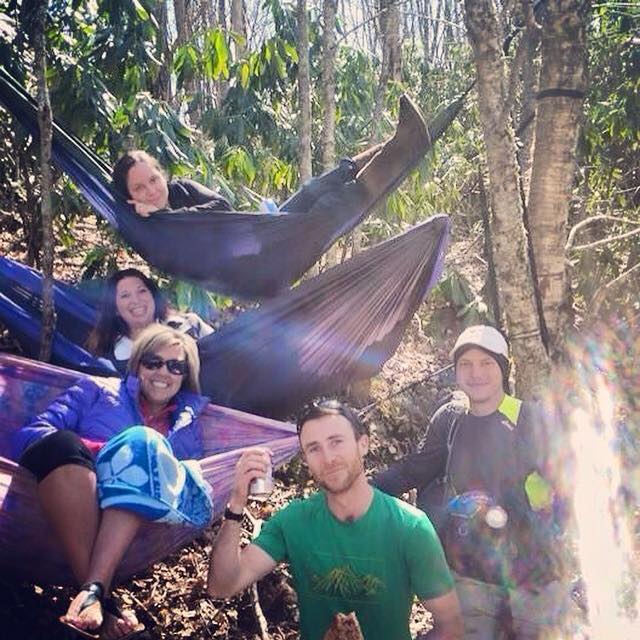 We set up hammocks at WSG while doing trail magic and had so much fun with them. We were referred to as “Tree Faeries” by a gal who stopped in with a guy, who I believe goes by the name of Lobsterman (he’s from Maine) who is slackpacking so he can “speed hike” as much of the trail as possible. The girl is supporting him by driving a car. The two guys in this photo were from Europe and were very motivated!

Lorraine, while attempting to climb a tree to hang a hammock, ended up awkwardly hugging the tree. Her dark fuzzy coat gave the impression of a small bear scuttling up a tree and she was dubbed “Tree Bear”. Lauren, after giving several hikers directions, info on local and not-so-local accommodations, and making phone calls to arrange for reservations for a group of hikers, was dubbed “Knowitall” by a gracious new hiker friend. I was prompted to accept the name “Tree Faerie” as my trail name, due to the fact that we were providing “magic” while hanging from the trees. It stuck around for a while but has since been changed. 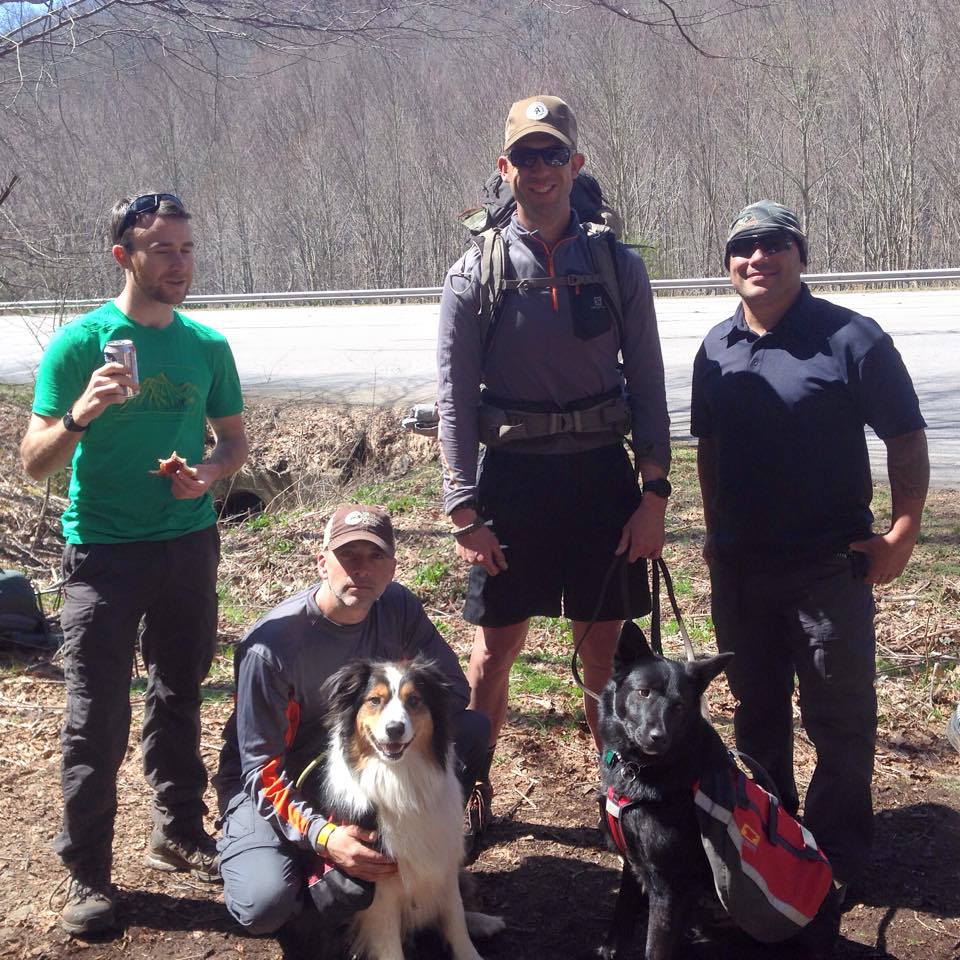 This is a group of some section and some thru-hikers who came through our trail magic with their two pups! Really cool guys. We heard later that they were very surprised by our “trail magic” and were telling everyone up the trail about how they couldn’t believe they were just walking in the woods and someone handed them pizza and beer!

After a full week spent surrounded by hikers and immersed into hiker culture, I had to go back to the “real world”. One week of student teaching, followed by my master’s defense, a teaching seminar, taking the GACE, then a conference the following week stood between me and the trail. As I type this, I’m once again sitting in Franklin after a weekend spent providing trail magic and shuttling hikers, waiting on May 1st to get here so I can get going!

I went out in Franklin on Thursday night and rounded up this group of guys. We ended up hanging out WAAAAAAY past hiker midnight but had a blast introducing them to Franklin.

Thursday night, my first night back in Franklin, I ran into some super cool guys at Mulligans. I offered them a ride home afterward, and we were stopped in the parking lot by Clay, a local. Clay is an amazing person that i’ve had the privelege of knowing for a couple of years. He invited us all back to his house for smokes, cheese, wine, and fruit – successfully turning hiker trash into hiker CLASS. Pictured left to right: Lucky Charms, Clay (in back), Kaleidoscope, The Confederate, G.I. Joe, and Jumanji.

Hanging out with the above group, I told them that my trail name was “Tree Faerie” but I wasn’t sure it was going to stick. Conversation turned back to this topic before we left, and they told me that I wasn’t just a tree faerie, I was a TRAIL faerie. They were just sitting at a bar when “poof!” I appeared bearing magic… and so I was dubbed Tinkerbell. Which I think will stick, especially since they made me promise I would keep it. Thanks guys! I’ve also changed my instagram handle to @travelswithtink, so check it out if you haven’t already! 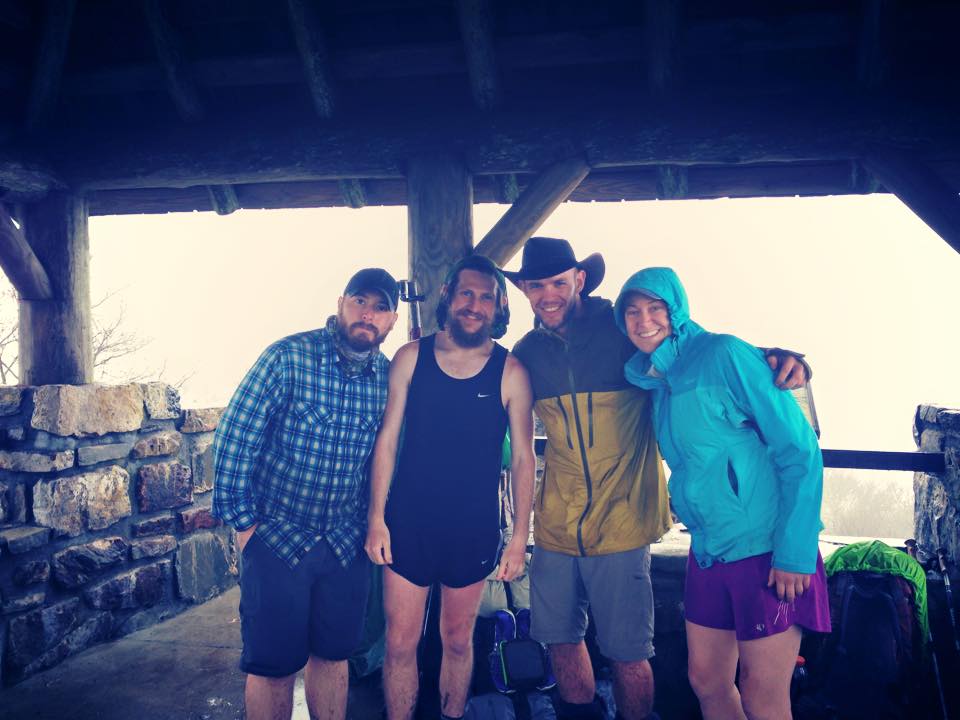 It has rained and rained and rained in Franklin. Friday Lauren and I decided to brave the rain and head up to Wayah to do some trail magic. We hauled a cooler up to the tower in the downpour and helped ease the rainy day blues for a few hikers. There was a couple up there who were on their 11th straight day of hiking in the rain. Then we rain into this group and they inspired us with their stories for hiking the trail. Left to right: Fiddler, Wizard, Detox, and Outro.

I wanted to hit the AT this weekend, but bad weather and being under the weather has kept me off the trail. Lorraine and I did make a short hike up to Pickens Nose, which is in Standing Indian Campground but NOT on the AT. We stopped and handed out some more trail magic on the way back, but it was raining so we neglected to take photos at that point. I’ll leave you with an amazing panorama of the view from the Nose. It’s a super cool trail if anyone is ever in the vicinity and wants to check it out. I’m trying to get onto the trail tomorrow if I can find a shuttle, and in 10 days I’ll be meeting new friend Katie Kronberg and heading up out of Fontana for a very long walk! 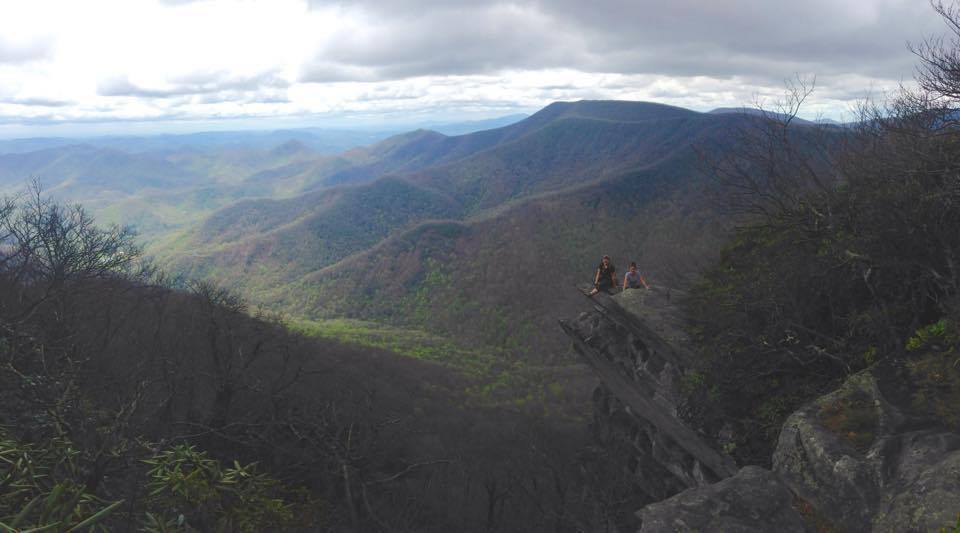 Not on the AT, but nearby. The moody clouds made for remarkable lighting and the photos turned out fantastic.