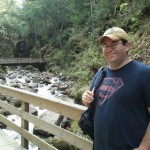 The adventures of Coin Flip and XL

I started my trip north after over a year of planning, preparation, and agonizing. The journey started out auspiciously with a ten hour drive to Harper’s Ferry from my home in Maine that ended up taking over 14 hours. We got stuck in a horrific traffic jam in NYC (found out later that he Tappan Zee Bridge had been shut down by an accident). I probably should have postponed a day so I wasn’t leaving on Friday the 13th. Live and learn.

The next morning I started out solo (my hiking partner Jeff joined me a few hours later) through Harper’s Ferry which is an incredibly beautiful place. Seeing those white blazes on lantern posts in this historical location was a great way to begin my journey. 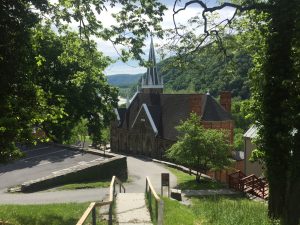 My elation faded a few hours later when the skies opened up and it rained. Hard. Jeff had joined me by that point and we worked hard to get through the rain and mud to the first shelter. We made it, there was still room. We met a whole bunch of people, both thru and section hikers and I was immediately impressed with camaraderie and willingness to share info, food, whatever they have.

A relatively sleepless night (sleeping in a shelter is a skill that you have to acquire I think) led to a hike to the next shelter in line, which was a bit tricky to find. We lost the blue blaze for a few and I managed to find a rock hidden under the leaves and twisted my ankle. Damn. That cut short our day. We set up for the remainder of the day and I rested my ankle.

I’m not going to cover all the days between then and now (we’re on day 6 and off trail in Waynesboro, PA. It was slow going for a few days. Lots of rocky terrain which is not kind to a sore ankle, but I survived. I had to swap out my pack, my original one was killing my shoulders. Luckily, I had family that was willing to be a trail angel and meet me with a new one from REI (thanks again, Aunt Sandi!)

Today was a good day. We did over 10 miles for the first time. I got my trail name (I’ll cover that below). We’re spending our first night off trail, so a shower was awesome. Now let me tell you what my impressions are so far.

This is hard. Harder than I expected. It’s not easy to leave everything you know behind and “go for a walk” as some of my friends refer to it. It’s not easy on my 40 year old body. My legs hurt all the time. I have grown to hate rocks already and we just crossed into PA. I have also come to love my trekking poles. They are the best thing I have as far as gear. I would probably be severely injured by now if not for them.

I have seen beautiful sites and I have met amazing people that are some of the warmest and most welcoming as anyone as I’ve ever met. We were lucky enough to spend the night at a shelter last night with 3 other hikers that had just started a flip flop. BBC, Ranger, and Tumbleweed were all great people that were just starting their journeys as well, so we had a lot of the same experiences.

Okay so about the trail names- as you probably saw the title of my post, we have them. Jeff is Coin Flip, cause he says it’s a coin flip whether we finish or not. He gave me my name today- XL. Works on multiple levels, since I’m not exactly a slim guy, heck, even calling me husky would be generous! But that’s quickly changing, my pants are already looser.

Okay, second reason it works is that I’m hiking in support of my local children’s hospital through a charity called Extra Life. Every mile I walk gives money to The Barbara Bush Children’s Hospital. If you’d like to support my quest you can click here. 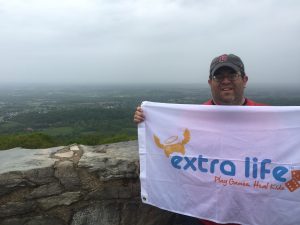 I’ll be updating as often as I can manage, so stay tuned!

Out of shape, 40 year old gamer, trying to have a little adventure. Starting in May of 2016, I'll be doing a flip-flop hike of the AT, to raise money for Extra Life, the children's charity. I'm a big fan of the following: Pizza, beer, sitting on my ass and binge-watching TV shows, and riding my Harley. I don't sound much like a good candidate for a thru-hike, do I? To support my quest for Extra Life, go to https://www.hikefor.com/Jamison/AT/2016