The Best Job on the Appalachian Trail: What It’s Really Like To Be an AT Ridgerunner

This is a guest post by Jim “Sisu” Fetig.

The synonym for an Appalachian Trail ridgerunner is “janitor.” They pick up a lot of trash. Yet being a ridgerunner is one of the most rewarding jobs anyone could have.

The job is worthwhile, hard, and fun all at the same time. More importantly, it’s a way to give back to the trail community: both hikers and the legions of volunteers who make it all possible.

Ridgerunner hiring for the 2023 season has begun. There are approximately 35 ridgerunners who cover territory from Georgia to Maine. The ATC southern region— Georgia and the Smokies— hires earlier than the rest of the trail. The remaining regions post their jobs on the Appalachian Trail Conservancy (ATC) website around January 1. 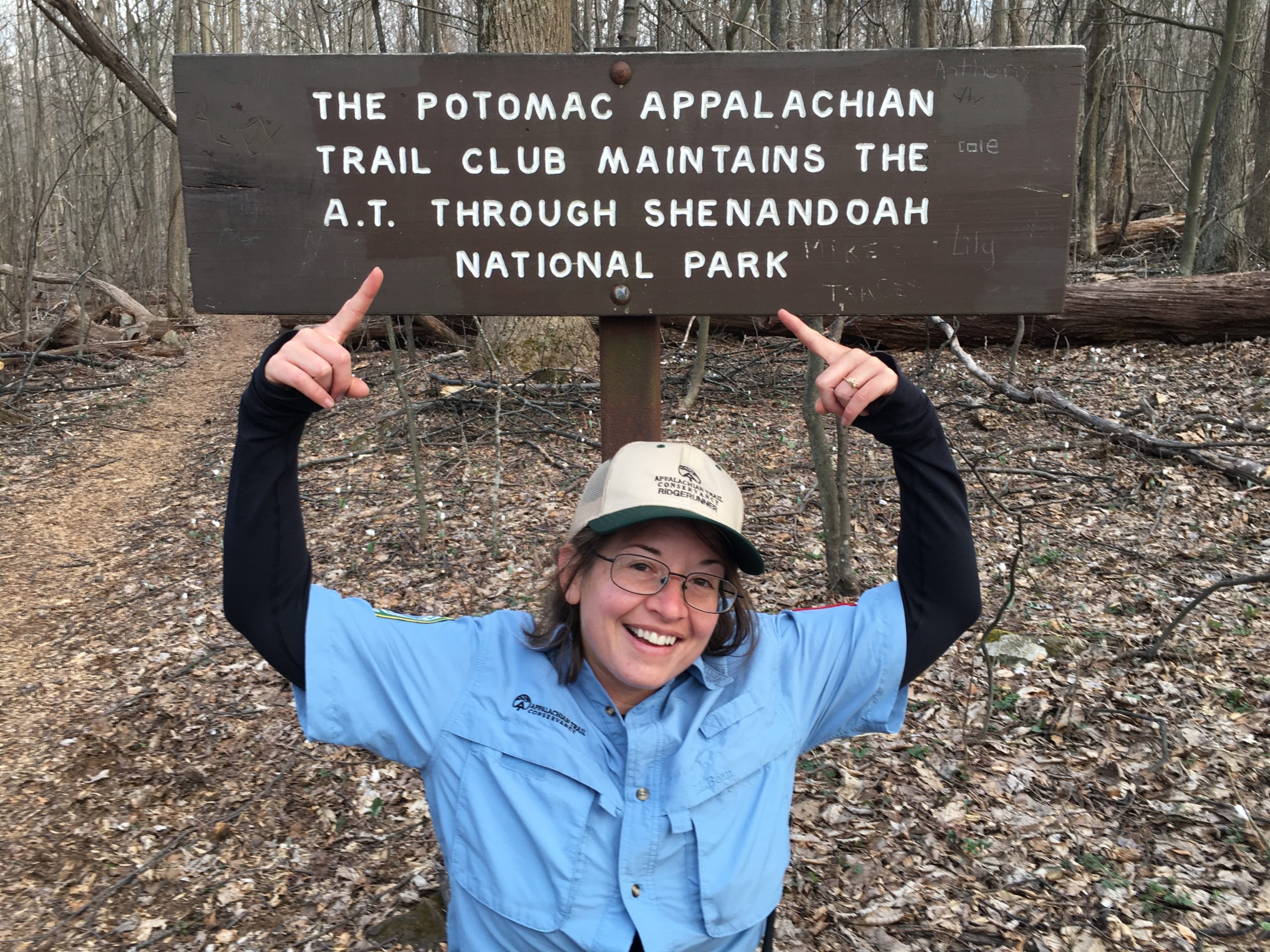 Some ridgerunners are employed directly by the ATC, while other are hired by maintaining clubs.

As a former ridgerunner responsible each season for hiring six ridgerunners for the Potomac Appalachian Trail Club, I invite you to consider applying to become a ridgerunner either with us or elsewhere. If you’re selected, you won’t be disappointed.

The people who become ridgerunners are as varied as the hiking community itself. Of some possible surprise, not every ridgerunner is a thru-hiker. The one characteristic they have in common is that they are expert backpackers who know how to live and function on the trail.

The age range varies from fresh graduates to people who have retired. They have come from far and near and from all walks of life: from funeral director to physicist and from factory foreman to firefighter. In our area, half have been women. Each is unique, but all are committed to serving the hiking community and the trail itself.

Successful ridgerunners have common characteristics on top of the ones already mentioned.

The job is first and foremost public facing, meaning that it requires excellent communications skills, tact, listening ability and willingness to engage hikers in conversation. 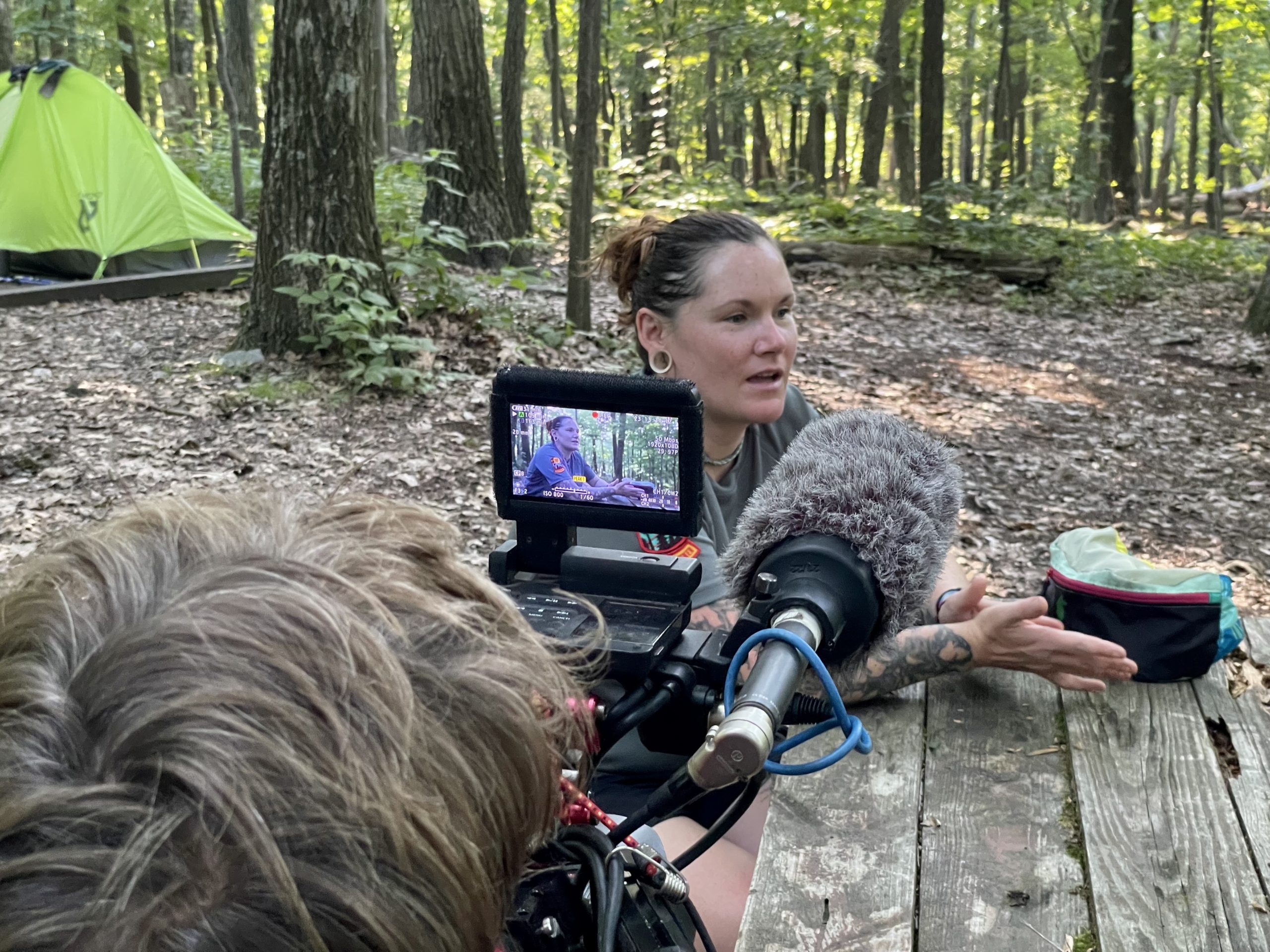 Ridgerunners also communicate in weekly reports, which include trail damage and blowdown locations, hiker counts, shelter and water status, and other topics about which the maintaining clubs and land managers want to know.

Ridgerunners interact with all kinds of people, a few of whom are under some level of stress. They must be mature and poised enough to respond properly to any situation or set of circumstances.

The job doesn’t feature a lot of direct supervision, so those selected must have the commitment to the mission and the perseverance to go the extra mile and do the right thing when nobody is looking. 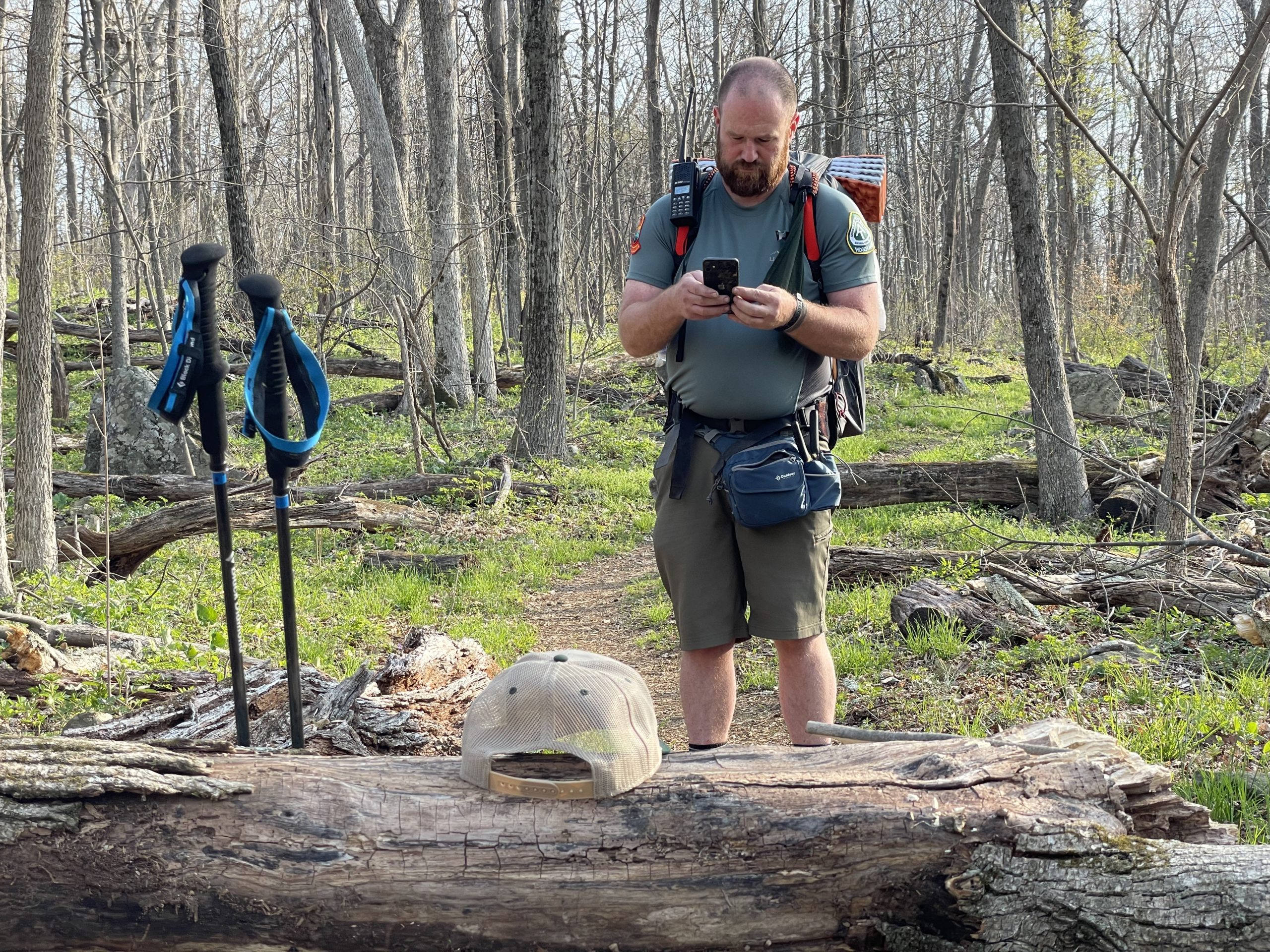 John preparing to report a blowdown across the trail.

They must have the ability to successfully meet challenging and changing circumstances in non-ideal situations. Many carry radios connected to a dispatch center, but not all.

Some trail locations lack cellular service, so it’s not always possible to call in for advice when something pops up. That’s when you rely on your training, take the lead, and figure it out.

Ridgerunners receive five days training including certifications in Wilderness First Aid, CPR and Leave No Trace. They also are taught how the Cooperative Management System—the relational roles of the National Park Service, the ATC, and the individual maintaining clubs—works. 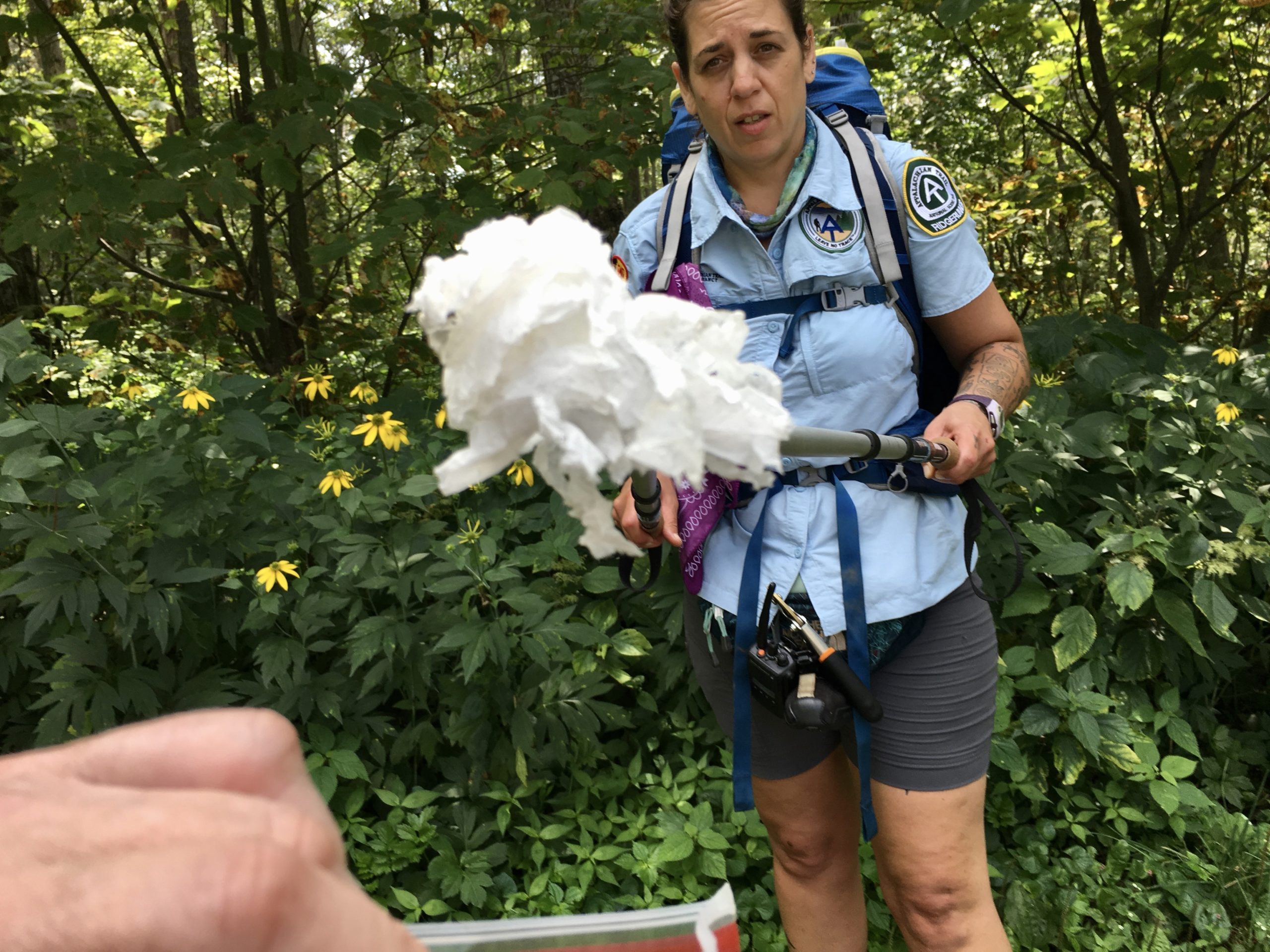 Mary Thurman collecting TP tulips on the AT in Shenandoah National Park.

As Karen Lutz, retired ATC Mid-Atlantic regional director used to say: “It’s just a simple trail.” Not! There are a lot of actors with a piece of the action from federal, state, and municipal governments to nonprofits and other nongovernmental organizations.

An experienced supervisor also hikes each ridgerunner’s first patrol with them, coaching as we go. We want them to be fully confident when they solo.

Ridgerunner seasons vary by club and geographic location. Obviously, Georgia and Maine have different timing. We have one season that begins April 1, running through Halloween. However, most of ours run from just prior to Memorial Day through Labor Day.

The average ridgerunner week is five days on trail with days off during the week. The mileage patrolled during that time averages 50. 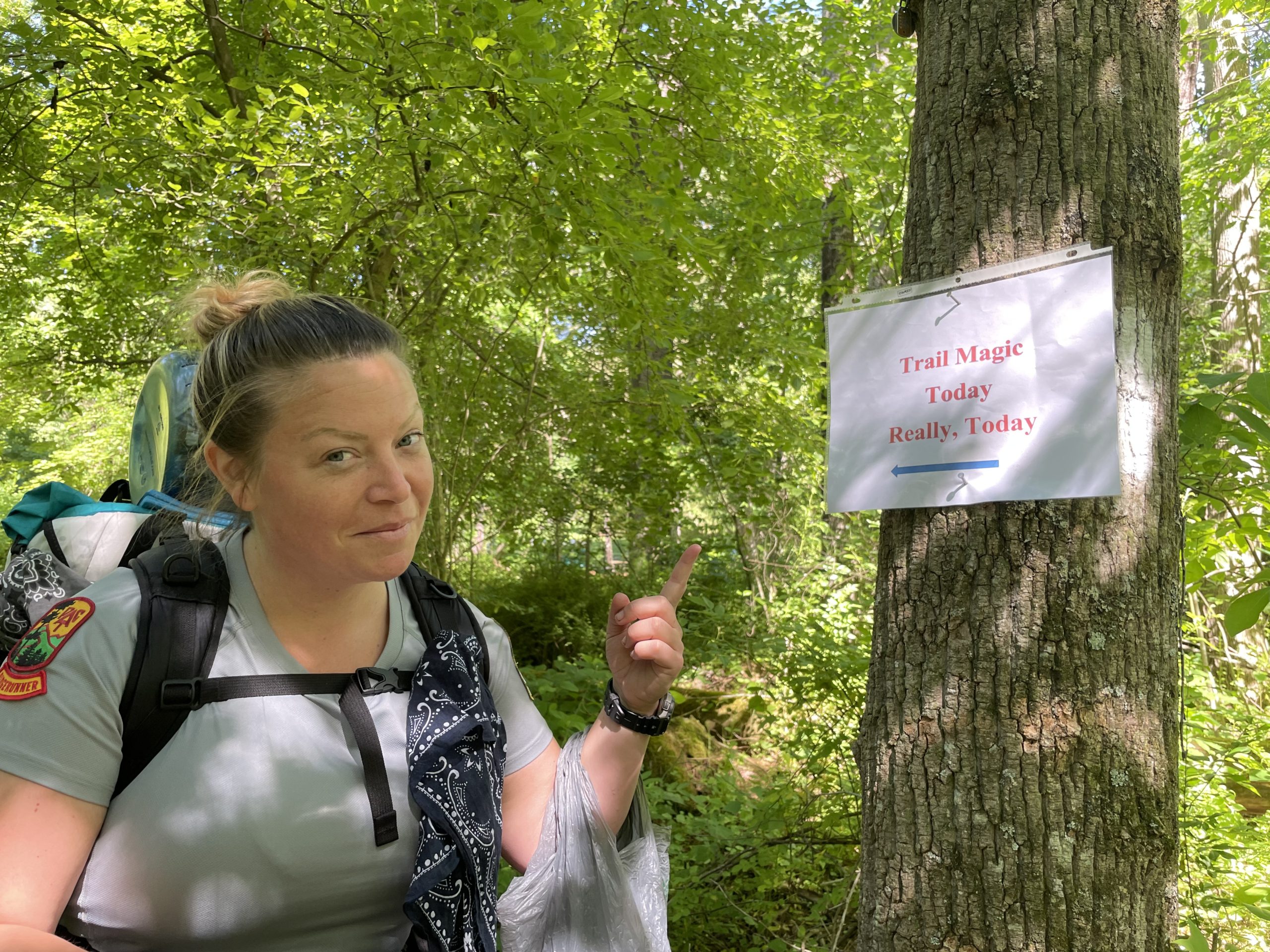 There is a common misperception that ridgerunning is about hiking.

In fact, ridgerunners don’t hike that many miles. Their time is used caring for shelters and privies, checking log books, picking up trash, breaking up illegal fire rings and rock stacks, talking to hikers and talking to more hikers, photographing blowdowns, noting other needed trail maintenance, and rendering first aid if necessary.

Here’s where the rewarding part comes in.

Early this season, one of our Maryland ridgerunners found a day hiker with a bloody face and arms. He had faceplanted after tripping on a rock. We stopped his nosebleed, put him through concussion protocol, checked for fractures, cleaned him up, and bandaged what we could. His friends then helped him hike back to the trailhead. 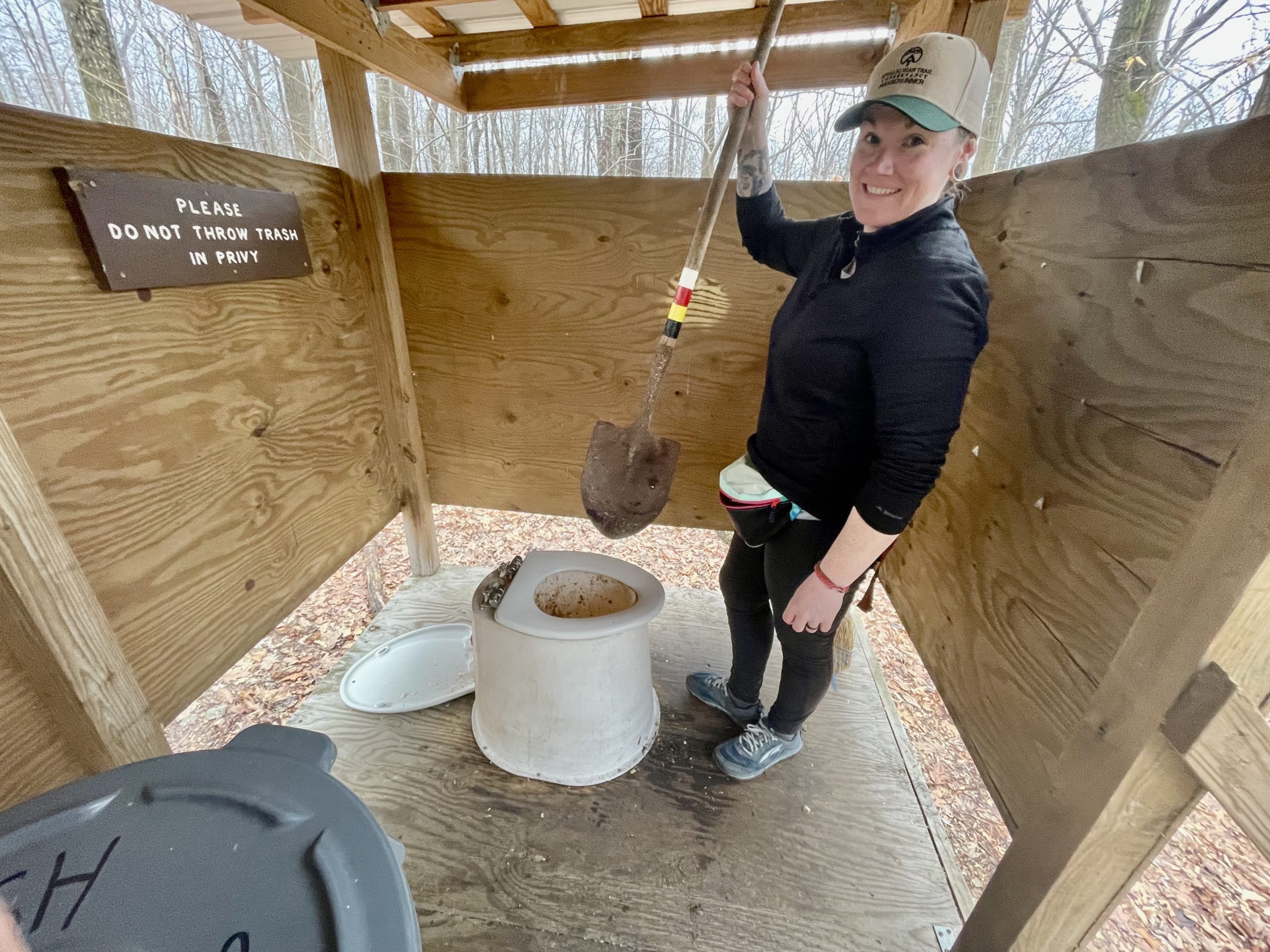 In mid-summer, our ridgerunner in Pennsylvania ran into a thru-hiker who was struggling. In conversation, we learned that the hiker thought she wasn’t eating enough when in fact she wasn’t drinking enough water. We talked to her, gave her water, and made friends.

That small conversation helped her successfully reach Katahdin. When she did, one ridgerunner and her supervisor were cheering like crazy for our intrepid new friend.

As this is written, a few SOBOs are still on the trail, but not many. By this time most hikers have figured out what’s next for them, but not everyone. 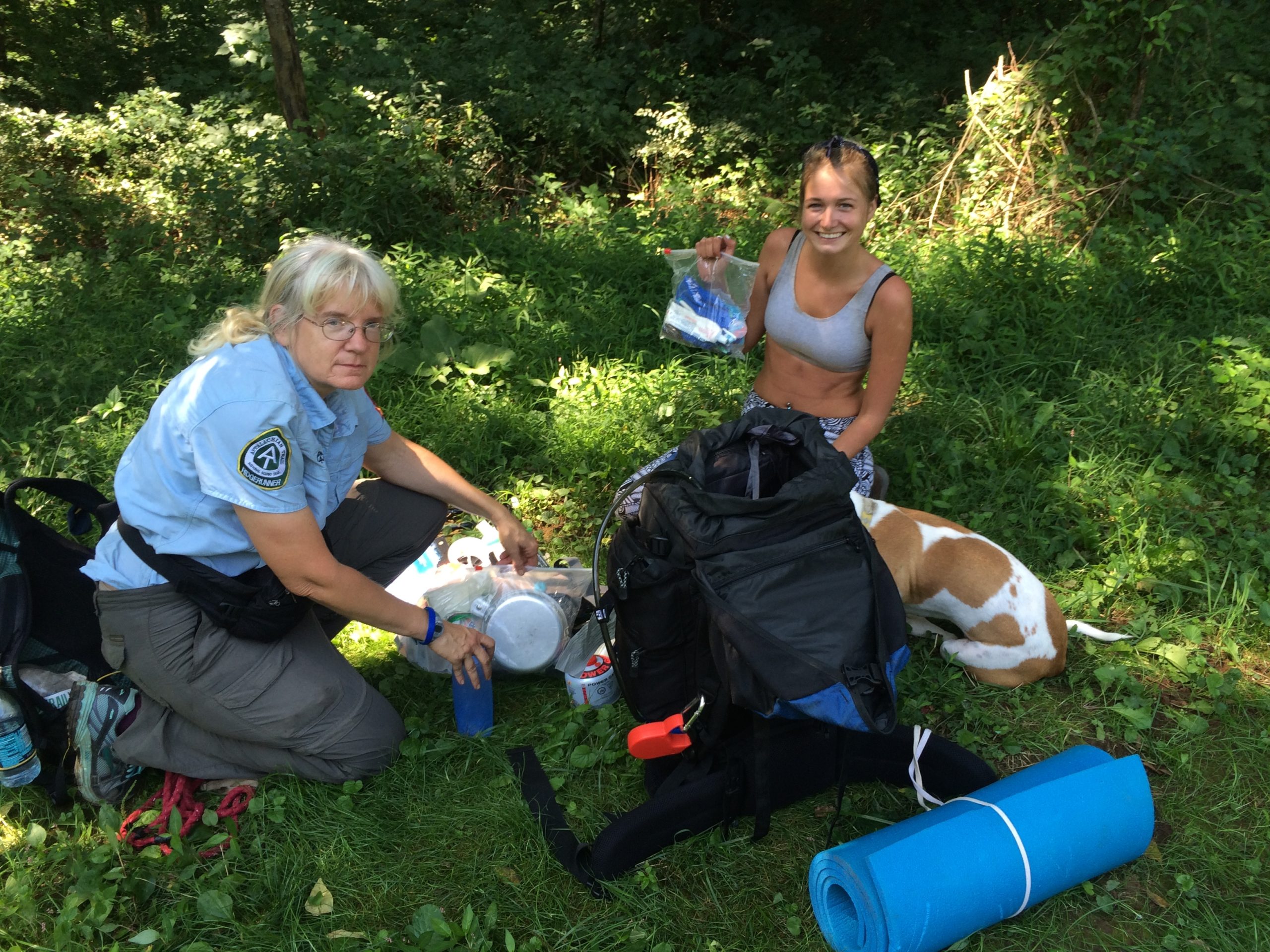 Lauralee helping a novice section hiker with a pack shakedown. She lightened this hiker’s load by five pounds.

A thru-hike can be so intense, so inspirational, and so life-changing that hikers want to take some time to take it all in and think about what they really want for their future. A few hikers are highly motivated to give back.

Other ridgerunners have written for The Trek about their experience. Check out what three-time PATC ridgerunner Sara “Tidewalker” Leibold had to say. She definitely didn’t pull any punches. Sara was like a superstar utility infielder for us this season serving respectively in Shenandoah National Park, Northern Virginia, and Maryland.

Being an Appalachian Trail ridgerunner in Georgia was the most fulfilling job I ever had. It was fun, rewarding, and hard all at the same time. Hikers wrote to tell me I made a positive difference in their hikes. All told, it was an ideal way to tie a bow on my thru-hike the previous year.

If you count yourself as one of the best, if you have the necessary skills, traits, and motivation, please consider applying for what could be the best job you’ll ever have. 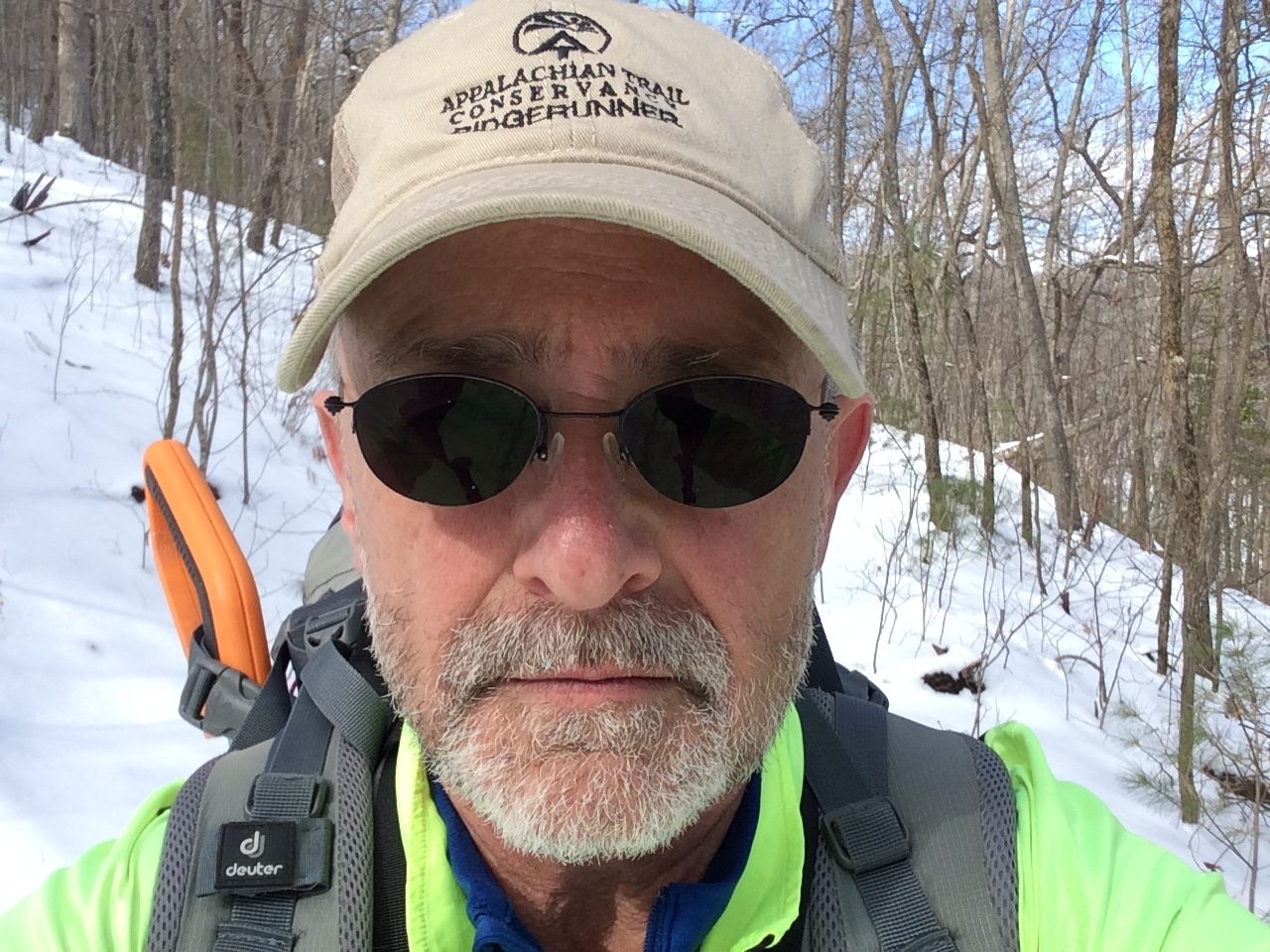 Jim “Sisu” Fetig thru hiked in 2014 and served as a Georgia ridgerunner in 2015, after which he was the Potomac Appalachian Club (PATC) ridgerunner coordinator until the end of this season.  He hikes an average of 500 miles annually with the PATC ridgerunners, maintains trails in Shenandoah National Park, and is a certified National Park Service chainsaw instructor.  He serves on the ATC president’s Leadership Circle and is currently the PATC president-elect.