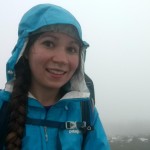 The End Of The World As I Know It

The trees drip from the recent rain and clouds obscure any rays of sunshine.  I am thankful the temperature is in the 50s this morning and won’t start dropping until the afternoon.  My shoes are wet with dew as I slip down the side of yet another mountain  on wet rocks and lift the bottom of my pack’s rain cover.  A puddle of accumulated water splashes out of the cover on to the wet leaves and sprays mud up on my cold, dust-caked ankles.

In other words, a typical rainy morning on the trail. 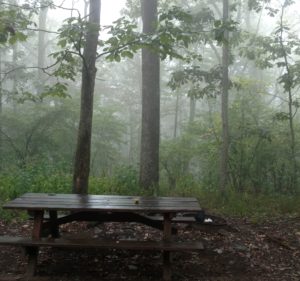 The Virginia Creeper Trail is teasing me from several hundred feet below with its perfectly groomed and railroad-graded surface.  Before long, I stumble/limp across the road to where it intersects the AT.  I walk a few hundred yards down the shared trail, getting splashed with road grit as cars roar by on the highway paralleling the Creeper.

Town!  Town means food.  Town means warm.  Town means shower, being dry, and clean clothes. Town means patching myself up before continuing along the trail in a southbound fashion, inching closer to Georgia.

Except for today.   Because I did a flip-flop hike.  I hiked north to Damascus earlier this year and entering Damascus from the other side of town means this is over.

The First Third Is Physical

I began my hike on March 28th, 2016.  I was relatively fit from years of running and cycling, and it showed.  I breezed through the southern mountains passing people who started several weeks before me.  I was able to go home or have friends and family visit as I am from east Tennessee.  I walked through a snowstorm in early May and loved every minute. 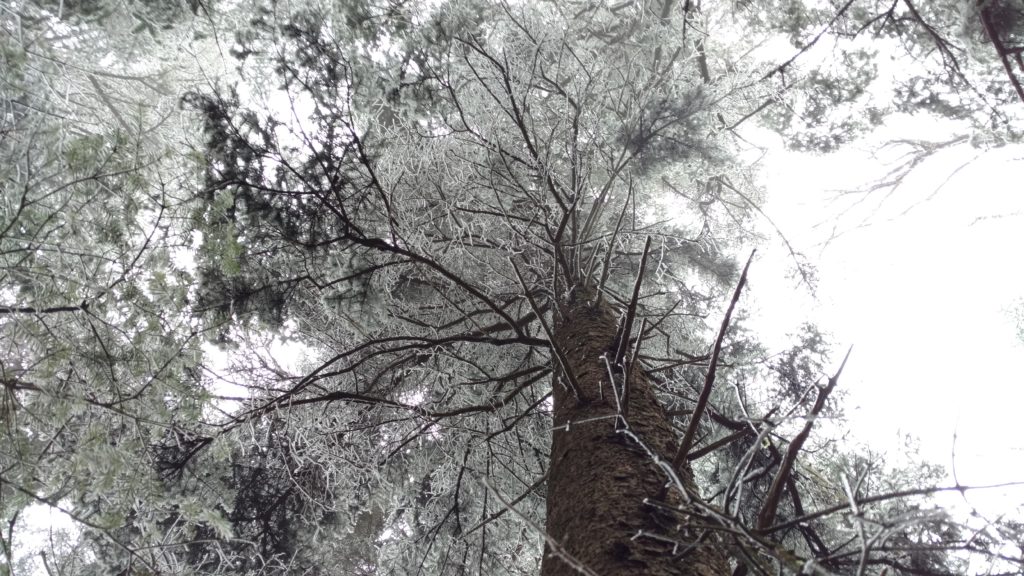 After 470 miles of northbound hiking, I attended Trail Days.  After three weeks at home, I joined my boyfriend and two friends for a bus ride to Maine. 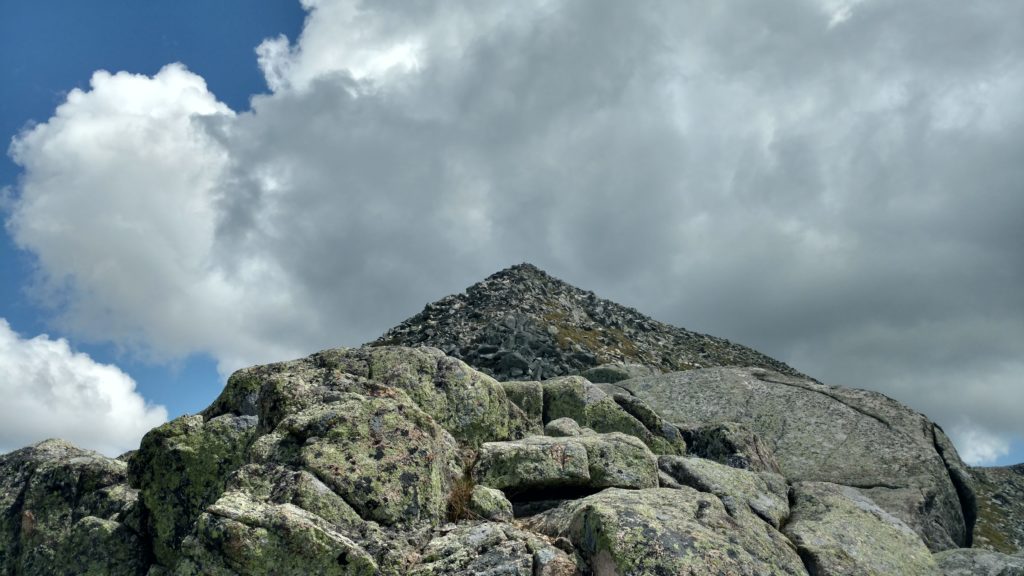 Maine proceeded to kick my ass.  It turned my knees into crackling sandpaper and I realized my first backpack didn’t fit as well as it could.  I underestimated what I would eat in the 100 Mile Wilderness and didn’t account for the fact that 12 miles of rocks would burn more energy than 20 miles of southern hills.  470 miles of hiking in the south did not make up the difference in height between me and my boyfriend, That Guy, and I struggled to keep up with him through the rocks and was worn out far before him. I changed my trail name from “Crank” to “Duchess of Slug” as I was no longer cranking out big miles.

I kept my mind on looking forward to the Whites and they delivered.  The huts offered respite from the biting wind and the views made me forget my aching knees. 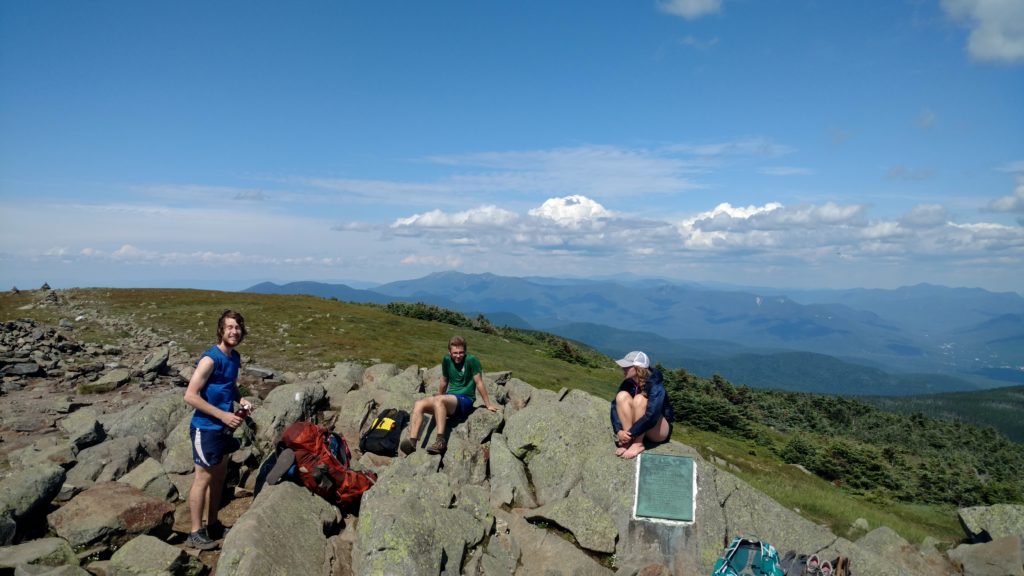 The Second Third Is Mental

My knees healed once the Whites were over, but I still struggled to keep up with someone who was a foot taller than me and whose backpack was 1/6th of their weight instead of 1/5th.  Vermont offered a welcome transition from rocks into rolling mountains and deciduous trees.  Exiting Vermont marked the start of the Heat, capital “H” necessary. 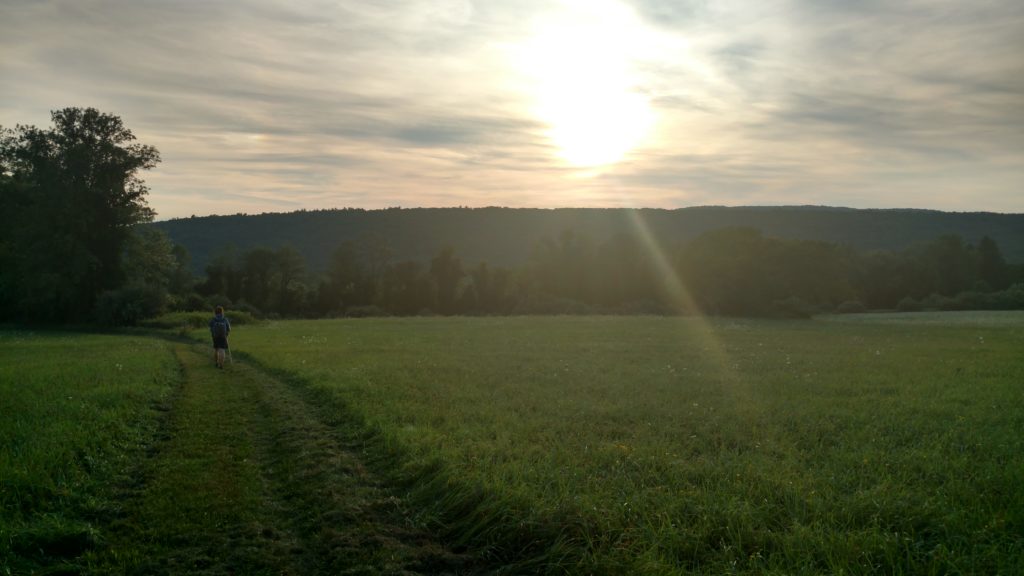 This Heat peaked in New York where the heat index exceed 120 degrees.  I spent four days visiting family, lounging in air conditioning.  When I returned to the trail, all I could hear were echoes of weather forecasters advising everyone to stay inside because of the dangerous heat and humidity levels.  I started to hate video news media and avoided it for the rest of my hike.  I battled heat-induced rashes, nausea, and cramps for several weeks.  These led to me not wanting to eat, which lead to more weakness and dizziness.  I could handle these symptoms, barely. Combined with the hordes of mosquitoes and gnats, I’d begin to question why I started this hike and why I was continuing. 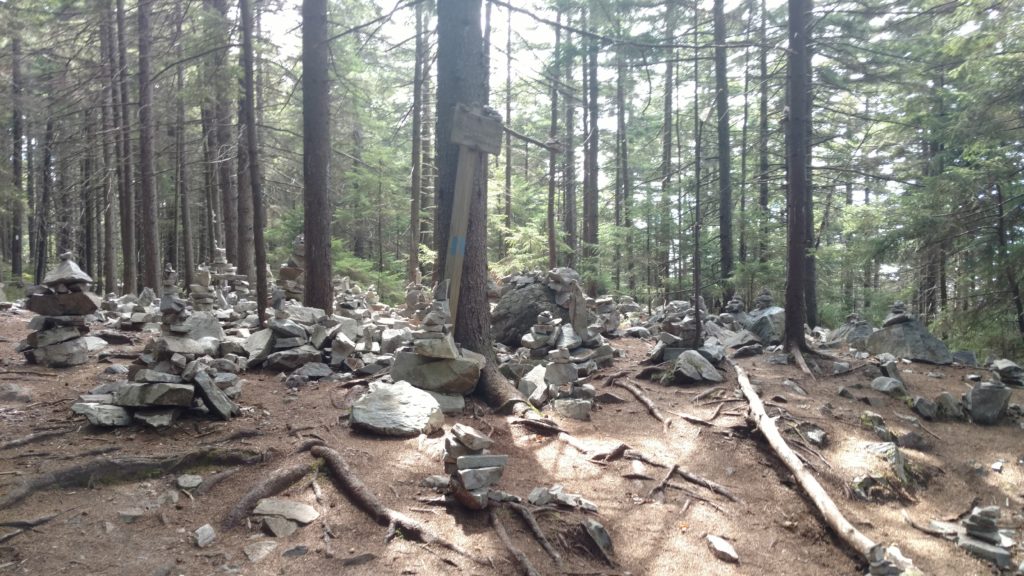 The mid-atlantic wound through small towns with smells of warm food, road crossing every five miles or less, and neutered “mountain” climbs.  The “views” were overlooks of towns and were crowded with cotton-clad locals complaining about the heat and two miles left to hike.  Clean drinking water was everywhere in the houses I walked behind, but springs on the trail were dry for summer.  Non-hikers were wary of thru hikers at best and assumed they were potential criminals at worst.  The point was driven home when I bought a cold beer at the gas station and realized I have nowhere I could go to legally drink it.  Food was available and so were the comforts of town, but hiker amenities such as hostels or in-town campsites were absent.

The Last Third Is Acceptance

As September arrived, the Heat exhausted itself into little “h” heat.  Ridges running through Pennsylvania were not nearly as awful as the Nobos described.  After all, I built my legs in Maine.  I was accustomed to my daily heat rashes at this point.  I knew I would never truly want what I had available to eat, but I was too hungry to care.  My shoes got soaked with rain and sweat, but they always dried eventually. 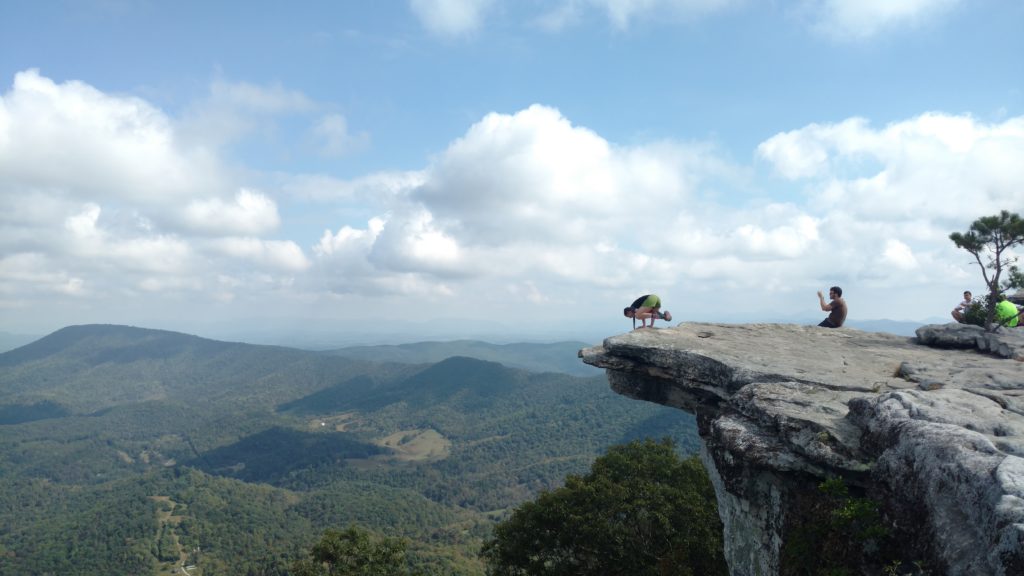 The “unedited” version with dozens of day hikers.

At this point, no obstacles were new but they were obstacles nonetheless.  I had seen everything before, but I still had to deal with it.

One morning I woke up in a shelter after a thunderstorm left my ears ringing with lightning strikes within a few hundred yards.  It was 5 AM and I normally get up around 7.  Two sections hikers took two hours to pack their things and I couldn’t fall asleep again through any of it.  I walked out of the shelter back to the trail, and That Guy had to physically stop me from turning back toward the road, toward the nearest town, away from the AT.  I had 364 miles left.  I had considered quitting before, but this was the strongest urge I had ever had.  I merely hiked from one road crossing to the next.  As I reached each one, I told myself I could quit at the next one.  I had seen everything before and already proved I could deal with it.  Why did I need to put myself through it again?

The Last Week Is Victory 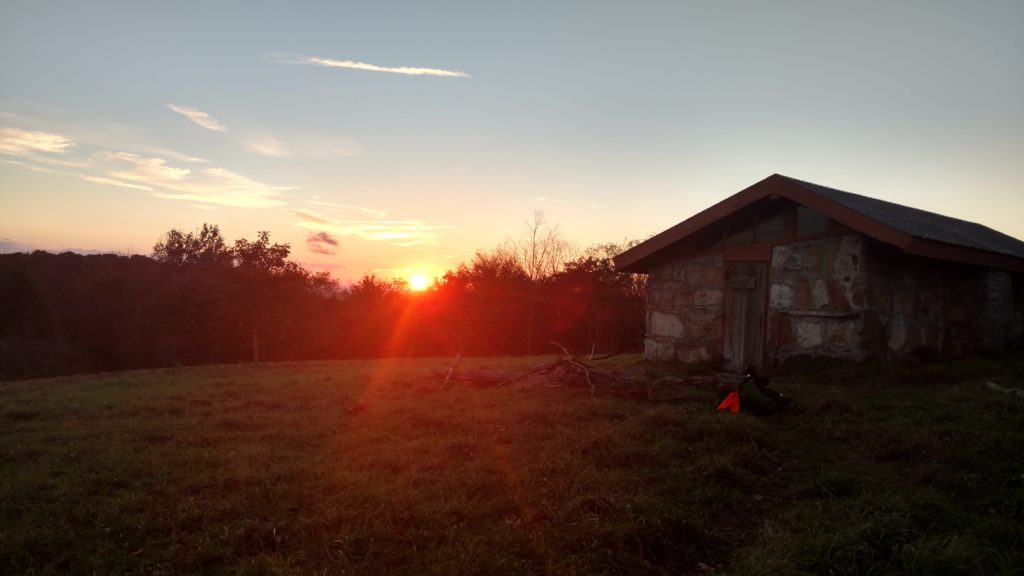 I opened my guidebook and realized a mere three sets of pages separated me from the end of my thru hike.  The weather had turned cool and I was excited when I could see my breath in the evening instead of a sweat spot when I laid in my hammock.  After the Priest, there were no major climbs left.

I was going to finish the entire Appalachian Trail.  I was in the best shape of my entire hike and thought nothing of twenty mile days when the high temperatures were in the 70s and the lows in the 40s at night.  Fantasizing about this weather and level of fitness time was what got me to this point. 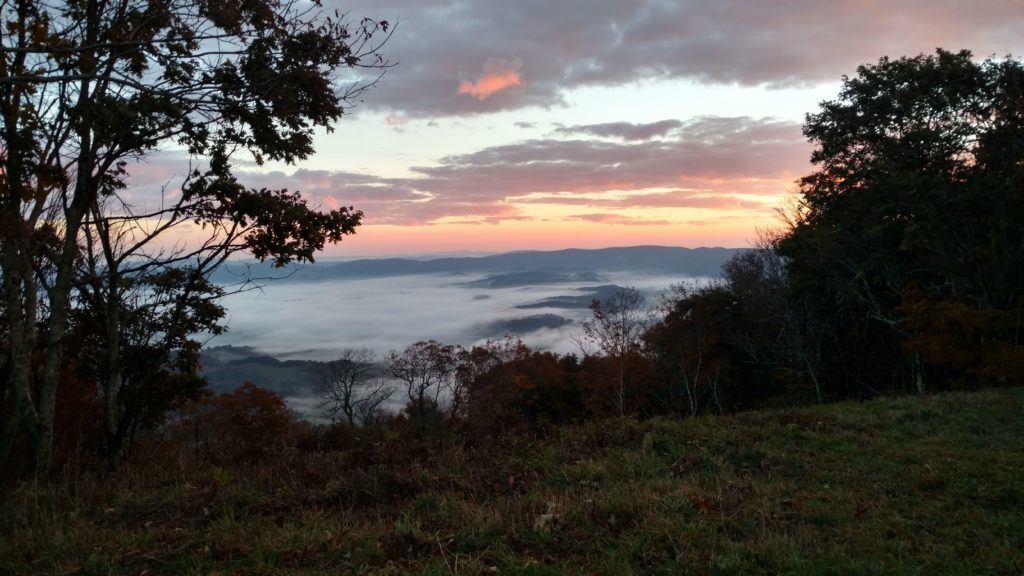 I reached Grayson Highlands two days before Damascus and had been looking forward to it since the beginning of my hike.  I squealed when I saw the first pony and saw the Milky Way for the first time since the Whites.  This was the kind of experience and the time of year that made me fall in love with backpacking and made all of the hardships along the way worth it. 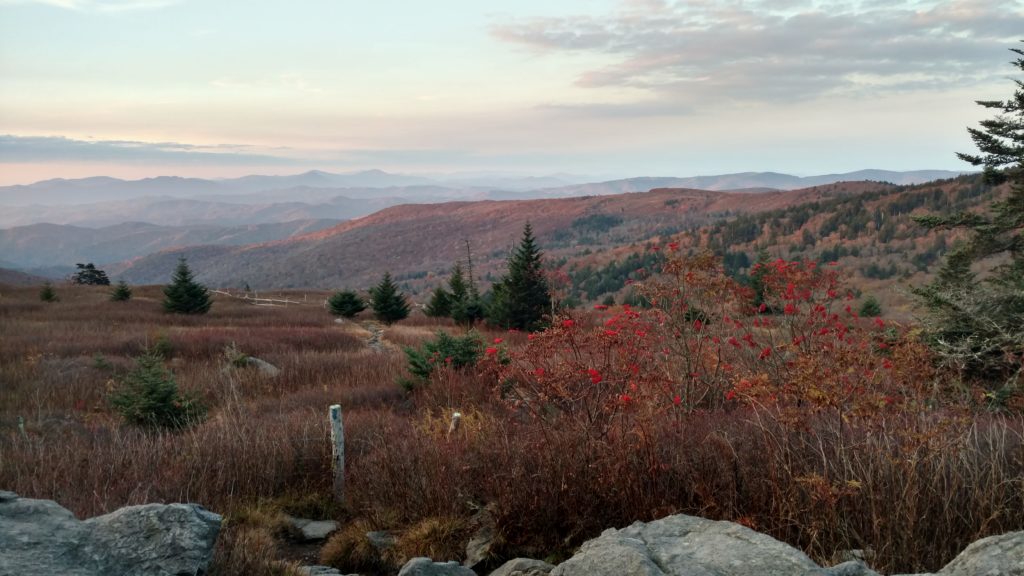 The First Week Is Confusion

I spent my finish day in Damascus and was excited that friends who I hadn’t seen in months were catching up; That Guy and I had seen only one thru hiker in the weeks preceding Damascus.  We had double orders of tacos and cheap beer at Hey Joe’s and I wore a loaned pajama shirt with kittens on it and men’s basketball shorts around town.  That Guy resupplied for the last 470 miles of his hike, and I didn’t.

The next morning, the excitement of finishing was replaced with every feeling I experienced over the past six months hitting all at once.  I cried hysterically when my parents arrived in town to take me back to Tennessee.  Returning to normal society meant comfort, and fresh food, and temperature control.  Returning to normal society meant artificial noise, and news media, and all the manufactured chaos I had removed myself from.  Wasn’t this supposed to be a time of relief and celebration?  After two days inside after returning home, I took a 16 mile day hike in the Smokies and it was not enough to tire or calm me. 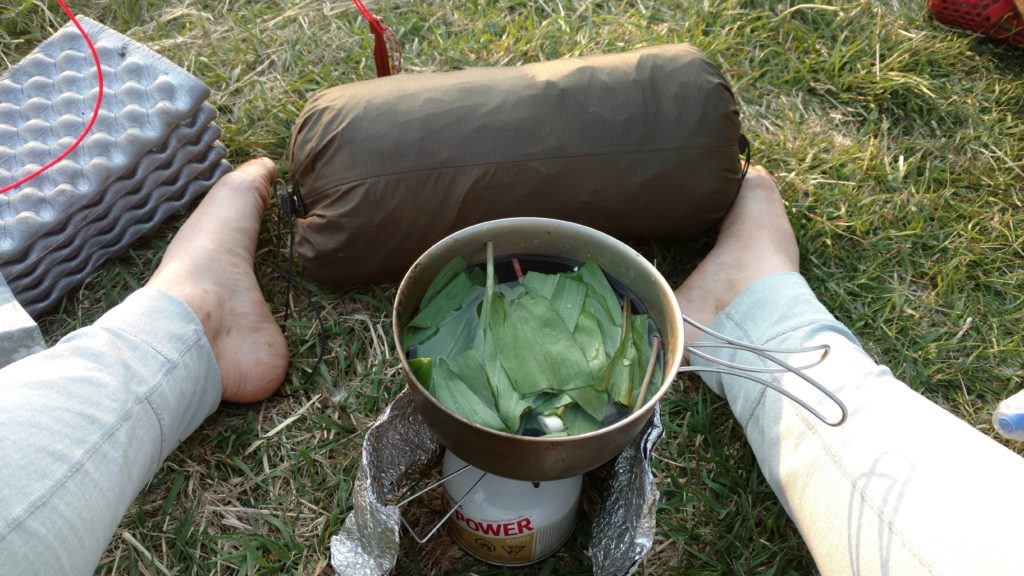 No better produce than spring ramps

My body is ready to be done, but the Fall weather brought back the excitement for backpacking that the Heat sucked away from me.  As I am excited to be hiking again, I have to be done.  I am putting off cleaning my gear because it means it is really over.  I am toying with an overnight trip, but have to remind myself that my body needs to rest from carrying a pack even if my muscles and heart are in peak physical condition.  The trail stripped away much of my sense of self that I had going into it to allow me to figure out what really matters to me when I’m done.

And now I have the rest of my life to figure that out.  At the very least, I know it involves outdoor adventures.

Duchess of Slug, signing off. 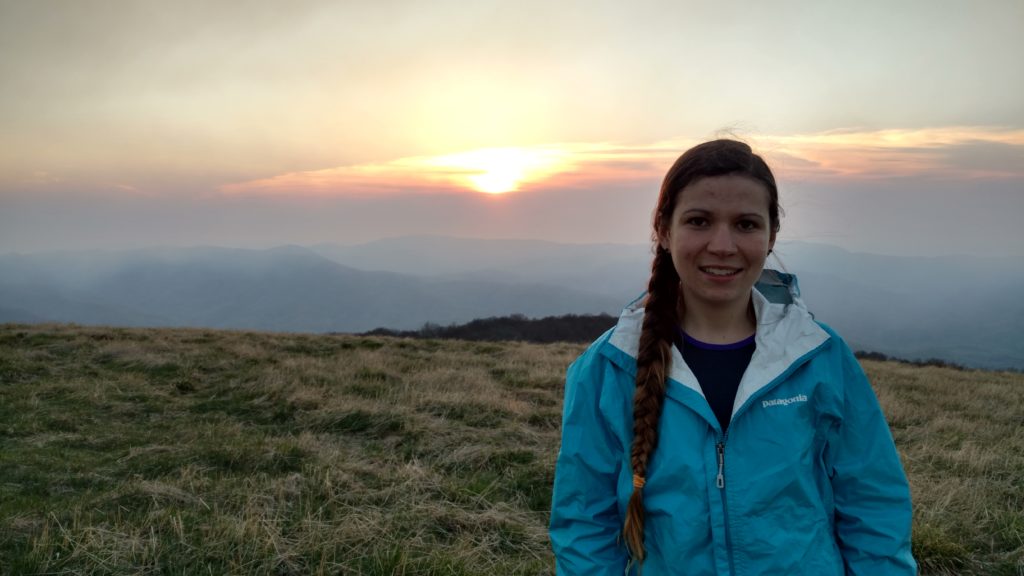 Hi! I'm Laurel and completed a flip-flop thru hike hiking NoBo solo from Spring Mtn. to Damascus and continuing SoBo from Mt. Katahdin back to Damascus with my boyfriend. I'm a twenty-something recent University of Tennessee graduate who grew up in the Smokies and decided it's time to take the ultimate tour of my home mountain range. In addition to mountains, I enjoy riding all kinds of bicycles, scaling rock faces, and begging for affection from dogs.