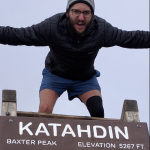 With time for one last Shakedown hike before I start North in early April, my buddy and I decided to do a 3-day trip to the mountains of North Carolina to help get my trail legs under me.

On Thursday night we got together to talk gear. Michael, whose Trail name is Nigel, did the southern half of the Appalachian Trail in 2013 before having to hop off to go to grad school. He’s a much more knowledgeable dude about backpacking than I am, so I was fortunate to have the opportunity to pick his brain about all of his experiences. At this point I definitely need all the help I can get!

We exploded our packs all over his house and traded stories over the next few hours while we decided what gear would make the cut for the trip. Michael was wearing his headlamp for most of the time for absolutely no reason. I think he was just psyched to get on the trail. 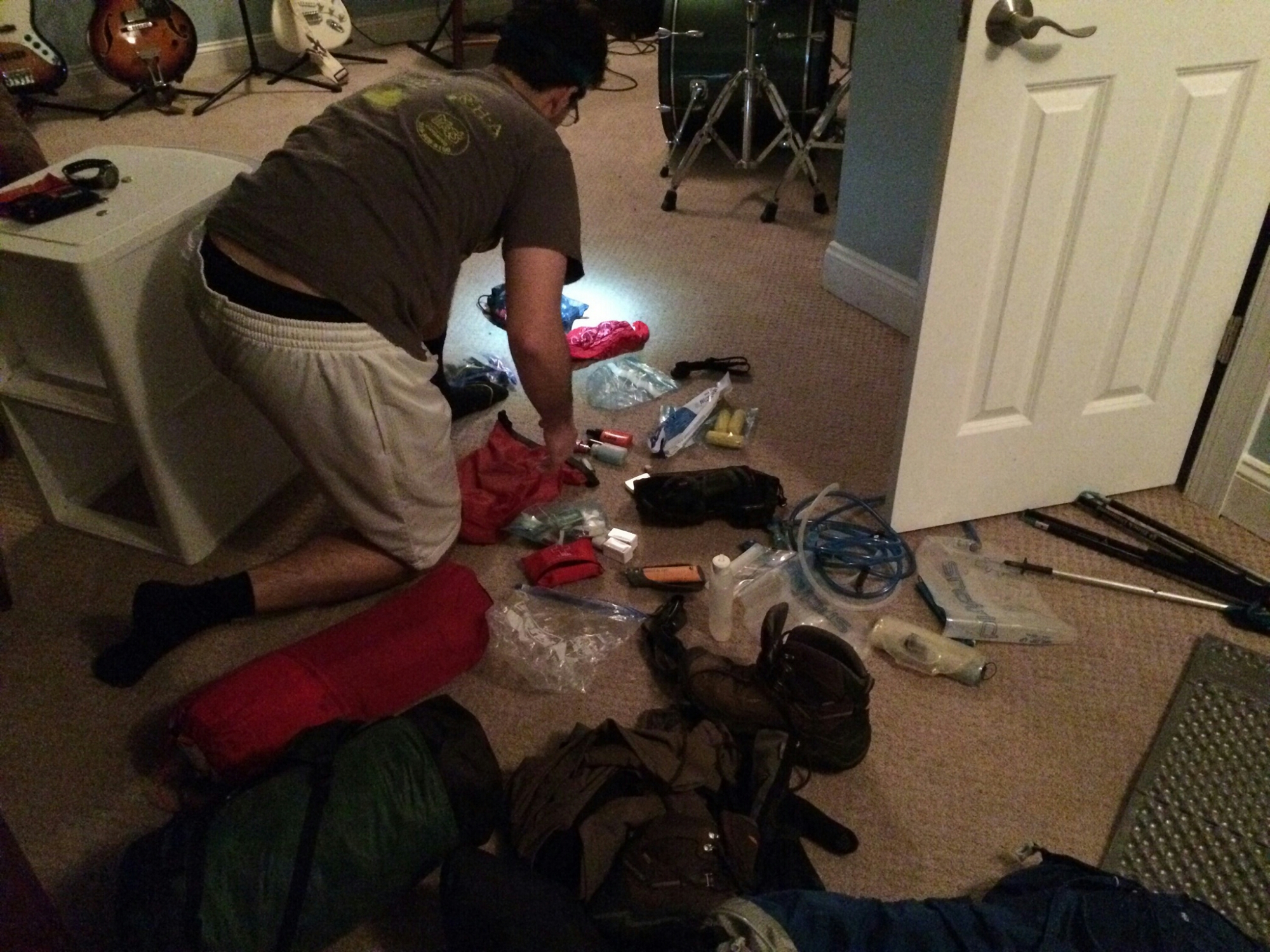 At this point my base weight is down around 15.5 pounds, and I wanted to give all of my thru hike equipment one last test before the real deal next month. So despite the fact that the trip would only be a quick 3 days, and I could probably get away with taking some creature comforts, I brought the exact same clothing and the exact same food I’m planning on taking at the start of my thru hike.

As I went to bed on Thursday, I reflected on how I was feeling about the thru hike. It’s a strange mix of emotions. Some excitement, obviously, and I think that’s normal when embarking on any major life decision. That excitement is definitely mixed with fear at this point though. Not that I’m scared of getting hurt or dying or getting eaten by a bear… it’s mostly fear of failure. That fear is only increasing as I get closer and closer to my start date. As much as I want to believe that it’s the journey and not the destination, I can’t help but feel like if I had to get off trail, if I couldn’t achieve his dream of finishing the thru hike, then I would be extremely disappointed in myself. I’m not sure how to reconcile these feelings yet, I need to do some more thinking on it.

Carver’s Gap is a solid three and a half hour drive from Chapel Hill , and unfortunately we couldn’t get off until around dinner time on Friday due to work schedules. So we knew we’d have some night hiking ahead of us to get to the campsite that we wanted to get to on Friday night.

We pulled into Carver’s Gap around 11:00pm, in full dark, with clouds and wind whipping through the parking lot. Not the ideal start to the hike, but hey, embrace the suck! At least it wasn’t raining. 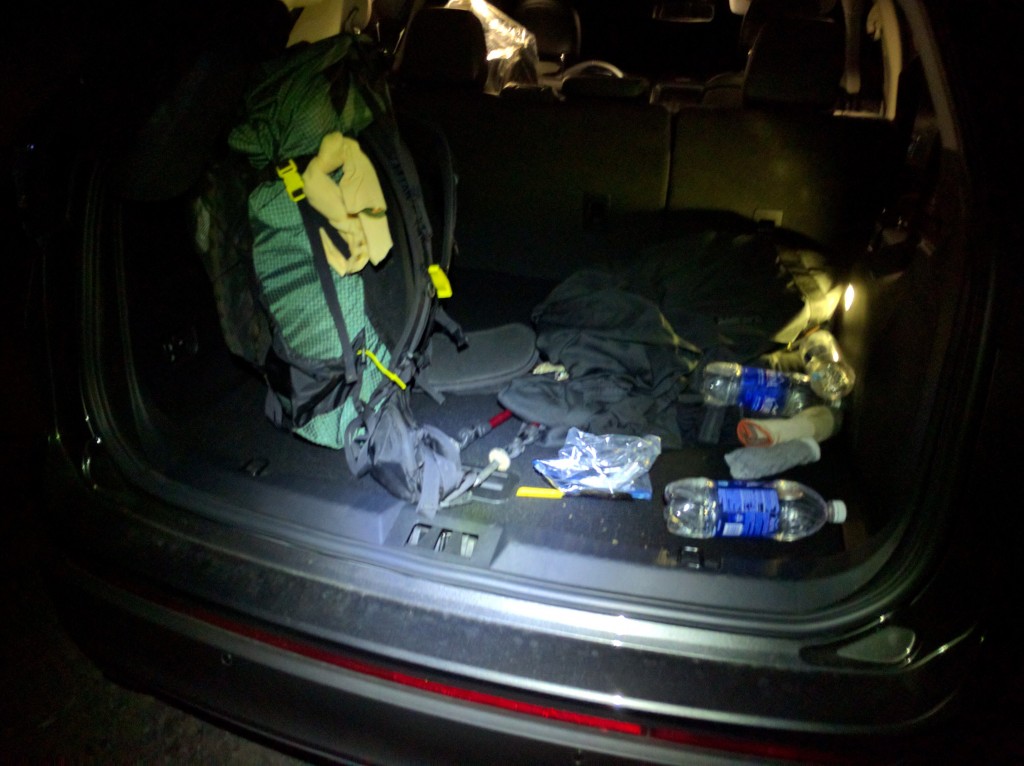 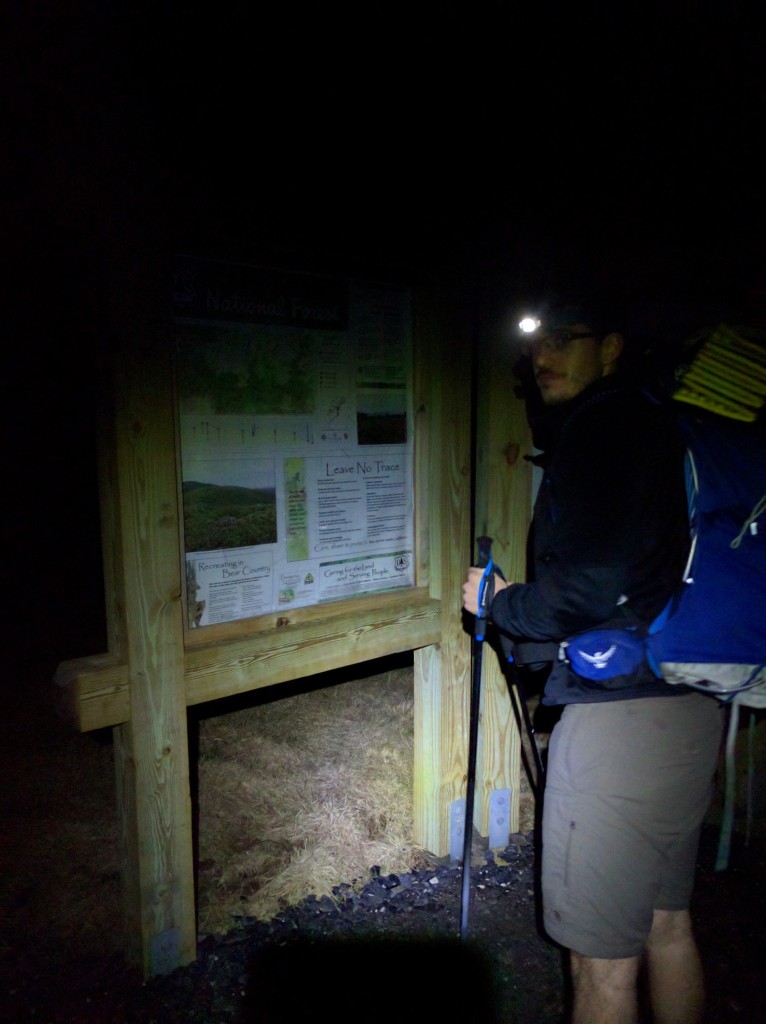 Michael had a guide that said we may be able to camp at a bald a few miles away from Carver’s Gap, but it was so windy on top of the balds, we hurried on towards Stan Murray Shelter, 3.5 miles from the parking lot. Clouds were whipping past us on the balds, and the gusts were so hard that we struggled at times to talk to one another! But, as we got below treeline, the wind subsided and it became a beautiful night to hike.

We rolled into camp at 12:30am, exhausted and ready for bed. Fortunately there were no other hikers there for us to wake up, so we decided to just toss our bags down in the shelter and get a few hours of sleep before sunrise. 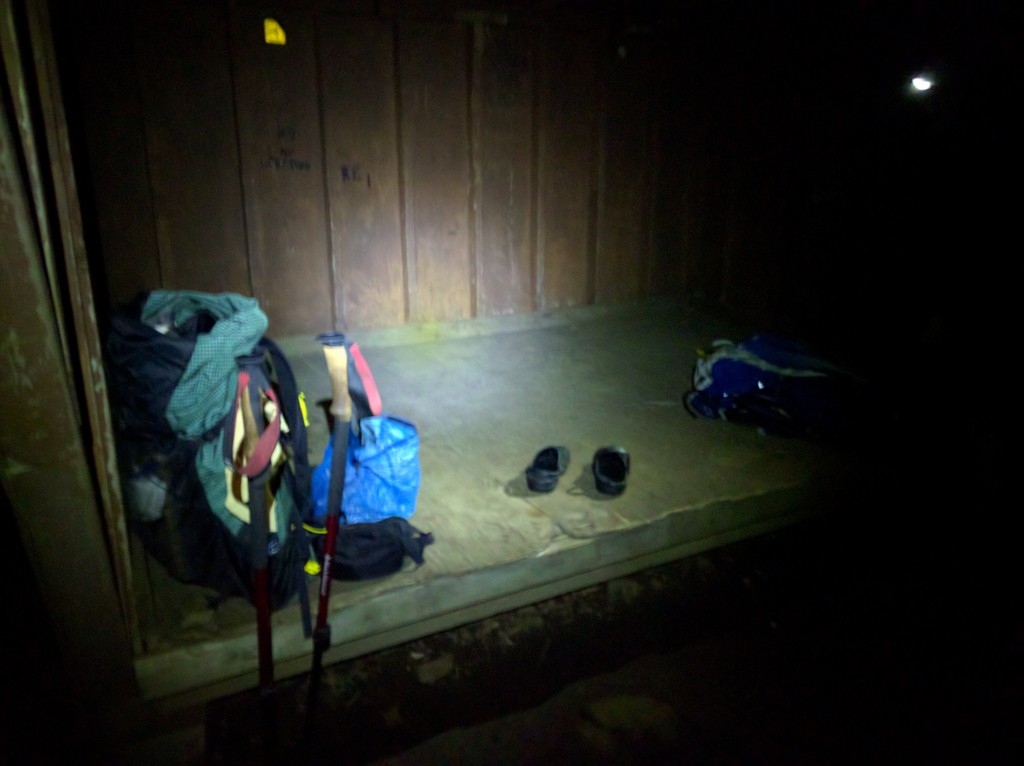 It was a SUPER chilly night, due to the wind blowing directly into the shelter. Mice were scuttling around most of the night, which kept us up initially, but eventually we tuned it out and fell asleep.

We awoke around 7:30am and hit the trail. It was only a few miles to Overmountain shelter, which a few other hikers we passed to us was full to the brim of hikers on this beautiful weekend. 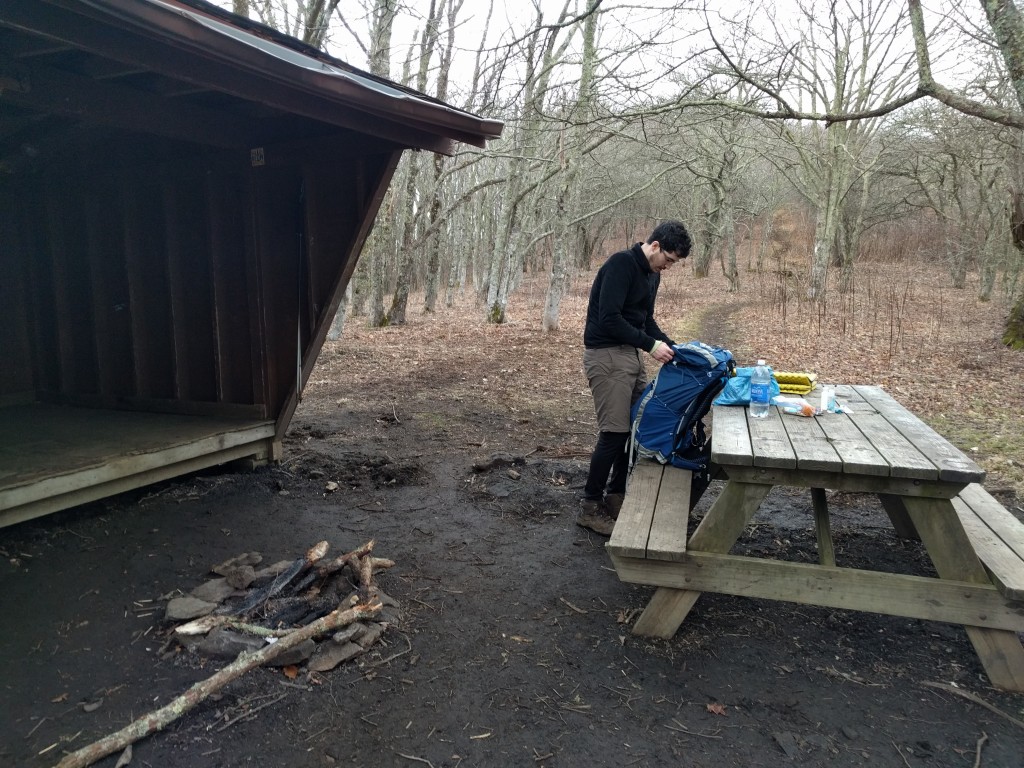 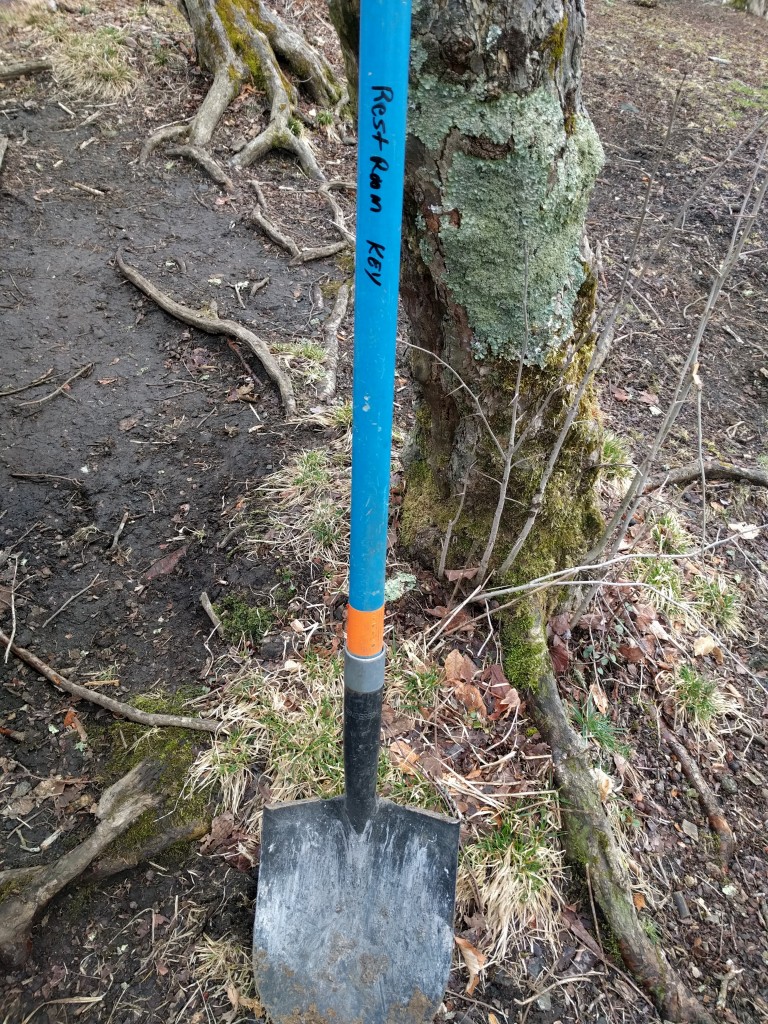 We left the shelter at 8:45 and headed towards Overmountain shelter. Easy hiking. I had on my compression pants under my patagonia shorts to cut the wind.

Overmountain Shelter was down a blue-blazed trail. The fog was burning off by this point, which meant the views on the upcoming balds would be clear.

At Overmountain there were tons of hikers there, with three dogs running around. We met Spanky and Bunny, who brought up some trail magic for thru hikers. Spanky hiked the AT NOBO in 2014 and Bunny hiked the southern half the trail in 2013. We swapped stories and they told us about their trail names. Great people all around, and I will definitely be looking for you two in Damascus at Trail Days! 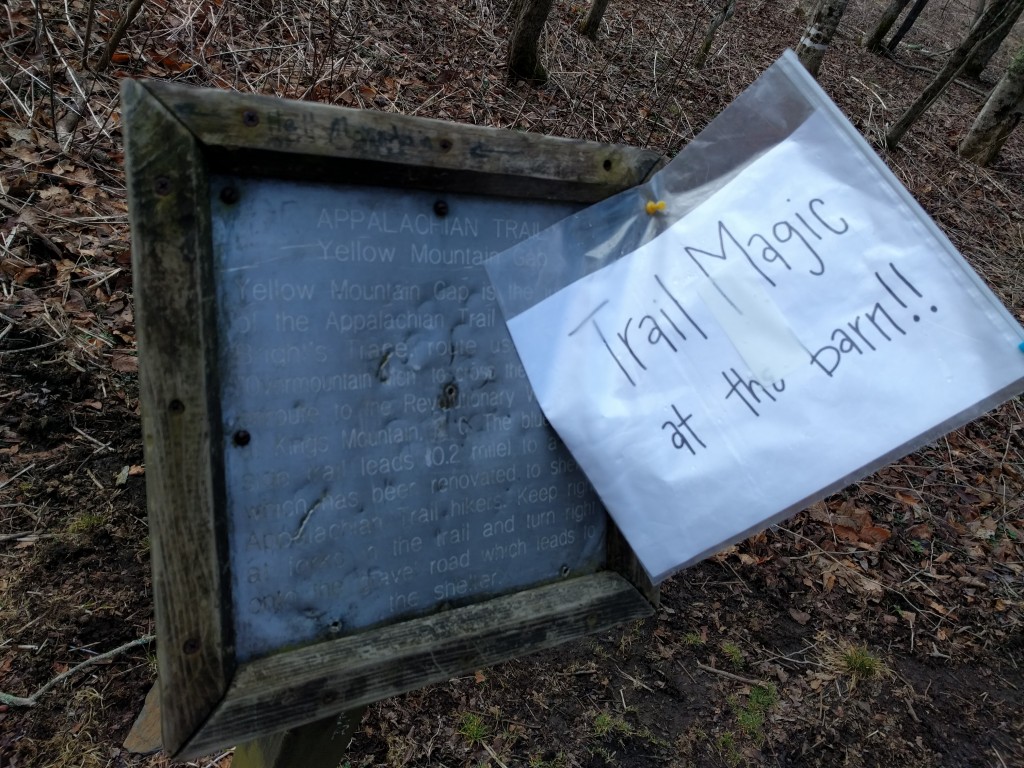 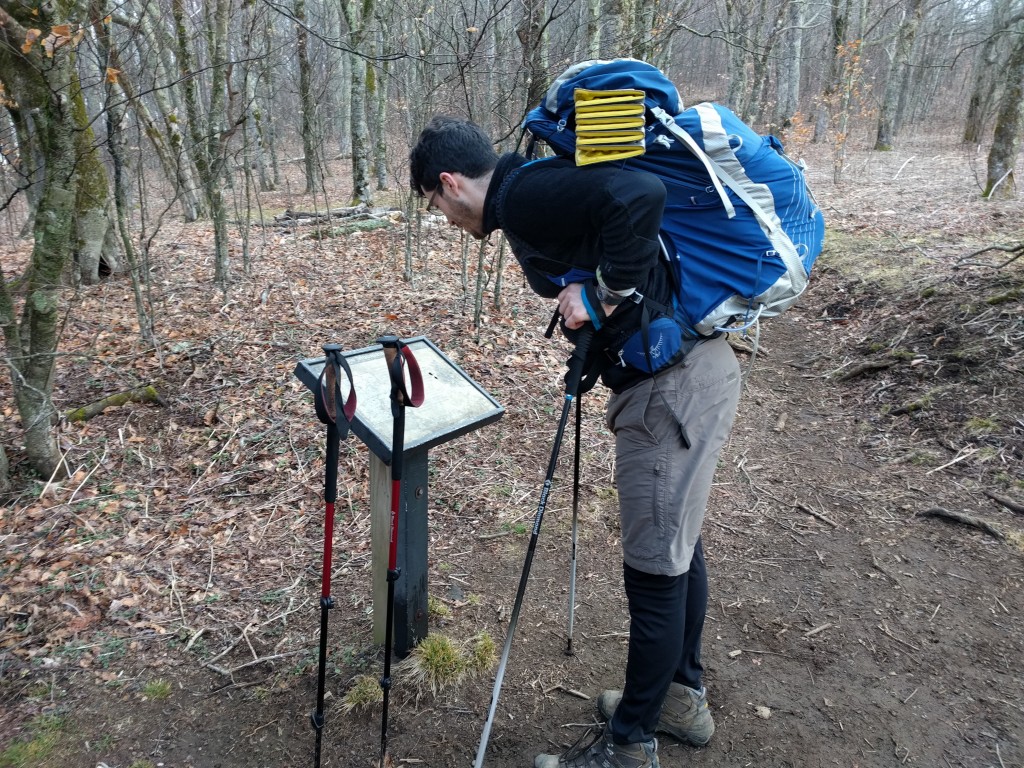 We hung around for about 30 minutes, then headed out of Overmountain Shelter and kept rocking towards Hump Mountain, which was our big peak for the day. We stocked up on water and headed up into the balds!

It was about 20 minutes up onto Little Hump mountain, which was still pretty socked in with fog unfortunately. 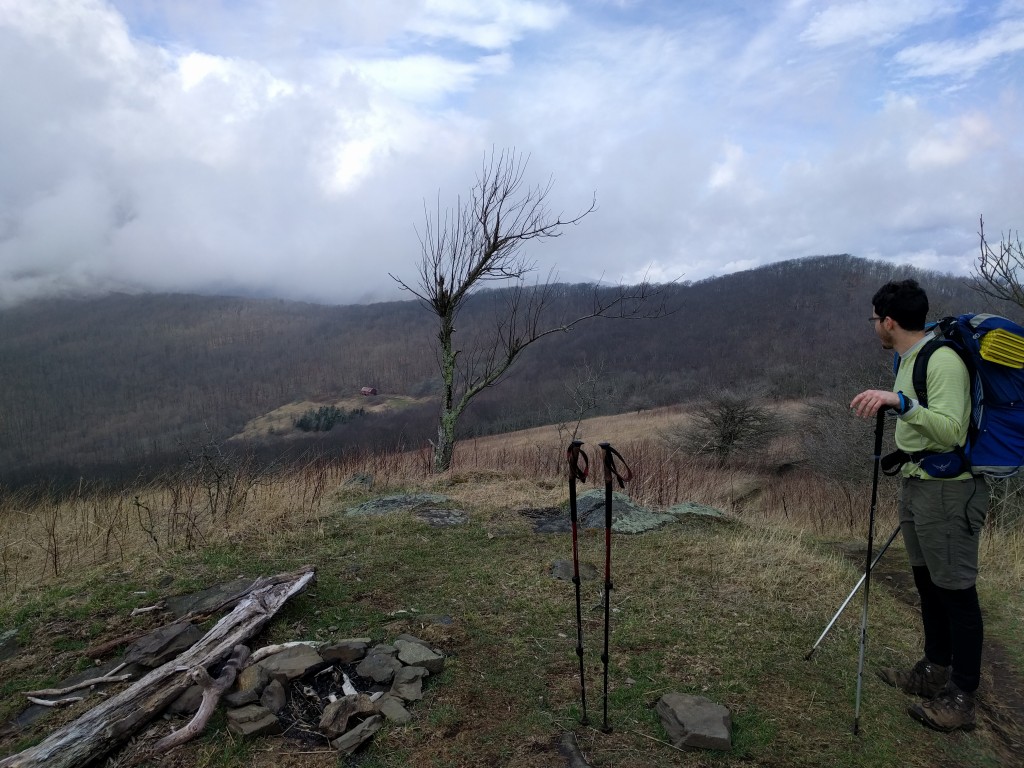 Overmountain Shelter in the distance!

After eating some lunch between the balds in the protection of the trees and near a stream, we headed out towards Hump Mountain. 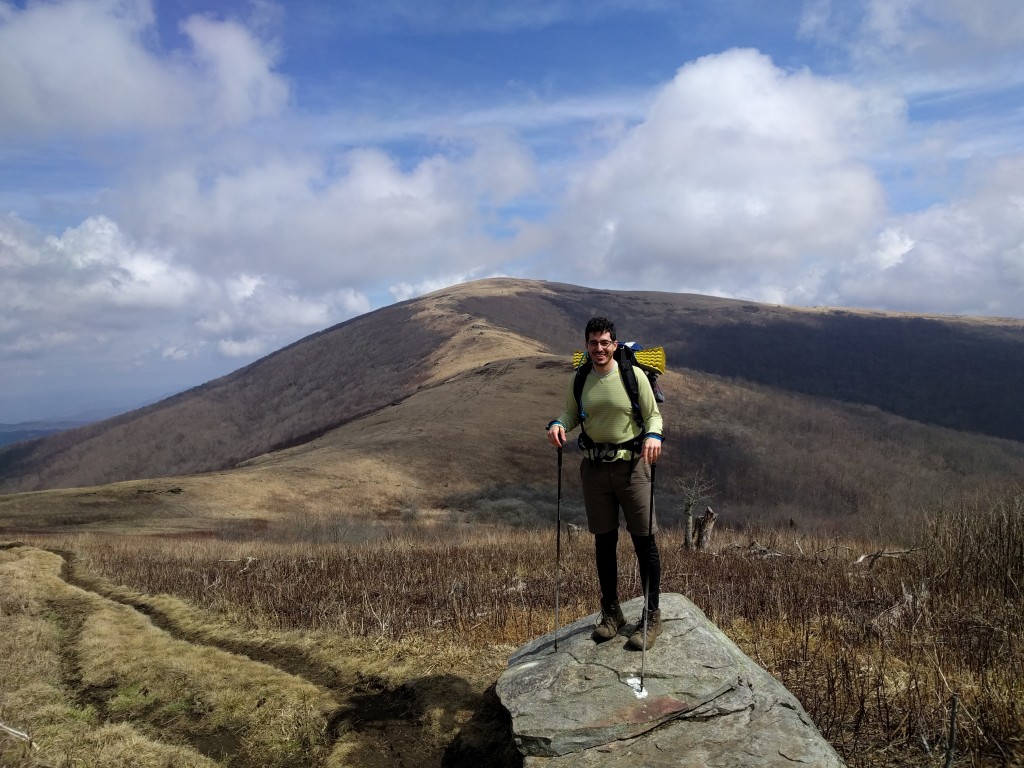 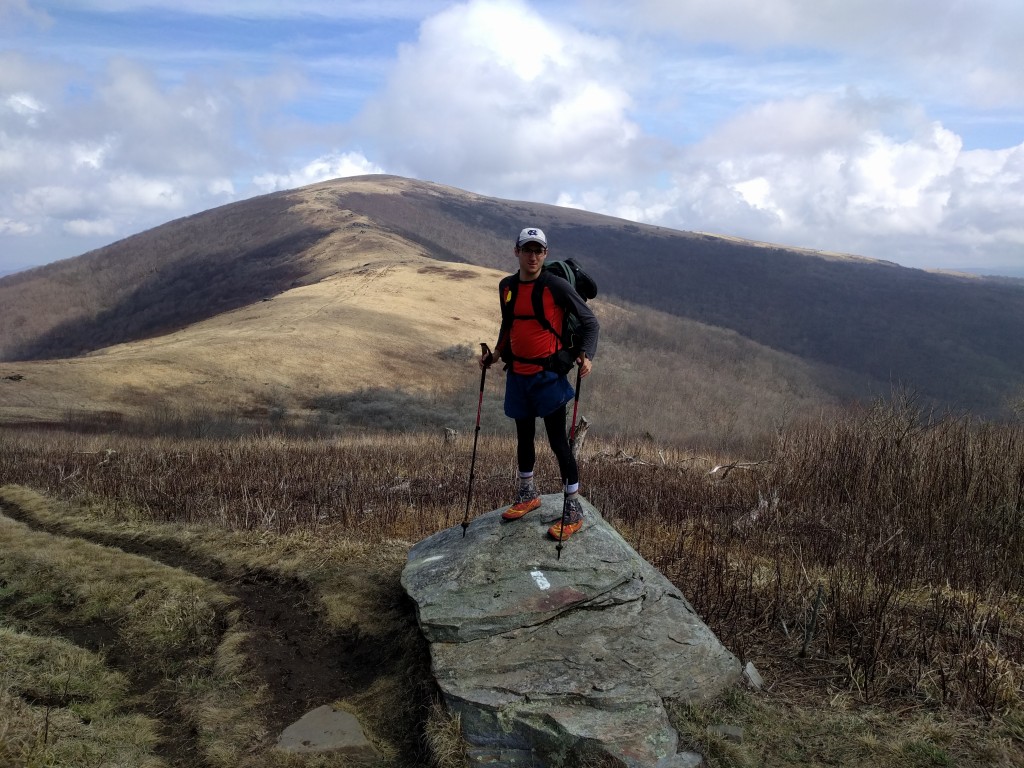 We could see our path all the way up to the peak of Hump Mountain. We huffed and puffed all the way to the top. (We are super out of shape). The fog burned off and, although it was still super windy, it ended up being a beautiful view from the top. We bumped fists over the successful climb and started down. 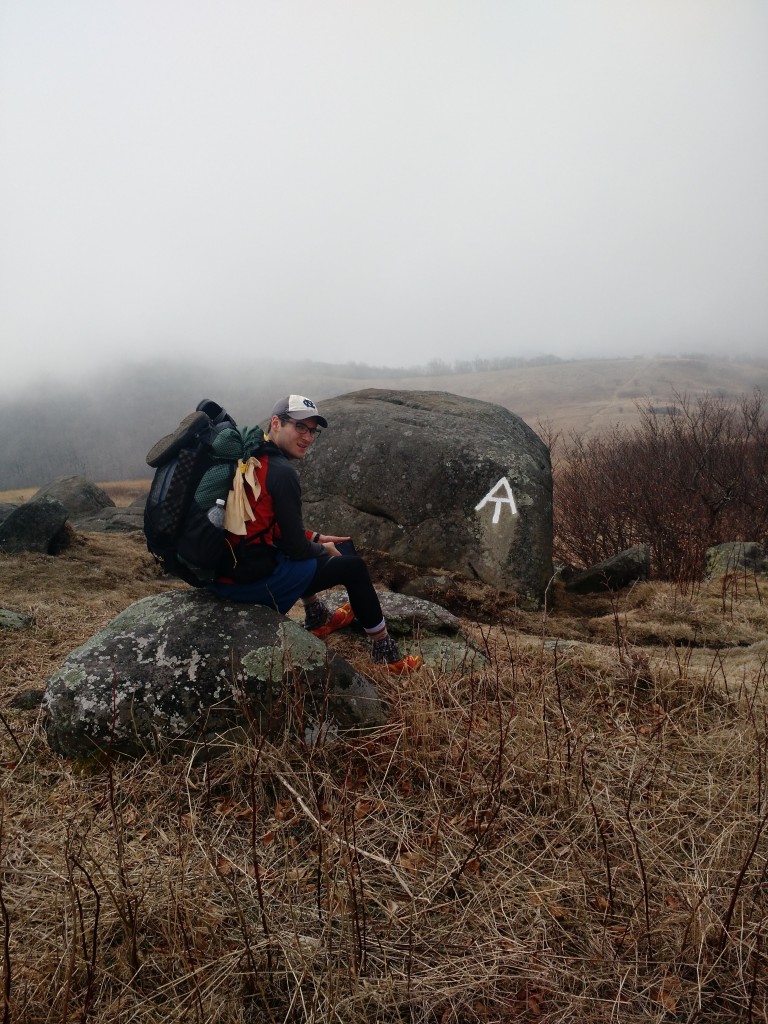 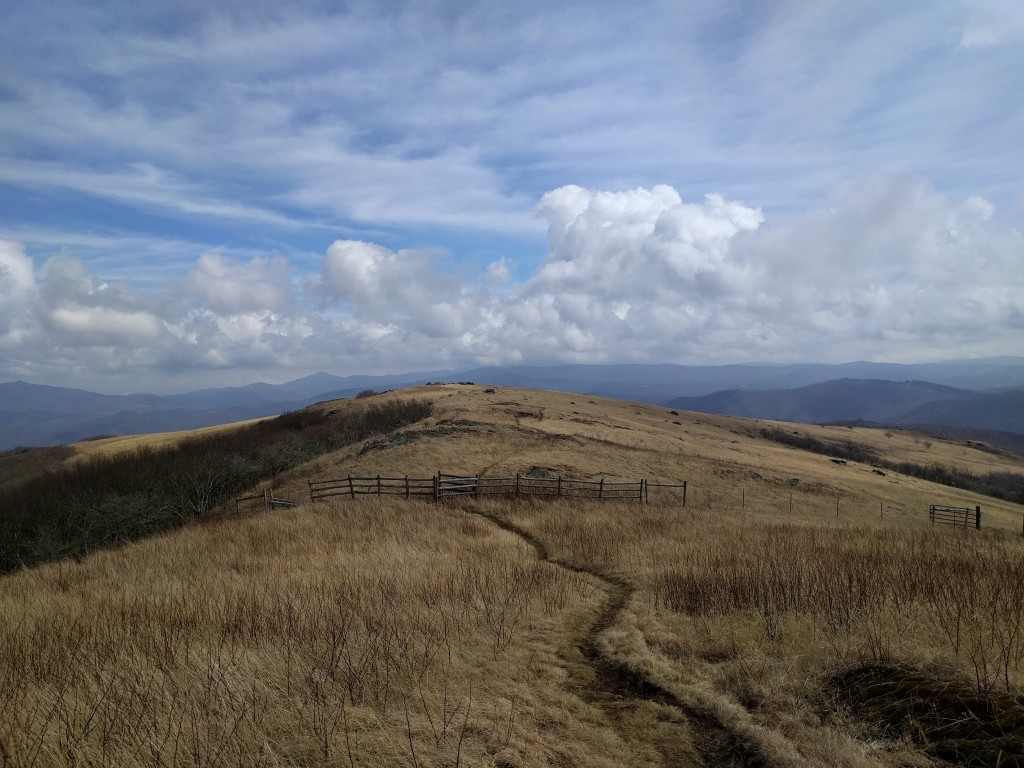 It was all downhill from the peak of Hump Mountain. On our way down to Doll Flats we met Backtrack, a 2015 thru-hiker from Damascus. It’s funny talking to former thru-hikers. I’m beginning to notice that I haven’t met a thru-hiker that I didn’t enjoy speaking with.

Doll Flats was a great campsite. We rolled into camp around 2pm and had plenty of time to kick around, filter water, explore the area and generally hang out. No other hikers camped there, surprisingly, so we had a giant camping area 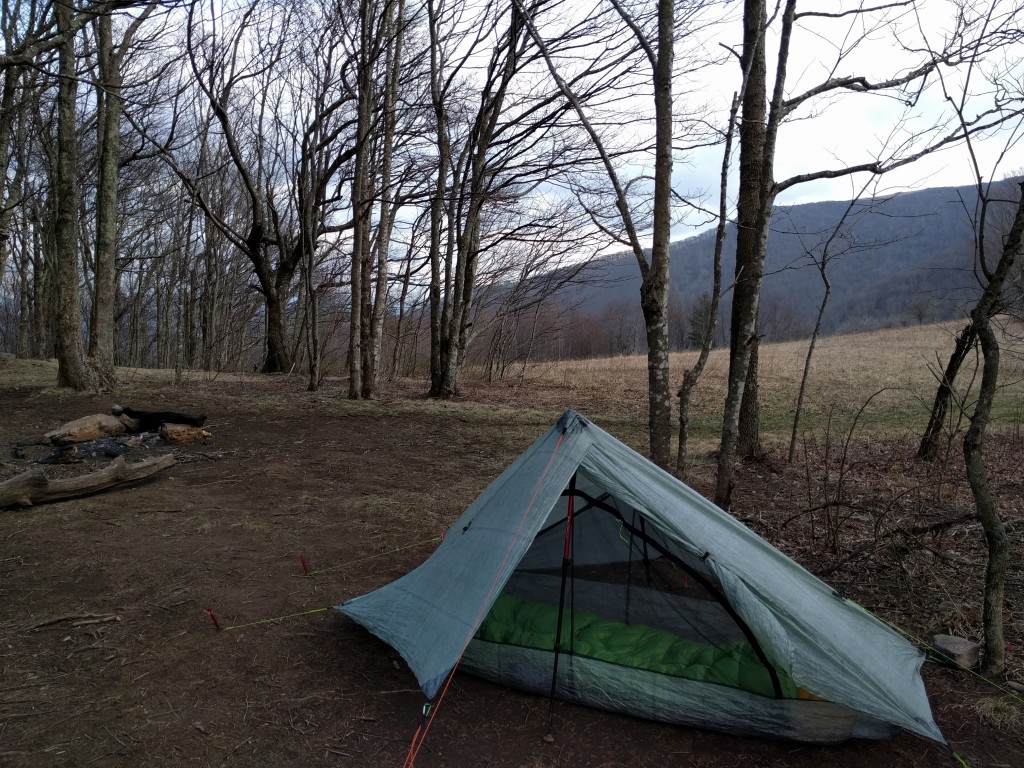 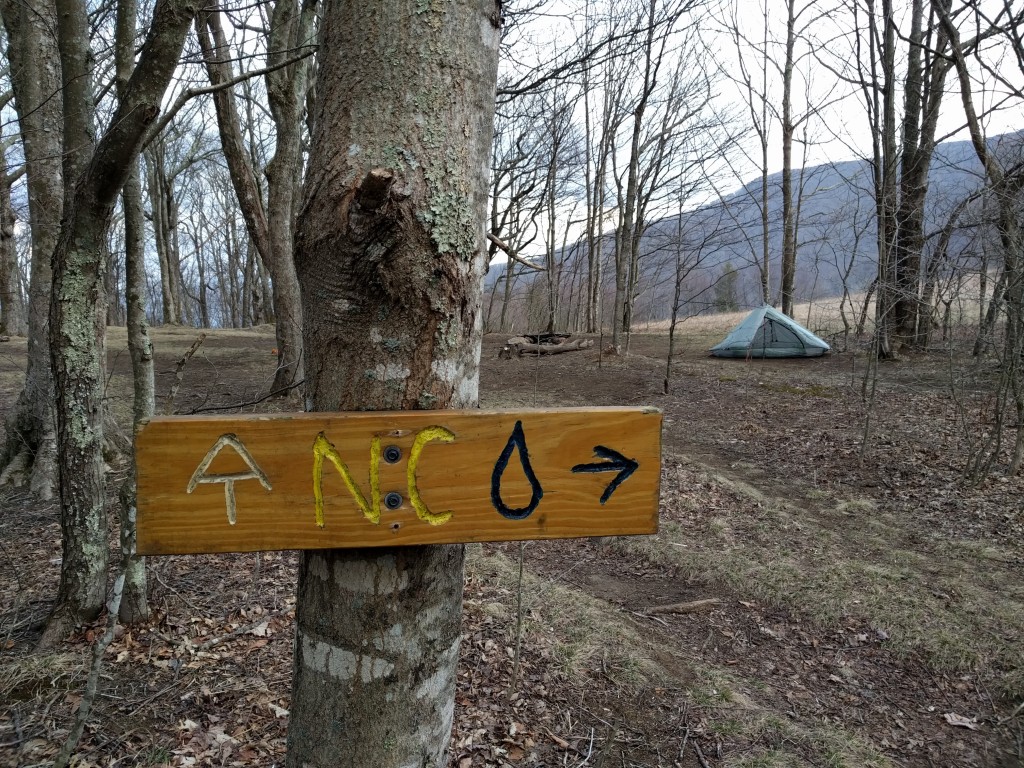 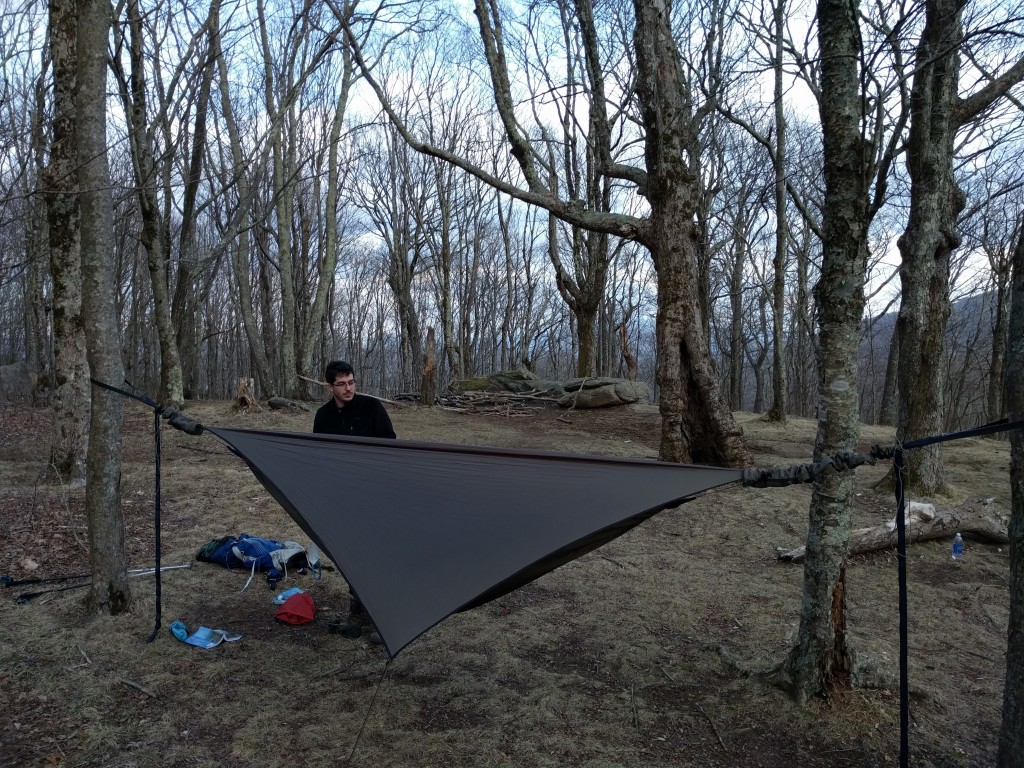 Before dinner Michael ate about a quarter pound of straight cheddar cheese off the block, then had to take a nap to sleep it off. Cheese, nature’s Nyquil. 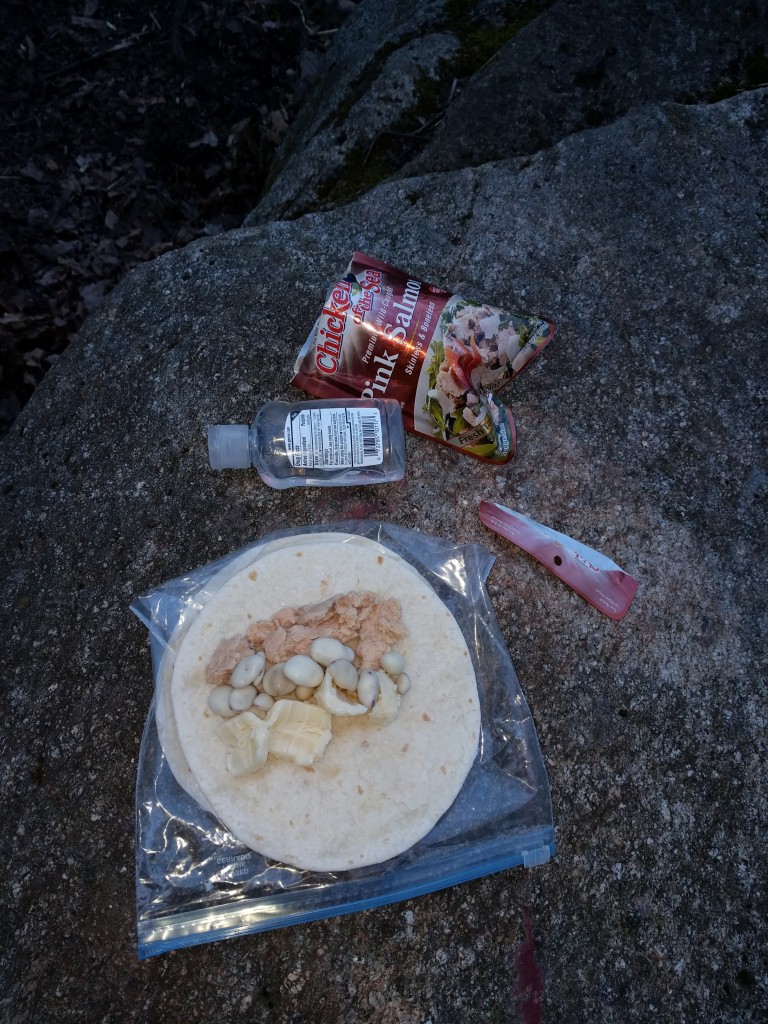 Dinner was extra sharp cheddar cheese, salmon from the packet, and yogurt covered raisins, rolled into a tortilla. Delicious! 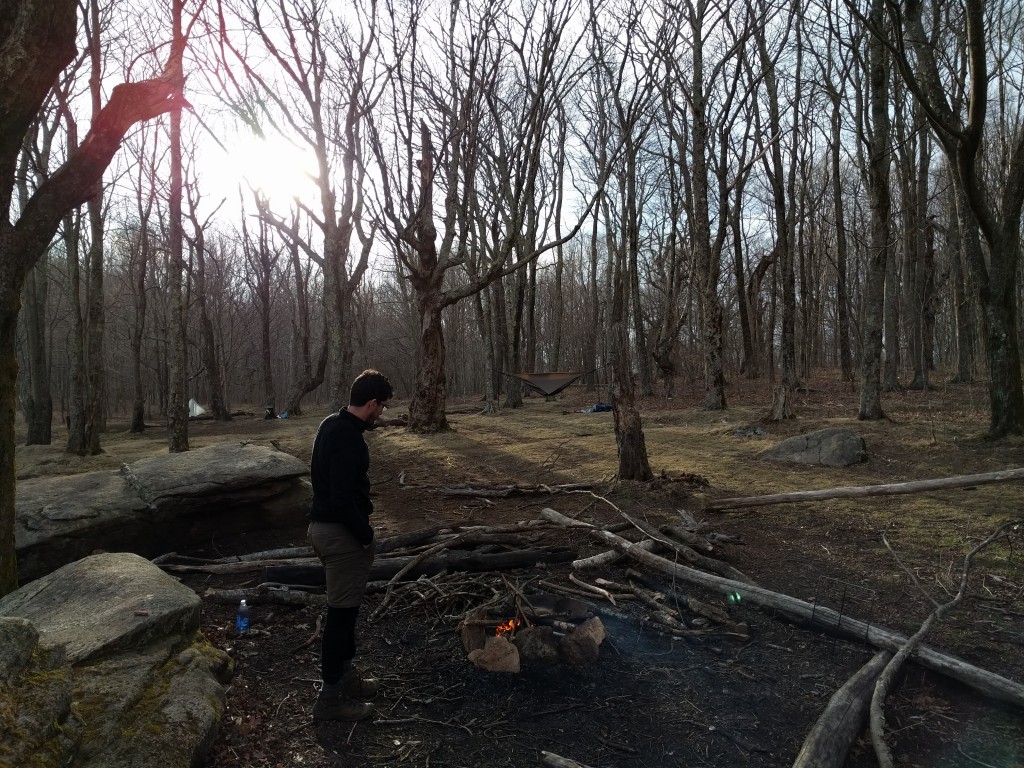 We hung out around the camp fire for the rest of the night. Michael brought his trail journal from his 2013 NOBO attempt and read off his entries, which were simultaneously hilarious and enlightening. We were both pretty beat from the day’s hiking and decided to call it around hiker midnight (9pm).

I awoke to three sounds.

There were crazy wind gusts coming off the flats and hitting our camp site. The rain was coming in as well. Michael and I threw our stuff in our packs and got out of camp within 10 minutes, knowing we only had a few miles before we got to 19E and the car we had left there on Friday night.

The rain let up as we were hiking out, and we were able to unzip our rain jackets and enjoy the forest scenery. We spoke of everything and nothing – Stories ranging from how proud we are of our siblings, to the worst breakups we ever had, to interior design.

We got to the cars around 9am and drove out. Our first hot meal in days was delicious (if not especially nutritious). 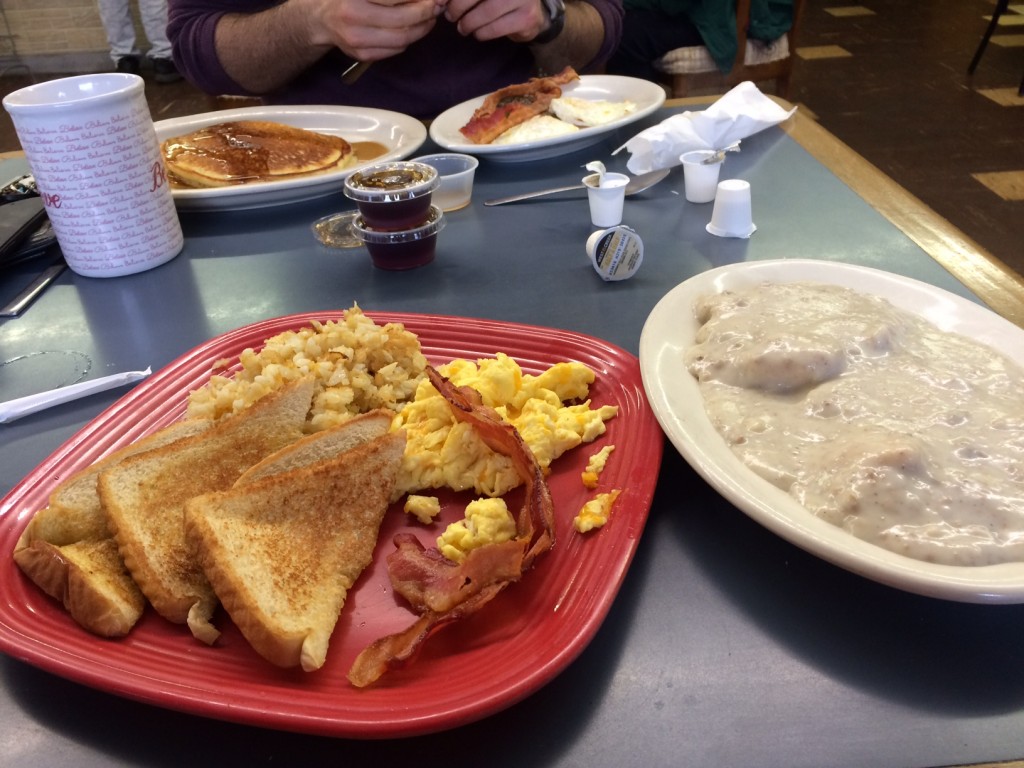 After we said our tearful goodbyes at a gas station, I drove back to Raleigh to catch my flight back to Chicago. I had time to drop by a Starbucks and organize my gear, then I sat in the back of my car, enjoying the warm weather and doing a bit of reflection.

The next day I would be giving my two-week notice at work, and this NC trip was the final test to see if my body can handle the start of my thru. The mileage we did on Saturday will be my starting mileage (~8 miles per day), and my body responded very favorably to it. All systems seem to be go on the thru hike, which is both exciting and terrifying. It’s a lot of plans coming to fruition.

So, as I sat in the back of my car and looked at the suit I was wearing 72 hours ago for work, I reflected that it would be a long while until I wore that suit again. My new suit on the trail will be a stinky merino wool shirt and some super-short Patagonia shorts. Then my thoughts began to spin out.

What am I doing? This thru-hike is crazy. I had been setting myself up for a life of stability. My life as Mr. Businessman was going very well. I was valued at work, I enjoyed the people I worked with, I enjoyed the work I was doing, and I was making enough to support myself very comfortably. But I was tossing that all away for the thru-hike. Why?

I’ve reflected a lot on my reasons for this hike. It’s clear that, more than anything, I want time to reconsider my life at this moment, and what direction to go in next. I want space to think. I want to walk, alone, and not feel guilty or anxious that I should be doing something else more efficient with my time. Guilt and anxiety are ever-present at home. I’m a bit overwhelmed, and I’m in need of some space to think. I seek the mental clarity that comes with a single, simple purpose. While I’m backpacking, I’m as clear-headed as I’ve been in years. The anxiety recedes, if only for a little while.

The reasons for doing this hike extend beyond that. I know my personal reasons, and I’m not going back on my decision by any means. I’ve never felt more sure of a decision than I have about attempting this thru-hike. This is probably just the second guessing that comes before any major life decision… right?

It’s not easy when the moment of truth arrives.

On Monday, I gave my notice at work. I sat down with my boss, who over the past few years has challenged me and supported me and developed me into the person I am today, and had to tell him I was leaving to go walk in the woods. I had to tell coworkers that I am moving away to go backpacking for six months. Lots of questions. Lots of explaining. And that night I went down for about 10 hours of sleep, because I was emotionally exhausted.

I booked my move home to North Carolina. I’m selling or giving away most of my possessions. I have a start date for Springer, 4/3.

Things are starting to roll quickly, which is scary.

I’m sure this won’t be the last anxious moment when thinking about all that is ahead over the next six months. All I can do is face the challenge set immediately in front of me. And for now, that is just getting to Springer without melting down.