After 9.4 miles I sat down for lunch beside a little sign: 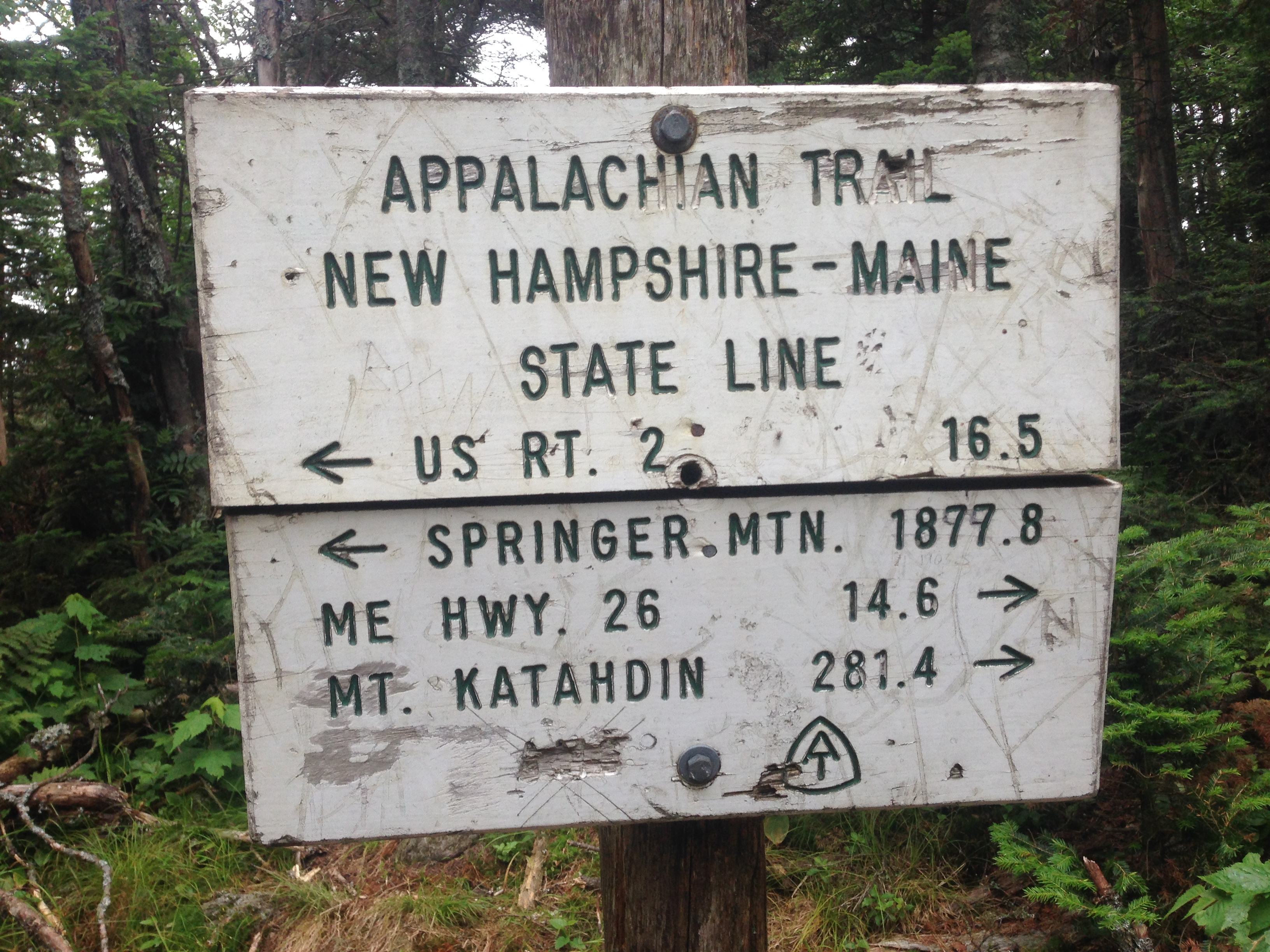 The final state. What was there to think? What did this really mean? I kept hiking.

The terrain for the rest of the day was tricky and cool. I crossed over a high-elevation bog of sorts on Goose Eye Mountain. The view was great in all directions and there were lots of plank bridges to cross. One time my hiking pole sunk four feet into muck—good thing it wasn’t my leg.

Just before stopping I caught up with Mystyr Lynyrd, Obsolete, Caboose, Oyster, and some other guys. Awesome to see these hikers again after such a long time. Amazing that these encounters even happen. I met Mystyr Lynyrd back on Roan Mountain in early Virginia. A much older hiker with frequent foot problems, every time I passed him it seemed I wouldn’t see him again. He even said he didn’t bother remembering my name for over a month because he thought I’d be too far ahead of him. But here we were! I played my harmonica for Obsolete and Caboose, as I’d owed them a song for some time.

The next morning I went through Mahoosuc Notch, “the toughest mile on the trail,” with these guys. And those aren’t scare quotes, that’s what people really call it, and it’s really true. Mahoosuc Notch is a mile of mad boulder scramble: crawling under and over ten foot boulders, jumping from rock to rock, etc. It’s a crazy geological feature; the rocks act like ice cubes so that even now, in July, there’s snow tucked into the crevices beneath the rocks. When you jump down the temperature drops ten degrees. Opinions are split on the Notch: it’s either awfully fun or just plain awful. It takes at least an hour to cross it, to give you an idea of the difficulty.

After that was a big steep climb up Mahoosuc Arm to the summit of Old Spec. A 1900ft gain before a  2500ft descent before another 2100ft gain up Baldpate Mountain. Maine’s trails are so twisty and wild compared to New Hampshire’s that this section is sometimes considered to be even harder than the Whites. I’d say it’s pretty close.

On Baldpate, however, the difficulty was overshadowed by just how damn awesome it was. There are two peaks, and when you get to the first one you get a view of the second one over a saddle. The whole thing is bald. Huge slabs of granite, the trail a zigzag of cairns. The sight of such a massive boulder in front of you, every feature and path in open sight, I just love. I ran and scrambled from cairn to cairn. I felt like an epic Nordic warrior charging a dragon’s roost. A bit like Beowulf, I suppose. This was one of my favorite mountains on the trail.

This picture is of the second peak from the first, but it doesn’t do it justice. In the photo you can’t see how large those patches of bald rock are; in life you really are walking in the open: 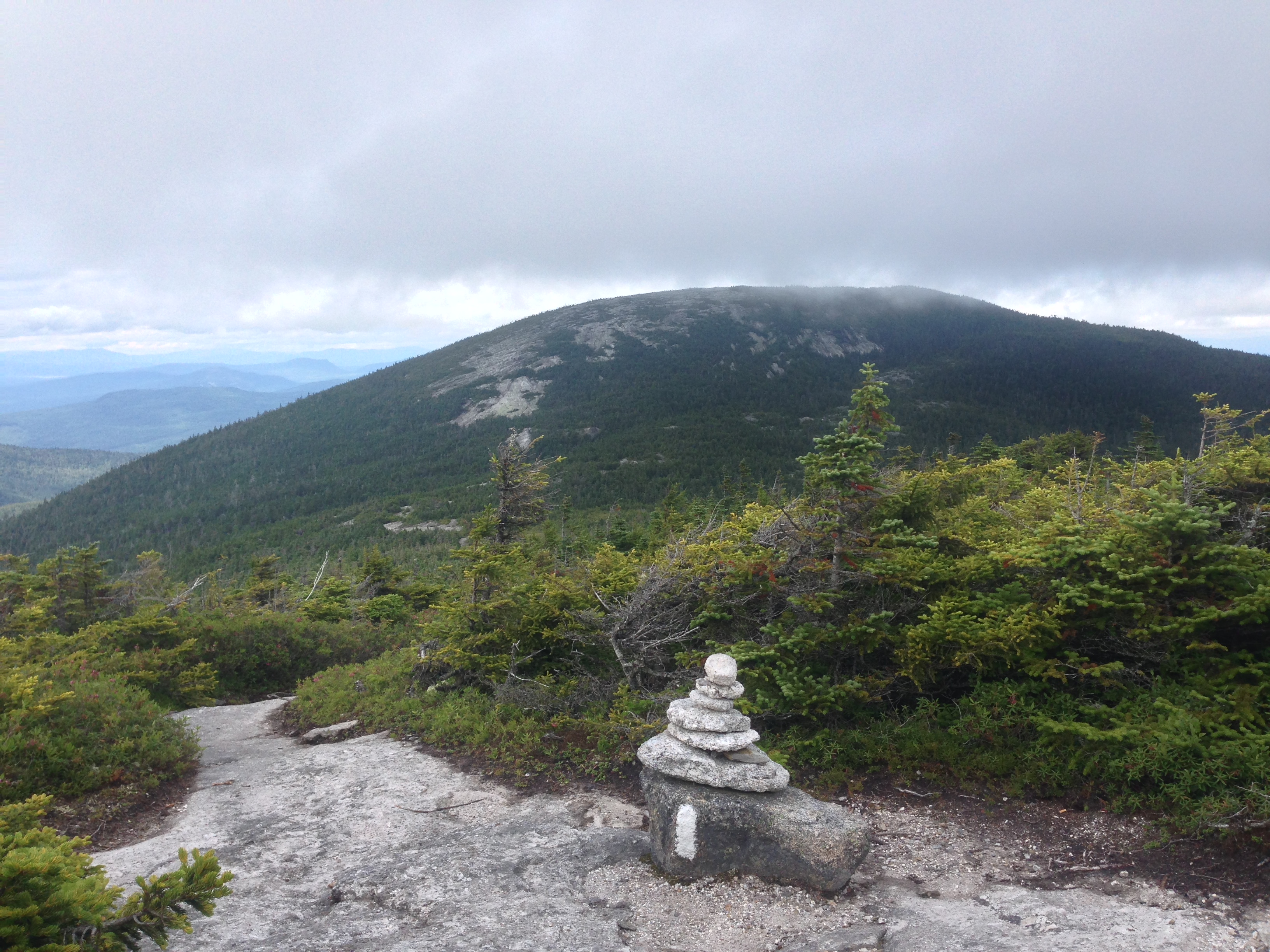 I camped near Frye Notch Lean-to and met a cool southbounder named Mudsocks (not because his socks were muddy but because he hiked in sandals and his feet cased in mud in place of socks, he explained to me).

The next day, number 141, I planned to resupply. The plan was to hitch into Andover, ME from East B Hill Rd, but to my dismay this road was not a major one. In thirty minutes I saw one car. No cell reception. I was ready to eat scraps for the day and hike to reach the next road tomorrow when a second car miraculously appeared and stopped. I got in the car.

There were three guys, all with dental problems, and a case of Bud Light. Unable to stop laughing about nearly every word, they explained that they were on a fishing trip and getting gas before they found a lake. This fishing trip was going to be a huge success compared to the last fishing trip, because this time they have “licences.” The guy in the passenger opened another Bud. He was beyond trashed. This is about 9:00am.  He waved some papers at me, giggling. “We got laischenses!” he said. Last time they got fined for not having fishing licenses. “And we brought’m s’time! He gotta driva laischense!” he said. The guy sitting beside me—you could say he had dental problems or you could say he had no dental problems—had the driver’s license. The thing was, he was from Tennessee and didn’t know the roads like the driver knew the roads, so he wasn’t driving. This was uproariously funny, and we all had a good laugh.

A long 15 minutes later I was in Andover. My fortune continued to turn around when I discovered the Little Red Hen restaurant had an all-you-can-eat Sunday brunch going on until 10:00am. Not only that but the food was top notch. All the essentials plus biscuits and gravy and phenomenal cupcakes and cinnamon buns. Being one of three restaurants in the whole town I was impressed. I resupplied, charged up, and made some phone calls.

The hitch back was less notable.

Near the end of the day I met a SoBo woman named Grendel. We didn’t fight.

I tented on a sweet ledge looking on the next mountain, if only the clouds had cleared. 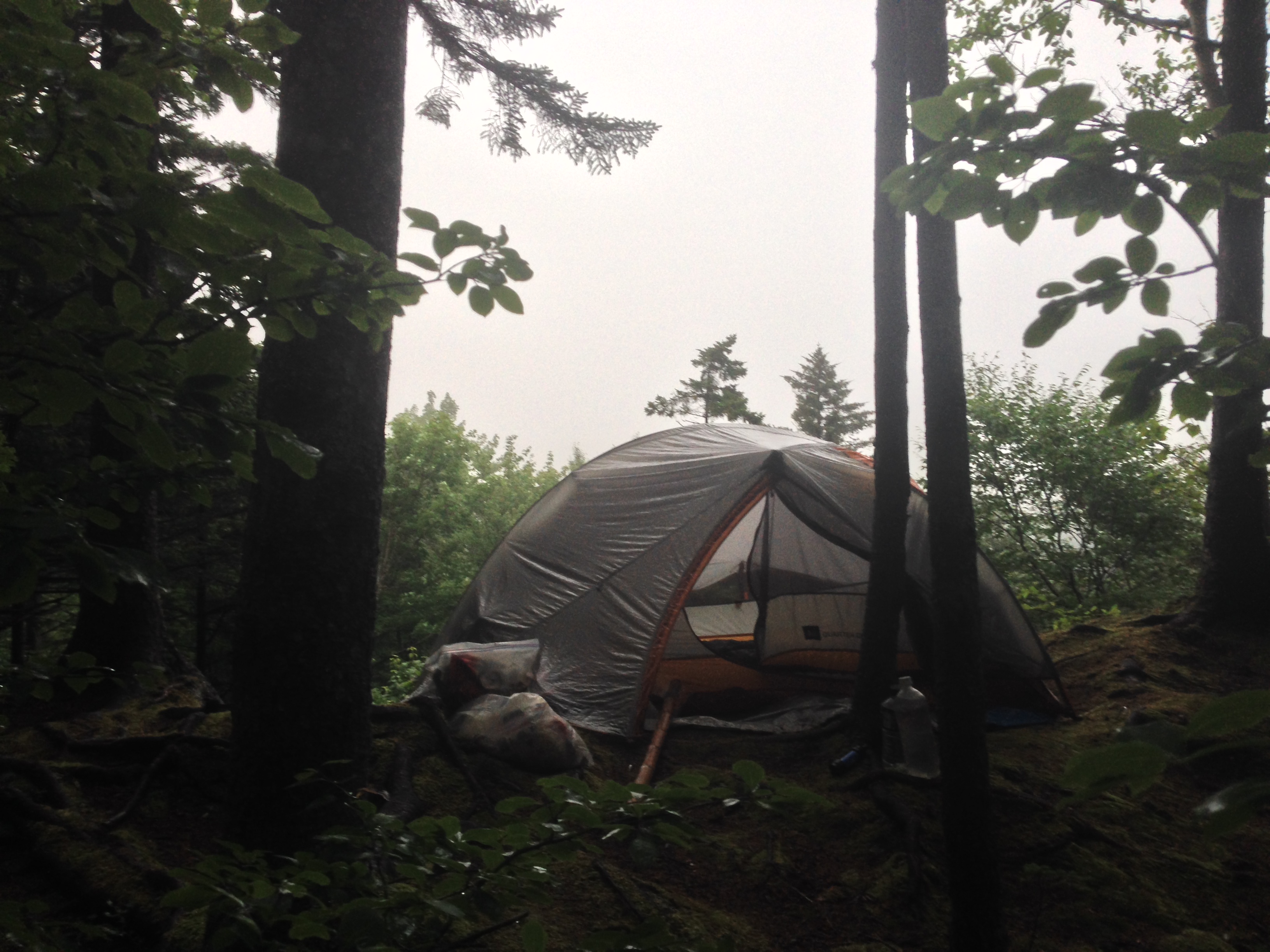 Day 142 started out tough and overcast. I up-and-overed several peaks in a row. Then later on it cleared up nicely. Lakes, lakes, as far as the eye can see: Maine beauty. 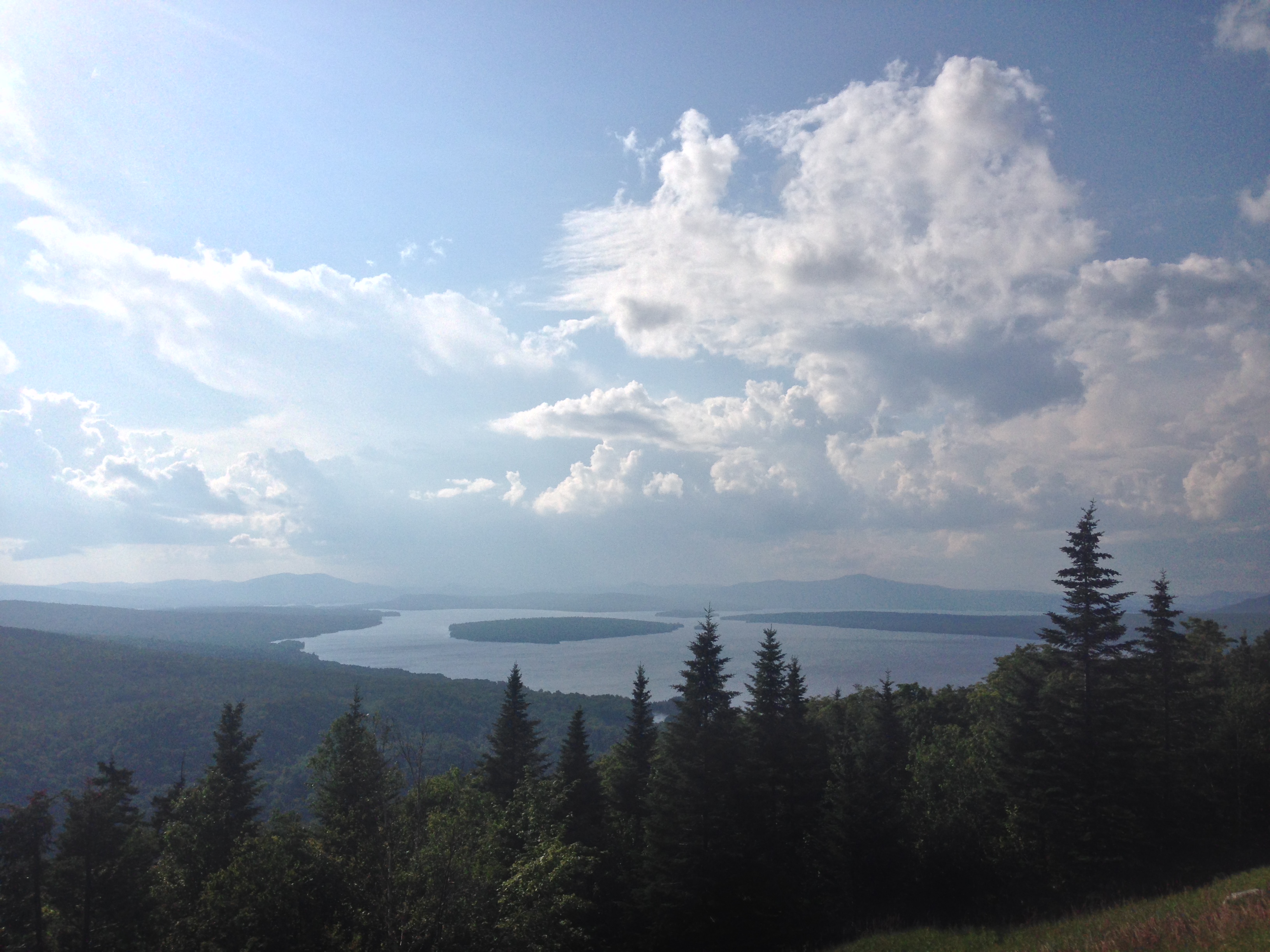 The next morning I was off to meet my grandmother (my mom’s side this time)  and my uncle Mike. In a microtragedy I encountered a beautiful rowboat just sitting by the trail, untied, a sign saying not to bother research equipment in the lake but not not to take it out for a cruise . . . just look at it, look how inviting that is: 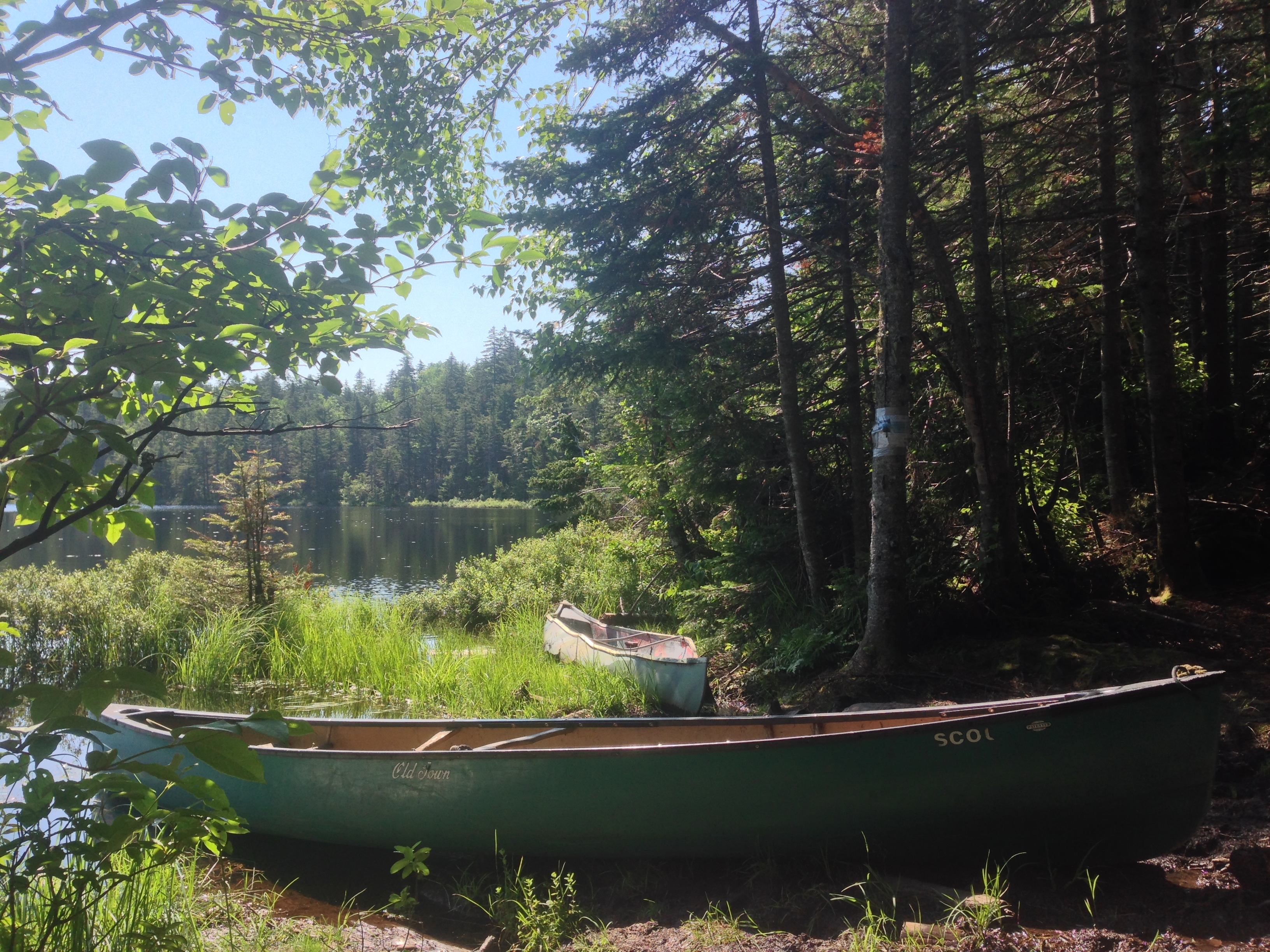 The tragedy was simply that I did not have time to go rowing. I didn’t want to miss my family at the road. I’ll have to go back sometime . . .

But of course meeting my family was far more than worth it! There was lunch involved, yes, but even better it was special to share this connection to the Maine outdoors with two people I admire. My grandmother has climbed many mountains and traveled many places in her lifetime, including all of the 4000ft mountains in New England. She’s already walked most of what I’ve walked through Maine and New Hampshire. Her trail name is Wolf; my aunts and uncles call her that sometimes, something I hadn’t really considered when I got the name Beowulf. So now it was “Wolf meets Wulf” as Mike called it. My uncle is a high level athlete himself, and I’ve always been amazed by what him and my other uncle, Bill, do outdoors. Mike has biked, kayaked, and climbed all over this state (and planet). It was at his condo in Jackson where I stayed. This trail is the most outdoorsy, athletic thing I’ve ever done and it felt great to be able to share something with them that I hadn’t before. A special photo at the top of the post.

The previous night I’d stayed at a shelter through a rainstorm with thru-hiker “JustGreg.” We chatted about how much we enjoyed the style of trail in Maine. He came by while I was meeting with my family and we gave him a sandwich. That night we stayed at the same shelter again. A German hiker named Breakless arrived too. A chemical engineer with zany blonde hair and beard, I can still hear the jolly, tangy lilt of his accent.