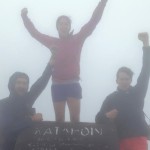 We left with no rush since we had to wait for the 2:00PM ferry. The day started as usual with me being a klutz and slipping off bog boards into some swamp. There was a nice pond at the next shelter, so to clean up a bit I dipped into the water. I quickly got out though as soon as I noticed a leech trying to latch on. The lakes in Maine are beautiful but the leeches will keep me out. We crossed the Kennebec River in the ferry canoe and made a pit stop to Northern Outdoors to eat, hang out in their hot tub and shower. We were going to go 20 this day but I convinced Backtrack to tackle their burger challenge that knocked him out and he was too full to make it to the shelter

Backtrack, Towanda and I had a good day of hiking with lots of blueberries lining the trail. It started to rain and we found a stealth site along the river. Another thru-hiker came by and camped with us as well.

We woke up confused since Towanda ducked out early without saying anything. We hiked on and assumed we would find her in Monson. On the way into town I was stung by a hornet. It just swooped in, left my wrist in a ton of pain and flew off as quickly. In town we found Towanda who hiked ahead for food. Meatstick was in town as well and I even got to meet his mom.
$30 hostel, $45 resupply, $2 beer, $12 food

Backtrack and I got some breakfast, I grabbed some more food and we headed into the 100 Mile Wilderness. We weren’t sure how to coordinate getting back in with Towanda so we just made a meeting point. I fell as usual and got some more bruises and Backtrack fell as well and hurt his knee. We decided to cut the day short not to aggravate his knee and left a note for Towanda. It immediately became clear that my hiker hunger was kicking in… rather late on the trail. Rationing would be hard for the next few days and we were already behind. I took some Benadryl with dinner for my hand, which was insanely swollen today, and fell asleep at 6:30PM and slept for the rest of the night.

We planned a bit farther today but got caught up in a lot of rain. It had poured during the night and the fords were all pretty high and the trail barely had a dry spot. We decided to stealth camp after the river ford because it looked like it was about to downpour. It downpoured just as soon as Backtrack got his tarp up. The river was wild after that, if I hadn’t crossed 10 minutes earlier I would have been stuck on the other side.

Today was the intimidating day that we were tackling White Cap. After getting started it was clear that the trail was a bit more forgiving and we were all feeling good. We knocked out all our miles in good time today and relaxed next to the falls.

The trail was the flattest and cushiest it’s ever been today. This was the fastest and most prolonged hike I’ve done on the trail because of that. I did the first 11.4 miles in 3 hours. After this I got pretty lazy but the group of us mostly stayed together and chatted to make the last bit go faster. We stealth camped near a beautiful lake and had a lot of time and a campfire to enjoy.

The day of hiking was pretty relaxed and we were able to enjoy another great view of Katahdin. On our way to the shelter we stopped by Rainbow Ledges and hangrily picked and ate a ton of blueberries. I never did see a moose in the 100 Mile Wilderness but I did see a marmot that was adorable and looked like a cross between a ferret and a fox. Once at the shelter we all finished off the rest of our food bags.

After getting up early we made our way to the Abol ridiculously overpriced camp store where we ate a whole ton. Towanda had ran ahead to get our name on the list for the Birches but a ridge runner had come to the group of hikers eating and let us know the site was now full. We knew of at least 6 more hikers coming to the site while Katahdin Spring Campground was full as well. My parents got a house in Milliknocket so we decided to give up our spots and opt for beds. I called my parents then we continued to hike into the park. It was smooth, flat and relaxing. Once we reached the campground we got to see the Fonz and we waited for my parents. We had a nice dinner and got some good sleep.

After a hearty breakfast my parents took us back to the trail. We started up the trail and it was steep and painful. While approaching the Tablelands and above, it became cold and very foggy. The wind picked up as well and was so strong that it almost knocked me over a few times. Once we reached the summit sign it was unbearably cold and we had almost no visibility for our summit photo. We also started down quickly so we wouldn’t freeze to death. The way down hurt my knees worse than the way up but we were able to get a little bit of a view halfway down. The it was over. In the parking lot on the way down I received the only trail magic of Maine then made it back for the rental house. Towanda left with her parents and Backtrack was getting a ride back with us. We picked up food and Backtrack and I bought real people clothes. At the house we were lazy, took showers, cooked, did laundry and just enjoyed a relaxing last night before the long haul home. 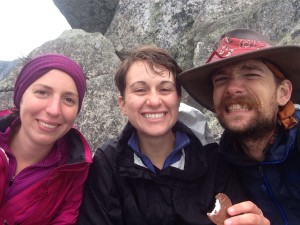 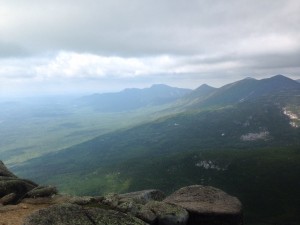 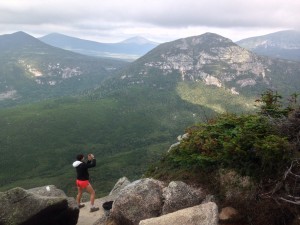 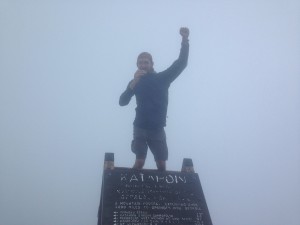 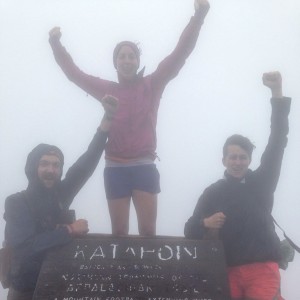 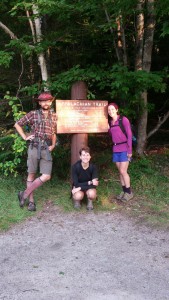 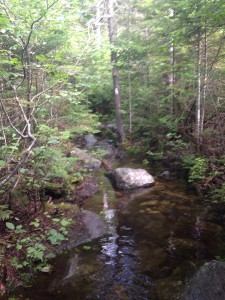