Note:  This is being posted from Woodstock. I’ve fallen behind due to poor cell coverage. We’ve completed the Presidentials and just got down from Francinia Ridge. I’ll get that update out later today.

I’m looking at New Hampshire in phases. The first phase was to get to Gorham. After that, we have:  the Carter-Moriah Range; the Presidentials; the Franconia Ridge; the Kinsmans/Moosilauke; and Hanover. We plan to resupply in Lincoln/ Woodstock. After that, we’ll see what’s next.

The first order of business was getting to Gorham. Once you cross the Maine/New Hampshire border there are still 16 miles and several mountains in the Mahoosuc Range to cross. This took us a day and a half, and we arrived at the White Mountains Lodge and Hostel just after lunch on the 4th. 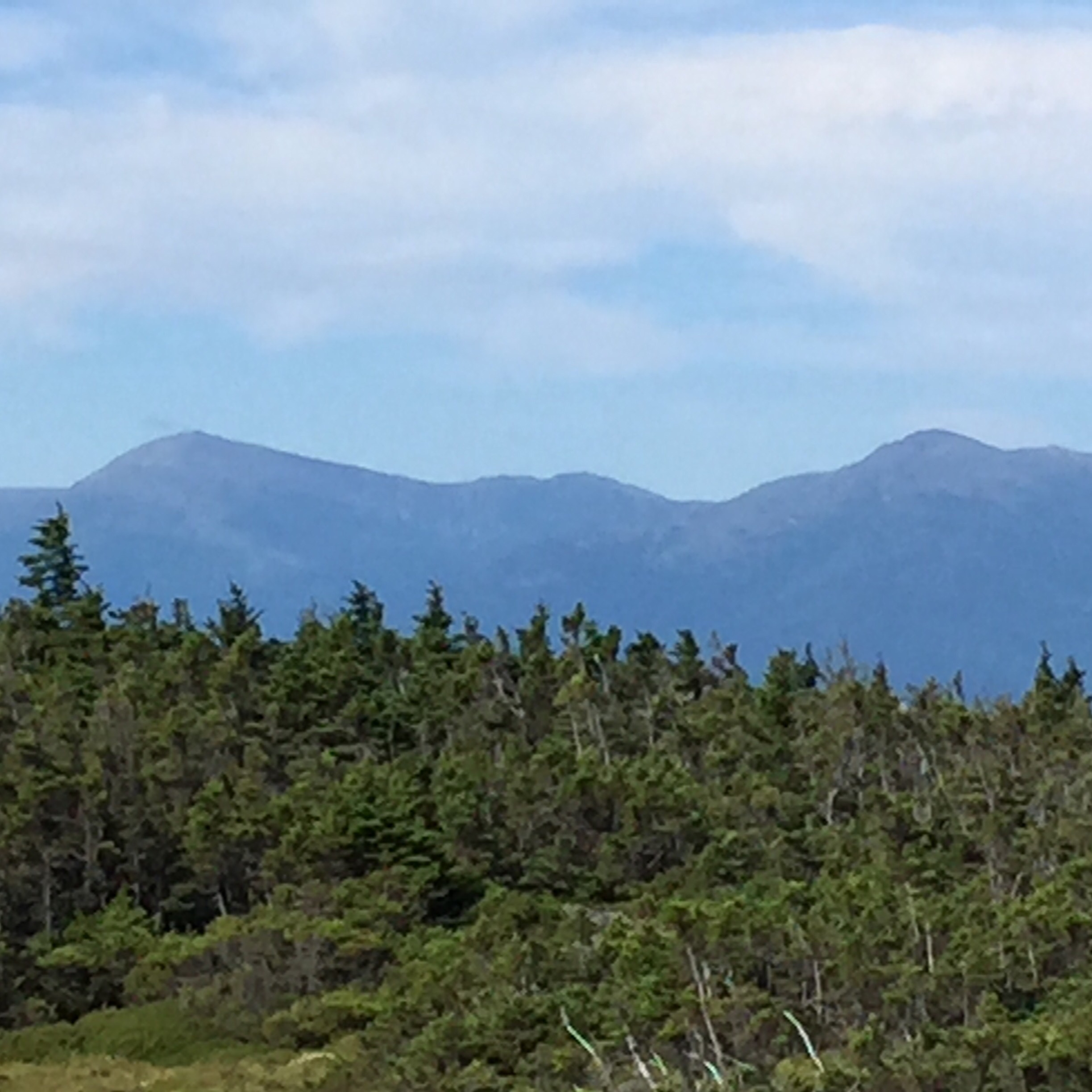 First look at the Presidentials from Mt Success

This is a great place and I would recommend it to anyone. It was full every night and we met a lot of NOBO and SOBO thru-hikers – including Scott Jurek,  who stopped in for a shower and a quick break before rushing on to Maine. 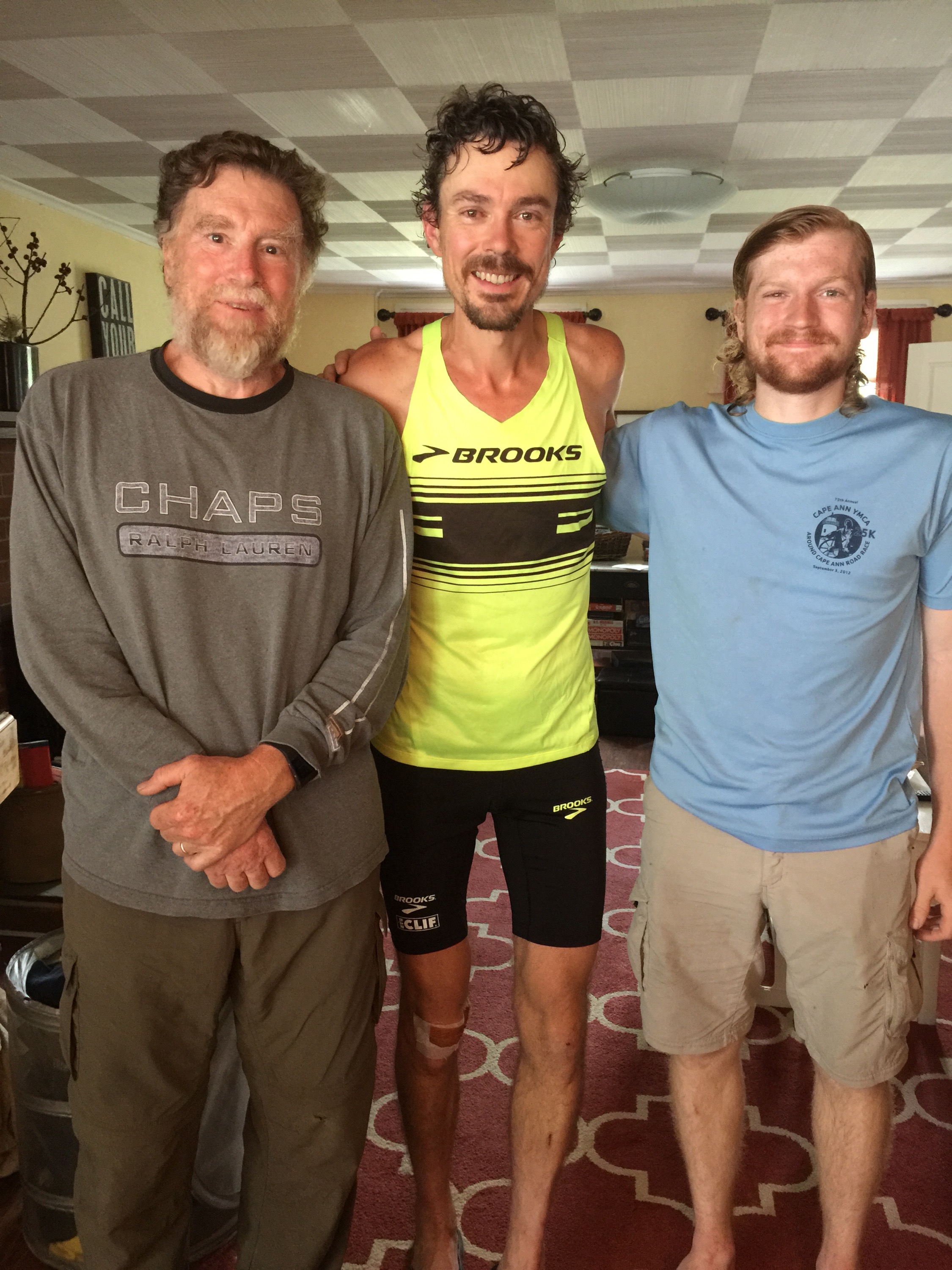 We zeroed on Sunday and my wife, Linda, came up with one of my other sons, Mark, and his girlfriend, Amy. The afternoon was spent at an all-you-can-eat Chinese restaurant, then at EMS and Walmart for resupply.

The next stretch in New Hampshire is 21 miles from Gorham to Pinkham Notch. This stretch includes the Wilcat Mountains, and the Carter-Moriah Range. A lot of people are shuttled to Pinkham Notch, where they slack pack back to the hostel. We decided that 21 miles was too much for us in one day, so we planned a one night stop. Not exactly slackpacking, but our packs were definitely lighter as we only took what we’d need for one night. 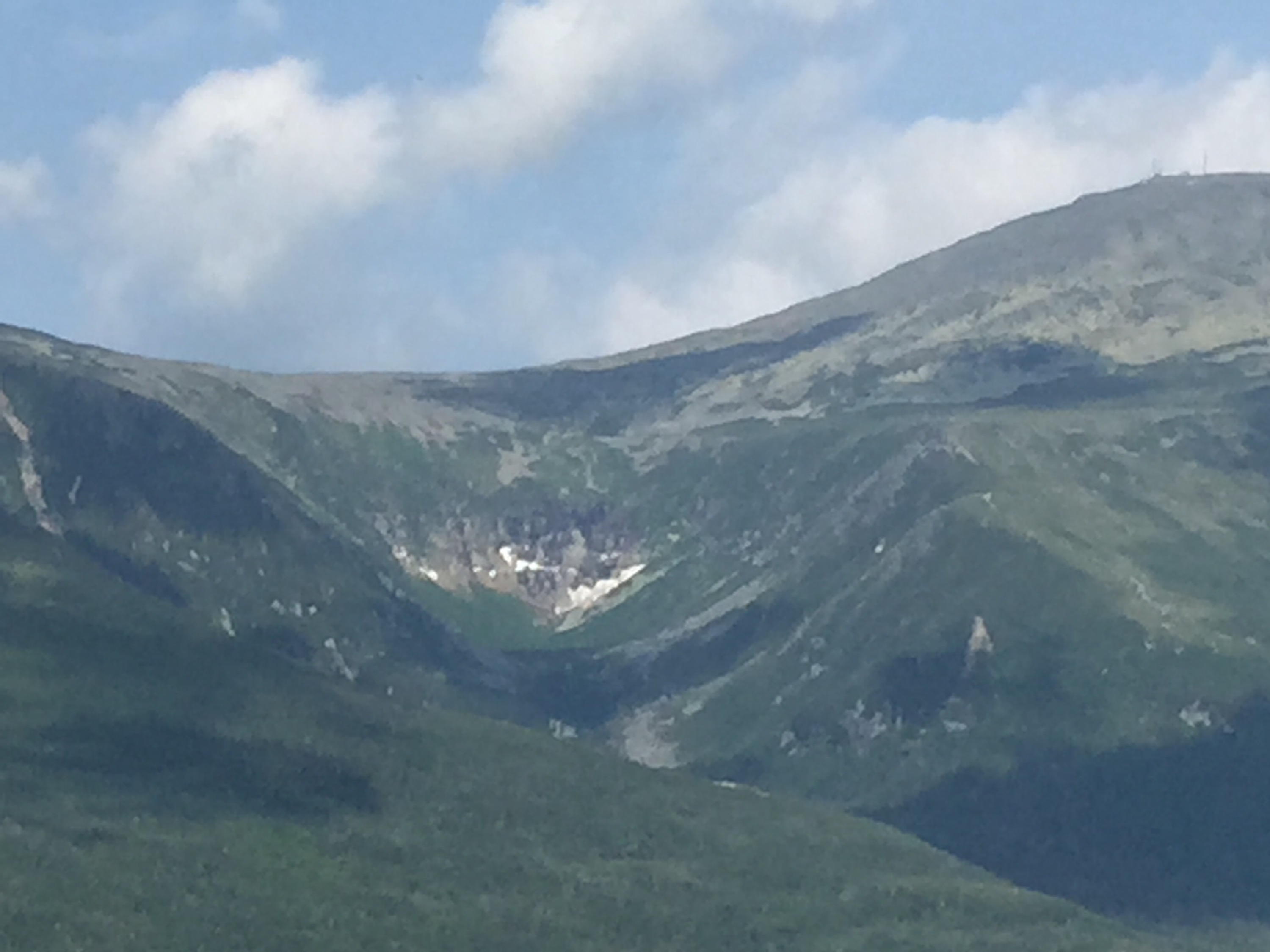 Mt Wadhington from Wildcat. Snow is still in Tuckermans Ravine!

This was the toughest stretch yet.  The first day we trekked across a whole bunch of 4,000 footers. We also did 14 miles, and it took us almost 12 hours, so it was a long day, a long distance day, and a high elevation day. We started at Pinkham at 8:30 and reached Imp Shelter at 8:00PM.
We stopped for lunch at the Carter Notch Hut. It was our lunch, but the cook at the hut gave us lemonade and some blueberry pound cake, so it was a gourmet lunch. He is a college student at Middleberry.
Later in the day, we passed Treasure Hunter and Artemis heading south. They were surprised to see us going the other way, until we explained what we were doing. 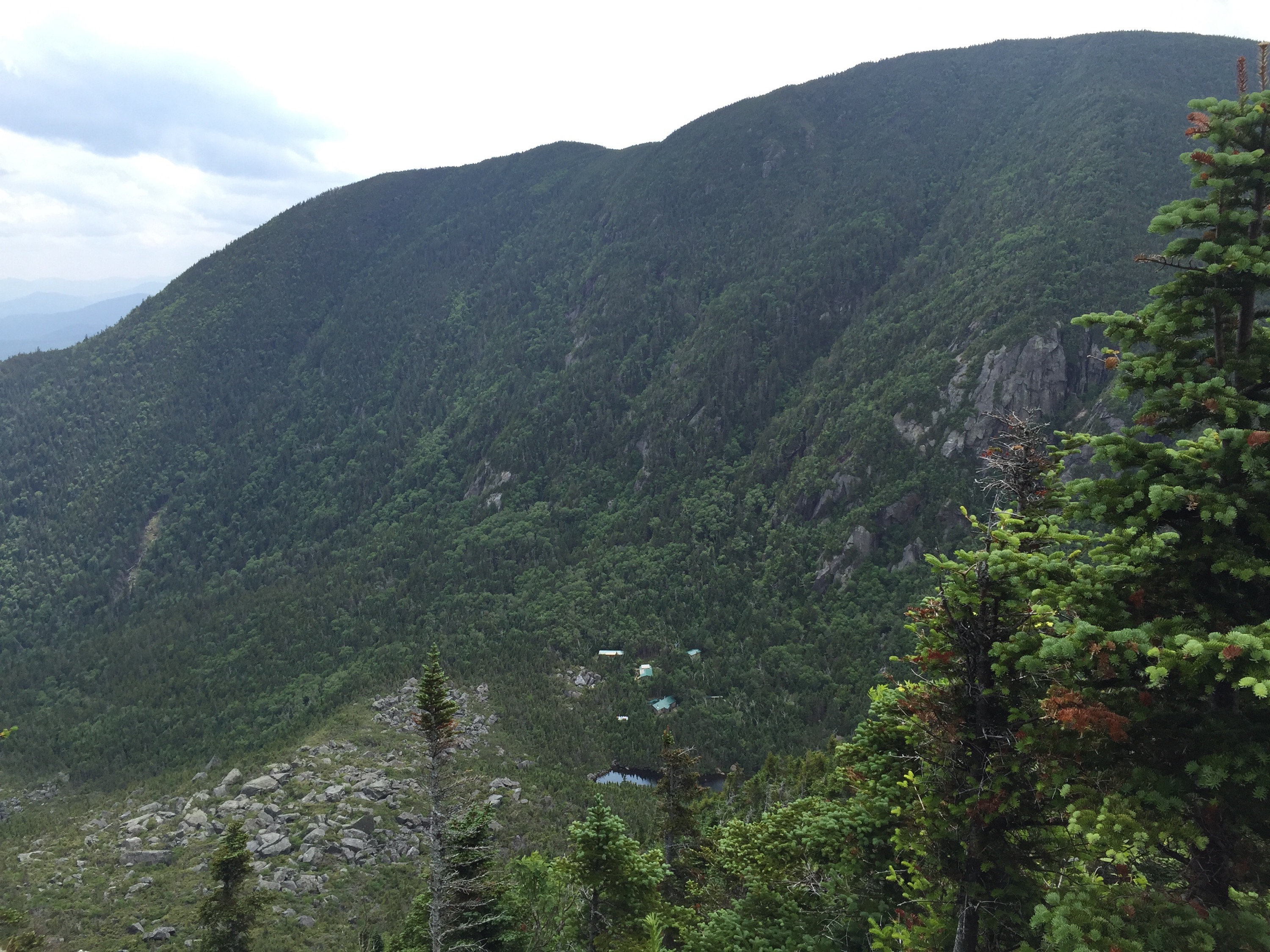 We were the only thru-hikers at the shelter. There was a group of camp counsellors in training there, but they were in one of the group tent sites. The leader stayed in the shelter with us, but spent most of his time over there.

The next morning we got up and hiked the remaining 7 miles back to Gorham and the hostel. We only had one mountain to climb, Moriah. It’s 4,949 feet and the last mountain in the Whites if you are a north-bounder. Next stop to the north are the Mahoosuc’s. 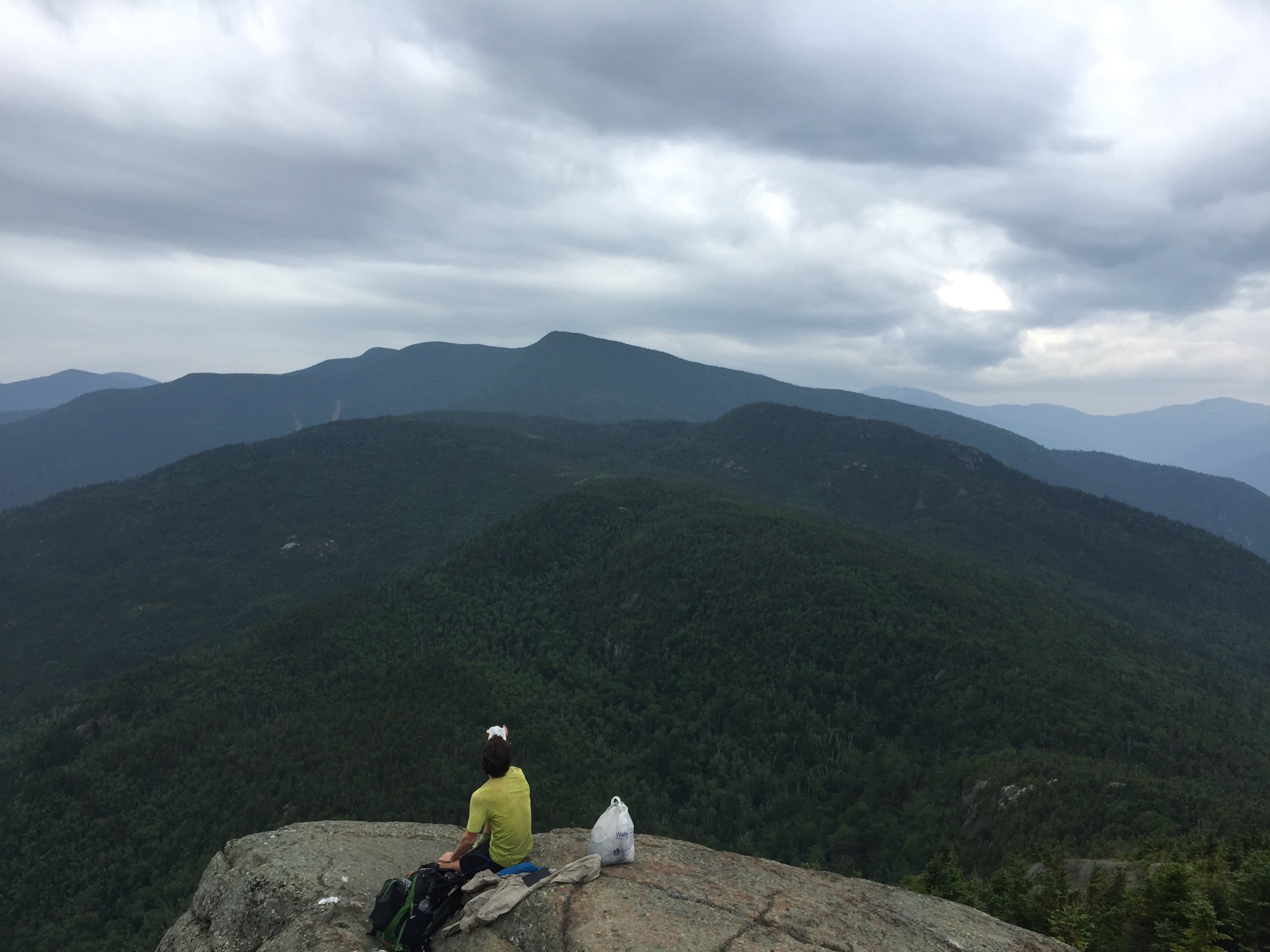 Look back at Carters from Mt Moriah

We tried to hustle along but with ascents and descents and with rocky obstacles, sometimes it’s hard to increase the pace – at least for me.

We stopped for lunch at the Rattle River shelter. We met a flip-flopper named Red Checkerboard. He started in the Shenandoah’s and will head south from there once he gets to Katahdin. So we may run into him again in the south. We had a fun conversation.

We also ran into Slingshot! He was heading south along the trail and was also surprised as to our direction until we explained the shuttle. Sling got off the trail and went to Bethel Maine, then walked to Gorham along railroad tracks. He spent the 4th there and got to shake Hillary’s hand when she was in the parade. He zeroed a couple of days and was now heading south again

We got back to the hostel at about 2:30. We’re all packed up for tomorrow. The plan is to pick up at Pinkham Notch and head for the Osgood Tentsite. That will keep us below the tree line in tomorrow’s bad weather. Thursday, we’ll head up the Osgood Trail and try to reach Lakes if the Clouds hut for work-stay.

The picture is the view of Mt Washington from Wildcat A. Notice the snow that is still in Tuckerman’s!