After getting a tad lost on some back roads, my mom and I arrived at the Springer Mountain parking lot on a misty Sunday afternoon. After a hug and an awkward “let’s get this show on the road” kind of goodbye I was off.

Off to a good start

There’s a sign right in the trail with some information about the area and an arrow pointing to the left that says “Springer.” There’s a small footpath right there so myself and a father-son pair head out. Within a few seconds we discover the trail goes nowhere but back to the start. After pondering this for several minutes some kind soul informs us that the trail to Springer is to the left across the road. This circular path was clearly made by other confused souls.
Two minutes in and I’m already lost. 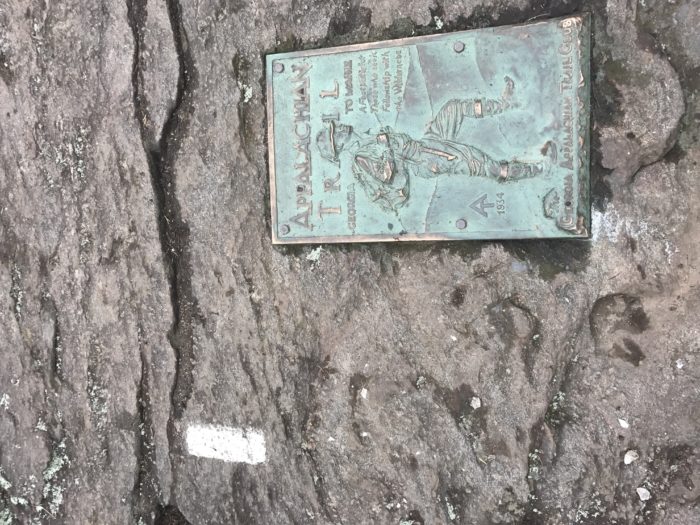 The day turned out to be amazing. After a misty summit the sun came out and the temps rose into the high 40s. I spent a few hours hiking through the gorgeous piney woods of northern Georgia hardly seeing a soul. Let me tell you, if you see a blue blaze that mentions a waterfall, you’d best take it. 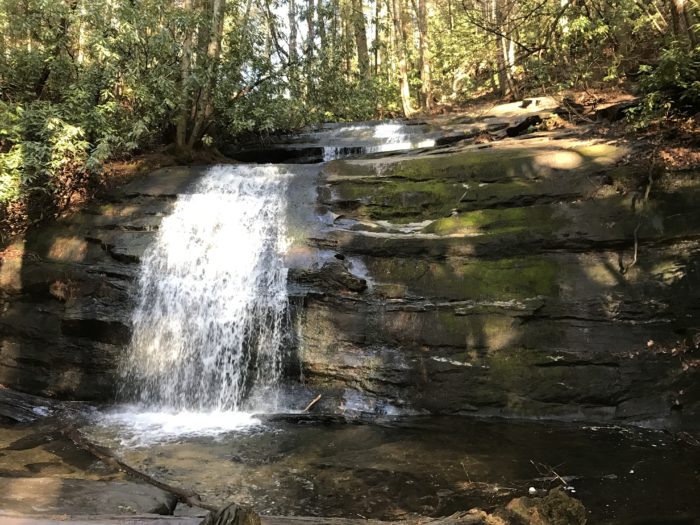 It was such a nice day I couldn’t make myself stop. I pushed towards a camp site just south of Hawk Mountain, getting there too late, and quickly (and not too well) set up my hammock and set to making some dinner. Turns out, like many they hikers, I wasn’t actually hungry, which worked out because my fuel canister crapped out on me.

That night heavy winds ripped through camp, keeping me awake most of the night. I got up at first light and got the heck out of there, bundled up in the face of a dismal day and several mountain ascents. 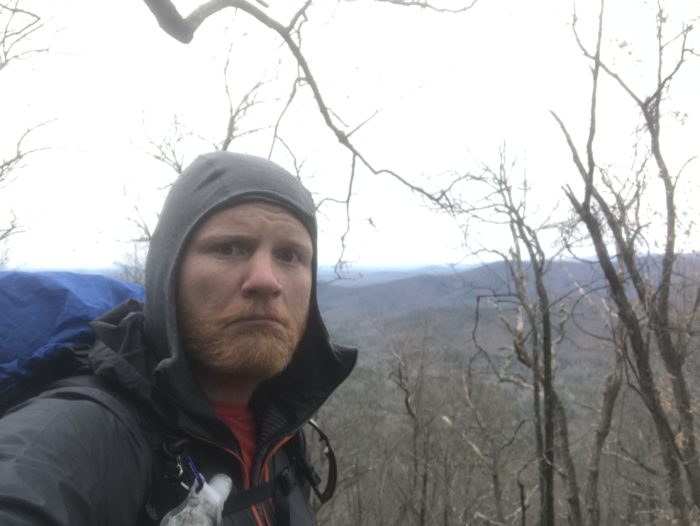 Bookended by two smaller mountains, Sassafras stands tall, waiting to laugh at you. You round a switch back, suck some wind, and look for another spot maybe 20 to 40 feet distant that looks good, and power to it to reward yourself with another break of gasping for air.

I hadn’t really spoken to any other hikers yet so I was excited to smell a camp fire a few miles north at Gooch Gap shelter. A lively crowd and a huge fire did well to lift the spirits of most hikers, though a few were not prepared for the below freezing weather. In the low 20s I squeaked by in my 20 degree quilts and got as good a night of sleep as I could have hoped for, and woke to the kind of morning you’d expect in January and February. 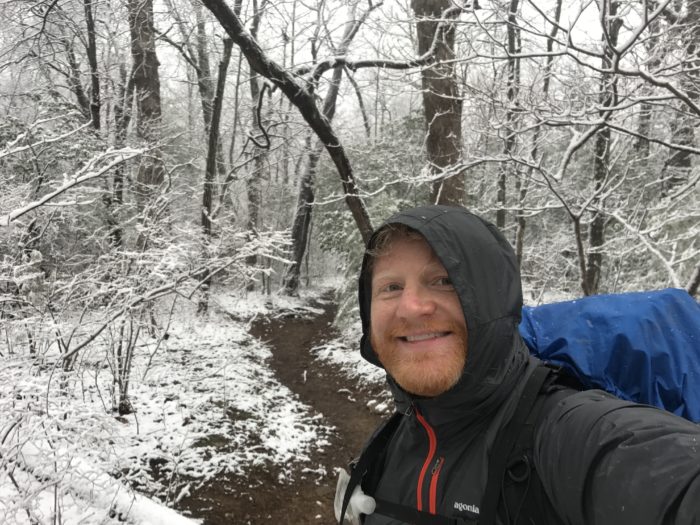 Tuesday was a low for a lot of hikers out here. Some of us entertained the notion of pushing to Neels Gap, some 14 miles distant, and grabbing a bunk at Mountain Crossings Hostel. In the end I chose to stop at a shelter four miles shy with a few other guys and knew right away it was a bad idea. Without a sleeping pad for bottom insulation staying in a shelter is a no go, and it was full anyhow. I tried to use the shelter as a wind break, pitching the hammock and tarp as close as possible, but it didn’t matter. Halfway up a mountain with temperatures falling into the teens and 35 mph gusts, we knew we were in for a bad one. 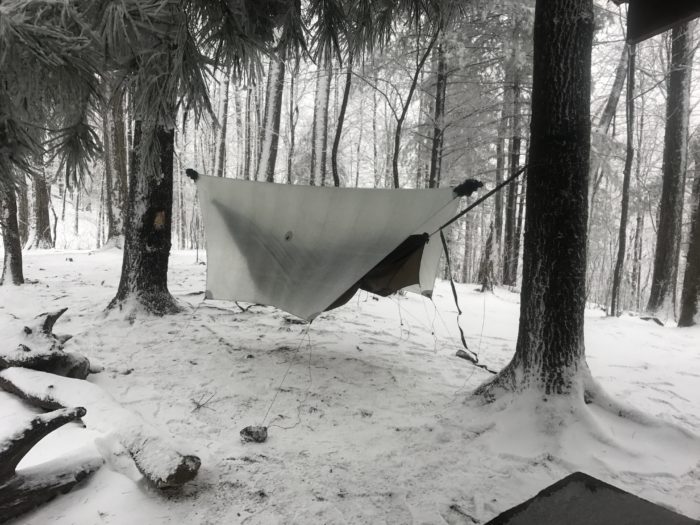 I crawled into the hammock around 7, knowing I was staying in there for 12 hours. Wearing a base layer, hooded fleece, windbreaker, puffy, and my rain jacket, I was warm enough but for my feet, which were bricks of ice and would only get worse. By midnight the winds kicked up and all warmth was gone. I spent the night curled into as small a ball as possible, one hand constantly adjusting my top quilt for warmth, the other rubbing my frozen feet.

No one bothered to make breakfast when dawn mercifully broke. Eating snickers bars with shaking hands, we stuffed everything into our packs and beat feet as quickly as we could towards Blood Mountain.

Blood is tall, almost 4500 feet, but the ascent is not as brutal as Sassafras. It was good to get some warmth flowing through the veins, and we were all excited to get to the gap, where we had reservations at a warm cabin. After days of snow and mist, it was great to to finally have some clear skies, and Blood rewarded our efforts with gorgeous views. 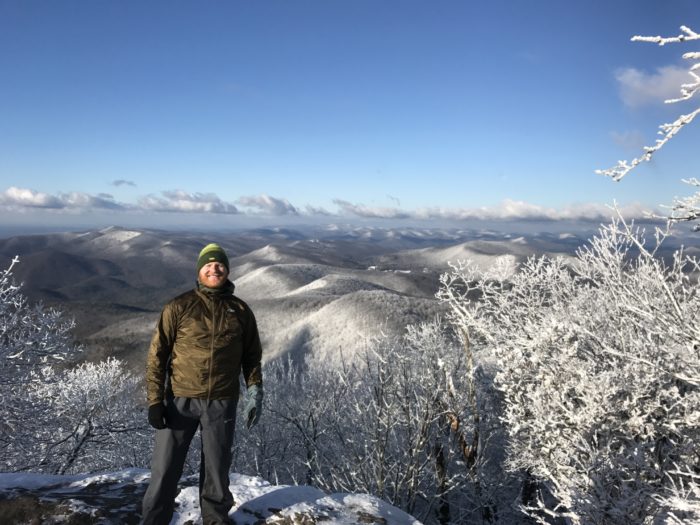 We met a real character at Mountain Crossings, who looks JUST like Stifler, and he joined the guys in the cabin next door. He mentioned going on a beer run, which to me seemed a brilliant idea. I gave him a 20, not sure if I’d ever see him again, and was rewarded soon thereafter with a case of Miller’s finest. In under 45 minutes he caught a hitch to town, bought beer, and caught a second hitch back.

People talk about the roller coaster that is the AT, and now I get it. In twenty-four hours I went from freezing on a mountain with a 2 degree windchill to swilling High Life in a warm cabin 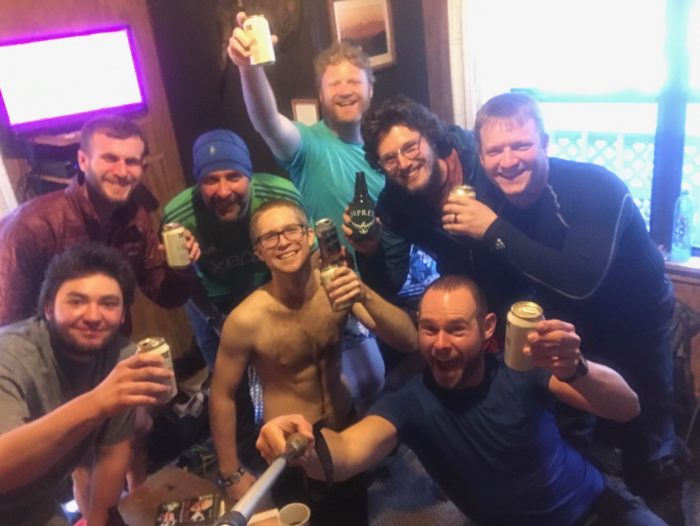 Tomorrow, after a quick stop at the outfitter to grab some food, it’s on towards Hiawassee.