My last catch-up post had me flying across the Atlantic in order to get to the right continent and left me in Colorado with my family, about to embark on a road trip to Georgia with my dad and his brand new camper. Read along as we cross the States!

The Journey South. And then East. To go North.

I only had a couple of days in Colorado before we were to head off, which meant that most of my time there was spent unpacking, packing and repacking boxes and packs, making repeat trips to REI (because why remember to buy everything in one go?) and hanging out with family. A definite highlight was trying to get a phone provider to set me up with a plan for my European cell phone. That day I learned that all cell phones are not created equal.

Of course, the day we were supposed to leave was the day my eReader froze and I scrambled to find some sort of replacement, ultimately meeting up with my cousin at Costco so that I could borrow an old tablet of his (of course, when I finally got to Amicalola Falls my eReader had unfrozen..). After that, though, we could finally set off. I was nervous. I was actually, truly, heading in the direction of the trail now, not just flying over it. 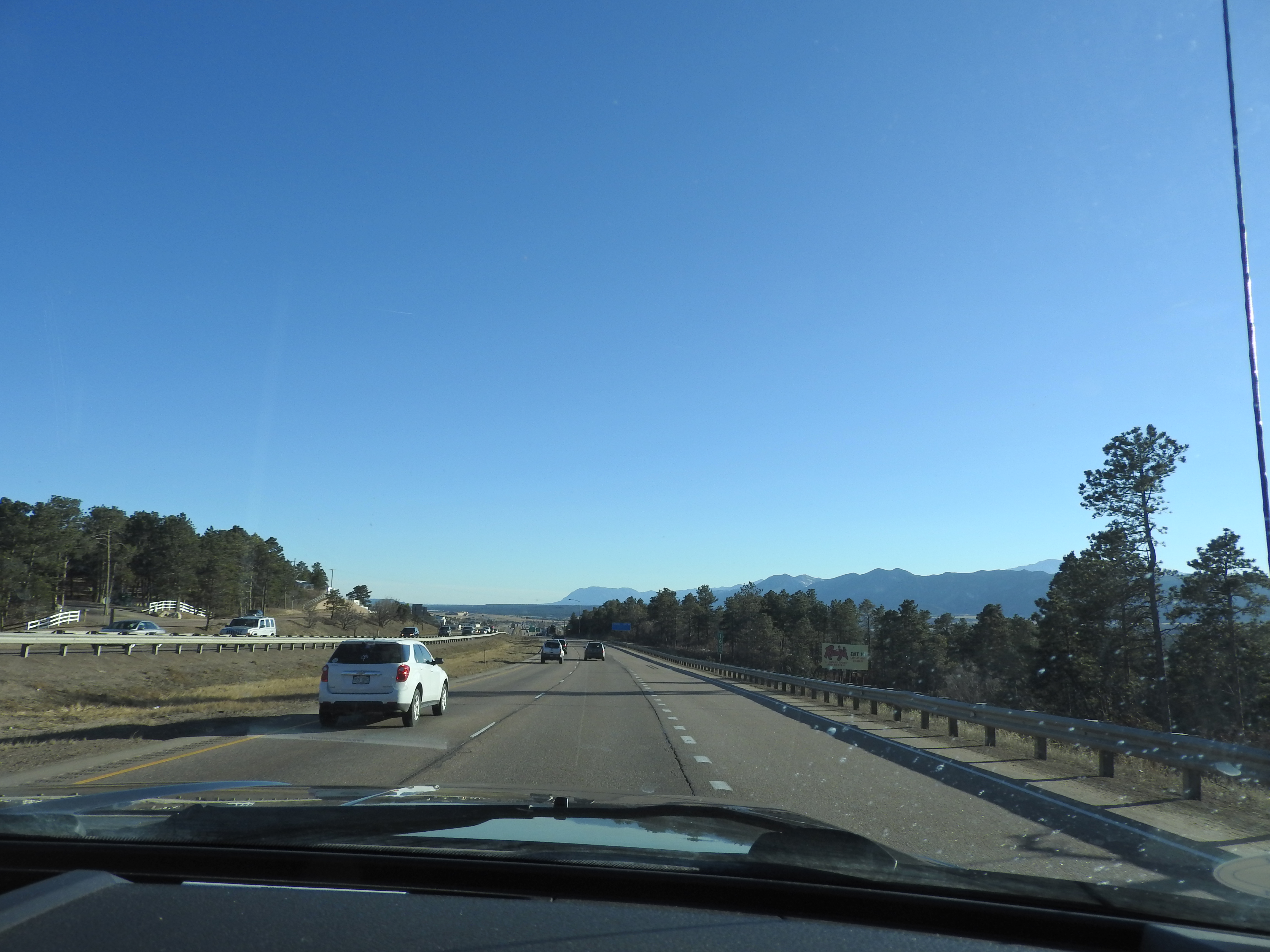 After my snowy reality check in Iceland the weather in Colorado was almost frustratingly beautiful. I had never imagined a February at a mile elevation could be this balmy. Had I bought all this winter gear for nothing? (Spoiler: No I did not.. just wait until I tell you about the Smokies!)

The road trip started off great; we missed our exit. No worries, though! We would just head South through Colorado Springs and then head East from there. I was happy – it meant I got to see the mountains a little longer. For the home of Big Agnes, Colorado Springs looked remarkably unremarkable. In fact, it was actually a little disappointing after Castle Rock (a little town named after the huge rock that looks like it has – surprise – a castle on it. I had trouble believing there wasn’t a castle until we got close – I can only imagine how confusing that must have been for past explorers). That night, we ended up in La Junta where we stayed at the hotel right next to Taco Bell.. because that’s what you do on a road trip.

The next day was leap day and it started off great with hot cinnamon rolls. That’s actually something I made a note of in my journal. As you can see, I was a hiker at heart already. We continued South-East from La Junta. We were definitely hitting Middle of Nowhere territory and took a short detour in the Oklahoma Panhandle to see Picture Canyon. Because we didn’t really have time for a hike, I did not actually see the famed pictures. I did, however, take them. 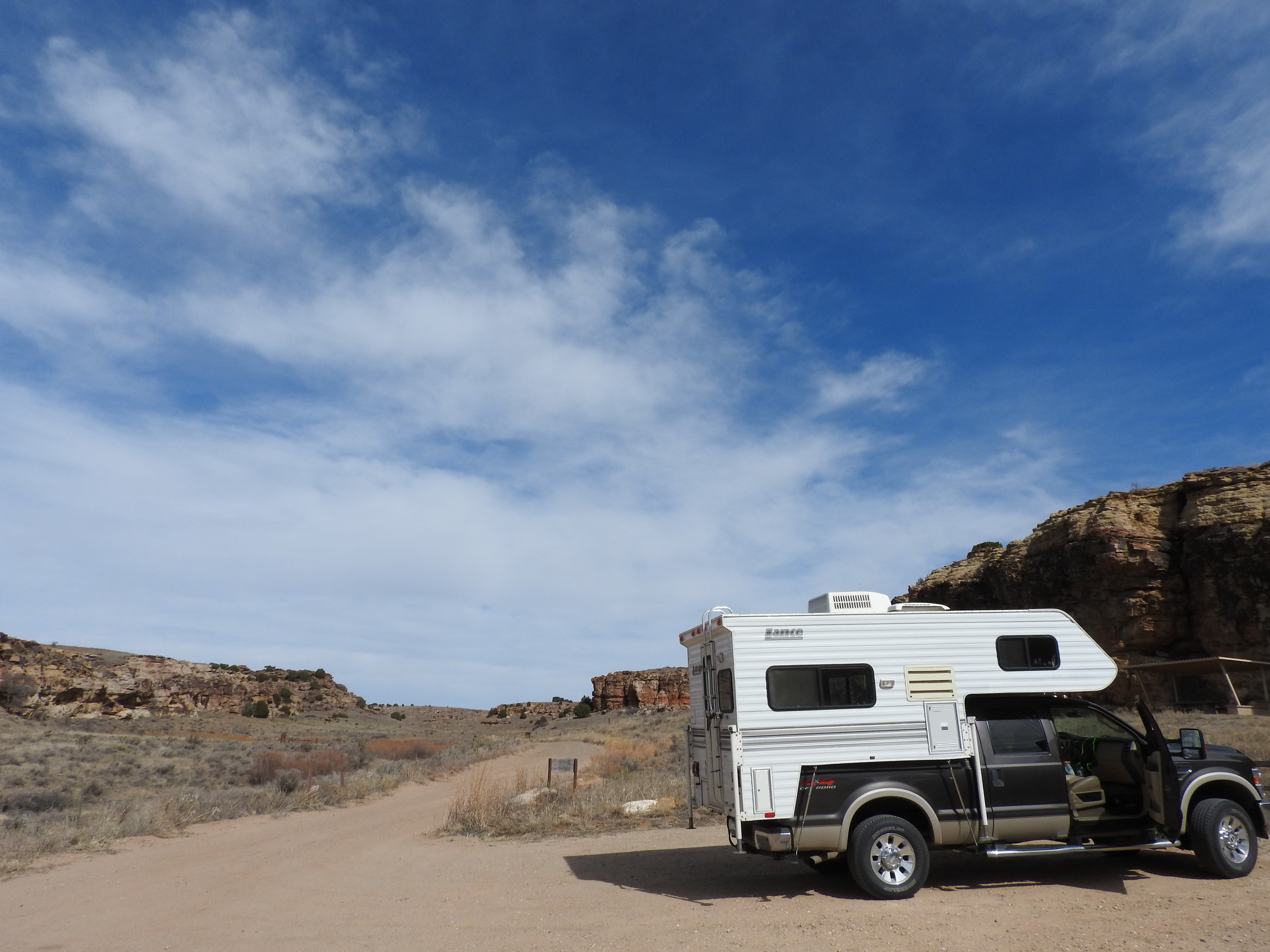 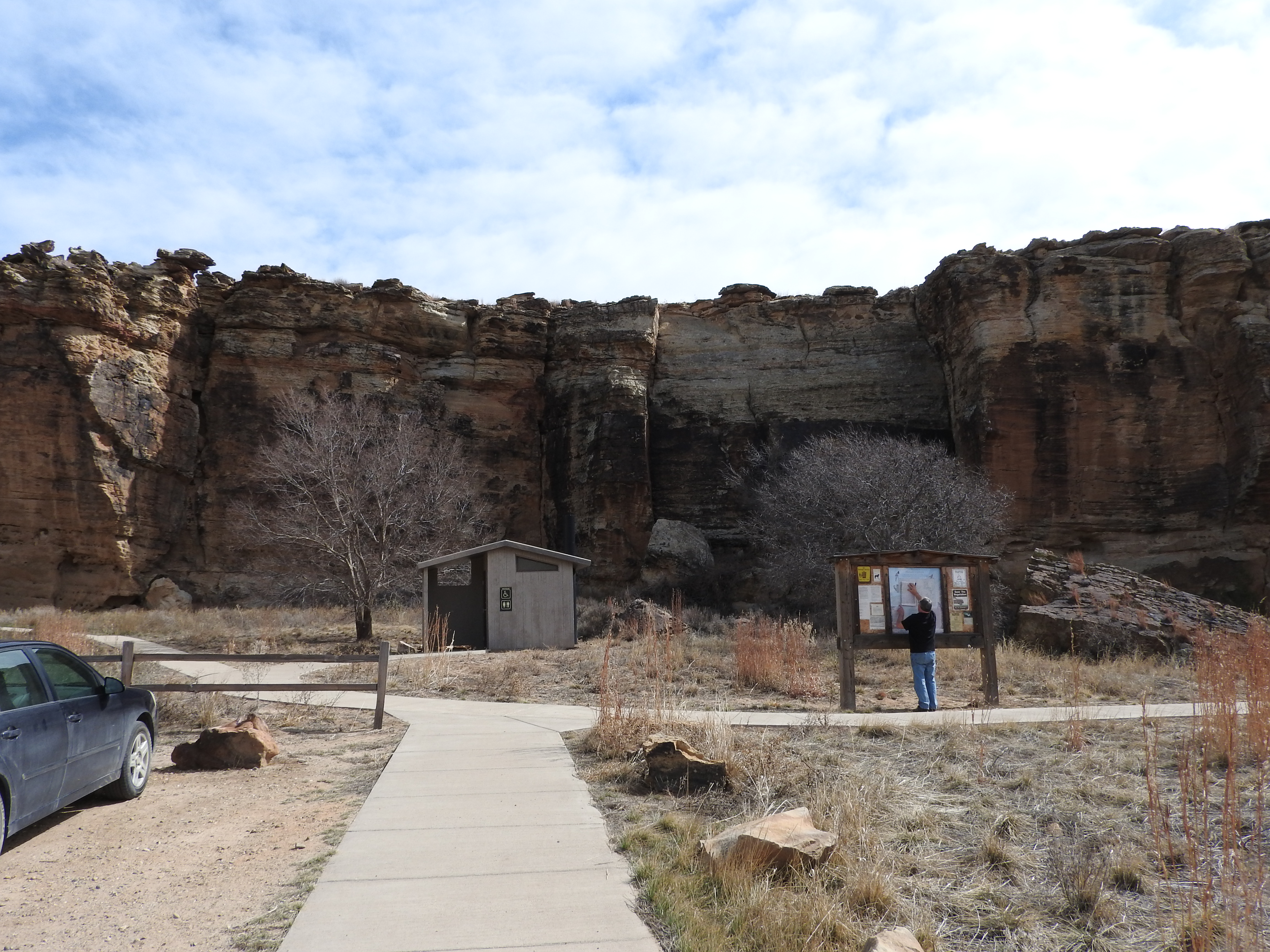 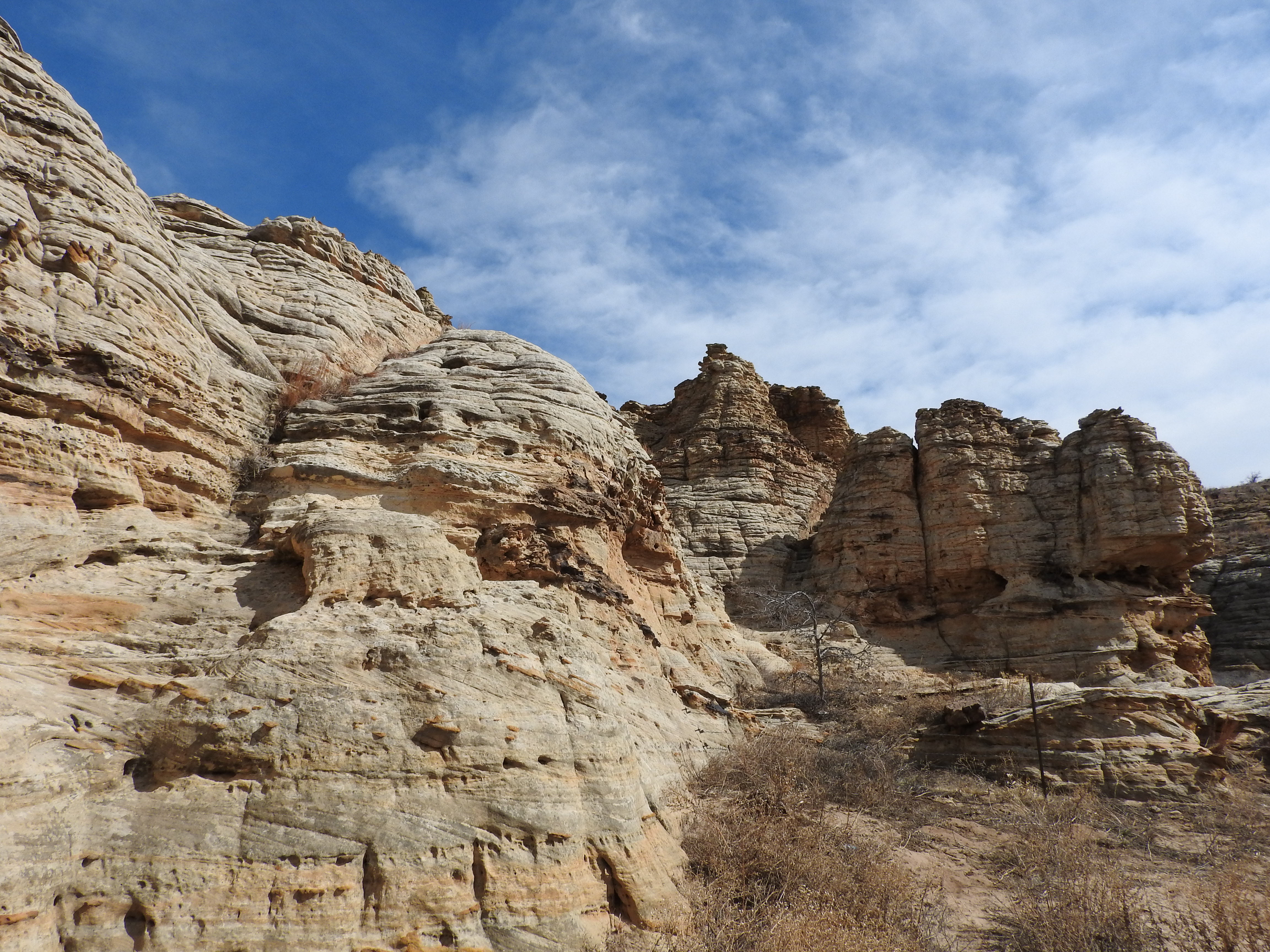 My dad and I spent most of our drive that day listening to High Plains NPR. Rumbling through this vast empty landscape with no connection to civilization but the radio was strangely relaxing. I felt like I was in some great American novel.
That evening we drove through Enid, Oklahoma, the center of the continental United States and stopped for the night in the next town.

March first was 80% Arkansas. After two days of  dead grass and shrubs I was excited to see the color green again. And trees! And hills! And streams! It was a gradual change, but a change nonetheless.. and it meant we were getting closer and closer to the Appalachians. That evening the sun set as we crossed the Mississippi in to Memphis, Tennessee. The roads were very busy and we vowed to just get simple fast food as close to the hotel as possible instead of seeking out some good Southern ribs.. but guess what? Right next to the hotel was a place named “Jim & Nick’s BBQ” and since there’s no kill like overkill I went full on Southern: peach tea, ribs, and banana pudding for dessert. It was glorious.

We had planned to arrive at Amicalola Falls the next day but decided to spend the night of March 2nd in Chattanooga. Why? Well, we thought we would hit the city about an hour before rush hour and promptly hit traffic.. because we had just crossed in to the next timezone. After about an hour of creeping along over the highway we were both tired and ready to call it a day. And so we did. In Chattanooga, we waited until the traffic died down and then went to the store for my very first trail supply!

The day after, we finally hit Georgia. We stopped in Chatham and Ellijay for groceries and to clean out the camper, then finally headed to Amicalola. What started out as rain while driving quickly turned to snow, and by the time we got to the visitors center everything was white. It was very beautiful, but obviously had not been anticipated by anyone at the park. There were a bunch of people waiting inside for permission to drive up to the campground, but the road was still being cleared. No one really seemed to mind, however. I was too excited to care – there we were, in the visitors center! The approach trail started right there! I still wasn’t sure if I was even going to do the approach trail but to have it so close that I could literally walk out and touch it was amazing to me. An abstract concept was turning very, very real.

Waiting for the road up to Amicalola Falls campground to open up again.

In fact, it was so real that there was an actual ATC ridgerunner standing right by the door, ready to register beginning thru-hikers. Though I wasn’t ready to register yet (I wasn’t leaving until after the AT Kick Off), I had a nice chat with the ridgerunner. Her name was Clarity, I learned, and she would be doing a talk during the Kick Off. She also ran a website, Appalachian Trail Clarity, which sounded oddly familiar to me. Sure enough, after a little further conversation I realized that I had read a couple of her articles during my preparation. This only made me more excited. I was meeting people! Really cool people who knew things and wrote stuff! She gave me her email address and told me to email whenever I felt down or needed advice. Later, at the Kick Off, we exchanged phone numbers and she was dubbed my Trail Fairy Godmother. Being able to text someone when I was in need of advice or just some cheering up has been invaluable to me so far, so thank you, Clarity!

After an hour or so the road up the mountain was clear and we were given permission to drive up. I talked to my mom on the phone and then my dad and I built a snowman. Because that’s what you do.

My dad said “this is excellent snowman snow.”