About five miles before Monson I was hiking with Honey Badger (maybe you’ve read her articles) and Hare when we passed a gaggle of giggling French-Canadian girls. I promptly discovered they weren’t giggling about us, but instead another strange man nearby. First, he was pantless. A long white t-shirt down to his thighs, I didn’t look too closely. Second, he was loitering in the middle of nowhere with only a canteen (and a shirt). Third, he looked like Stannis Baratheon post-lobotomy, answering my “how’s it going?” with a doughy stare. Honey Badger passed him ahead of us and rushed away so fast she broke a pole. I kept glancing behind me for the next couple miles. Let’s just say this man wins something.

A while later at the ME 15 crossing I stood at the entrance to the Hundred-Mile Wilderness and called up Shaw’s Hostel in Monson. Shaw’s has been around for almost forty years and is one of the best known hostels on the AT. It’s a sort of tradition to stay at either Shaw’s or the Lake Shore House as preparation for the Wilderness. Just in the past year Shaw’s actually changed ownership to a young couple who thru-hiked in 2008, Poet and Hippie Chick. Poet came by and gave us a ride back to the hostel. I could tell right away that Poet was a sharp, well-read guy, witty and irrepressibly cheerful. His other job is teaching high school English.

I purchased about six days of food from the store in Poet’s garage. That night Shaw’s was packed with a lively crowd. Even Obsolete, Caboose, and Mystyr Lynard were there. Of course I played a little harmonica again. When Honey Badger, Hare, and I got back on the trail the next morning another pair from Shaw’s got back on the trail too. And what a pair they were. 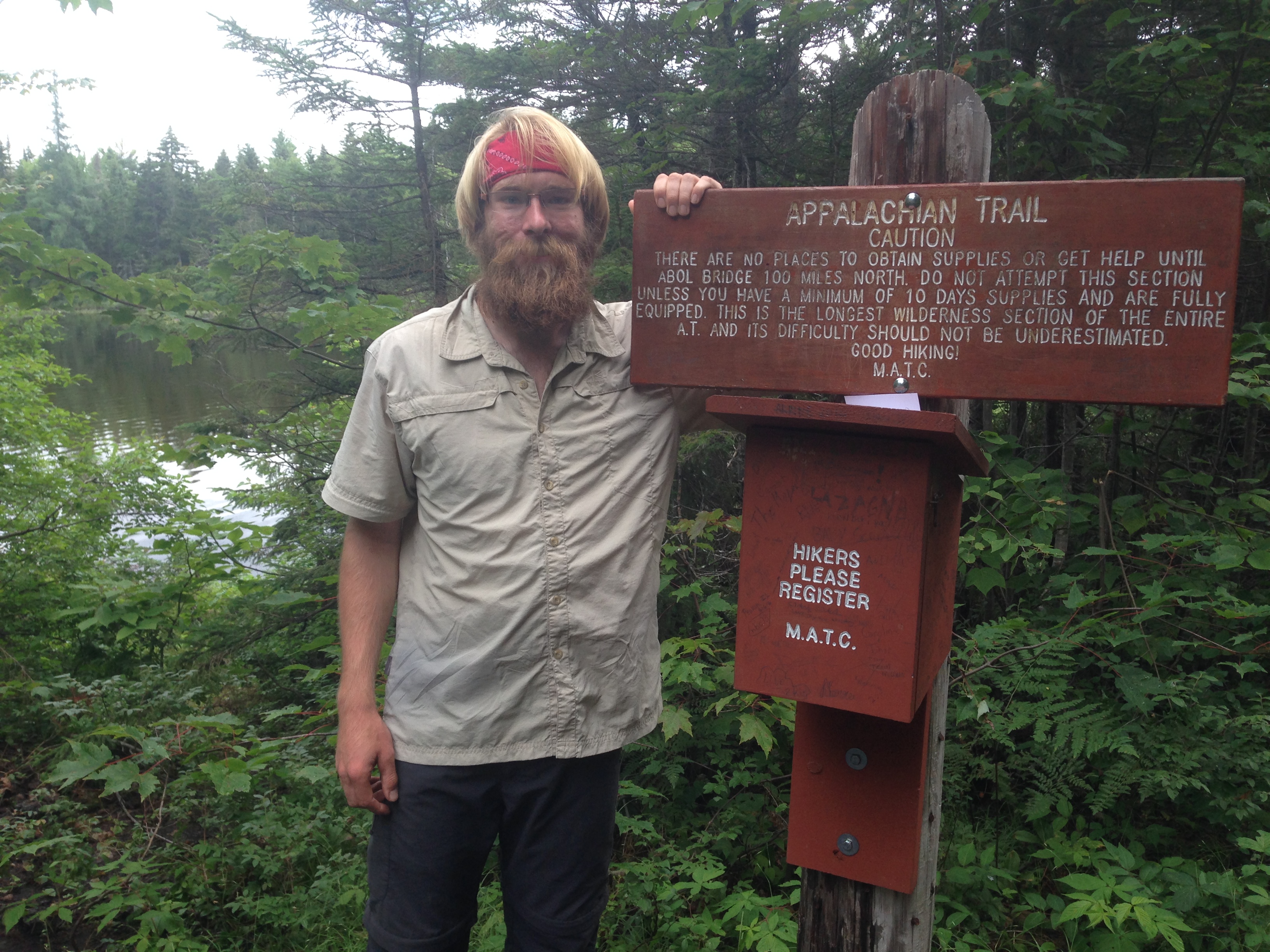 These two had been blasting out regular 20-40 mile days and were aiming to finish in a total of about 90 days. They were lean young guys and they had developed their own trail language. They jabbered back and forth in accents  that sounded part-newscaster, part-new-yorker, and part-baby-talk. Sometimes what they said sounded like utter gibberish. I still don’t know if it meant something more than gibberish to them. They liked the sound of themselves. In the typical routine one would describe something mundane in the mock-newscaster voice and then the other would yell “G’daaaaammmn” in a peculiar ace-ventura-off-the-deep-end kind of way. One became hesitant to say or do anything around these guys in fear of eliciting yet another “G’daaaammmn” and commentary.

“Hi there folks, we got some breakin news for ya: we have just been passed by another car. Reports are in that he was an asshole.”

It was a long car ride.

As I started into the Hundred-Mile Wilderness the pair immediately started wooping and running. They vanished into the woods, their yells and g’daaaammns echoing behind them. But for some reason, despite their apparent speed, for the next two hours I continued to hear them in the near distance. Every few minutes another faint g’daaaammn drifted from the wilderness and I could only chuckle.

“G’daaaaaaaammmmn!” They said when I caught them snacking at a shelter. “Beowulf is fast!”

About an hour later they passed me for good and I heard their last g’daaaammn disperse into the rugged foliage. But even months after the trail now that trademark yawp still sounds in my head. It’s an earworm. A curse. If only you could hear it.

The first two days of the Hundred-Mile Wilderness are hard work. The trail is rocky, rooty, muddy, flooded and trying with all its power to make you trip or slip. I slipped a number of times, but as usual I got away with scrapes and bruises. I can’t remember if I mentioned this before but massive backpacks are a real life-saver when you fall on your back!

Just before Chairback Gap Lean-to I saw a hiker coming down the hill in front of me. Approaching each other we stopped and smiled. I knew this person! After one of those terrible moments where someone else remembers your name immediately and you can’t recall their’s (ach! sorry!) I pieced together this was Elizabeth, a friend from Middlebury College who graduated a year before me. Elizabeth had hiked the AT before and I hadn’t even known it! I would have gone to her for advice. This time she was hiking for a month, just as a section.

Coincidences are wonderful. They provoke hunger for the impending moment, like carrots on a stick held by Time.

By the third day the Hundred-Mile Wilderness becomes a very different section of trail: long, scenic stretches of flat terrain weaving around beautiful lakes. The weather cleared up. It was smooth, fast hiking full of lots of reflection about the journey thus far. Twice I went swimming in a lake. The first time was at the lake below: 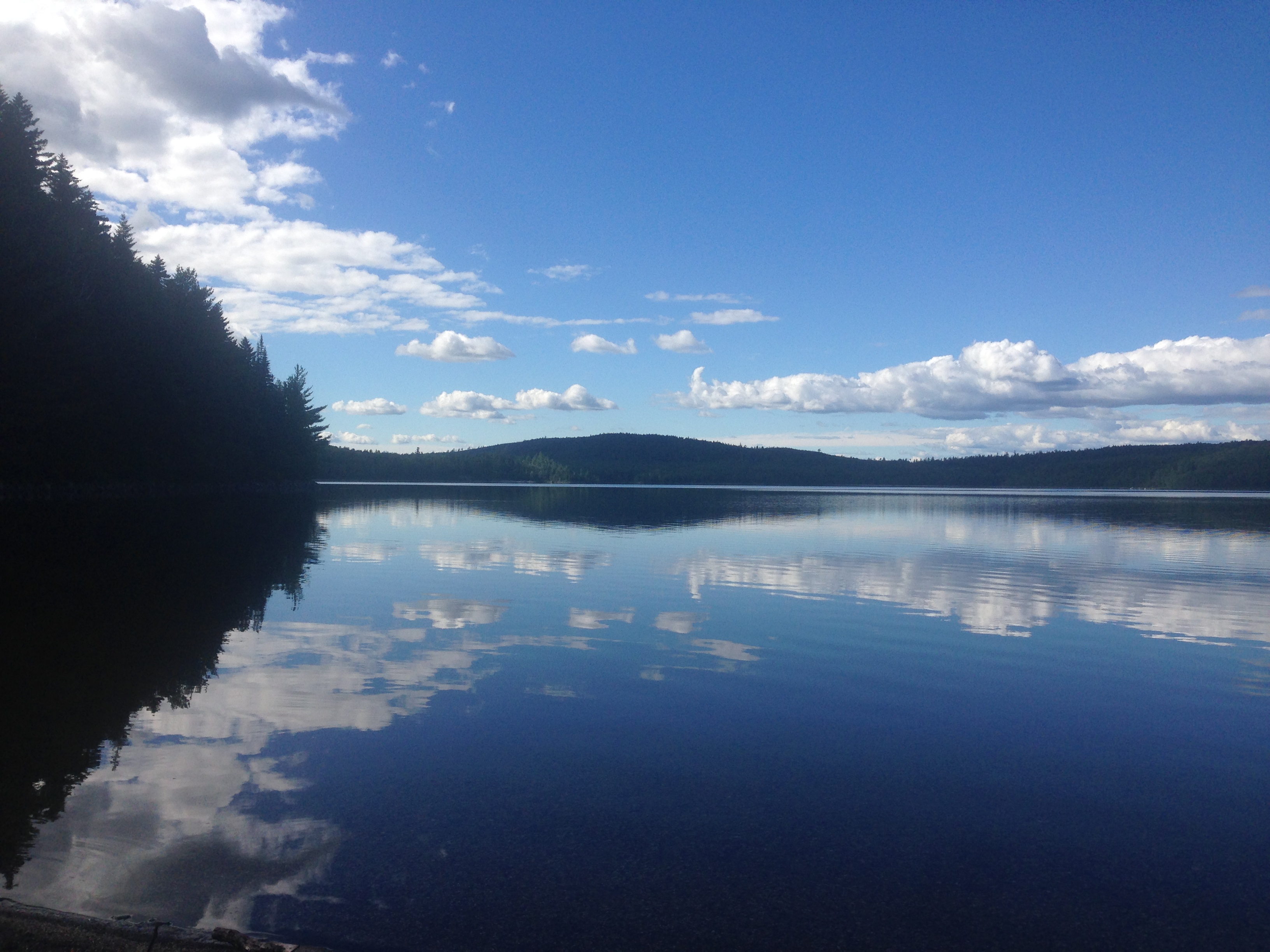 The second time was about a half-mile past where this moose was swimming: 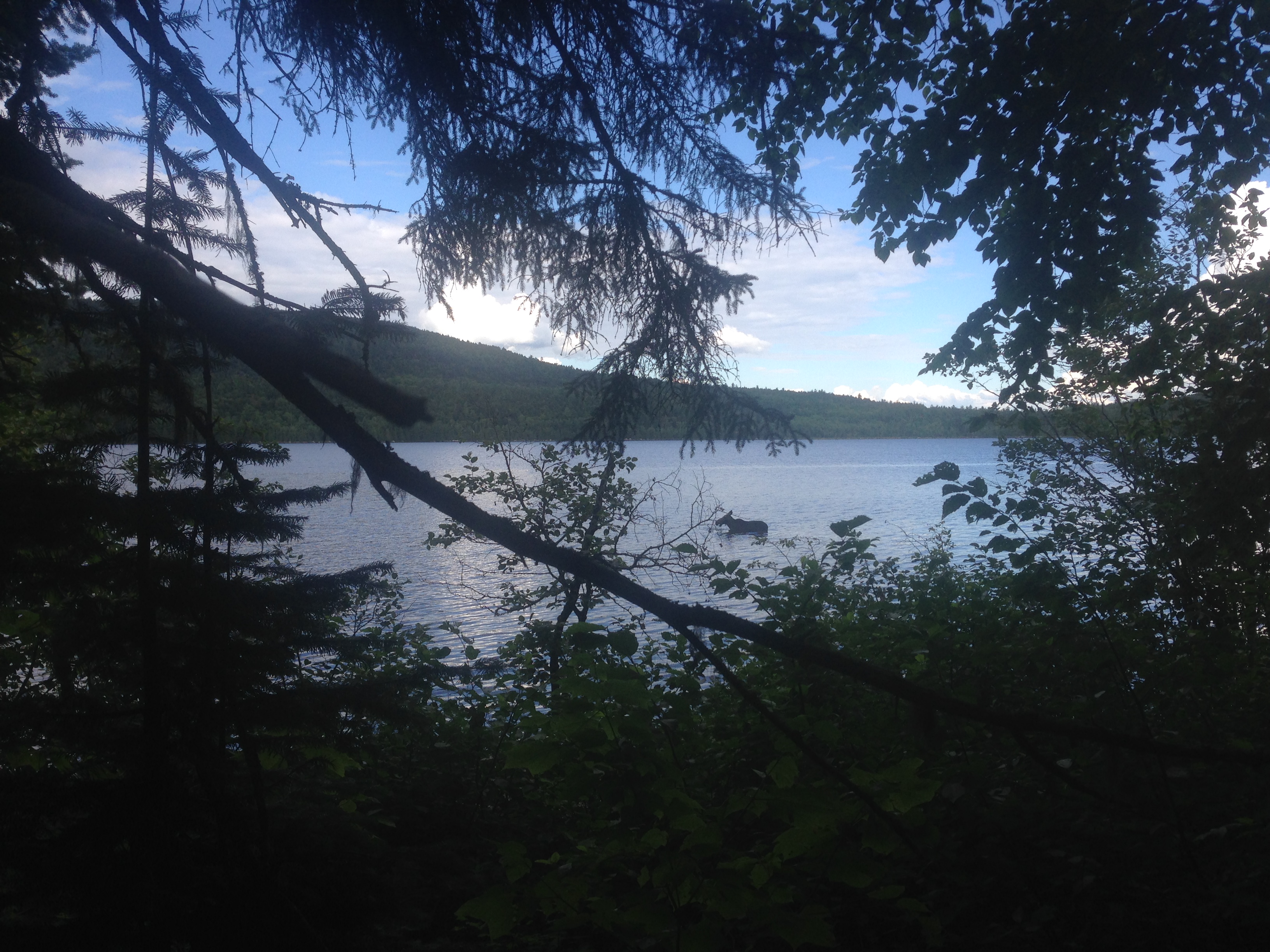 Earlier that same day I had stopped on the other side of this lake. When I approached the beech there I saw a small motor boat pulled up on shore with a big handsome dog. I almost jumped when a man and woman walked up behind me with another big dog and a chainsaw. After an awkward moment they told me that when I reached the sandy beech on the other side of the lake, find them and they would give me dinner. Did I trust them? Of course I did. When I got to the sandy beech I sat down in the sand. Hikers K2 and Breakless came by and we went for a swim, then they moved on. After a while I noticed some barking around a wooded peninsula. I explored a bit but couldn’t find a way to wherever the dogs were. Returning to my patch of sandy beech I recalled that I had mentioned to the couple that I played the harmonica. So I sat down and played a tune. And what do you know? I heard a motor start up and a boat swung around the peninsula. Ha!

I climbed in and motored off into the hands of more strangers. Turns out there were three of them: the couple and the woman’s father. They were wonderful. Her family had been maintaining this section of the trail for years and they were out doing some chainsaw work for a few days. This was their own favorite, slightly secret section of sandy beech. They fed me rice, chicken, beans, and brownies. I put up my tent on the secret beech that night, and the next morning I waded around the peninsula to return to the trail. These trail angels’ picture is at the top of the post. The view from their secret beech is below: 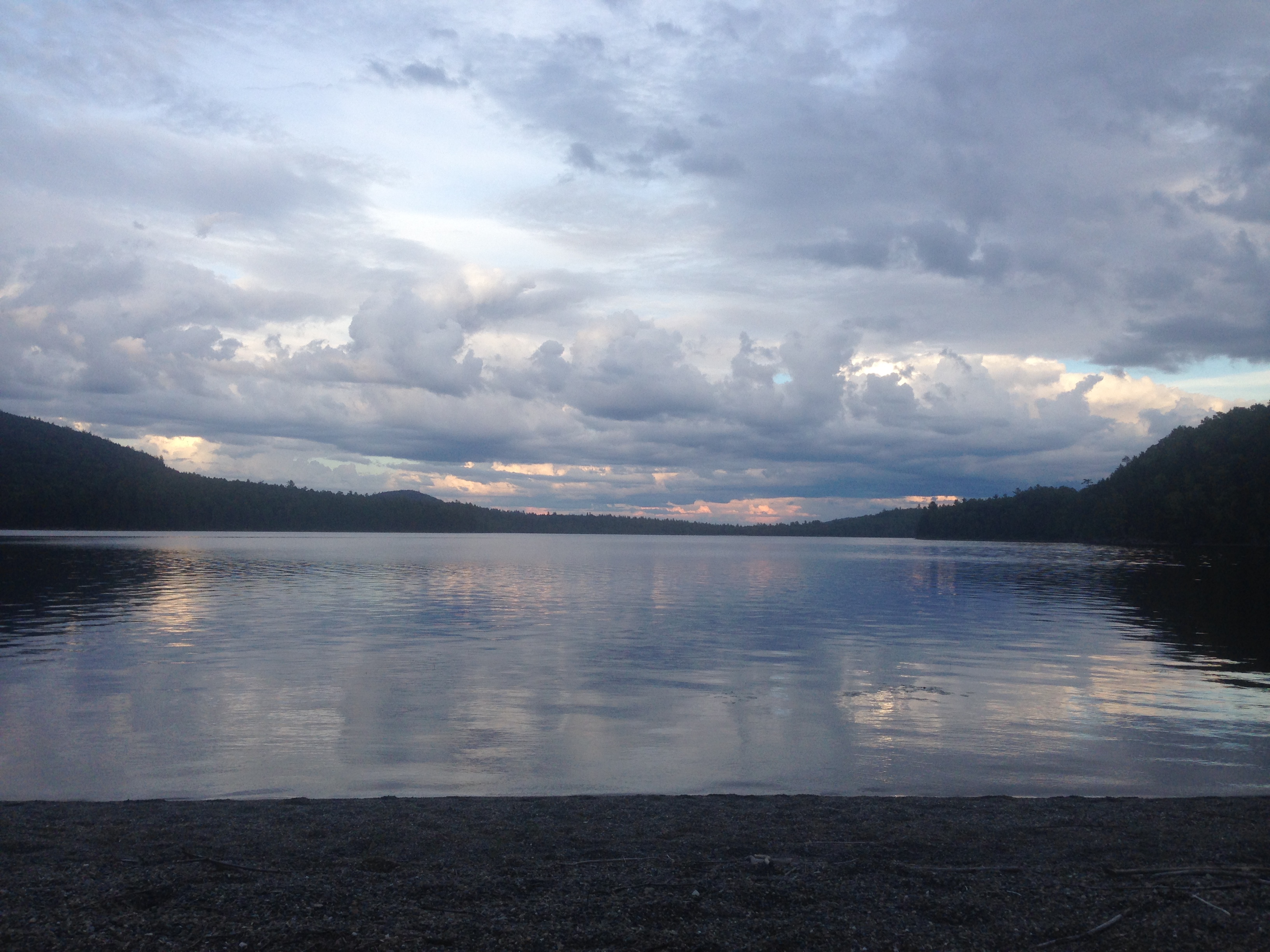 In the end the Hundred-Mile Wilderness was not difficult, not after five months of training. I brought five days of food and hiked it in five days, which is how many nobo hikers do it. Other hikers I knew like Honey Badger, Hare, Coyote, and Sunny hiked it faster than they had planned. The last three days in the Wilderness I hiked at the same pace as Breakless, K2, and Good People. We saw each other every day and stayed at a few of the same shelters. We would likely summit Katahdin together.

I’ll leave you with the view of Katahdin from White Cap Mountain. It’s quite a sight. From the top of White Cap I got the first cell reception I had or would have for several days, and I made a call to arrange my pick up after my summit. 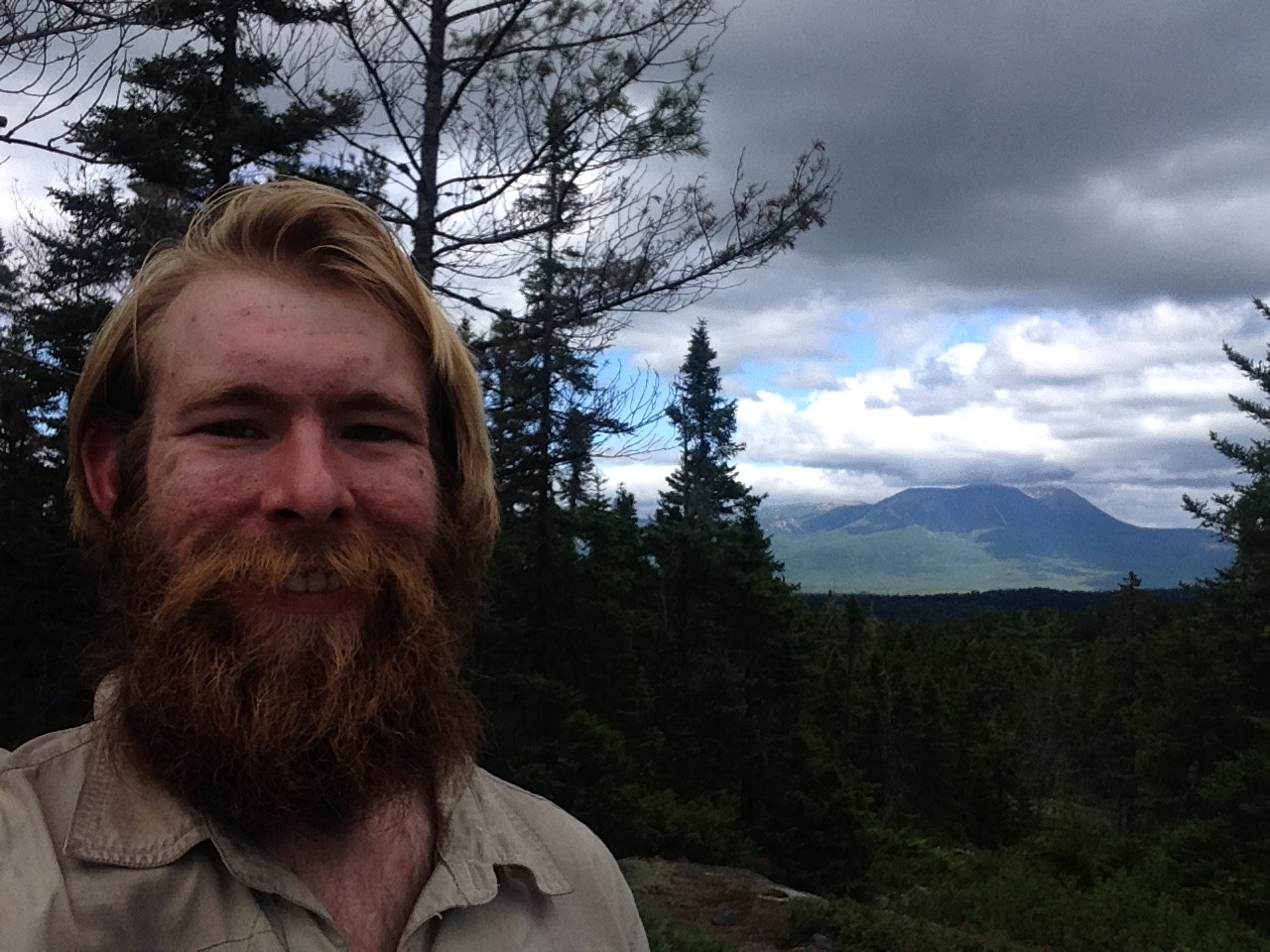