Monson: The Most Awesome Little Town in Maine

Warning, I don’t have a lot of experience with small towns in Maine or anywhere else. Plus I’m not sure if this is a review or a thank-you letter. It’s also not a review of one of the hostels in town, but a look at both and at the extraordinary people running them.

Ian and I will be leaving Monson tomorrow for a quick trip home, for us to re-supply, for me to go to my meeting in Philadelphia, and hopefully be back here by next Thursday ready to continue through Maine. It’s been three days since we popped out of the woods on Rte 15. Let us share our first experiences in a “trail town”.

We are staying at Lakeshore House, one of the two hostels listed in the AWOL guide. We had heard recommendations for both it and Shaw’s from other hikers. We debated which to choose. Here’s how we decided.

Cell reception is not great up here. Sitting at the trailhead Thursday evening, after several dropped calls, we defaulted to staying with whichever one we got through to first. Lakeshore won the Verizon Cellular lottery after several alternating dropped calls and aborted conversations (“can you hear me now?”)

I’m not sure what got through from us to Rebekah, the proprietor of Lakeshore, but the conversation on her side went something like this: “Your at the trailhead? Our first pickup of the season! I’m buying you a beer. Better yet I’ll bring the beer. What do you like? Never mind I’ll pick out a nice craft beer. Stay right there. Well be there in 10 minutes”. Click.

So Ian and I sat on a rock and took off our soaking wet boots and socks and put on our camp shoes. Sure enough, 10 minutes later we are in the back of a minivan, toasting each other with our beers and feeling tired, relaxed, safe, and just a little overwhelmed.

Rebekah picked us up with Riley, someone new to Lakeshore House this season, so she was simultaneously being hostess, tour guide, and teacher (to Riley) on the short ride into town. More words were spoken in those few minutes than Ian or I had heard or spoken in the past few days. We were processing very slowly. 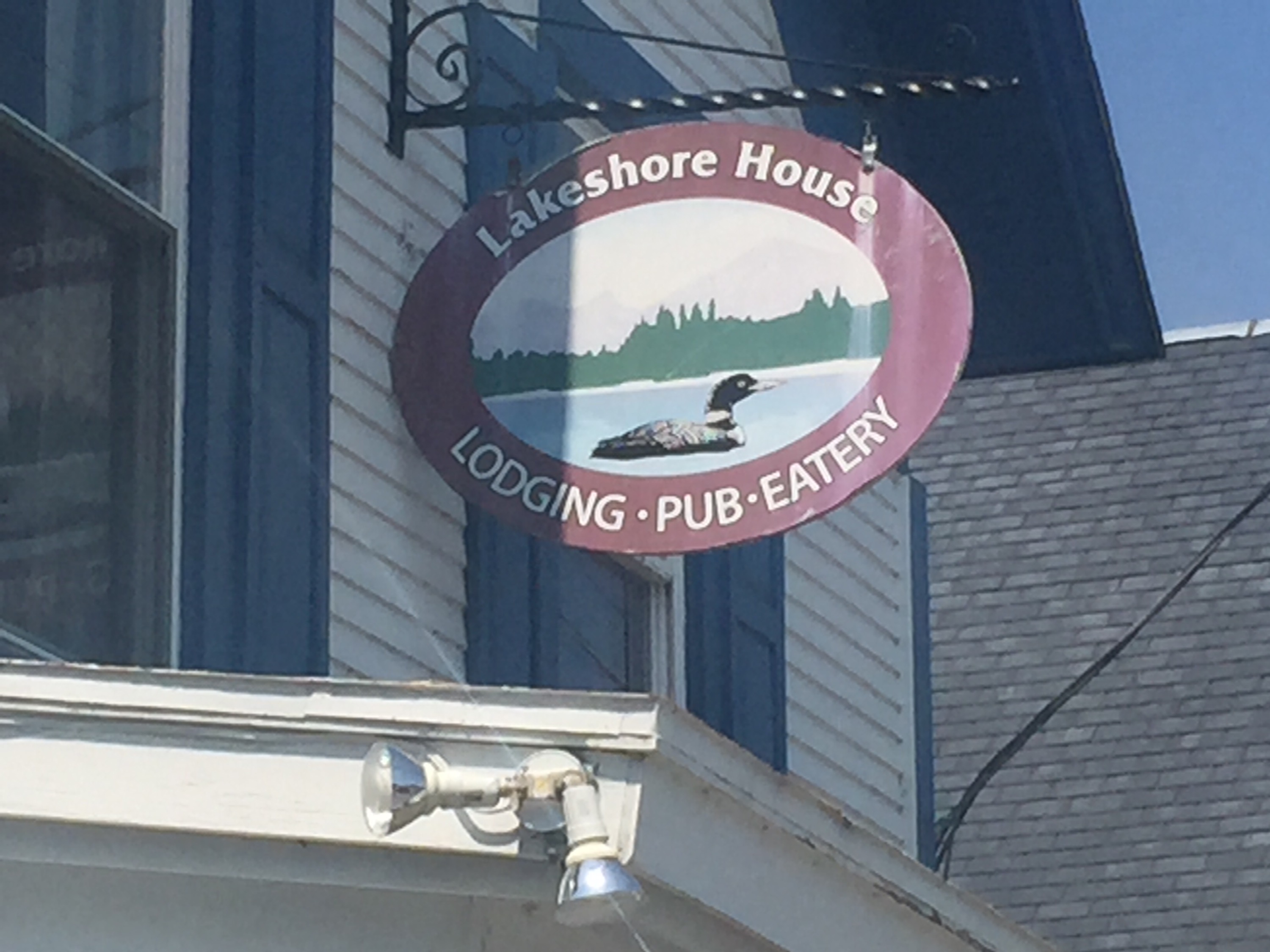 Winner of the “cellphone lottery”

After questioning us about our experience so far, Rebekah asked us what we needed right now. We thought we had an answer to that. Bed, shower, food. But we confused on the order. Rebekah helped make up our minds. She gave us a quick tour of the hostel, showed us the hiker clothes box where we could borrow clean clothes while we washed our two-week-muddy personal clothes, told us to take showers and that she would hold the kitchen open until we got down there. I asked her for some ibuprofen and an Ace bandage for my ankle. She said she would see what could do about the bandage, but that she would get me ibuprofen right away.

Now here’s where things got really interesting. After my shower, a guy shows up at the door of our room with some elbow braces. “Rebekah asked me for an Ace bandage, but this is all I had. Feel free to cut them up if that would be useful.” After a little conversation, we learn that this was Jarrod ( aka “The Poet” –  GA-ME 2008) the new proprietor of Shaw’s.

Think about that for a minute. If you asked the front desk at the Holiday Inn for something, would you expect it delivered by the manager of the Marriott across the street? There’s something unusual about Monson!

A half hour later Ian and I are downstairs where we again meet up with Rebekah and Jarrod.  I am in my somewhat clean camp clothes and Ian is sporting borrowed shorts and a nice powder blue sweat shirt with strawberries on the front. Jarrod and Rebekah joke about what our trail names should be. I get Gimpy, Tripod, and a few other references to my bad ankle. With a reference to his choice of a sweatshirt, Ian – much to his horror – gets Strawberry Shortcake. The only one that seems to have been repeated is Tripod – which Rebekah uses to refer to both of us as a group (only three good legs between us).

With an offer to do a pack shakedown for us Jarrod heads back to Shaw’s. We eat, we sleep, we do laundry.

The next morning we wander down the street for breakfast at Pete’s Place. When we walk in the door, one of the customers looks up and asks “Hey, are you the guy that needs the Ace bandage? Cause I think I can get you one.” After assuring him we had it covered, we ate a wonderful breakfast and marveled at this level of communication and helpfulness. We’d only been here for a little over 12 hours and everyone seemed to know who we were. 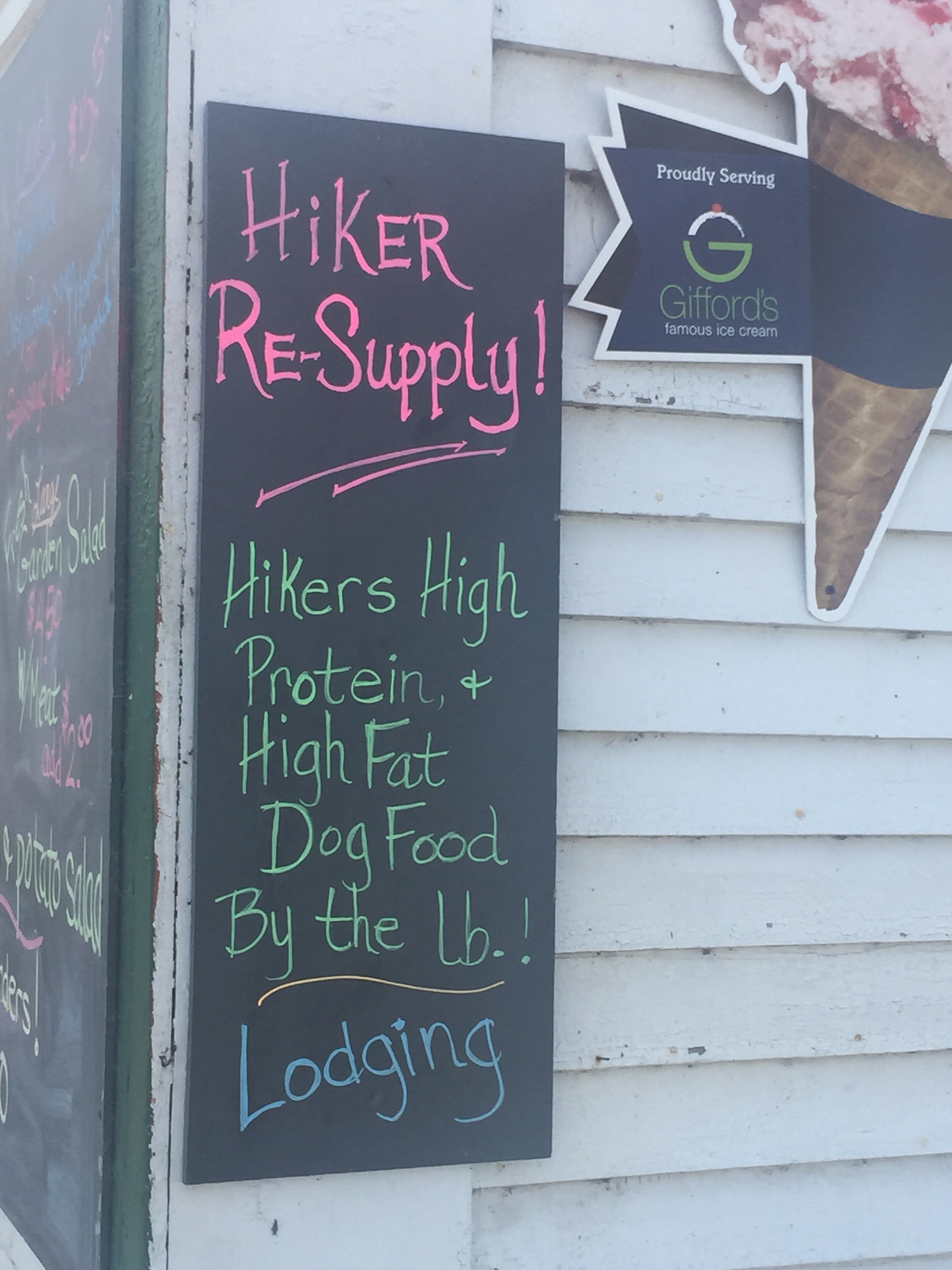 We then decided to wander over to Shaw’s for the pack shakedown. We thought that would take about an hour or so. On the way, some people we didn’t know stopped and told us they were on their way to Bangor and wondered if we needed anything. This is a level of helpfulness I have never seen before.

At Shaw’s Jarrod invited us in. Offered us soda and food and sat and talked with us for a while. It was over an hour before we even started the shakedown. We were at Shaw’s until about 6 PM – 9 hours! It wasn’t all pack shakedown – it was meeting people who were in and out. Sitting in Adirondack chairs and talking. A very pleasant day. Jarrod lightened each of our packs by a bit and we are now going to try an alcohol stove.

While at Shaw’s, two hikers from West Virginia that we had passed on our way to Wilson Valley were dropped off. They had run into trouble and a bad knee, and got picked up at Katahdin Ironworks Road and brought back to Shaw’s. They said it took over 2 hours to get back, which meant that the guy who picked them up drove over 4 hours to do it.

We were surprised to learn that one of them had the trail name Noseflute. Ian’s older brother, Mark, had met Noseflute – who had gotten that trail name by handing out and teaching people to play the noseflute – at the Tom Leonard shelter on the AT in Massachusetts back at the very beginning of May. For a college graduation gift, Mark had given Ian a bag of noseflutes with instructions to look for and give them to Noseflute if we passed him. We did not have high expectations for success of this mission. When we had passed these two distinguished older gentlemen on the trail, it never occurred to us that one of them could be Noseflute himself. Now he was standing in front of us.

So later that evening we gathered at Lakeshore House for dinner, made the transfer, and got lessons on how to play such classics as Dylan’s “Blowing In Your Nose” and Tom Jones’ “It’s Snot Unusual”.

Upon hearing this story of Serendipity, Rebekah’s response was “Oh, that kind of stuff happens all the time.”

We also met Teresa, a woman from Alabama who had started SOBO, and ran into some issues from work. She is flying home today and will the restart NOBO. We friended in Facebook and will look to pass her sometime later this summer. The three of us compared notes on how different things were here in Monson.

In summary, it has been a wonderful and fulfilling couple of days. I can wholeheartedly recommend spending some time in Monson. I can’t recommend Lakeshore House or Shaw’s because I’d have to recommend them both. They are both wonderful places run by talented, dedicated, caring individuals.

I’ll grant that this is earlier in the season. I suspect that as the traffic grows, it would be easier to slip in and out of town and not get enveloped in the feeling of community and hospitality –  if you worked at it. But if you do that, it will be your loss. So if you can, spend some time in Monson and be open to all it has to offer.

I think all I can say at this point is Thank you. To Rebekah, Jarrod, and the people of Monson. Thank you for welcoming us, caring for us, and enriching our lives.