Around 11pm, I woke up to the steadily increasing pitter patter of rain on the trees. We hadn’t put up our tarps since the chance of rain was almost none. I was groggy, and initially tried grabbing my stuff to go to the shelter, but realized it would be easier to put up my tarp. I didn’t stake it down, and just tied it to the trees and draped it over my hammock.

In the morning, we ate breakfast in the shelter with an Australian couple doing a flip flop. We got on the trail. The cooler weather was a nice change from the 90 degree days. There were tons of chipmunks out, and we passed a lake and saw a big garter snake. 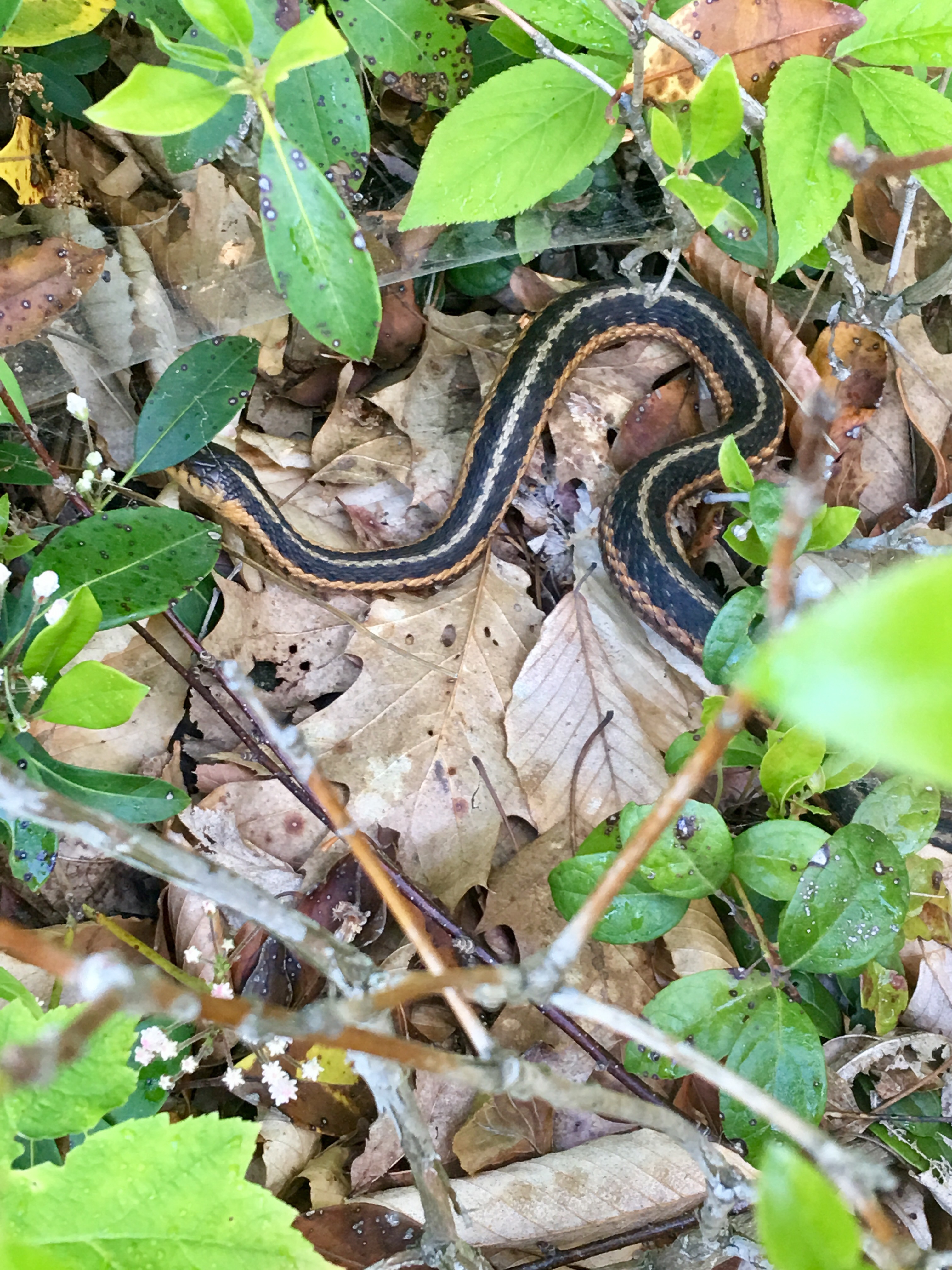 We took the day slowly. The past few days with the heat and the climbs have taken a toll on me, and my knees were hurting. I hung back behind Rash and Piñata, going at my own speed. I met back up with them and we crossed a large muddy area with planks. The planks had a 15 foot gap with no other way to cross except through the ankle deep mud. 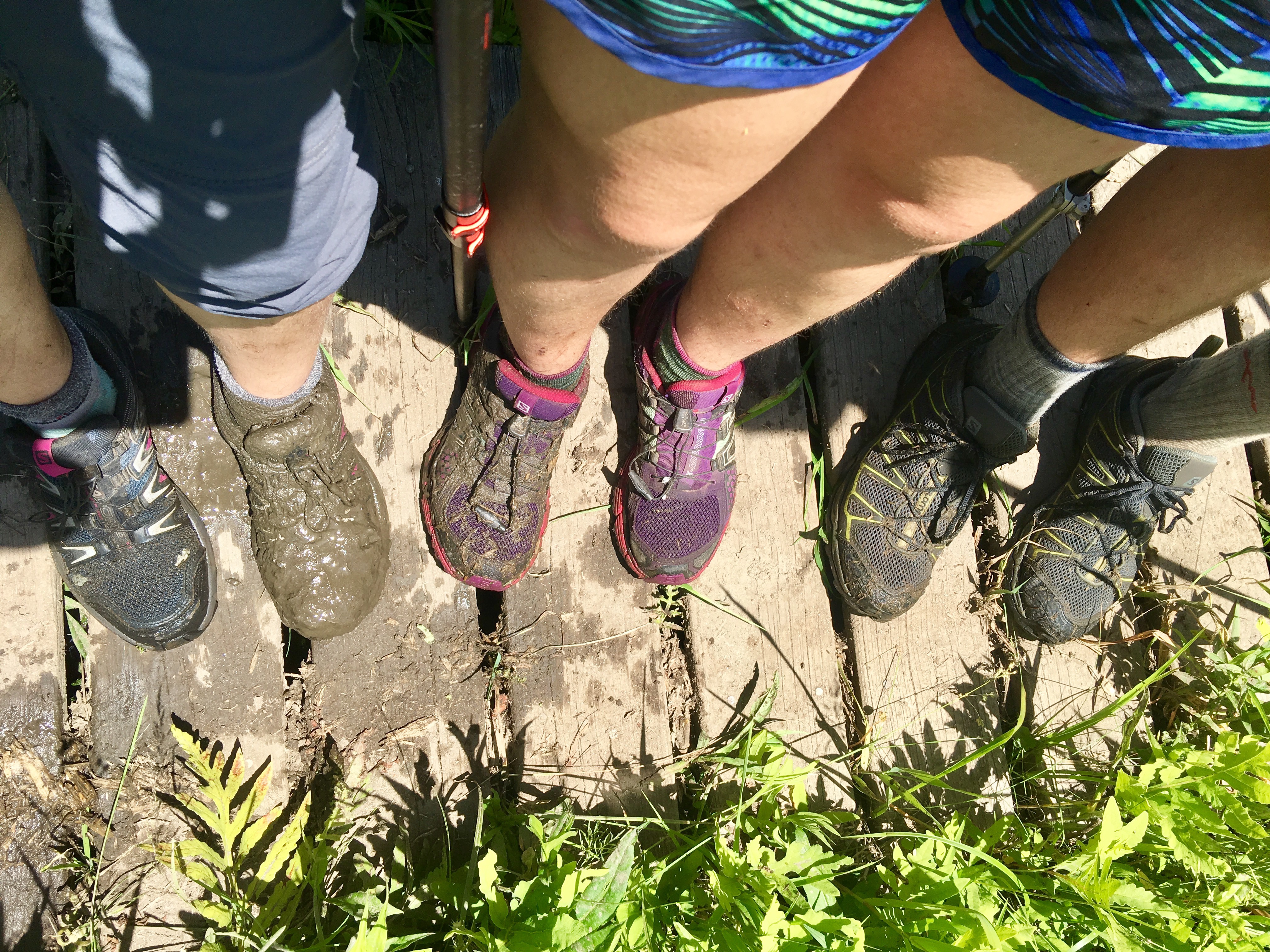 We went back into the woods. I met a hiker named Cowg (pronounced Cog), who was wearing the same blue shirt as Rash and had the same black multipack as Rash. I talked to Andrea on the phone as a did the big climb of the day. I met Rash and Piñata at a dirt road, and we decided to go to a hotel 0.1 miles off trail to relax and charge our phones. I’m afraid of getting injured this close to the end and could use the rest.

We powered through the 7 remaining miles and got to the hotel. The Australian couple were there. The hotel was on a beautiful lake and the room and small, but clean and quaint. We ordered food from an Italian restaurant. Rash and I split a Hawaiian pizza and I got calamari. We fell asleep watching Bob’s Burgers.

We had decided yesterday to sleep in, so we were in no hurry to get up. Lounging around felt amazing. I took a luxurious hot bath in the morning which helped with my sore muscles. We watched That 70’s Show until checkout at 11.

I lagged behind Rash and Piñata to hike at a slower pace to not aggravate my knee which was hurting yesterday. Nevertheless, my knee started hurting almost immediately, so I took frequent breaks and took it slow. Sweet Spot passed me on a break. She had a brace on her ankle from rolling it earlier.

I got to the October Mountain shelter for lunch and found some sectioners hanging out. A particularly bold chipmunk was coming up to the picnic table to beg for food. I talked to the sectioners about the Whites before heading out. 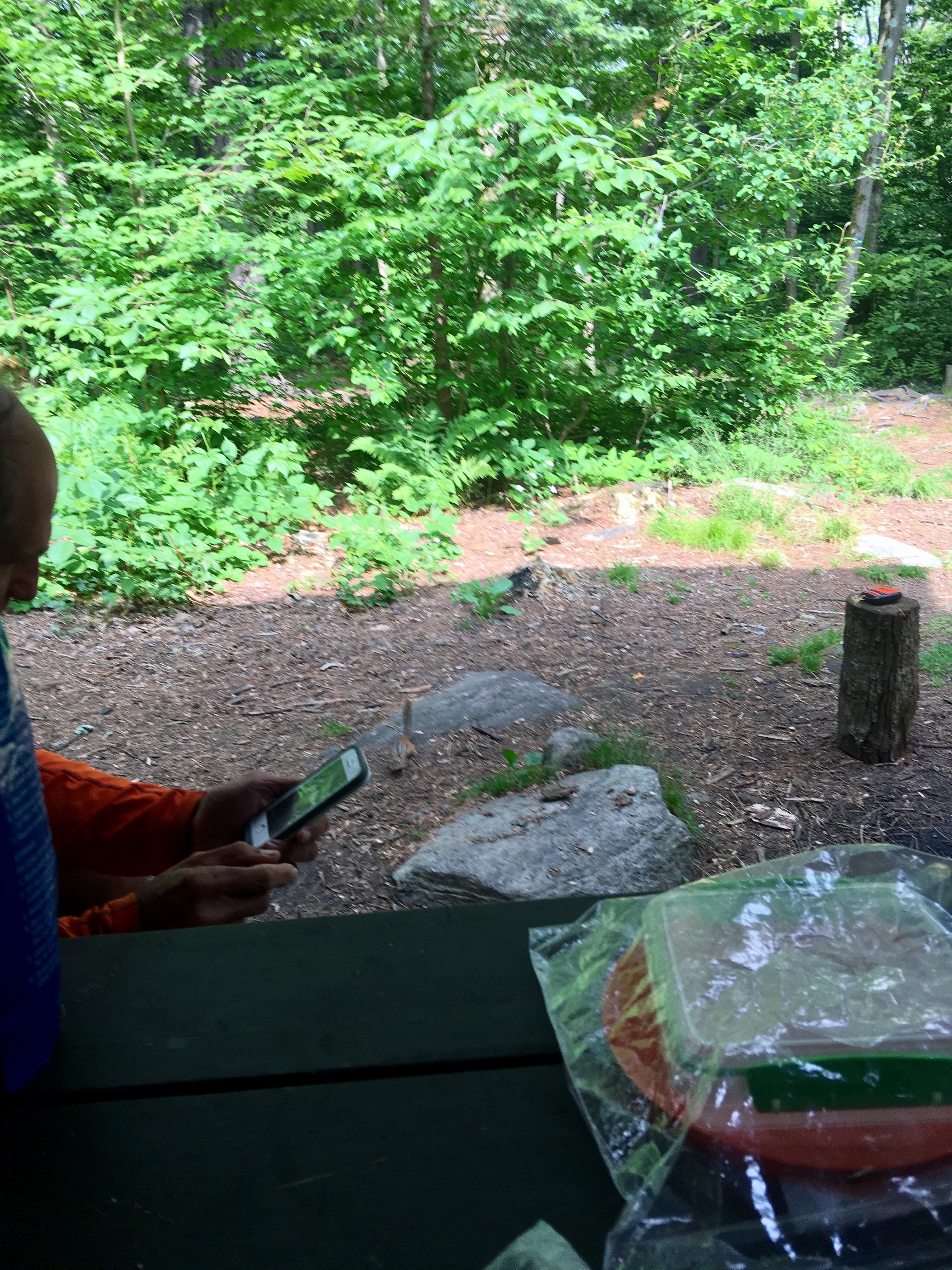 Bold chipmunk on the rock

I stopped at the cookie lady’s house where I found 5 pitched tents and a picnic table full of hikers. There were no cookies, but I refilled my water and moved on. I was hiking fast to get to the shelter before dark. I was less than a half mile from the shelter when I saw a large tan animal walking through the brush. I thought it was a deer, but it was walking strange, and deer usually spot hikers and scamper off. As the animal walked towards me, I saw it was a coyote. It was huge, larger than a big dog, and jt apparently didn’t see me. When it was 20 feet away, I smacked my poles together loudly, and it jumped back and scampered off. It was a terrifying experience, and left my heart racing. 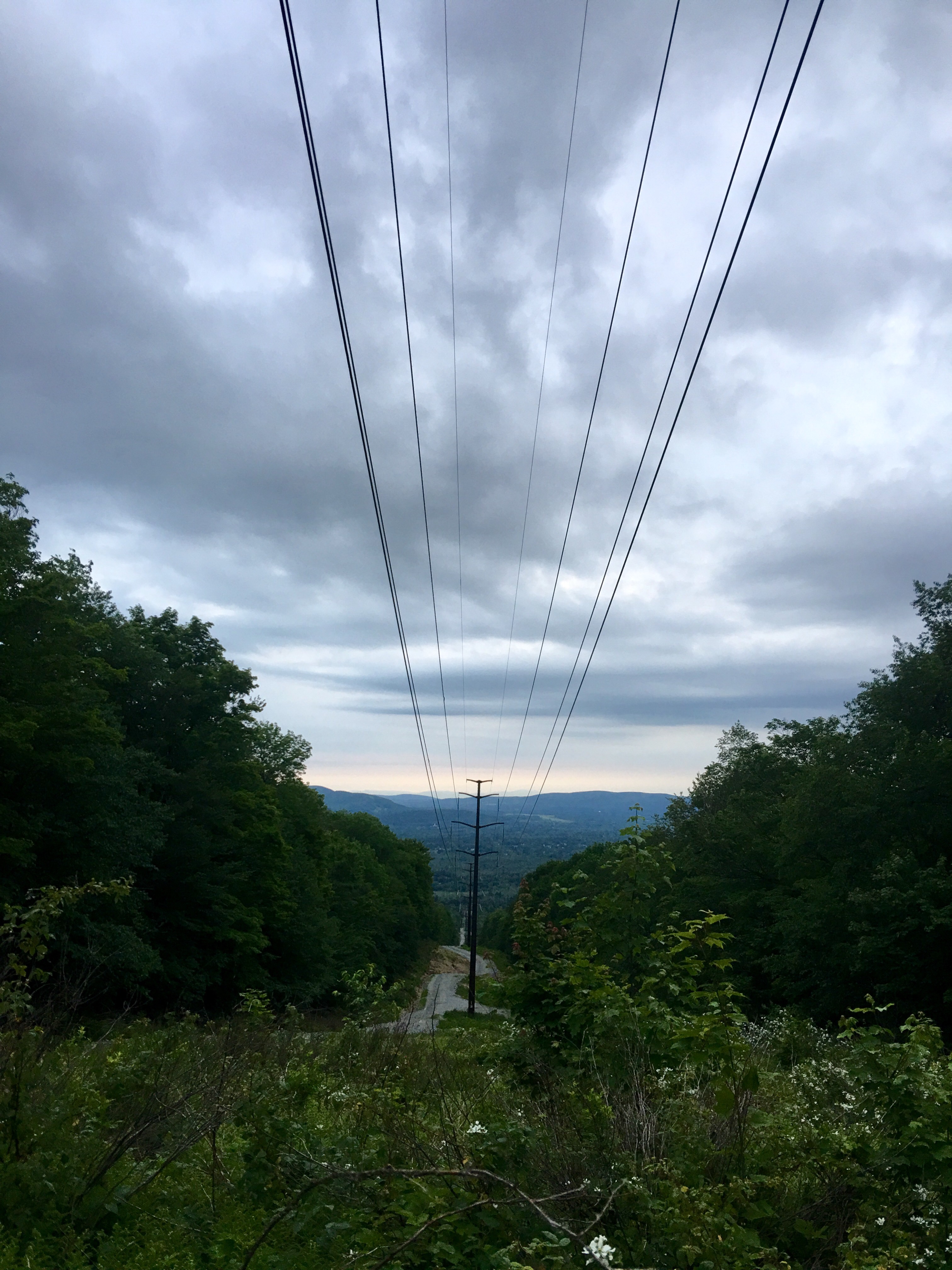 The power lines right after the coyote sighting

I ran the 0.3 miles to the shelter. I was terrified because it was getting dark and the coyote might have friends. I found Rash and Piñata at the shelter. I set up my hammock and told them all about my coyote sighting.

It rained lightly overnight, and my tarp was pitched close to my hammock, so when I rolled over, I would feel the wet underside of the tarp. The early shelter risers woke me up before 6am and I went back to sleep until around 7. We got on the trail and into Dalton by mid morning. 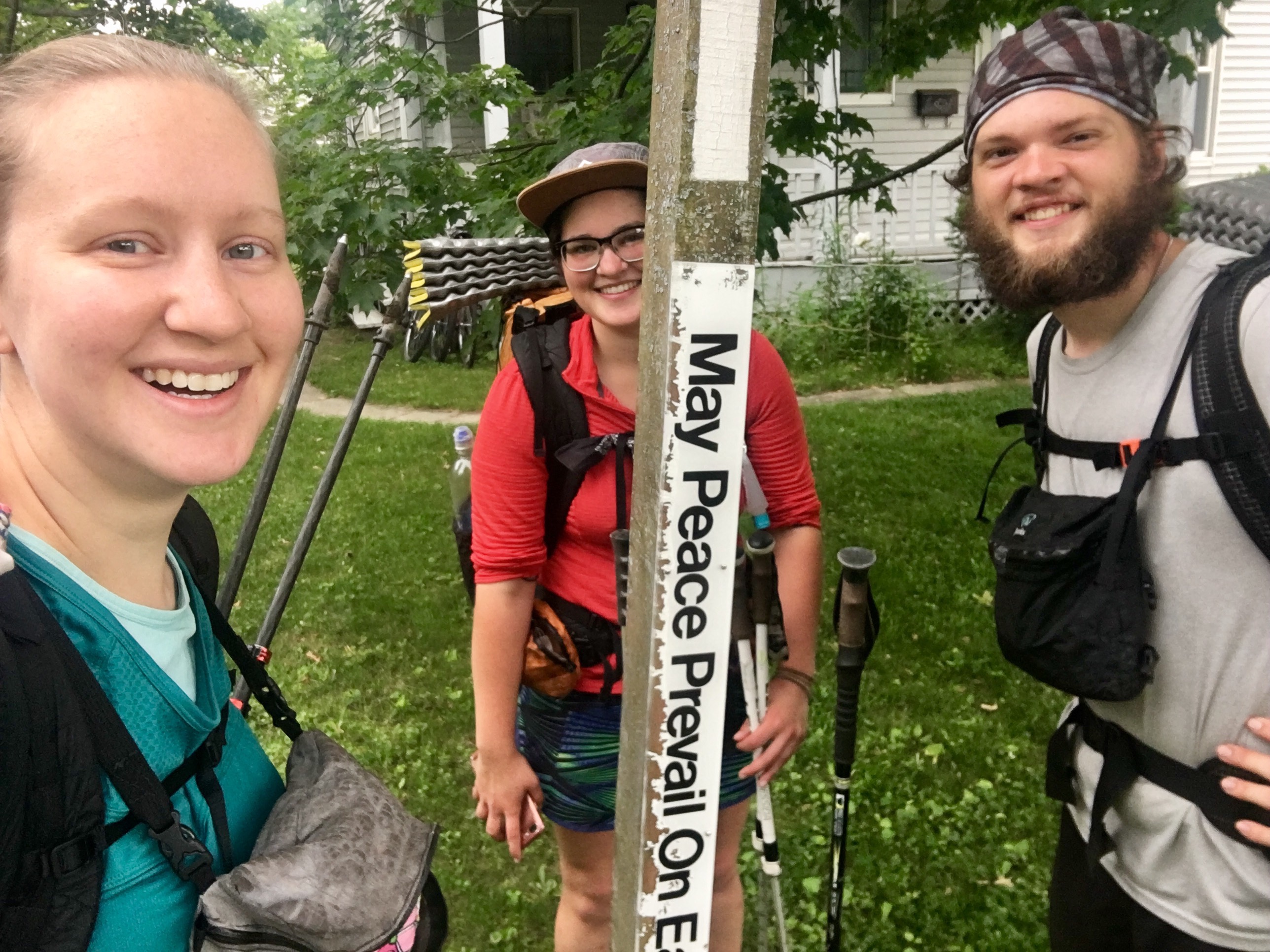 The first gas station we came to had nothing but snacks, so we walked a little off trail to get to the Cumberland gas station, which was more like a Wawa. We ate our lunches sitting outside while I let my phone charge. I thought we’d get more weird looks, but I think the locals were used to hikers. It started to lightly rain just as we were leaving.

I hung back behind Rash and Piñata and took the trail at my own pace. My knees weren’t hurting today and I wanted to keep it that way. The terrain wasn’t bad, and the day passed quickly. I talked to my mom and my sister on the phone which helped pass the time. The climb to Mt Greylock wasn’t as bad as the map made it seem. Even though there was an abidance of mud on the trail, my feet stayed dry until a mile before the shelter, when I stepped on a plank and muddy water gushed up and into my shoe.

I didn’t stop for lunch today, and on the last climb before the shelter I was feeling it. I tried making it to the shelter to eat dinner, but stopped quickly for a snack. I ate some of my squished chocolate doughnuts that I put in a zip lock baggie, and that got me up the last climb. At the shelter, I found Mulga and TBA (the Australian couple from a few nights ago), and I met Berks who worked as a PA at the hospital down the road from where I worked. It’s a small world when 6 states away and in the woods you find someone who lives in the next town over.