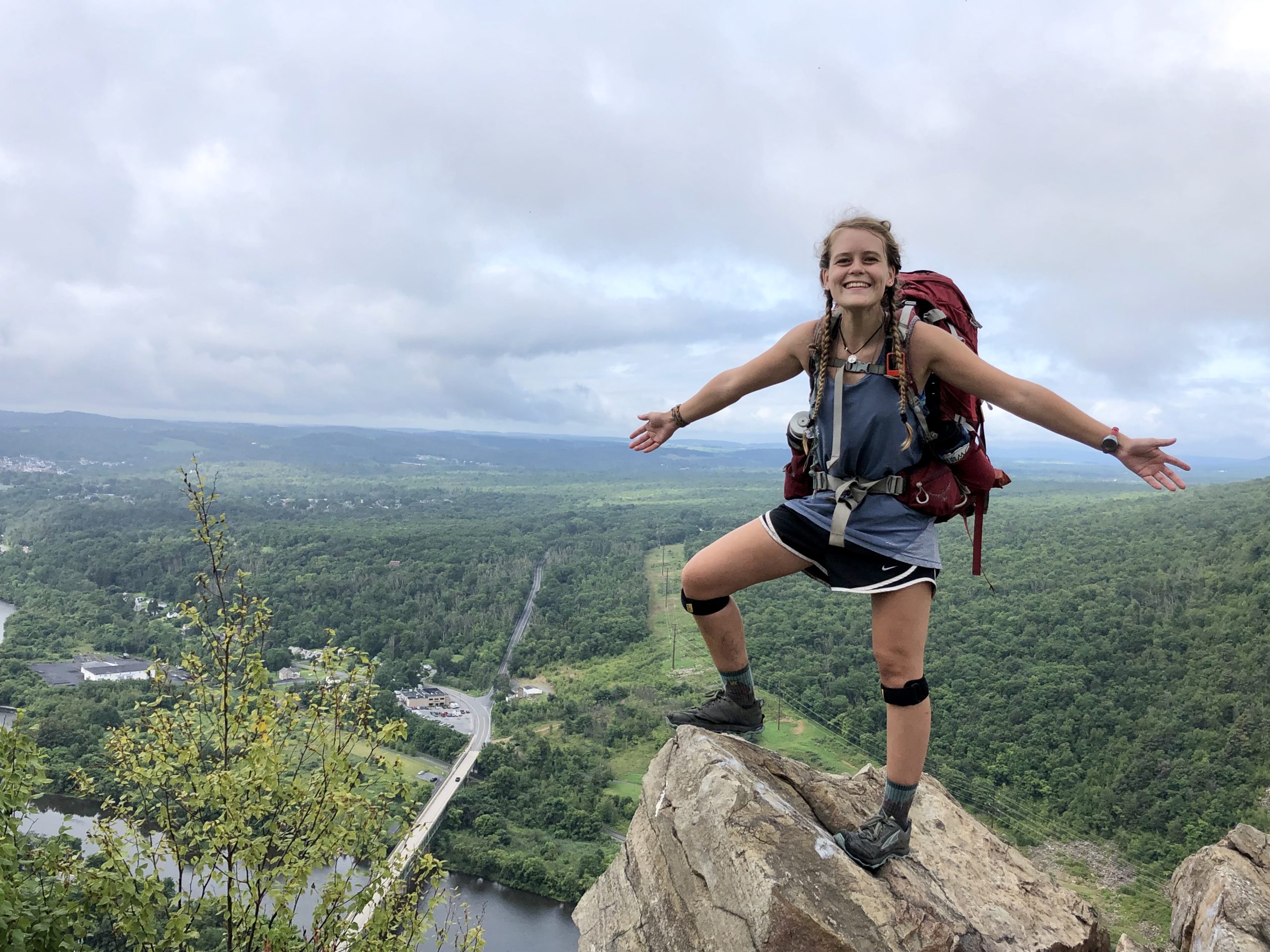 Pennsylvania north of Duncannon was the mentally most challenging section of trail for me. You might’ve heard about Pennsylvania’s affinity for rocks, which is no joke, but they’re not what was worst for me. I got back on trail hundreds of miles behind everyone I know, who were all hitting a new state every week while I continued to trudge through PA. A state with no incredible views, tons of rocks, and that’s it (southern PA with all it’s farm fields was beautiful, I’m speaking strictly about the northern half). The forest itself wasn’t even that beautiful. So mentally, I really struggled in PA.

Northern Pennsylvania’s one redeeming quality is the climb out of Lehigh Gap. Which is a literal climb. Over 1000 feet of elevation gain in 1 mile, with sections where you have to use your hands to climb vertical rock if you are any shorter than a giant. And I absolutely loved it.

I’m a rock climber, so I definitely was in my element on this section. There is a blue-blaze trail you can use to skirt around it in the case of bad weather or lack of desire to climb. Not an easy section with a pack, but I really really enjoyed it. Favorite part of all of Pennsylvania.

Church of the Mountain

Highly recommend staying here for anyone passing through Delaware Water Gap. Church of the Mountain has their basement set up as a living room and bunk room for hikers to stay at, donations encouraged (so technically free, but come on, donate at least a few dollars). It’s in walking distance to a couple places to eat, two gas stations for resupply, and there’s numbers for people who could drive you to Walmart (I just went to the gas station). Only buckets and soap for laundry, but the shower is INCREDIBLE. Gets so hot, and the pressure is the best I’ve had on trail, second only to that at Chica and Sunset’s Hostel in Franklin, NC. Some say the basement is a little stinky due to all us hikers, but honestly the smell kinda made me nostalgic—smelled like the cabins at the camp I grew up going to around the middle of the week.

The other wonderful thing about Delaware Water Gap: Pennsylvania ends right after it! Hello New Jersey! 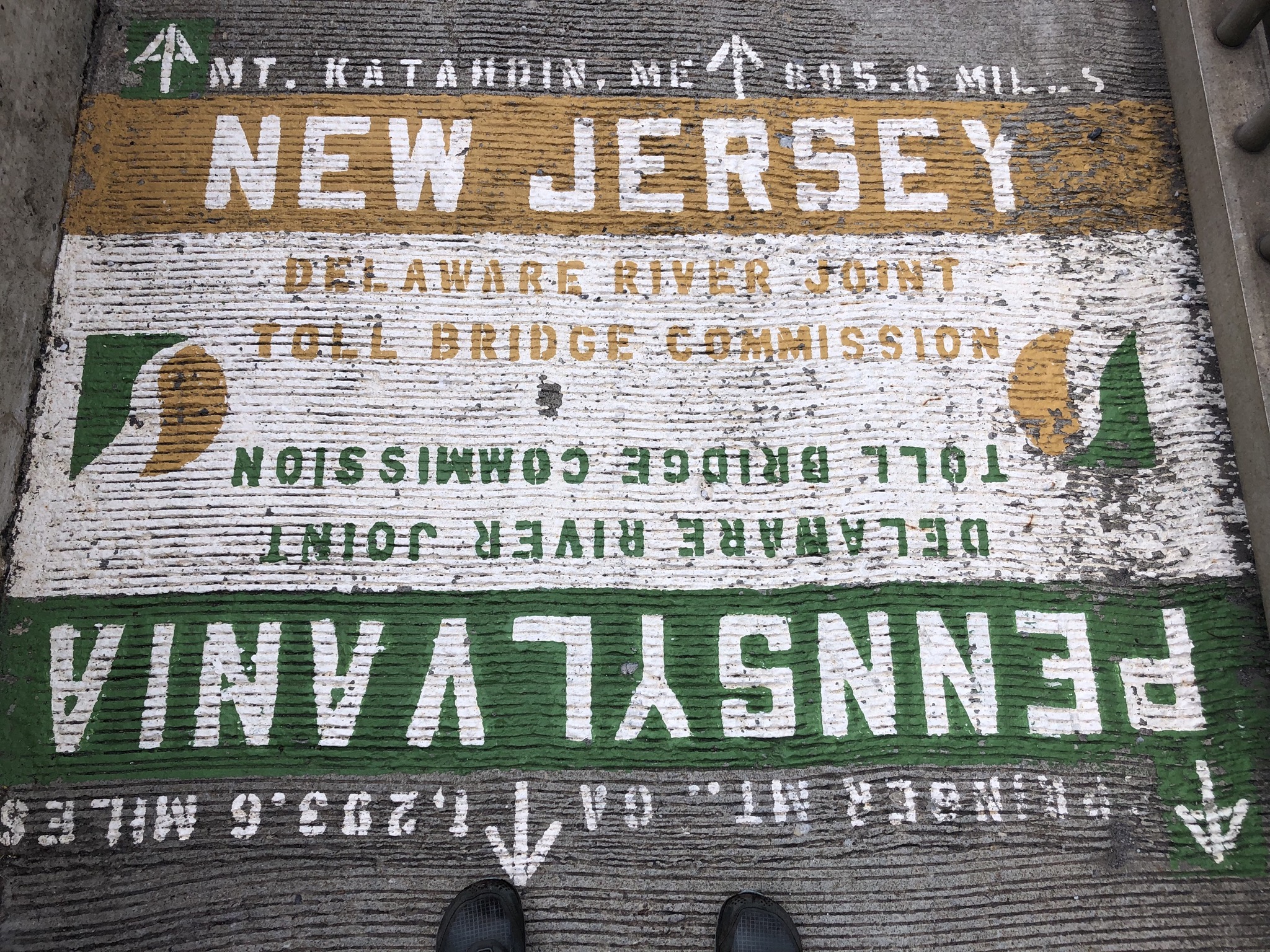 Pennsylvania’s rocks absolutely wrecked my shoes, so I ordered new ones to the Mohican Outdoor Center where I ended up spending a night. Campsites are $10 for thru-hikers, and they’re decent sized, so I split one with another hiker.

A group of us hung out in the dining room that evening, sitting on comfy couches and watching a movie on the projector. The guy that worked there was super great, he gave us Scooby Snacks and popcorn. And the pancakes I bought the next morning were incredibly delicious. Doesn’t take much to make me happy. 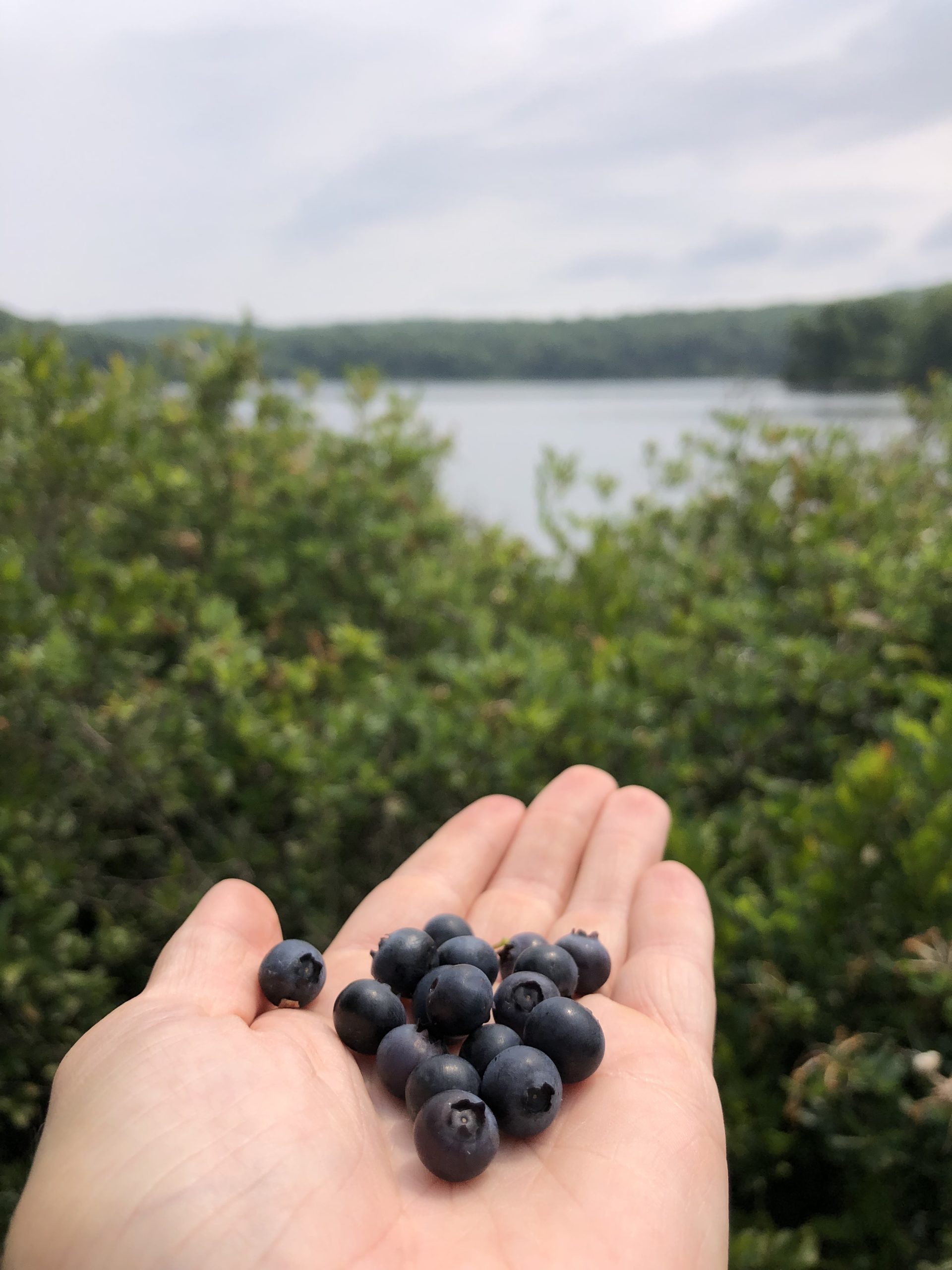 New Jersey felt like a breath of fresh air. There were still tons of rocks, but the forest and the views were more beautiful than Pennsylvania. I constantly found myself stopping to take pictures of the trail and the woods—something I haven’t felt the need to do since Maryland. And the views have actual mountains again rather than just the same ridge line, buildings and fields. I’m not one to say every view looks the same, but in PA they do. 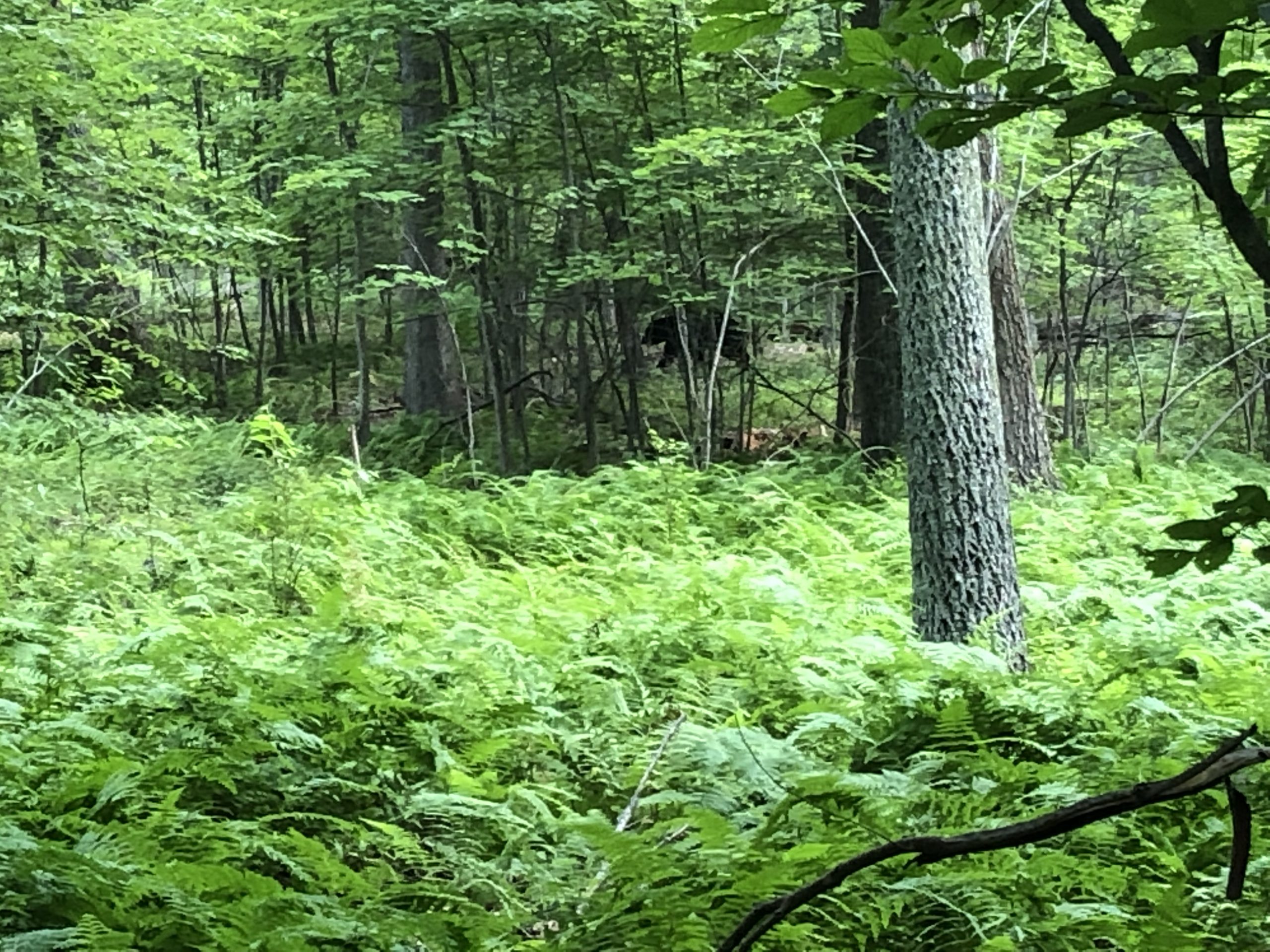 I also saw 6 bears in NJ! Bringing my total bear count to 11. I saw one far far off trail wandering parallel and in the opposite direction from me, and one only 15 feet from the trail staring at me. I had a conversation with him and he decided to mosey on down the hill away from me. The last 4 here in NJ were a mama bear and 3 cubs! She stood guard while her three cubs climbed a massive tree, then she scratched a fallen tree until I left. Sadly, they were far enough off trail with so much underbrush in between that my camera couldn’t really pick them up. 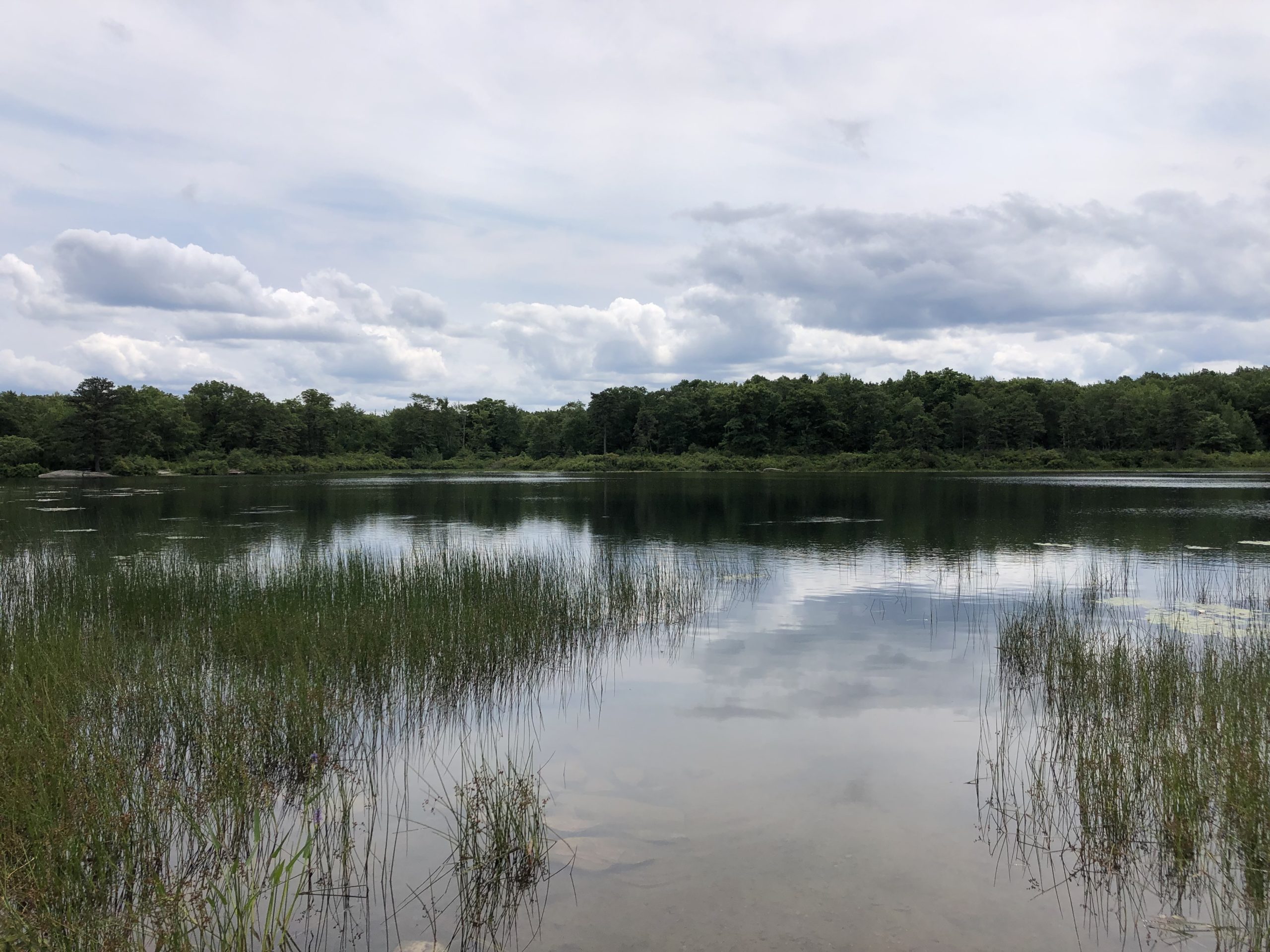 Also got a very nice swim pretty soon after entering New Jersey. Had the lake (honestly just a giant glorified pond) mostly to myself, just one family on the other side paddle boating. And a lot of fish nibbling on my toes.

Thank you New Jersey for reminding me why I love this. 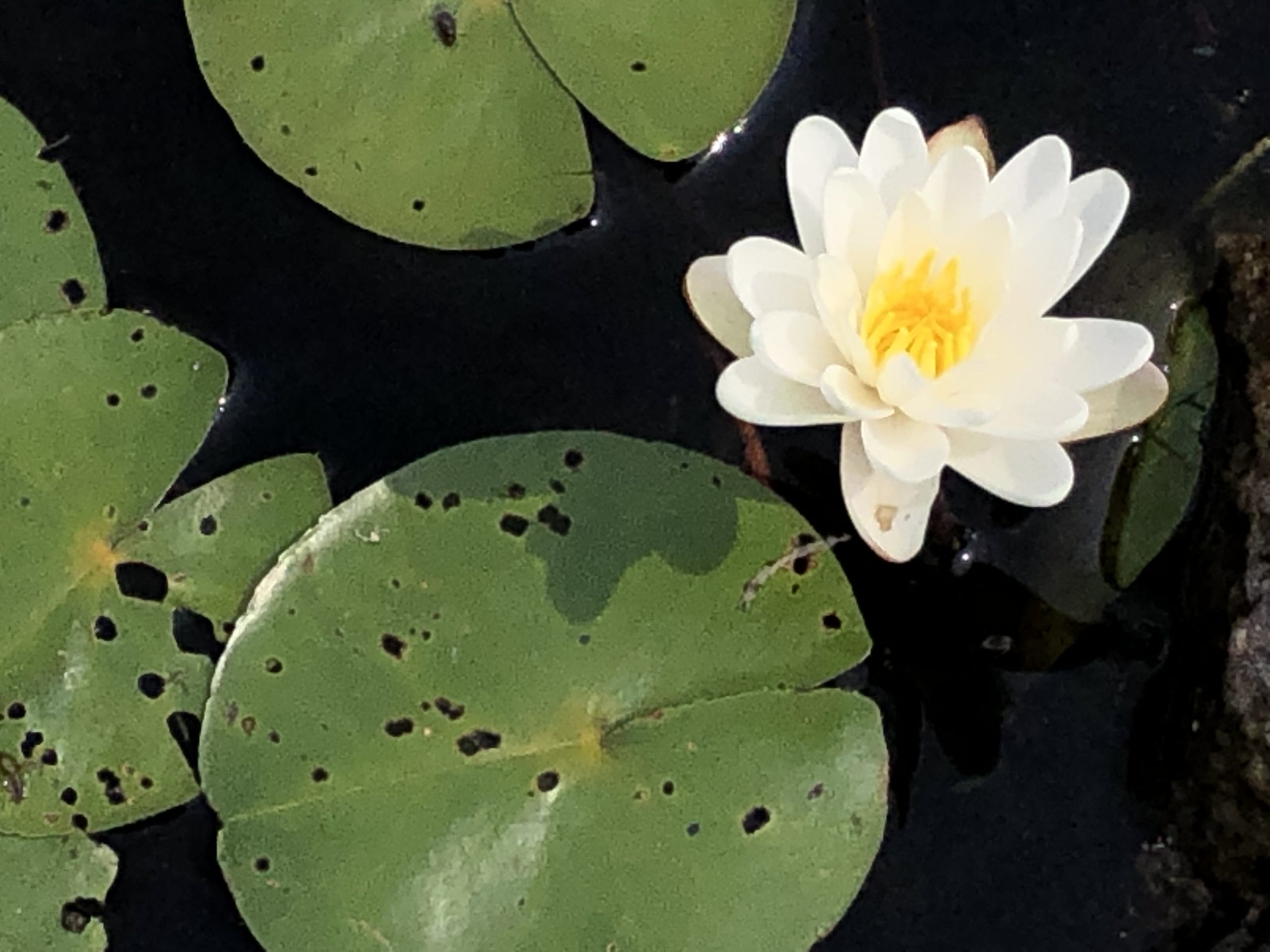 Lots of trail magic lately! (Didn’t get the reference in the heading? Refresh your Disney knowledge and then come finish reading this post, I’ll wait.)

Bob and Frank, two very kind brothers, were set up with a trunk full of car magic a few days before the PA/NJ border. They even had fancy freeze-dried meals! 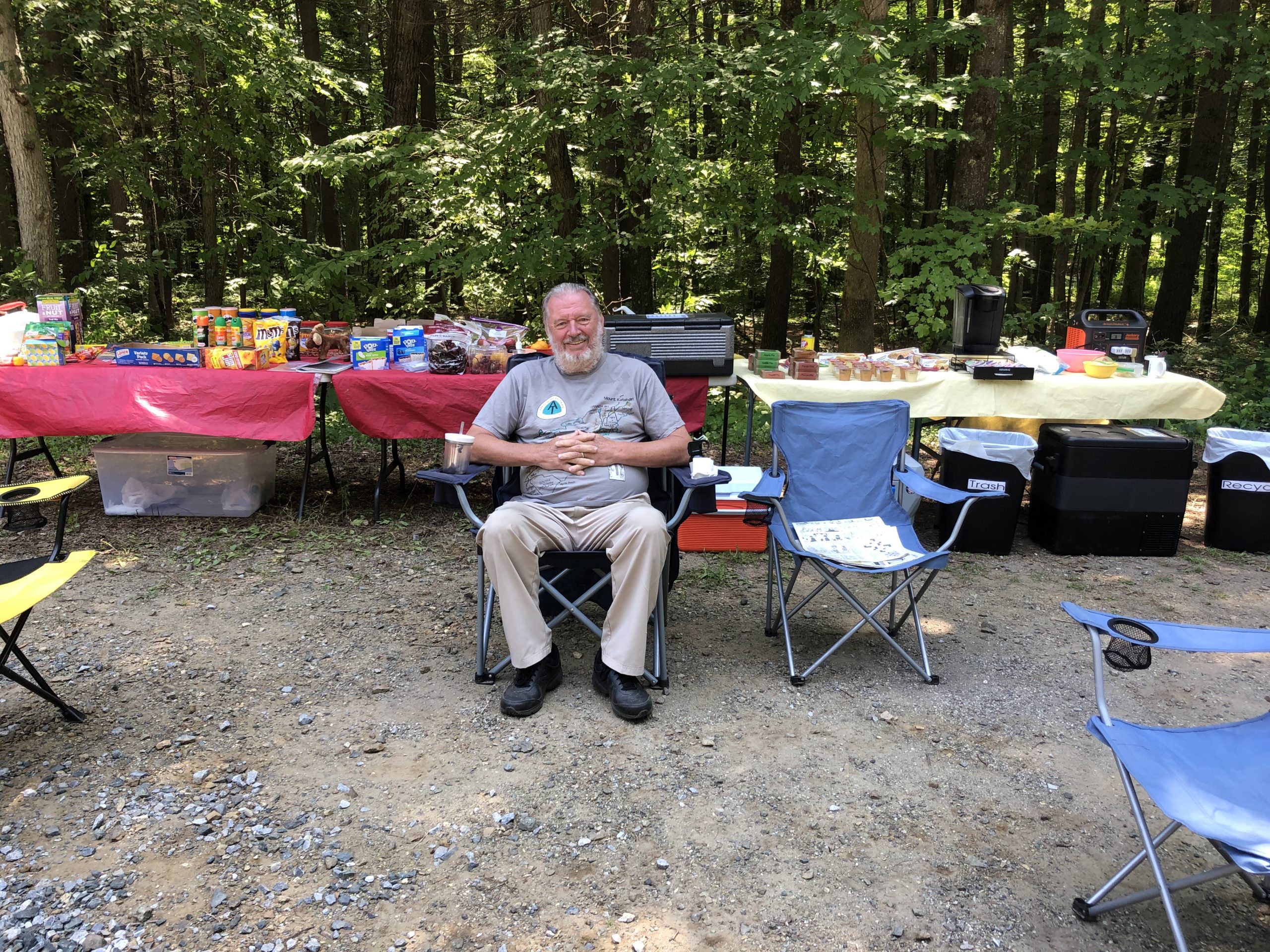 A few days later I met Moose, a New Jersey man who does trail magic every day in July. He had the most amazing spread I’ve ever seen! And one of the most interesting people I’ve ever met. He told me all about his job as a balloon pilot in parades like the Macy’s Thanksgiving Day parade. His favorite balloon he’s worked with is Toothless from the movie How to Train Your Dragon, which is one of my favorites.

The very next day, during a roadwalk, a kind lady named Barb offered me a bottle of water. After chatting with her and her friend Roman for a while, they offered me some homegrown cucumber! It was sweeter than most and so delicious.

Jake is a trail legend totally worth the 0.4 extra (round trip) to see him. I walked down to his spot (an unofficial shelter that is a pretty nice cabin owned by a thru-hiker) for a snack break, and wound up petting him for about 45 minutes. I stopped at one point to check out the shelter, and he brayed very loudly because apparently I wasn’t done petting him. He’s such a sweetie, I’d gladly come back to this area just to see him again. 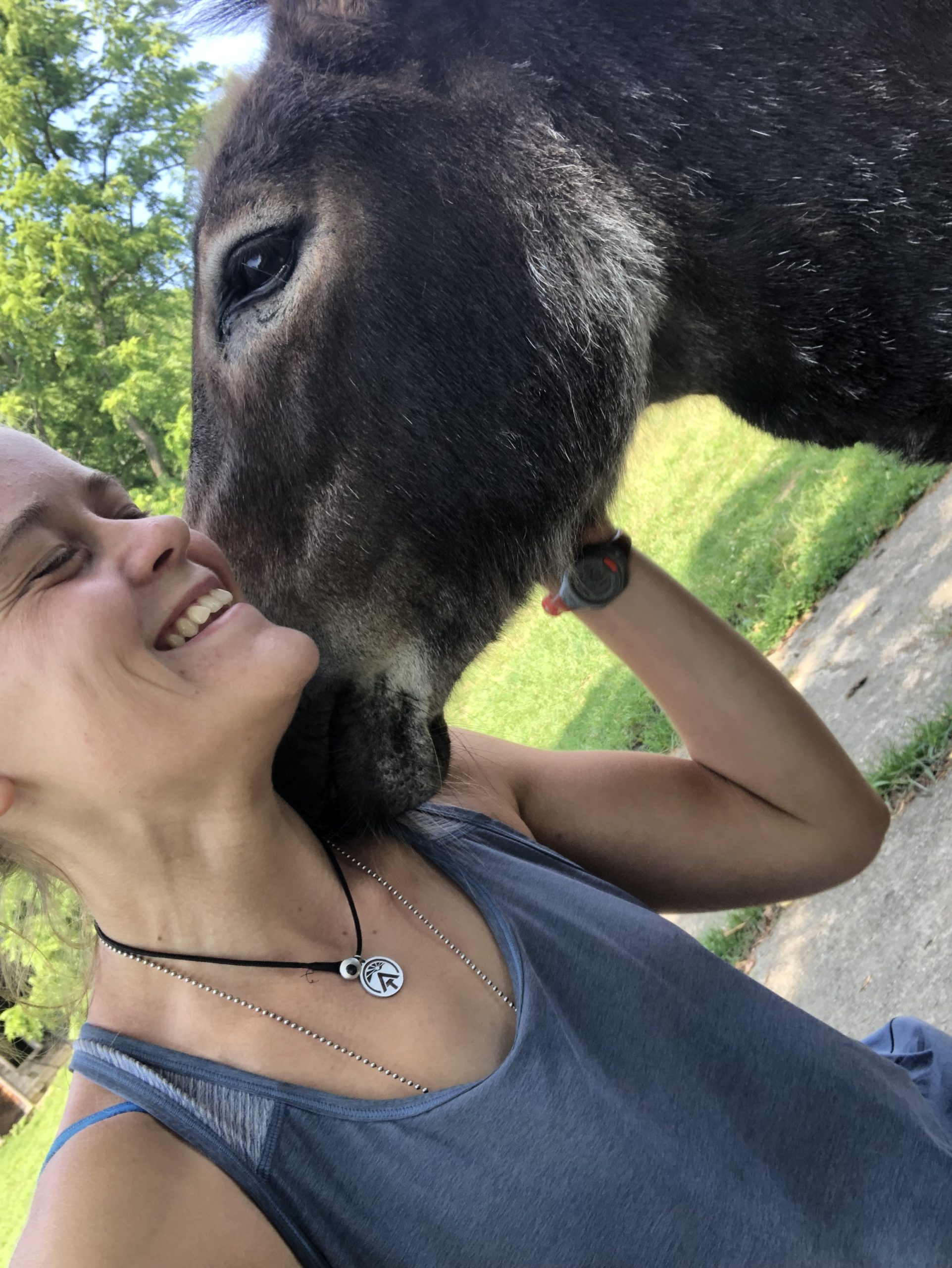 We hit the boardwalk in NJ on the perfect day: overcast and breezy. There’s very little shady spots on the boardwalk, so it was nice not to be baking in the sun.

It was so beautiful! The reeds and grasses swayed in the breeze, the birds swooped and dived all over the place. Very peaceful too. 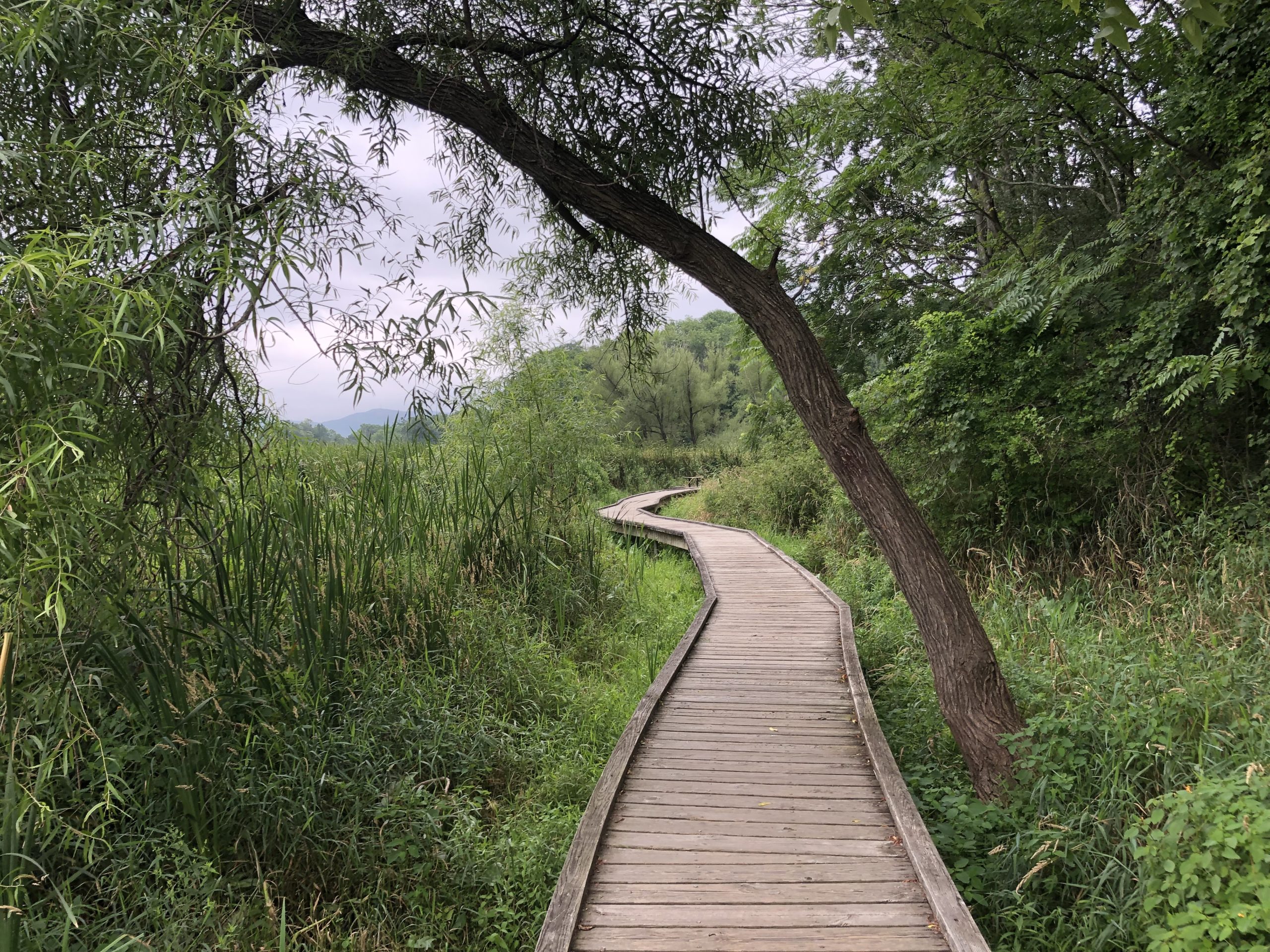 After the boardwalk, we (myself and the Wandering Dames who I was hiking with for the day, check them out on Youtube) stopped at a hotdog stand for a snack break. I got a hotdog with chili, chips and a powerade, which was the perfect amount to fuel me up the Stairway to Heaven.

The Stairway to Heaven is a pretty steep climb with a beautiful view as a reward, and more than just rocks as obstacles. When we climbed this, there were TONS of dayhikers out enjoying the day, which I LOVE to see. But it was verging on crowded, and we had to be careful weaving through people without falling on the rocks.

In Warwick, New York is an awesome drive-in movie theater where the owner lets thru-hikers camp in the back and watch movies for free. He even provides battery-powered radios so we can hear.

There were a bunch of hikers already camped there when I arrived, which made for a super fun night. Three movies started at dark: Black Widow, Space Jam, and Old. I watched Space Jam because Looney Tunes is my childhood. We had two radios, one on the left and one on the right for a surround sound effect. 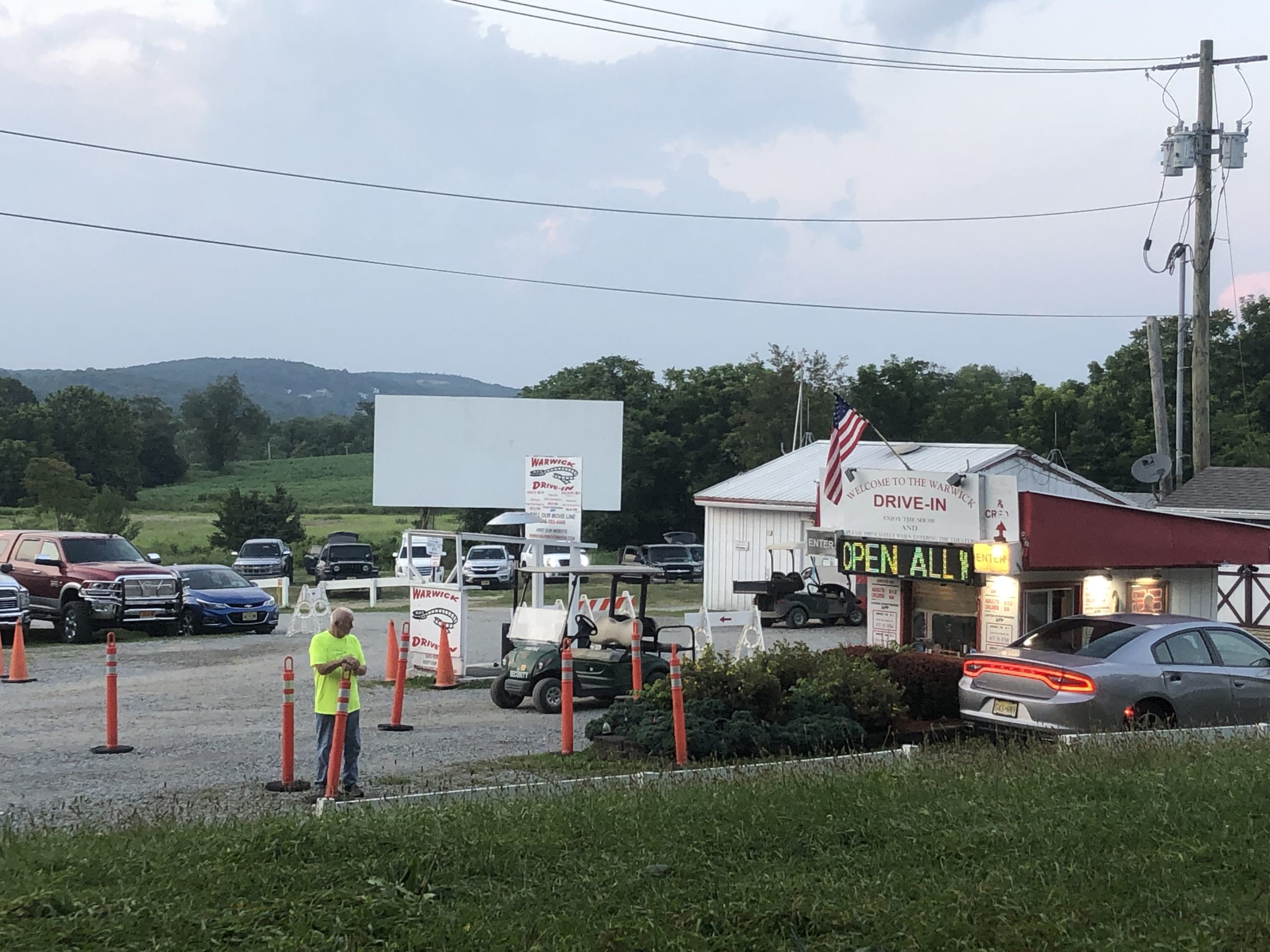 During the movie, we watched as multiple thunderstorms went literally right around us, just on the other side of the drive-in. Lightning streaked and thunder rumbled, moving with the clouds from the left far corner of the drive-in, to the right, to beside but not on us. It was really incredible to watch. Only the final storm in the last 5 minutes of the movie actually rained on us, but instead of retreating to my tent, I grabbed a radio and hid under a little shack till the rain stopped.

When the movie ended, instead of staying up for whatever horror movie was playing next, I went to bed cause it was way past hiker midnight. 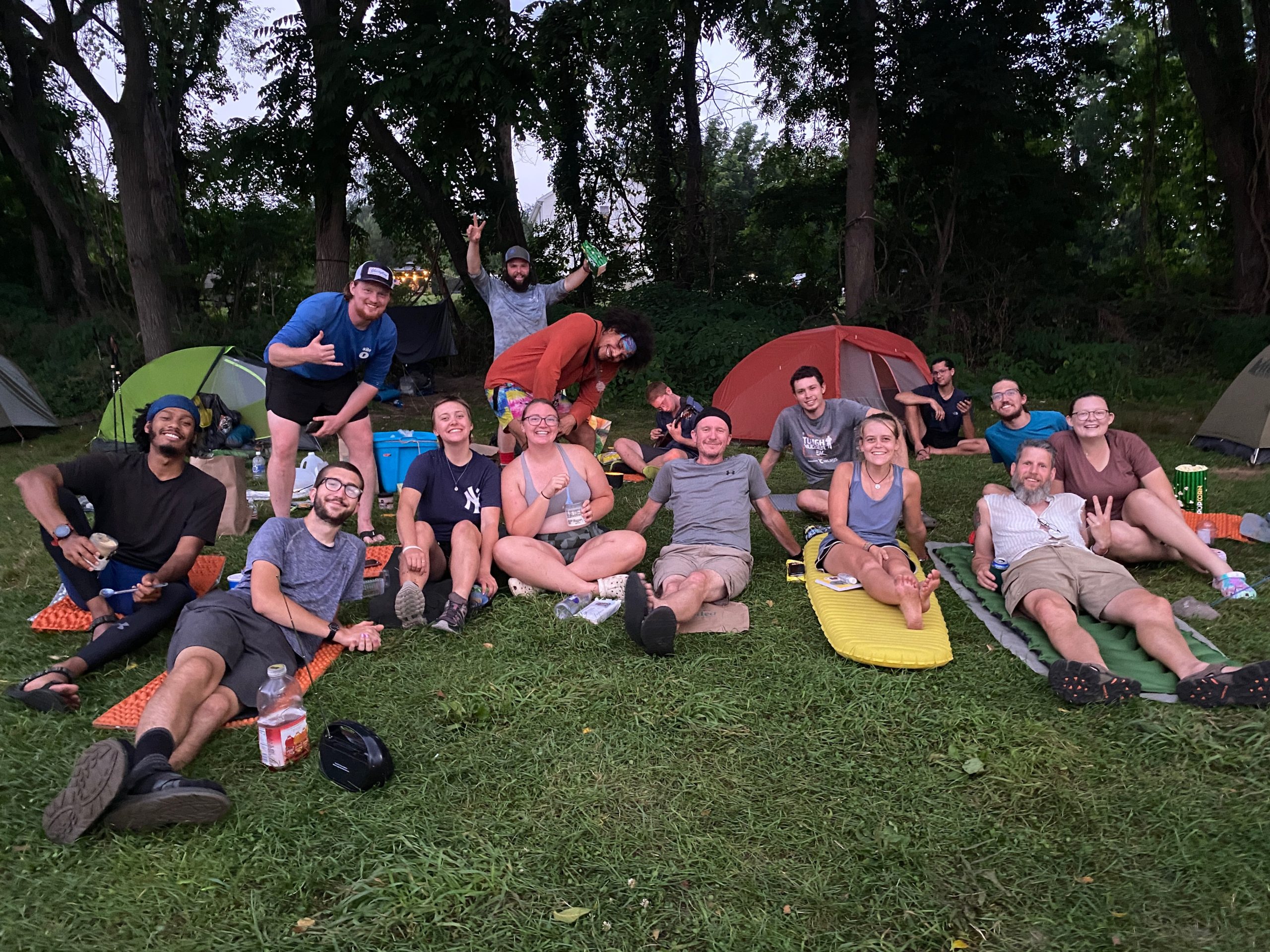 The next day, I got a ride back to the trail from a great guy named Mark, who also picked me up at the end of the day and took me into town (after getting ice cream from Bellvale Creamery which is AMAZING). I got a room for the night in Greenwood Lake at a little motel called Lake Lodging which is run by a very sweet couple. I relaxed in my super comfy bed and celebrated officially crossing into New York!!! Eight states down, six to go! 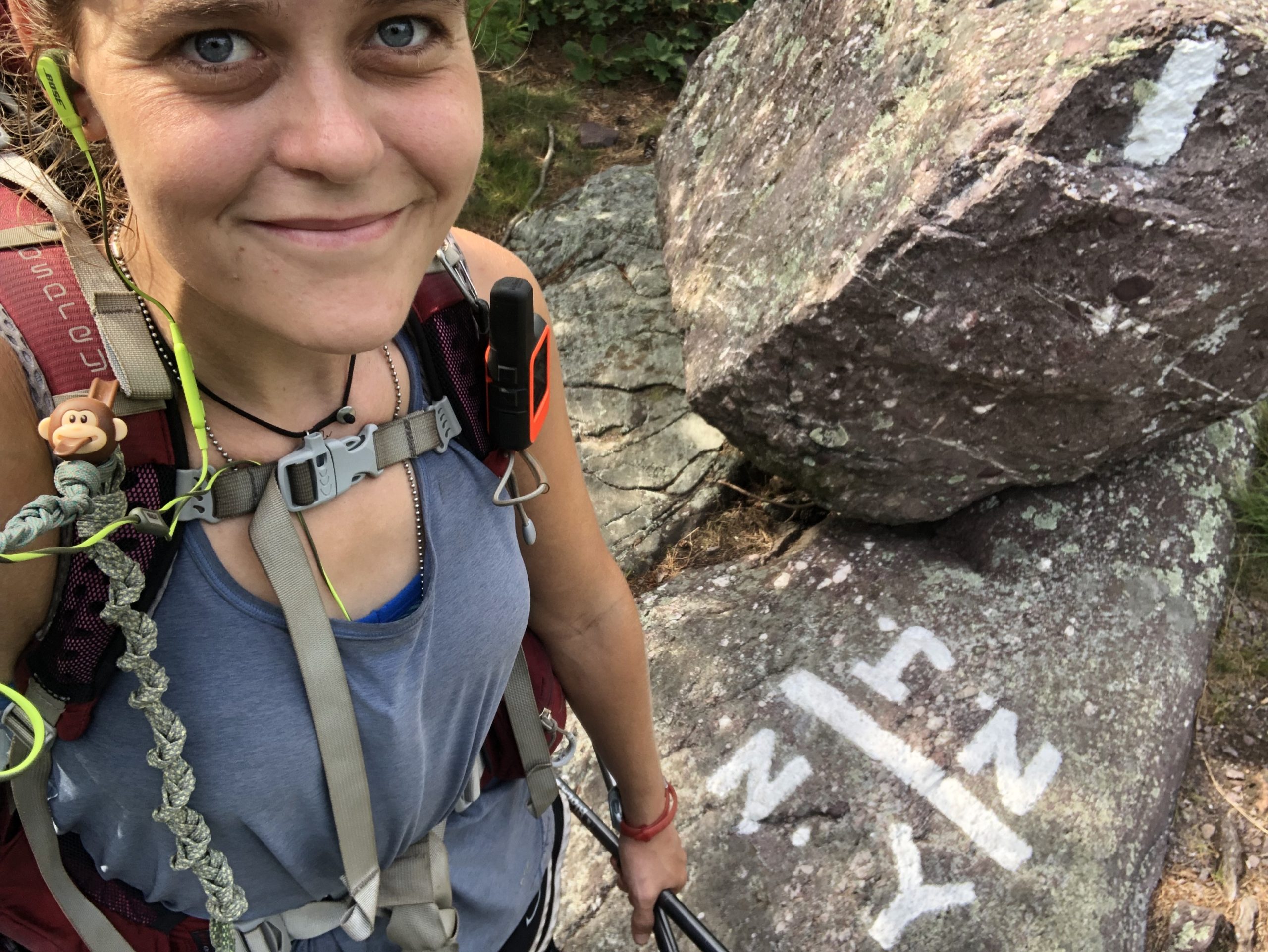