If you missed my last post, I had to get off trail for a spell to recover from having unplanned sinus surgery. After being discharged from the hospital, I went home to South Carolina for two weeks before returning to the doctor to get everything checked out. He said things were healing good, so I immediately hopped back on trail that afternoon for a short slackpack. In total, I was off-trail for about 2.5 weeks and then slacked with my dad for 3 days before loading up Clifford (my backpack) and heading north alone. Here’s the daily breakdown:

To return to Pennsylvania I drove up with my dad, my mom wanting to come too but needing to stay with my sister and her busy social life. I just wanted to take a quick second and say thanks Dad for driving up with me and slackpacking me for a few days to make sure I was feeling good enough to hike before you returned to SC.

The wrath of Elsa

And not the Disney princess. It was pretty rainy my whole first week back, but on day 95 we definitely felt the full force of tropical storm Elsa’s hatred for all land dwellers.

I was hiking along, minding my own business, when thunder rolled off in the distance. No big deal, I’d hiked through many thunderstorms by this point. The thunder rumbled louder and louder as the storm rapidly caught up to me, drenching me with rain. I picked up my pace, wanting to get down from the somewhat exposed ridgeline I currently followed. I could not move fast enough.

Lightning struck all around me as if playing Wack-a-Mole, with me as the mole and the large clearings in the trees providing the lightning with opportunities to hammer down on me. These clearings were about 50 yards or more, and I was easily the tallest thing in them. I’m 5 foot 1. I’m never the tallest thing anywhere. What a wonderful time to find the exception.

After one particular strike felt hair-raisingly too close, I sought shelter under the first clump of trees I found. At this point, the wind began to howl so hard that my clump of trees blew in circles, leaving me vulnerable to the open sky and its electric spears. Minutes, hours, months later (ok it was definitely only minutes but it felt like longer), a hiker darted past my pathetic hiding place and I made a split-second decision. I’d much rather die running with him, than alone under my clump of trees.

When I was about 10 feet from catching up to him, the world flashed blue and my head exploded with the boom of thunder. At the same moment, a tree snapped to the ground and landed on the hiker ahead of me. Still feeling the tingly effects of the strike along my skin, I closed the distance between me and where the hiker had disappeared beneath the leaves and limbs. He was still trapped beneath the branches and not moving.

I don’t know how long it took me to get the branches off him, probably only seconds but it felt like minutes. By the time I got them off he was moving a little, but still seemed a little dazed. Another lightning bolt close behind us jolted him out of it, and we took off running down the trail. The halting notes of Bennie and the Jets soundtracked our desperate flight through the storm, coming from the guy’s phone somewhere in his pack.

After what seemed an eternity, the lightning stopped and the thunder faded into the distance, the rain slacking until it ceased all together, ending what was easily the most adrenaline-pumping afternoon of my life. 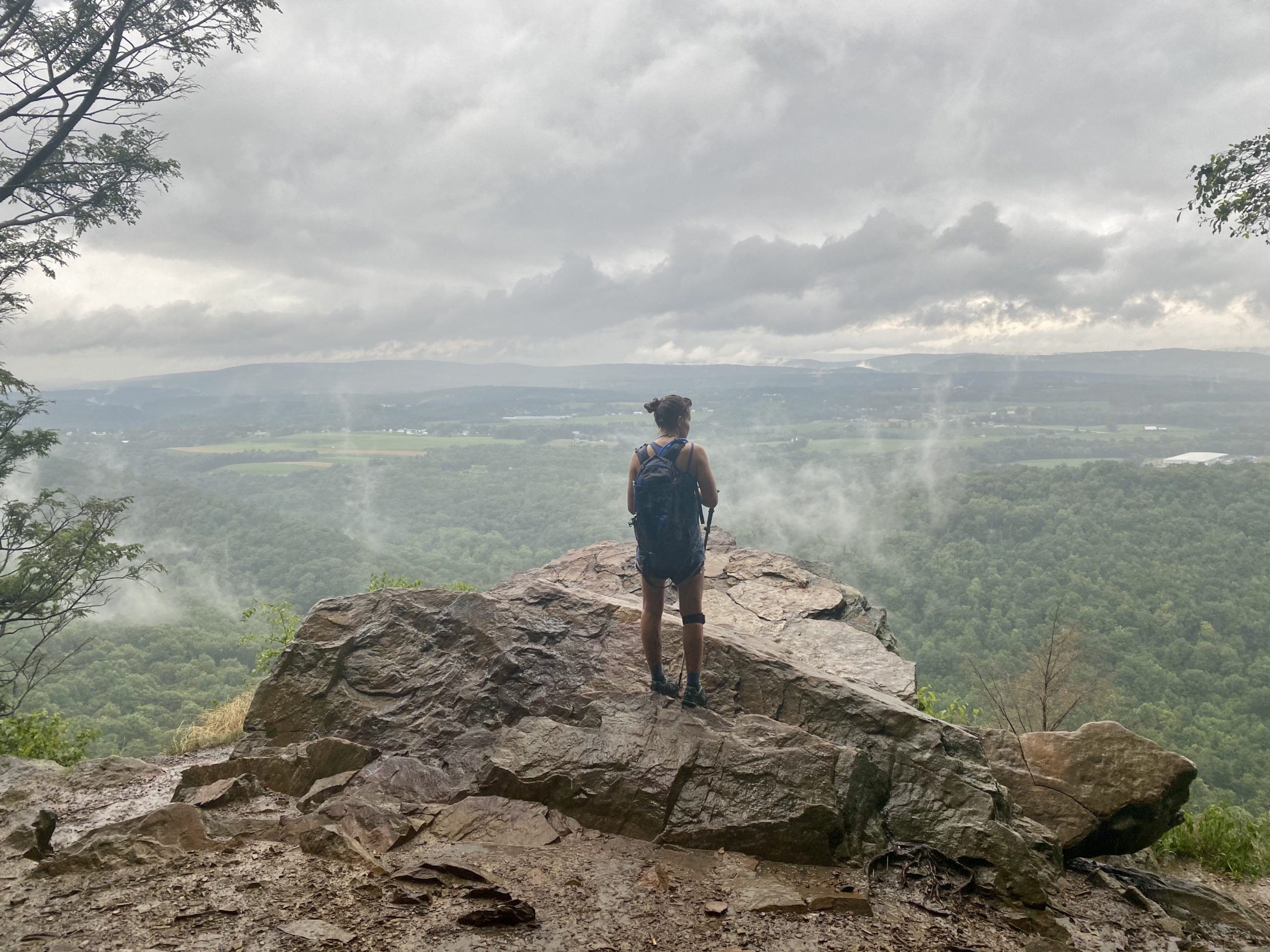 All of the bugs

All the gnats in Pennsylvania must’ve heard about my newly renovated sinus cavity, cause SO MANY gnats have gone up my nose lately…

I know. Gross. But the point of this blog is to show my hiking life, and sadly that is a part of it. The gnats go up, I can’t get them out, and then they crawl around my nose till they find the opening to my throat and then I can swallow them and put me out of my misery. Ok moving on. 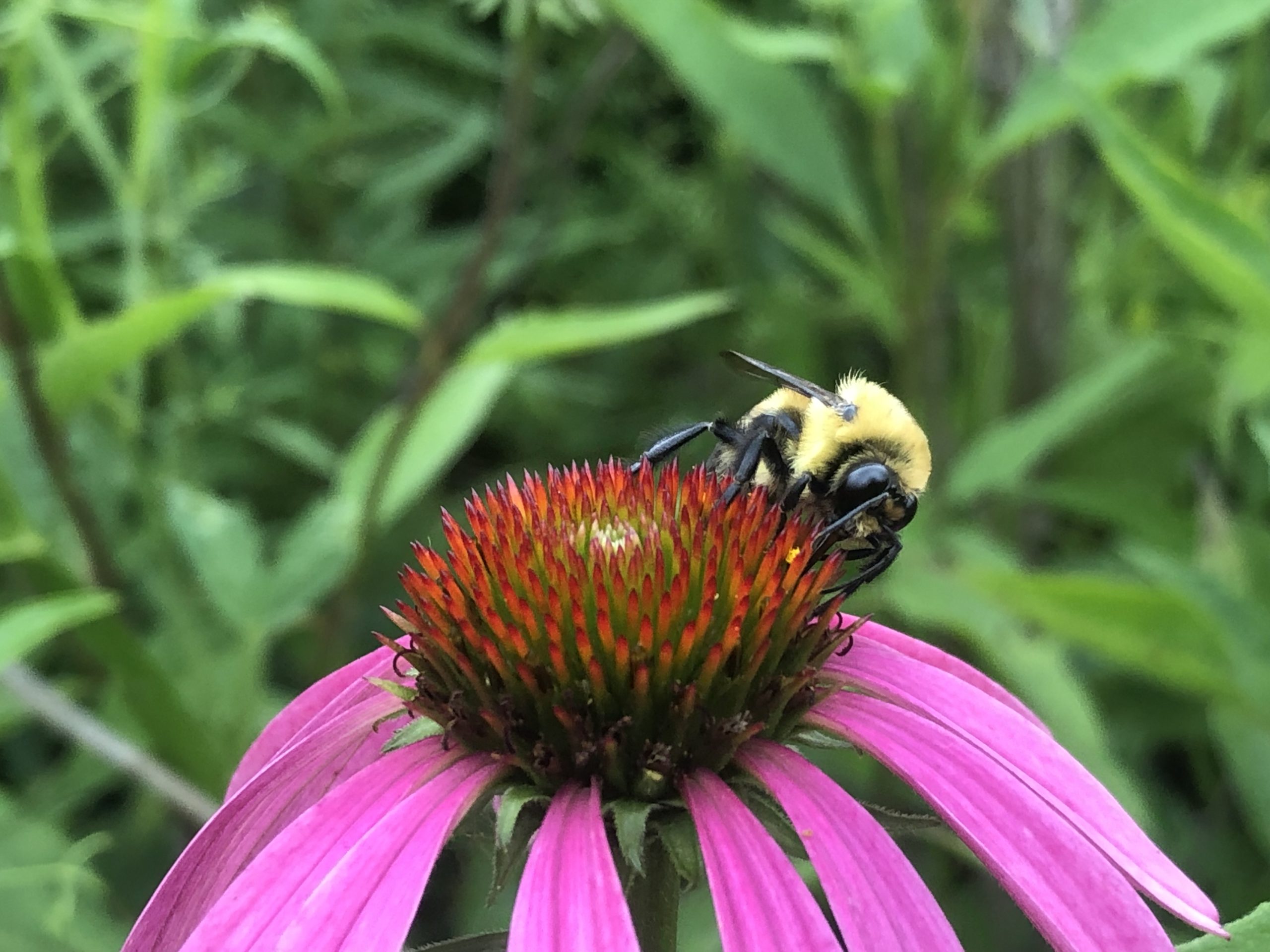 But one more quick (much less gross) bug story. While eating a cheeseburger in a parking lot, I subconsciously swatted at a buzzing noise above my ear and hit a bug that didn’t fly away. It was stuck in my hair. And turned out to be a bee. My dad used his leatherman pliers to pull it out so he wouldn’t get stung. There’s no telling how long it’d been in there, I’d been hearing buzzing all day because bugs are literally taking over the world.

Later in the shower I found the bee’s head, very much still tangled in my hair. 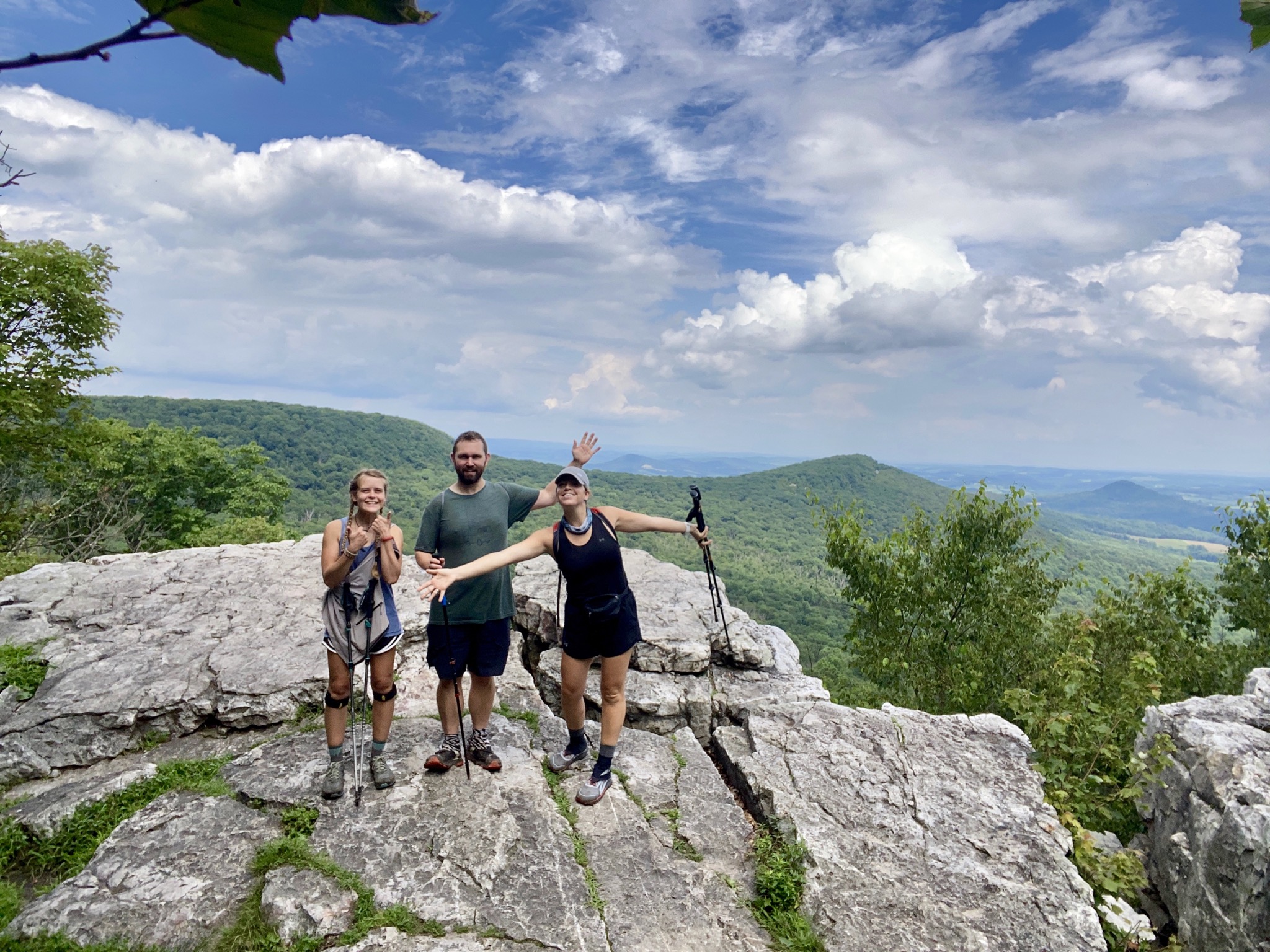 Being off for 2.5 weeks means everybody I know on trail is way far ahead of me now. But that’s fine, cause there’s plenty of people to meet out here. My first night back on trail I met a lot of cool people, and ended up hiking with a few of them for a couple days. 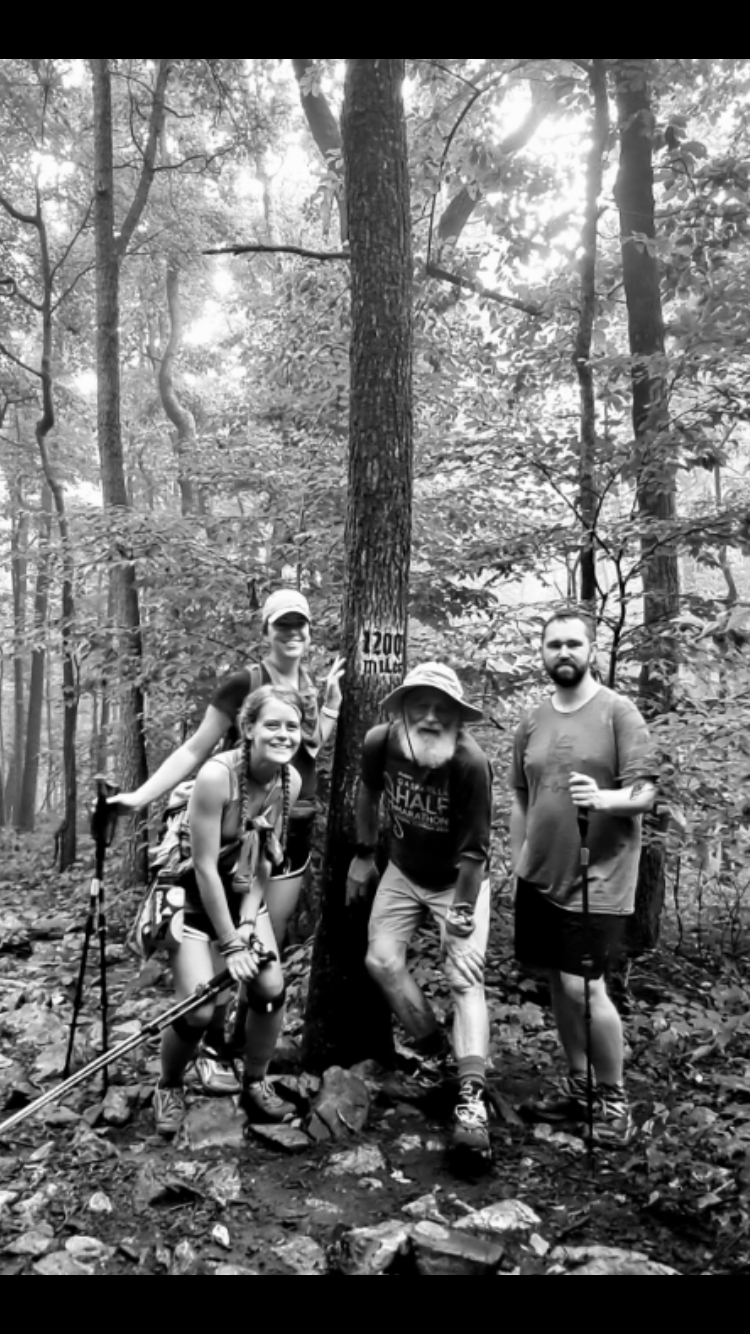 We stayed at the 501 Shelter which was awesome. Super nice caretaker who made us epsom salt foot baths and let us charge our stuff at an outlet on the side of his house. The shelter itself is huge and has a sweet skylight that was so cool to watch a thunderstorm through. 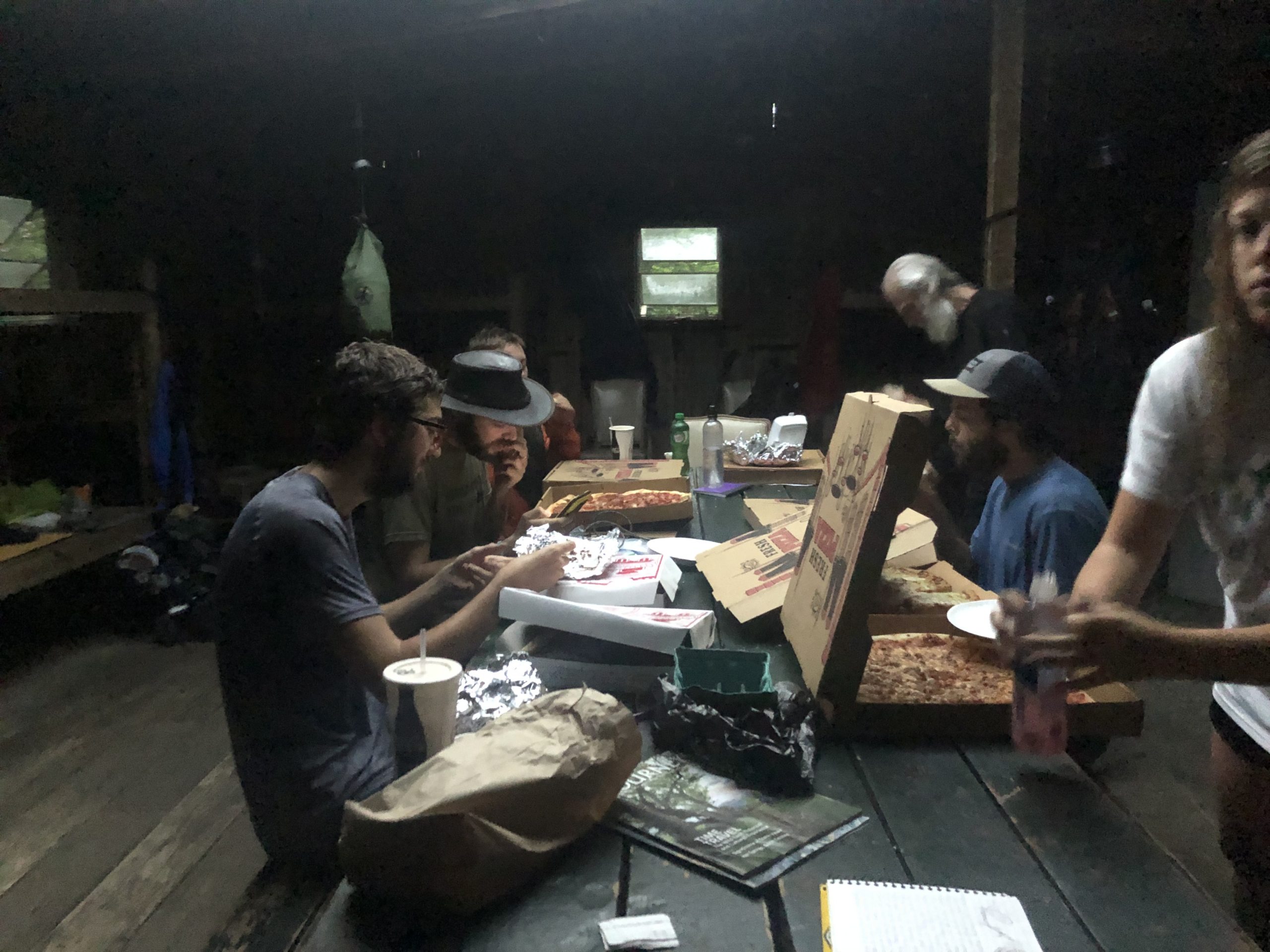 Crick’s dad slackpacked us on day 98 and 100 during which we hit mile 1200 and met Nimblewill Nomad! Don’t know who that is? Google him, I could never do him justice. 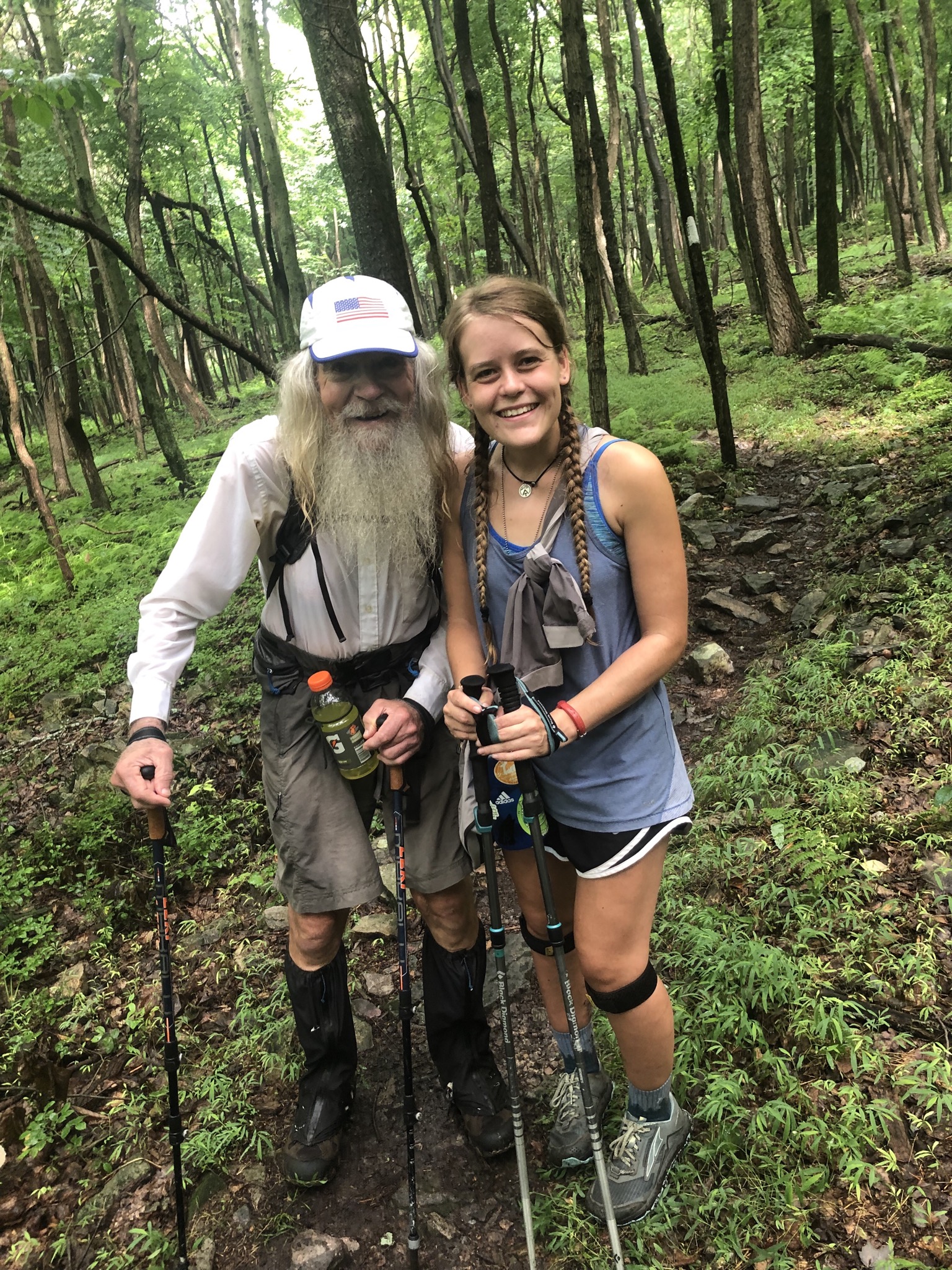 Highs and lows of Port Clinton/Hamburg

We’ll start with the lows. The hike into Port Clinton from the shelter was ROUGH. My head started hurting randomly for like 10 minutes at a time, all behind the eye where the surgery was. Which was worrisome and made the hike feel like it lasted forever. The decent into town is a bit slippy—pretty steep downhill on loose scree/pebbles. So not terrible, definitely done worse, but far from ideal.

Now for the highs. Which, as always, outnumber the lows. Port Clinton doesn’t have anything as far as restaurants and resupplies go. So I decided to hitch 2ish miles down the road to Hamburg. Cabela’s has a shuttle that runs from one to the other, but it was in 45 minutes so I thought I’d try hitching till then. I got a hitch in like 2 minutes from a guy named Eddie who’s normally a shuttle driver but wasn’t currently shuttling. Fastest hitch I’ve ever gotten.

Eddie dropped me at Five Guys which I’d been craving since that morning when I saw Hamburg had one. While waiting in line at Five Guys, a man tapped me on the shoulder and asked if I was a thru-hiker and I said yes. He handed me $10 and said he’d like to buy my lunch. I thanked him and introduced myself. Thanks again Mr. Paul.

The final high point was my new friend Crick offering to let me stay in her hotel room, which was way better than staying in the pavilion in Port Clinton. Good friends and a good shower. Not much better than that. 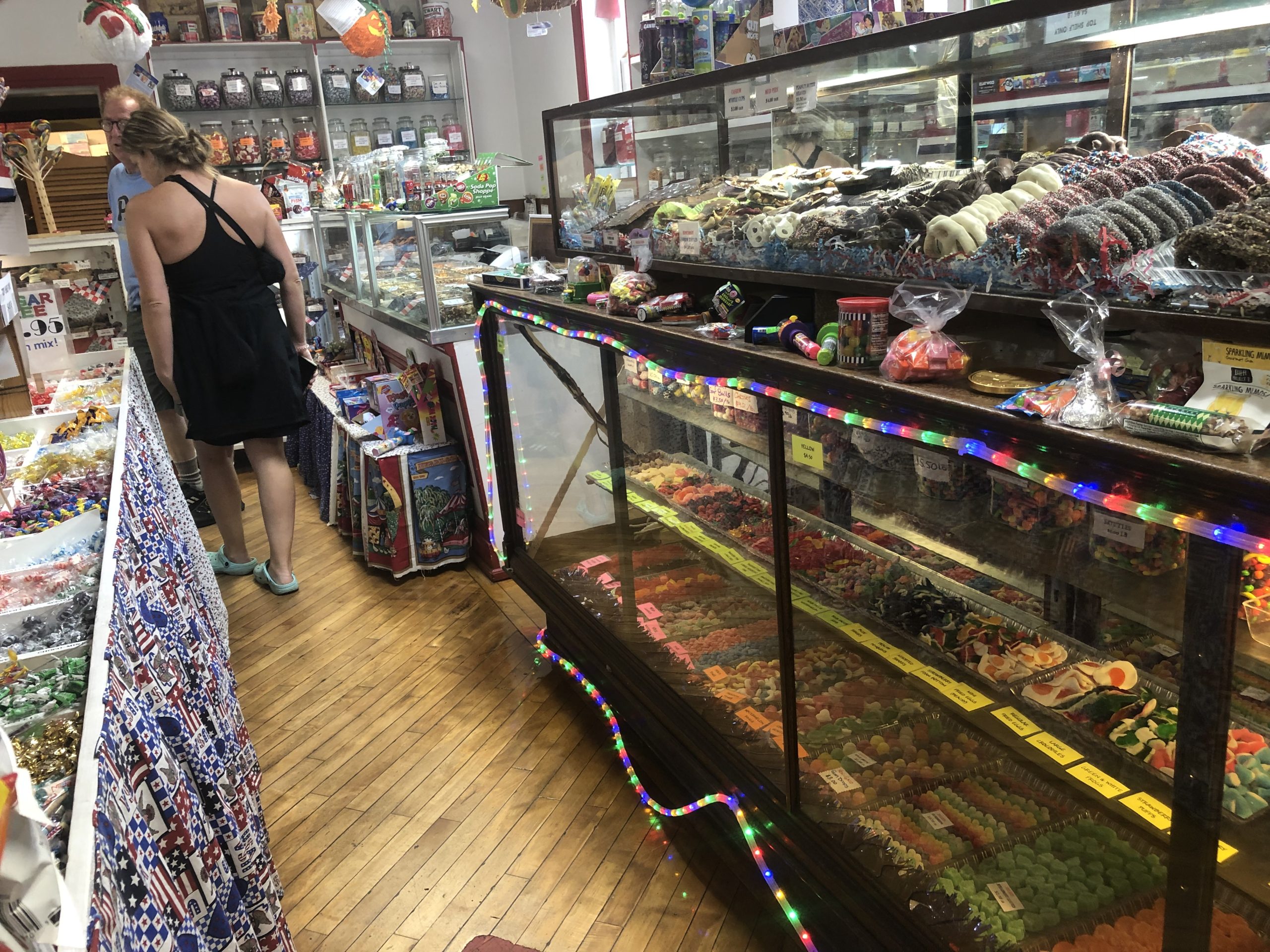 Lesson learned: listen to your body!

Which I am terrible at. I woke up on day 100 with a killer headache after experiencing intermittent headaches all the day before. Headaches like those I had just after my surgery. So not great. I’d done 100 miles in the last week, which is pretty standard for me, but maybe not the best idea right after returning from surgery. I briefly considered zeroing, but then Crick said her dad could slackpack us again and I told myself that would be fine cause slackpacking is easy.

I should’ve zeroed. My head felt like thunder was rumbling through it all day. Making what should’ve been a pretty easy 15 into a huge struggle. We did get some good views though. But I was exhausted by the end of it. Which convinced me to actually listen to my body.

Much as I hated to take a day off so soon and lose my new friends, my post-surgery head wasn’t ready to push things as hard as the rest of me is used to. So I zeroed, and then slackpacked an easy 11 miles (thanks SherPa Mike!) to give my head the rest it craved.

Now my head feels back to normal and ready to go again, but maybe not full speed. Listen to your body kids, don’t turn an easy hike into a miserable trudge.