The Presidentials – The Heart of the Whites

This section of the White Mountains is one of the most noteworthy. We accomplished it surprisingly fast and learned a lot about work-for-stay.
Ian and I had hiked the Presidentials before, so we knew what to expect. It took us four and a half days. Our initial plan was to hike across the Great Gulf Wilderness to the Osgood Campsite and hold up to wait out some bad weather. But, the bad weather never materialized so we kept going up Mt Madison. The Osgood Trail up Madison reminded me why I hated it so much the last time. It’s about 5,400 feet of “up” over about three miles.
Nevertheless, we found ourselves on Mt Madison about 2 PM. We had no plan on where to stop for the night. We were now officially above the tree line for the next 10 miles or so. We did not want to go down any more elevation than absolutely necessary, so we decided to try for work-for-stay at Madison Spring Hut. 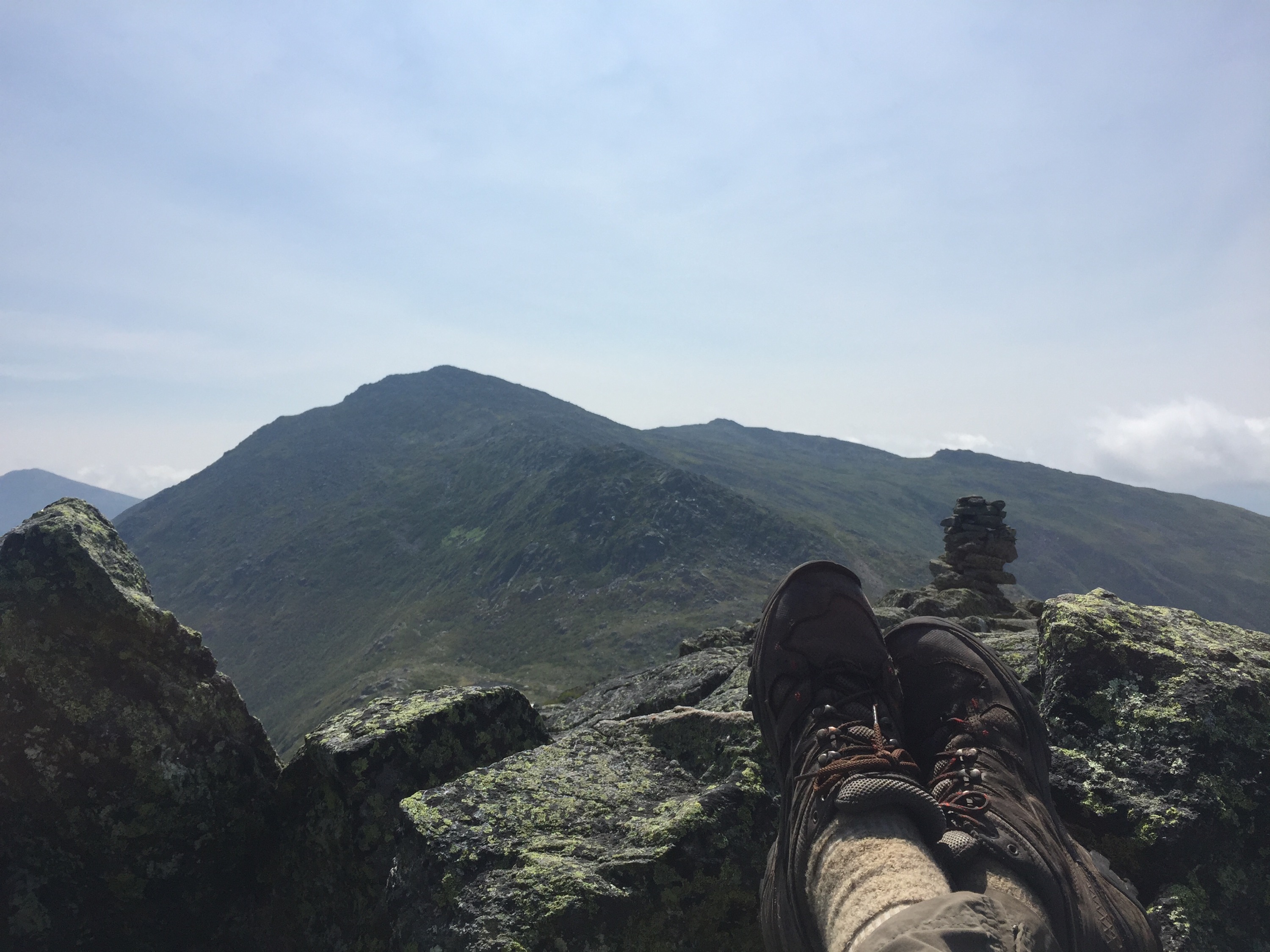 Cooling our heels on Mt Madison

You can’t show up and ask too early, so we cooled our heels and enjoyed the view on Madison until about 3:15, then descended to the Hut. We were lucky to be there late enough and  the first to ask. We washed dishes and got to eat leftovers and sleep on the floor.
At Madison, we met a northbounder named MacGyver. He gave us some good tips on stealth campsites across the Whites. The AMC charges an $8 fee to use the established sites. Ian and I had already paid this at the Imp campground in the Carter-Moriah Range. I’ll write more about this at a later time. The fee is a strong topic of discussion among thru-hikers. I’m not sure how I feel about it yet. 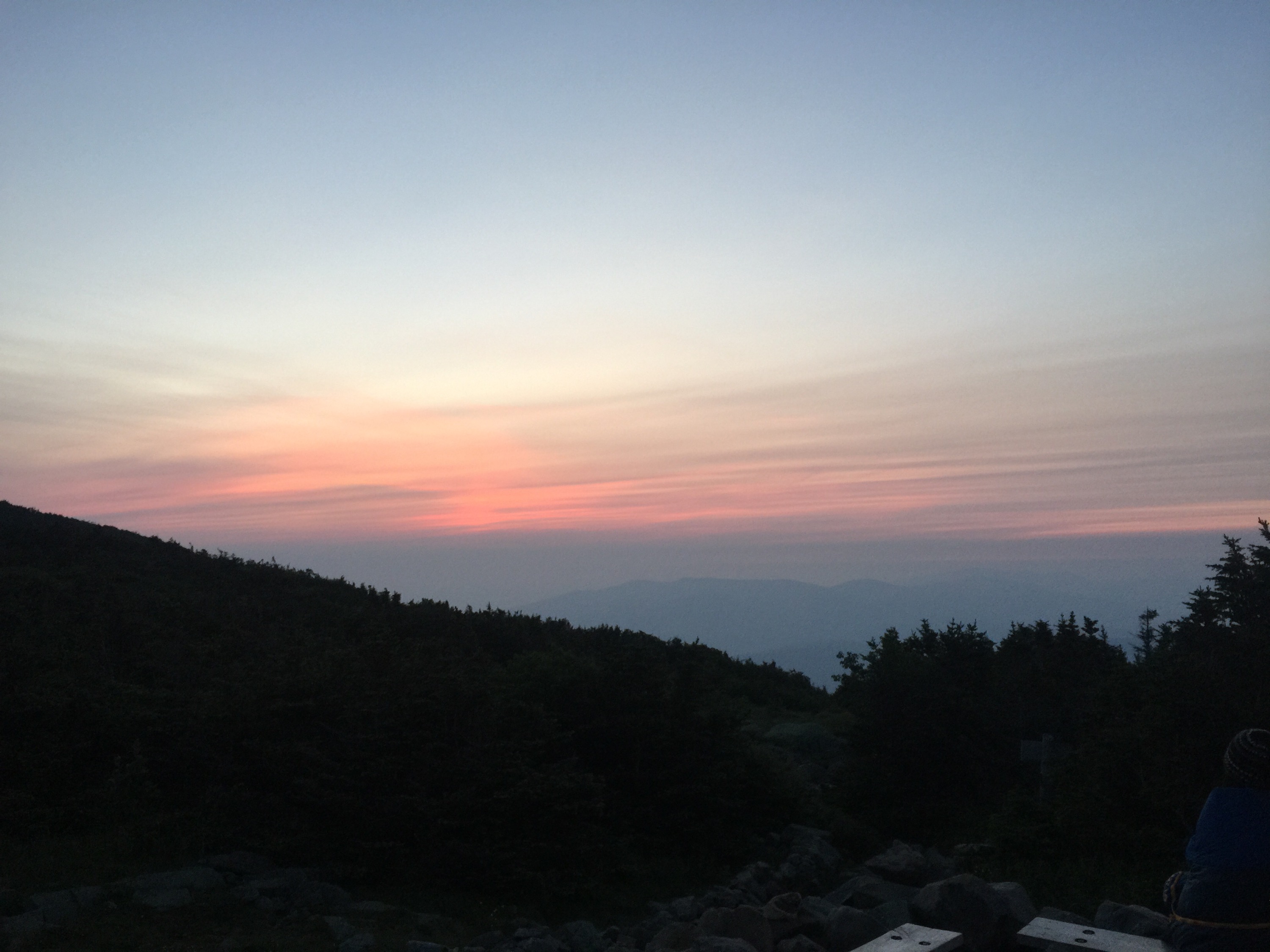 The next day we set our sites on Washington and on Lakes of the Clouds. We left Madison Spring Hut at about 5:30 and made good time. We were on Washington about 11:30. Ian decided he had to make it to the summit before the cog railway train, so he ended up running up the final stretch with everyone on the train yelling and waving at him. He beat the train but was exhausted – and I’m pretty sure no one on the train knew it was a race.
After sampling a lot of the snack bar on Washington (pizza, hotdogs, and cookies) we headed down to the Lakes of the Clouds Hut and got there about 1PM. There we got our first Trail Magic. One of the guests asked Ian if he was a thru-hiker and if he was hungry. Ian gave the standard answers: “yes”, and “always”. So we got two apples, the first fresh fruit we’d seen in a while.
We were tired but it was too early to stop, so we moved on, reaching Mizpah Hut at around 4 PM. We asked for work-for-stay again and got it along with another hiker couple. Ratman and Tumbler were on their third thru-hike. They met on the first one, got married, and were known as the “Honeymooners” on their second. This time they decided to see what the trail was like southbound.
At Mizpah a lot of the guests asked us questions about our thru hike, so we had a good time talking and sharing our adventure. This would make our next work-for-stay even better!
After washing dishes again, we slept on the floor and got back on the trail at 6 AM. We ate breakfast on Webster Cliffs. We met a bunch of NOBOs: Superman, Heavyweight (who got his trail name because he is actually gaining weight on his hike), and Porch.
We were down at Rte 302 before noon, completing the Presidentials in only two and one half days! A big surprise to us. Given that we had time, we decided to hitchhike to the Highland Center. A thru-hiker Linda and I met last November at Zeeland Hut, Coconut, was working there. 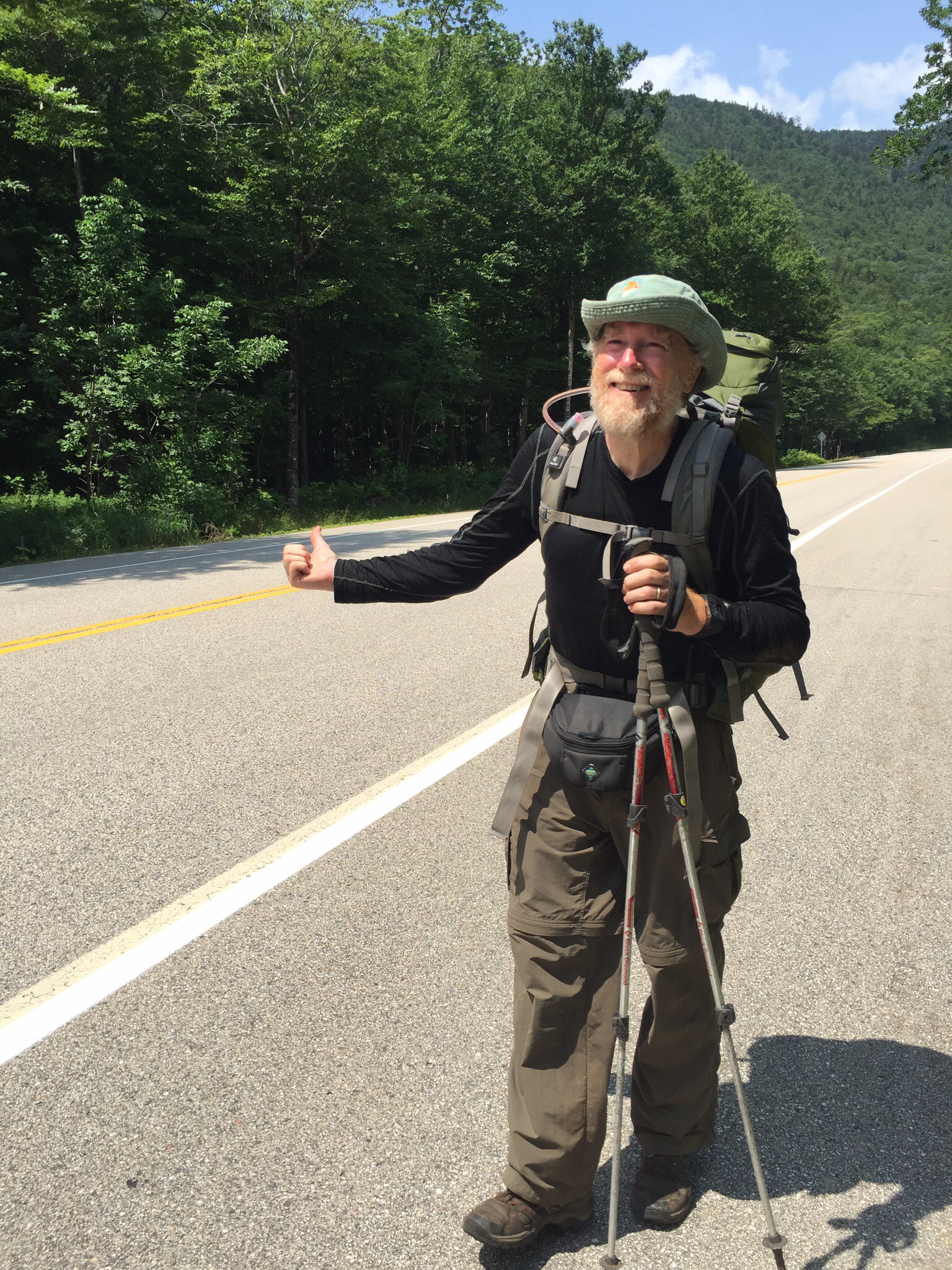 I went down to the crossroads, tried to flag a ride

Unfortunately, we suck at hitch hiking. After walking for a mile and being turned down ( cars actually sped up when they saw us). We stopped at Willys House and settled for ice cream. By 2 PM we were back on the trail and spent the night at Ethan Pond Shelter. The caretaker there, Adam, was very nice, and we met two schoolteachers, one from FL and one from CA, who were section hiking New Hampshire.
We also met two college kids, engineering students at UNH, who were section hiking the Presidentials. They both worked for the park service during the summer. One was a civil engineer, the other an environmental engineer, and since they both worked in the whites, they said they both worked with poop. This, it turns out is quite a major engineering challenge in the White Mountains.
< Previous Post
Next Post >