The Race to Uncle Johnny’s: Three Days of Hiker Life

I didn’t think I’d be posting again so soon, but the last few days have been quite the adventure! I reconnected with my speedy friends in Hot Springs on Sunday and found out that Pantless needed to be in Erwin on Wednesday morning to catch a shuttle off-trail for a wedding. So Ibex and I decided to join them for a three-day sprint of 70 miles, arriving at Uncle Johnny’s hostel on Tuesday evening. They’re both a bit zippier than me, so it was a fun challenge to keep up, and I did my first marathon day of the trail along the way! 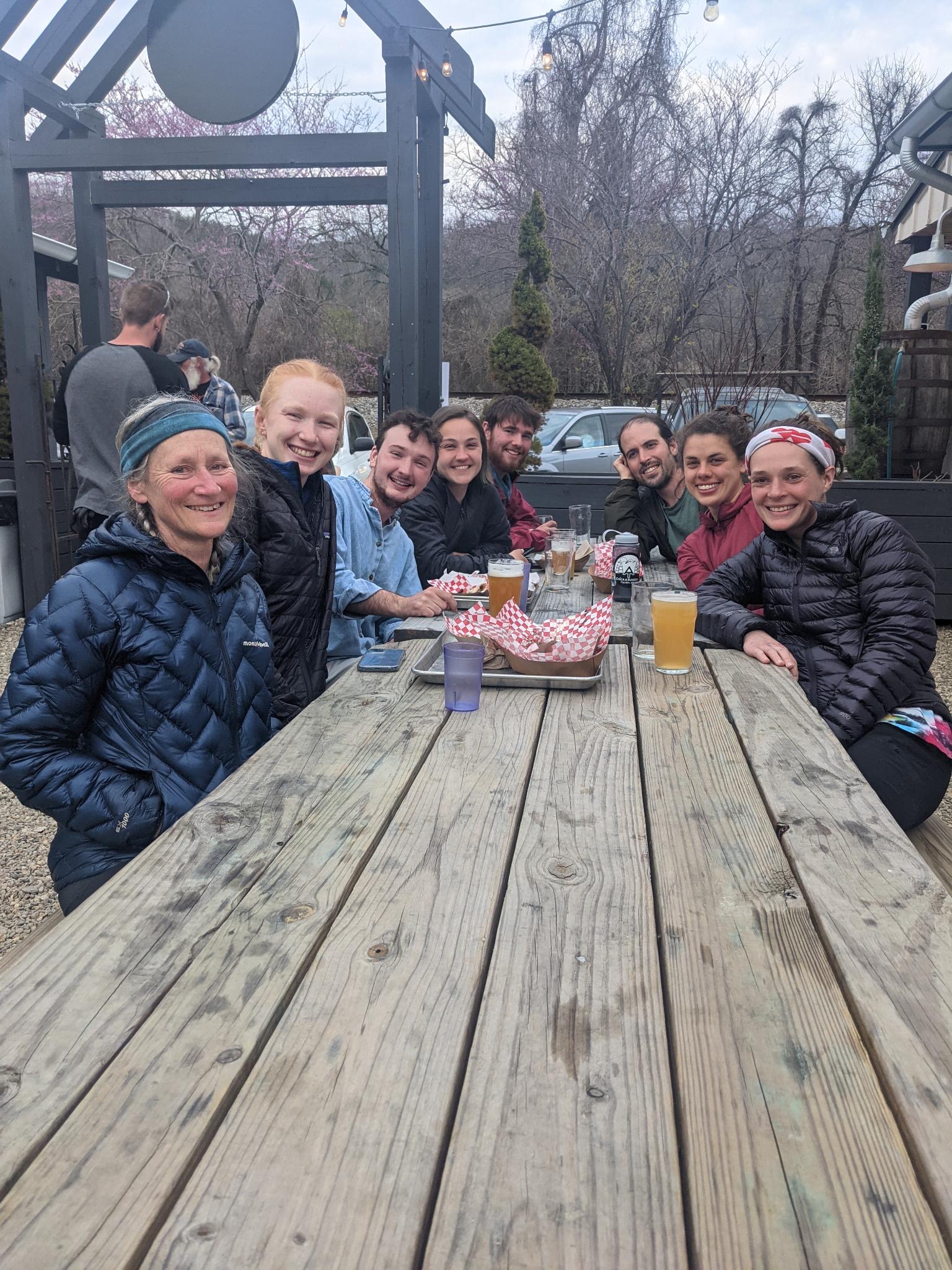 Day 1: A Head Start Out of Town 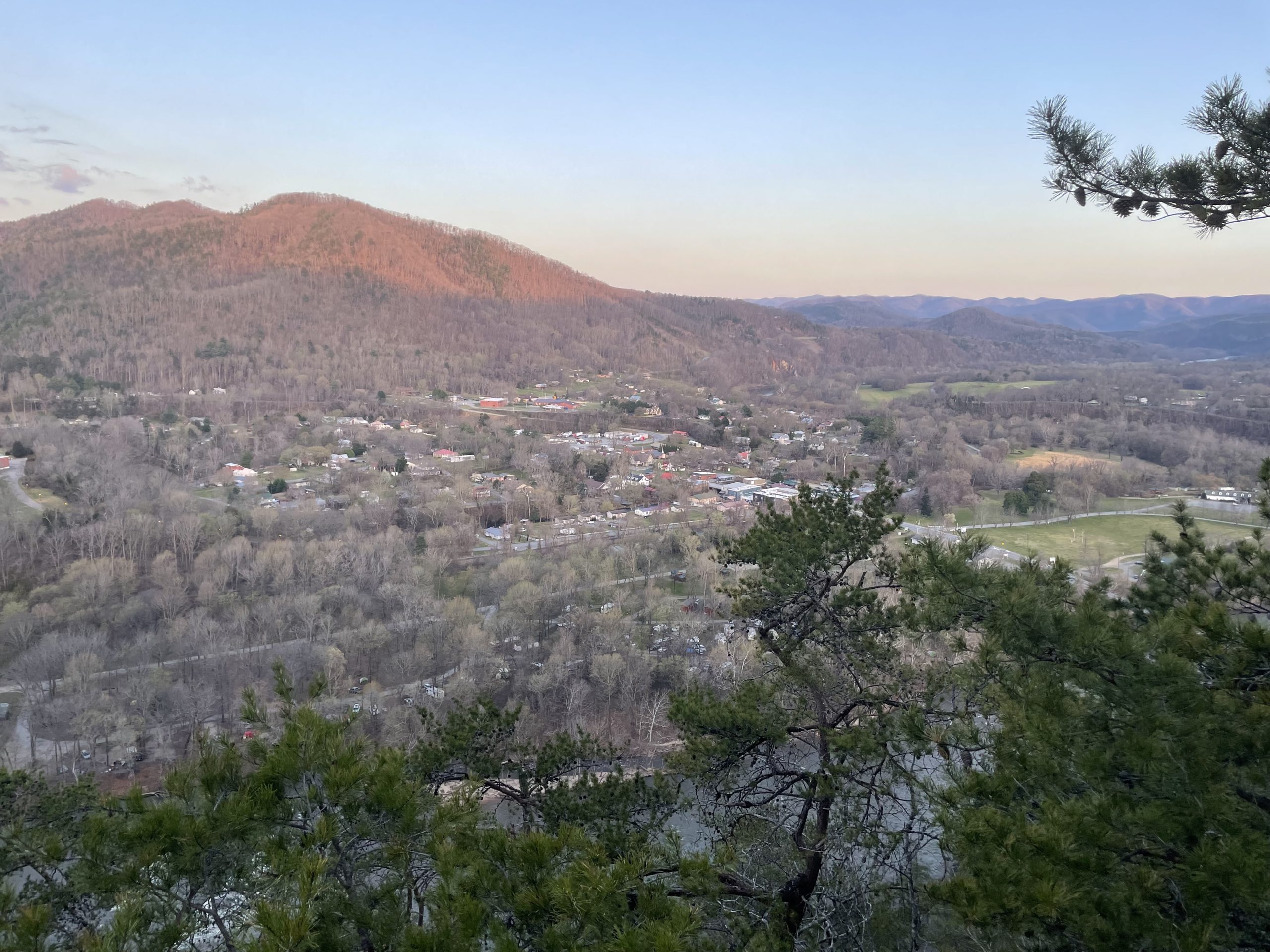 My dawn view of Hot Springs from Lovers Leap.

I left Hot Springs at 6:45 a.m. The trail winds along the French Broad River before jumping up to ‘Lovers Leap’, where I got a great view of town at sunrise. Pantless and Ibex caught up with me eight miles in, up on the main ridge at the Rich Mountain Fire Tower, and we walked together for the rest of the day. The trail was surprisingly smooth, so we decided to push past the next shelter to a campsite by a spring, making 22 miles for the day. 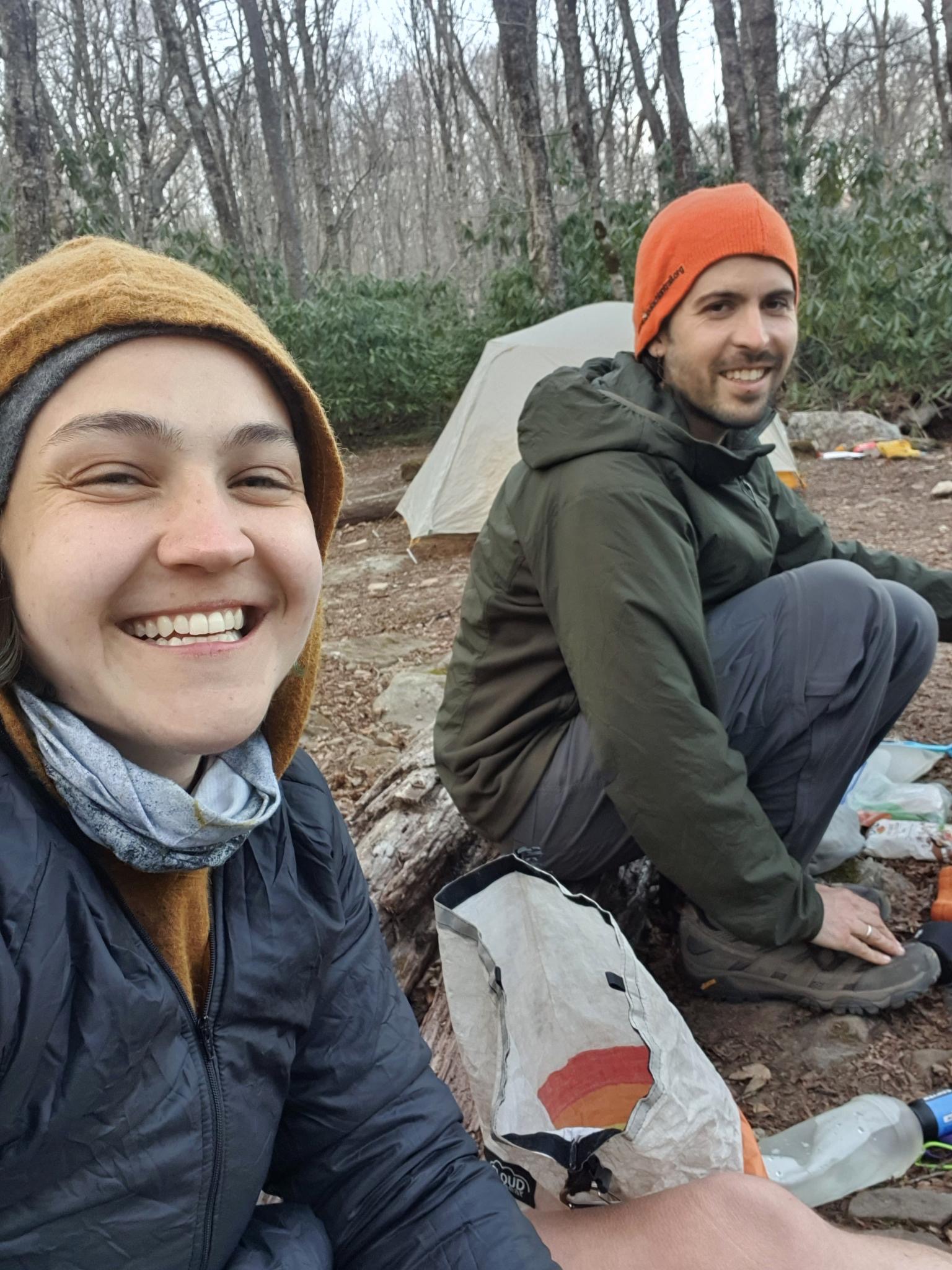 Hanging out at camp. Photo by Pantless.

I slept long and sound after that fast-paced day, so Ibex packed up first in the morning and I started out with Pantless around sunrise.   We walked together for just about two miles, to a windy ridgetop called Firescald Knob with a bird’s-eye view down the Tennessee Valley. I decided to take one of my signature long breakfast breaks there, while Pantless pressed on. By the time I left about 40 minutes later, I was very much on my own, and we were spaced out like this for most of the rest of the day. I asked a few people I came across if they’d seen them ahead, and the answer was always “a while ago — she was really booking it.” So I made it a goal to catch up by the lunch spot, which we’d discussed being on a mountaintop 15 miles in.

This was not easy. I do my long miles by walking at a moderate pace for a very long time, and sprinting isn’t usually my thing. But this time I went all in, running down gaps and charging up the other side till I was out of breath. I only stopped once or twice for water, and once to document my summit of Big Butt (you should see the comments on FarOut). Someone had left some beer in a stream as trail magic, so I grabbed one and stuffed it in my pack to have at the top. 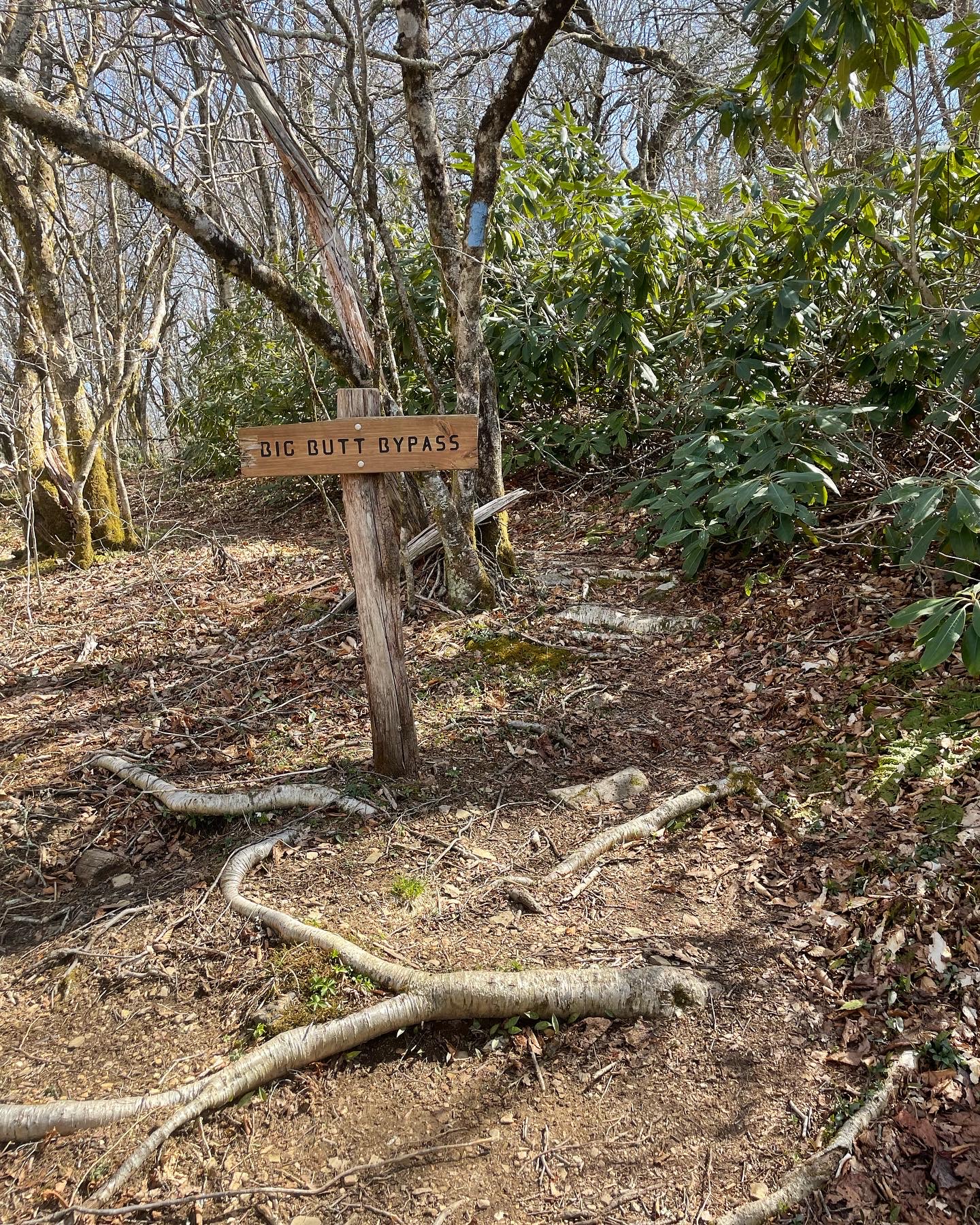 I have a feeling there are a lot of pics of this sign floating around the internet!

By the time I summited Dividing Mountain, I was out of breath, sore all over, and convinced that Pantless and Ibex had moved on without me. But there they were sitting on a log next to the trail, just about to pack up. They swear they didn’t wait for me, but I think they just said that to make me feel better. I was ready for a nice long break at that point, so I stretched out and cooked lunch while everyone I’d blown past on my way up the hill passed by.

I wasn’t sure I wanted to go as far as the other two that night — they’d discussed camping on the far side of another deep gap. So I went a little way past the next shelter, just before the gap, and 26.3 miles from Uncle Johnny’s, and thought of stopping there. When a blue-headed vireo appeared and chirped at me as a ray of sunlight broke through the clouds, I felt like the place was inviting me in and decided to stay the night. I’d get up early and do my first ‘marathon’ the next day.

Day 3: Marathon in the rain

I knew that if I wanted to walk 26 miles without hurting myself, I’d have to pace myself, so I didn’t try to catch up with the others on the last day. They’d camped four miles ahead, so had at least an hour’s start on me. I set an alarm for 4:10 and was on the trail by 5:30, watching the constellations turn overhead while I walked down to I-26 and back up again. At the open spot where Pantless and Ibex had camped the night before, I stopped to eat at sunrise, while they did the same at Big Bald four miles ahead. 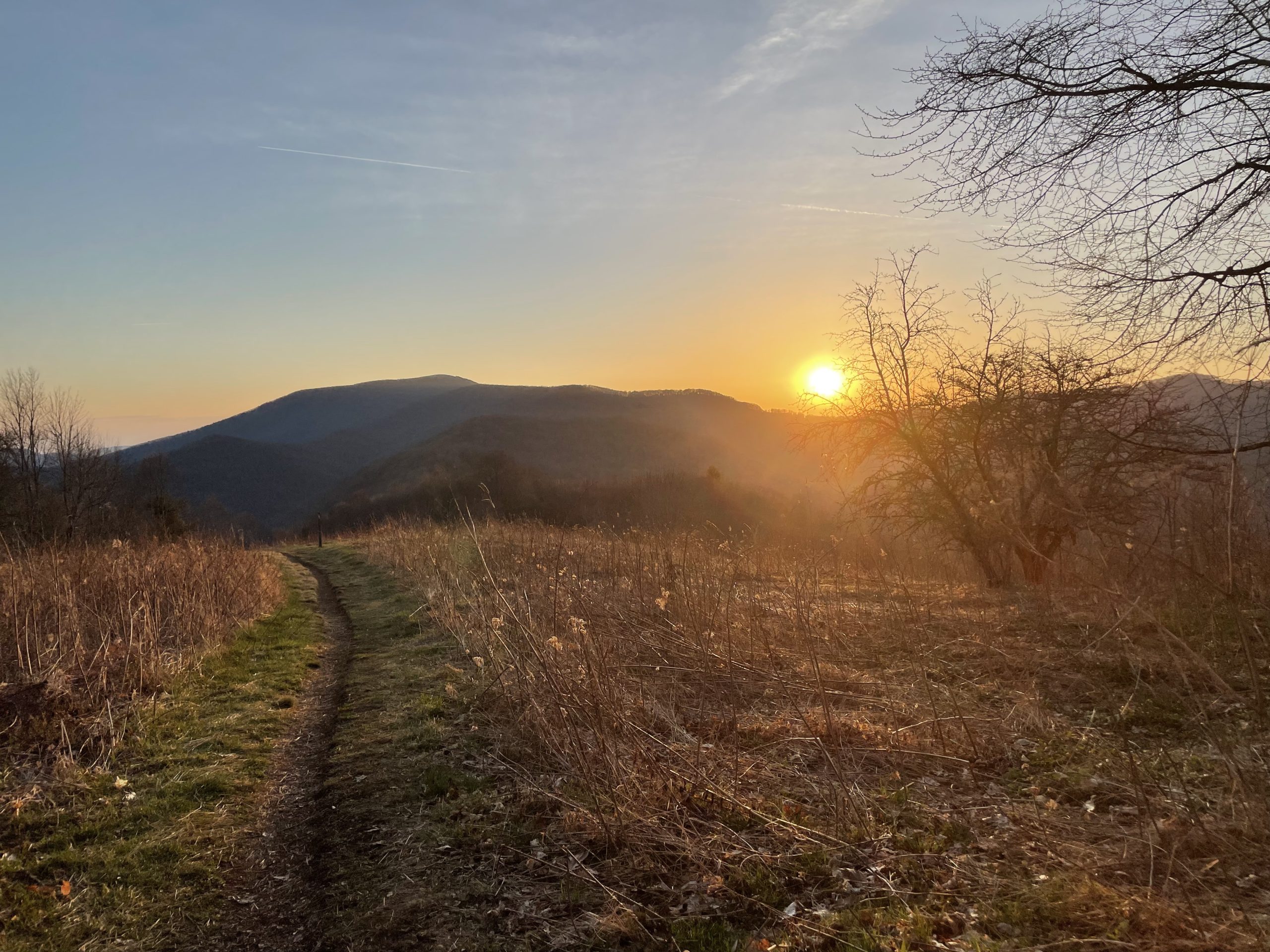 Breakfast at sunrise is one of my favorite parts of trail life.

The 1,100-foot climb up Big Bald was steep, and by the time I got there, it was 10 a.m. and beginning to cloud over. The hazy, multicolored views of distant ridges were remarkable, but I didn’t stop to admire them for long. I still had 18 miles to walk, and it was going to rain. 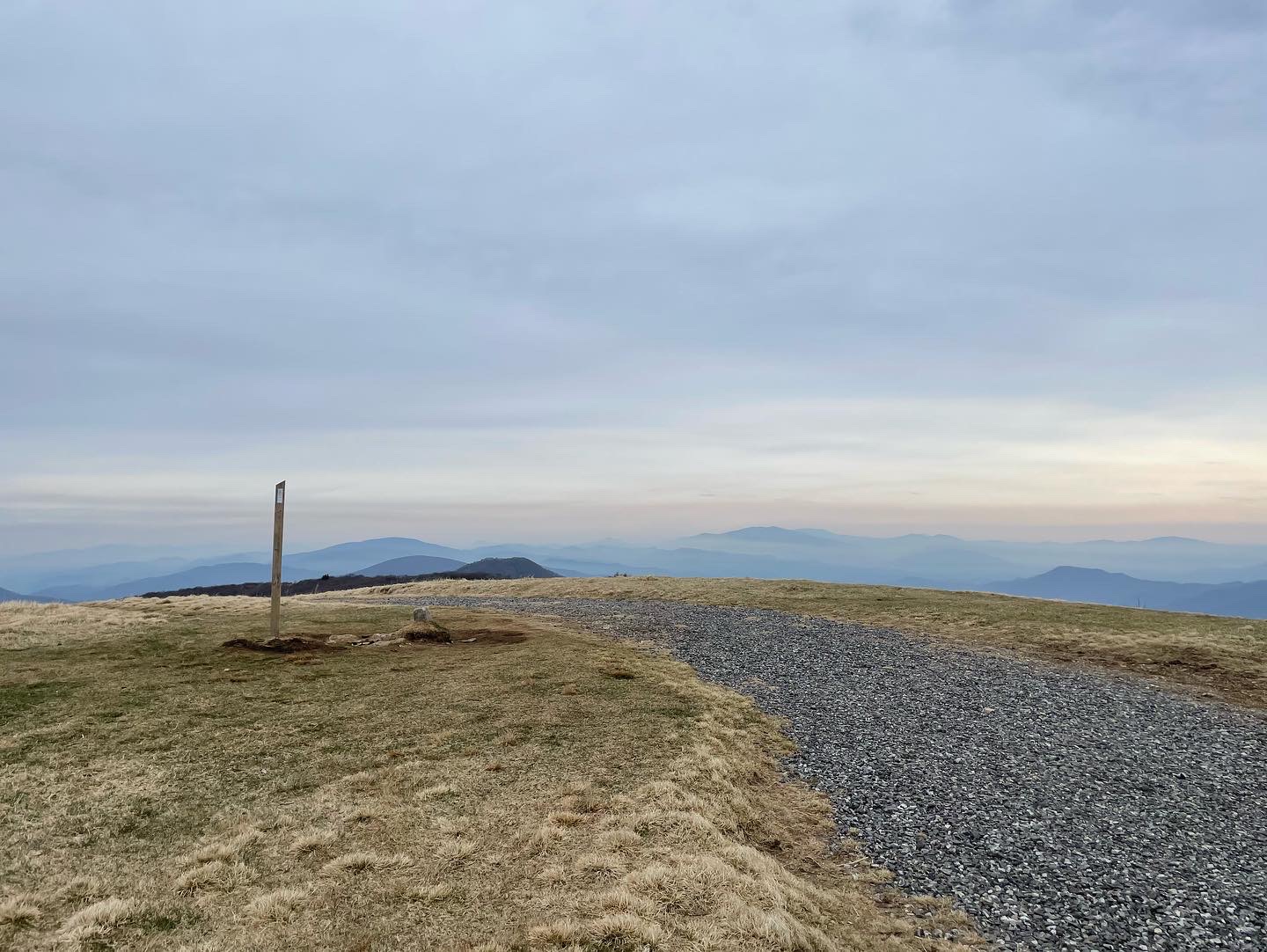 The view from Big Bald

I’d started early from a spot just past a shelter, so I didn’t see anyone on the trail for many hours. Then at noon, I ran into some trail magic at Allen Gap, where US Route 19 cuts through the mountains. A guy named Yukon Raspu-ton (yes, he looks just like Rasputin) was camped out giving away honey buns and beers. As we stood there talking about the rain, it promptly started to pour. I pulled on my poncho and started up the hill, with a brief detour to get some pizza from Punchline from Raleigh, who was setting up along the trail to support his niece Nicole along her hike. She was coming from the shelter, and also trying for a marathon day.

The woods smell wonderful in the rain, and the mosses and lichens come to life, but otherwise it’s pretty miserable. I trudged uphill for 5 miles in a downpour, and stopped to dry off at the No Business Knob shelter. There were some folks there discussing this year’s creepy hiker, a guy named Ice who started in February and was supposedly arrested and ‘went off-trail’ after some kind of sexual assault. Apparently he’s back with a different name somewhere up north, but everyone’s watching out for him and no one thinks he’ll last long. As they settled into their sleeping bags, I suited back up and moved on, down a trail that wound in and out of every cove as it moved slowly down towards Erwin and the Nolichucky River. 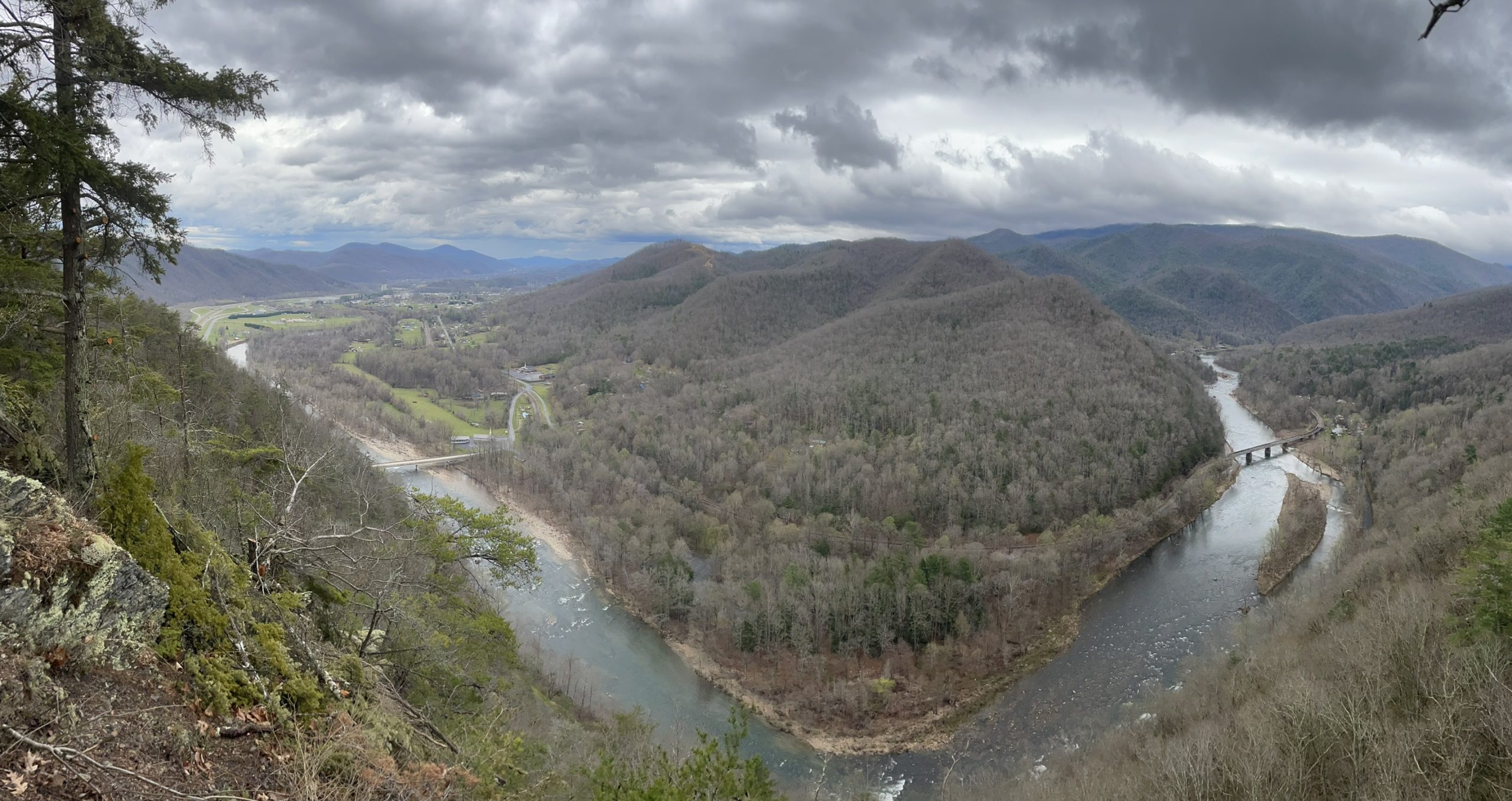 View of the Nolichucky Valley. Erwin’s on the left.

About 4 miles out of town, at 4 pm or so, the rain stopped. I was treated to a dramatic view of the Nolichucky Gorge below tattered rainclouds before the trail dived down the last thousand feet off the ridge. I walked into Uncle Johnny’s a little after 6:00, 70 miles and 60 hours after leaving Hot Springs. A few minutes later, Pantless and Ibex piled out of the hostel’s shuttle van on its way back from town. They’d come in about 3 hours before.

A Zero in Erwin

I hadn’t been planning to stick around in Erwin, but after that big push I decided it couldn’t hurt. I’ve heard too many stories of people hurting themselves by pushing too hard, and I felt like I could use some rest and calories more than anything else. So I set up my tent on the hostel lawn and settled in. 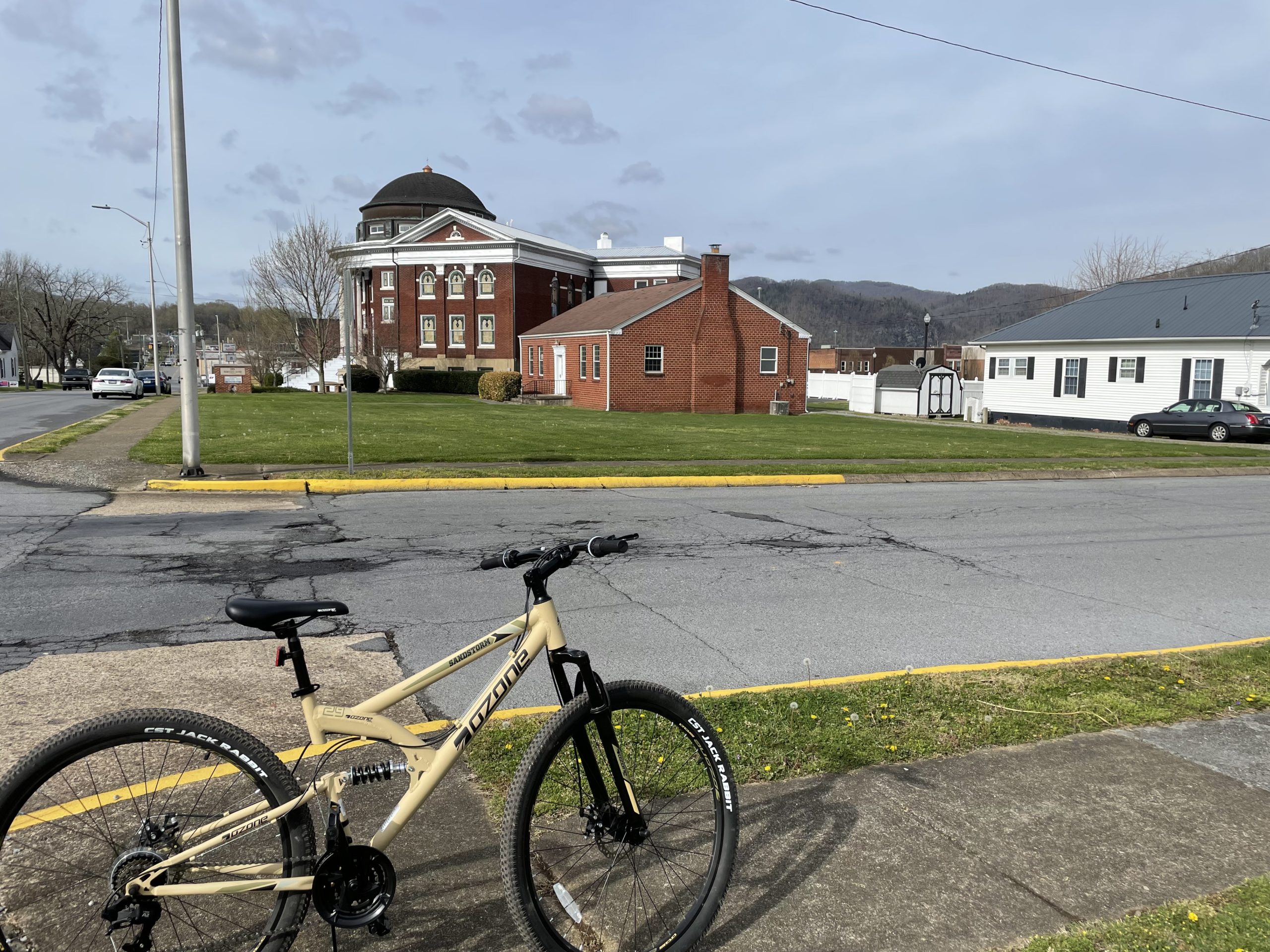 Erwin, Tennessee. This is the Bible Belt, so that’s a church, not a courthouse.

Uncle Johnny’s has loaner bikes, so in the morning I grabbed one and coasted the three miles into town. Erwin is a quiet little mountain town, with a real grocery store (a luxury on the trail) and a little cafe on the main street. I’m sitting in there now enjoying the air conditioning, while the temperature climbs towards 80 outside. Tonight it’ll storm, and then we’ll have cold again, just in time for me to catch snow showers on Roan Mountain. Ibex has already moved on, and Pantless is probably on an airplane right now going to their hiker wedding. My plan is to eat as much as I can, plan a few more weeks of supply drops, and start a relaxed climb tomorrow into the last high peaks of the South.