The Rain in Spain

Despite what you might have heard, the rain here definitely falls on the upper elevations, and on us. We started October 5th in warm and dry conditions, but the wind kicked up and it was very windy all day. Then it rained fairly hard for most of the morning. A couple of times the wind blew so furiously, it made it hard to walk straight. 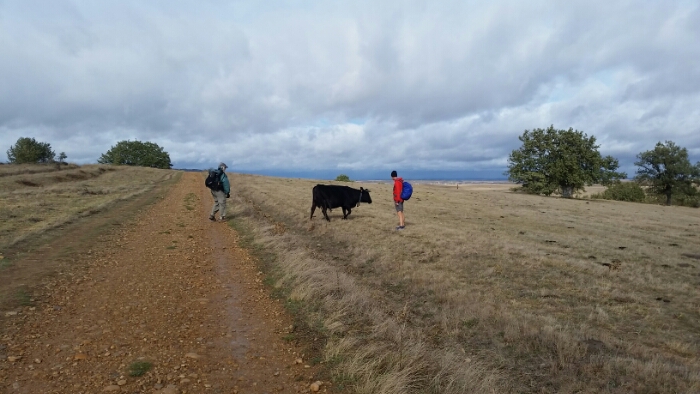 Nevertheless, we all had a good time today. It’s difficult to get too concerned about weather when you anticipate sleeping indoors. And the same wind that soaked us in the morning, dried us out in the afternoon.

We had a relatively short day again, hiking about 15 miles to stop in Cardenuela Riopico.  This was good, as my scratchy throat seems to be turning into a mild headcold.
My talents (such as they are) as a translator were in demand for this day. At the bar where we stopped for lunch an American woman was trying to get a taxi to a pharmacy and/or medical facility (foot issues). Later, in town, we met her again, it is a small world on the Camino.  Then in the Albergue (hostel) we ended up in, I was periodically pulled in to translate something. Though I am not completely fluent in Spanish, I’m happy to help, it’s a nice way to make connections.

October 6th was, unfortunately, quite the same weather, with a lot of wind and some rain.

We missed the turn to avoid the more industrial route into Burgos; partly because it came sooner than we expected, and partly because the wind was blowing so fiercely at the time that I was literally head down into it. We got to Burgos in good time, only 7 –  8 miles. In fact, arguably too early, as our chosen Albergue didn’t open until 1 pm.

I had what I thought was a clever idea: we had passed a military museum exhibit, and it occurred to me that you HAVE to check bags in museums. In contrast, tourist info offices won’t hold bags anymore due to terrorism concerns.

This plan worked great, except that the exhibit was fairly small, and thus did not beguile away all of our waiting time. No problem, this is what cafes are for in Spain.

We selected La Casa de Cubo Lerma as our Albergue. It’s by far the largest with about 150 beds on 4 floors, and the low price of 5 euros might have been a concern, but it’s very modern and well organized, very close to the impressive Cathedral of Burgos, and most pilgrims end up here. The one downside is the lack of Internet/wi-fi. 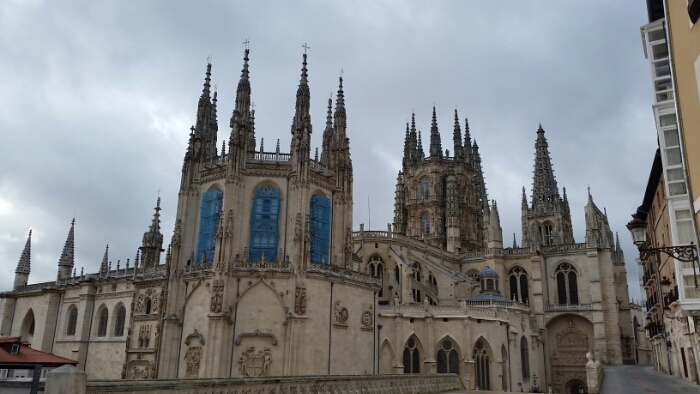 Milky and I walked about the town some, the park along the river is very nice. Some foreigners find it a little frustrating at times that shops close here for a few hours in the afternoon – at times, including us – but fortunately El Corte Ingles (big department store) doesn’t follow this custom, so I was able to replace a shirt that I lost a few days ago.

We went to see the Cathedral in the late afternoon, having heard that entry was free after 4:30. Very impressive!!