The second ‘half’ of our hike through the Shenandoahs was short (only 27 miles) and sweet. We had mostly good weather and mostly pleasant terrain. There were no scary encounters with snakes or bears or mice–a delightfully uneventful section!

We left the South Court B&B around 11:30 a.m., had lunch at the deli and then went to the Appalachian Outdoor Adventure store to get the names of drivers who might be able to take us the nine miles back to the trail head. The drivers who were recommended to us by the store clerk were “Mr. and Mrs. Catfish”.  The clerk said that the Catfishes were often available and very dependable so we left a message on their phone. They  got back to us within ten minutes to say  they could come get us in about an hour and a half! I was curious about the name “Catfish.” 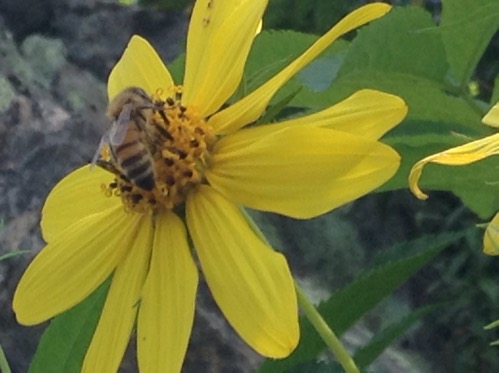 “Mr. and Mrs. Catfish” as it turns out, were actually Lisa and Frank Filipy. The Catfish name came about because they teach kids how to catch fish! Cute. They were delightful to talk with on our long  winding ride up the mountain road. We offered to pay them for gas, but they wouldn’t take our money– saying that they just enjoyed helping hikers! Thank goodness for all the ‘Catfish’ people in the world! 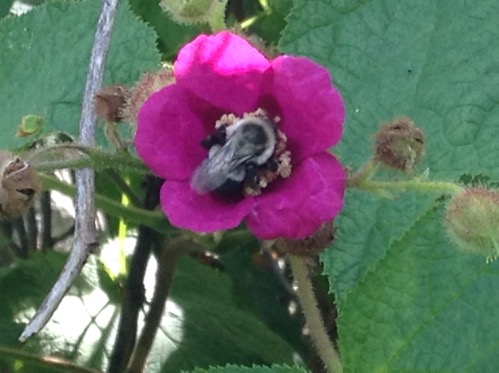 Bees on the Thimbleberries

It was really early when we arrived, like 3:00, so we passed the time eating snacks until two other hikers arrived named Kirstin and Garret who are cousins hiking the Shenandoahs from Waynesboro to Front Royal. Later, a mom and her 14 year old son arrived.

The Hierarchy of Hiker Misery

As far as I know, there weren’t any mice that ran across me last night, but I woke up numerous times thinking I heard one chewing on something. Unfortunately, it’s totally dark in the shelters at night so It’s completely useless trying to locate any culprits visually– very unnerving.

At some point during the night, the young kid on the ‘shelf’ above us woke up, turned on his headlamp and whispered frantically,  “Mom, mom, there’s a bat flying around in here!”
I was lying on the lower level of the shelter and could see the bat flying back and forth, but bats don’t scare me. Mice, on the other hand do — if they are scampering around me in the dark.

It was raining again this morning when we started out. I used to dread the rain, but,  in the heirarchy of hiker misery, hot and humid is worse than rain, much worse–unless, of course,  it’s a torrential downpour. Either way, though, you’re soaking wet.

Backfire and I reached Elkwallow Wayside hoping to spend a pleasant hour or two sitting inside a dry restaurant eating at a table and maybe getting a phone signal for wifi.

Unfortunately, this wayside was not a sit down place. We had to eat our food outside by the toilets under an overhang where we could stay dry. There were picnic tables, but they were wet. So, we sat outside in the cold on the hard cement–not exactly what we had in mind. Oh well, Backfire and I got to eat something other than trail snacks. He had a burger and I had a veggie wrap–then we shared a big order of fries and whole bag of chips,  plus a Dr. Wham! Calorie loading at its finest! 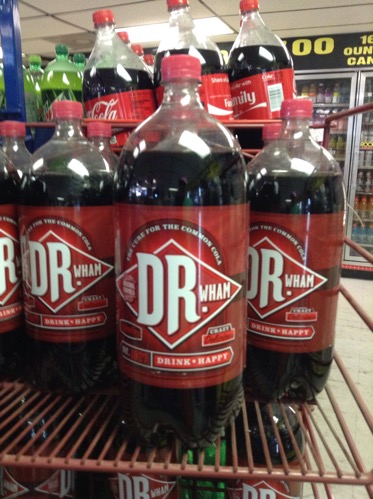 We both got really cold eating lunch out on the cement, but once we started hiking again, mostly uphill, we warmed up and eventually were able to take off our rain jackets. An hour or two into our walk this afternoon, a really thick fog rolled in and made the woods feel very eerie and quiet. I liked it! 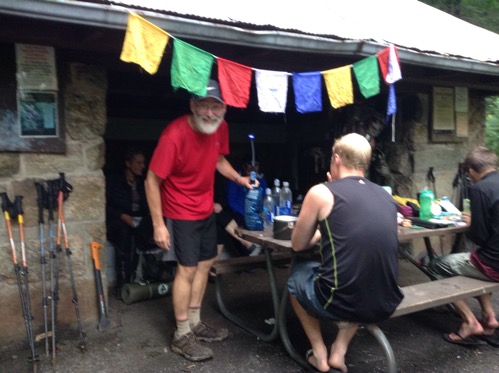 A festive atmosphere at the hut

The hut and the camping area were packed tonight with some hikers having trail names, some not. We had a ‘Moose on the Loose’ (Kirstin), Garret, Kirstin’s friend, Heather, Romeo, Indy, Mumbles and other people whose names I didn’t know. It’s the first time in a long time that there have been ‘women folk’ around instead of the usual shelter full of guys and me. 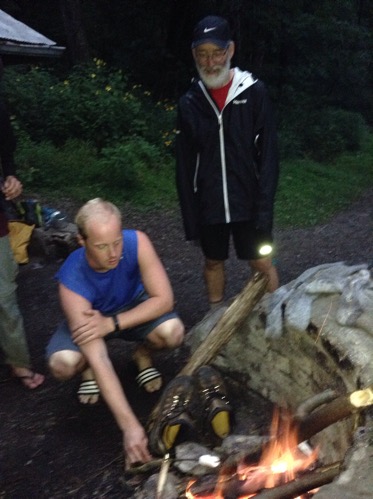 It was cool enough for a fire!

Kirstin’s  friend, Heather, who drove in to a nearby overlook to meet up with Kirstin to hike, had brought all the ingredients for making s’mores. A couple of the guys got a fire going and everyone enjoyed roasting marshmallows and squishing them between graham crackers and chocolate. Luckily, it was a cool enough evening to appreciate the heat of a fire. 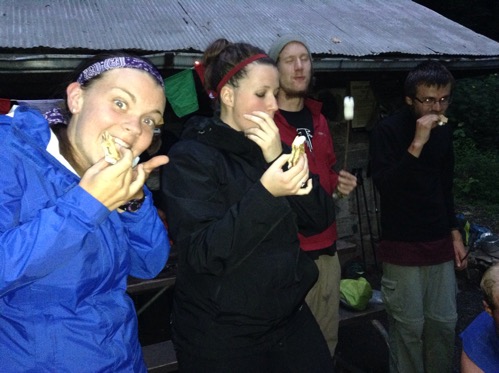 Enjoying s’mores by the fire

We slept in the shelter again because of the threat of rain and we were packed in like sardines.

My eyes popped open in the middle of the night to the sound of nibbling and chewing on something. It was quite loud–like gnawing on a package of a freeze dried meal. It doesn’t do any good for me to open my eyes when it is so dark in the shelter that I can’t even see my hand in front of my face, but I was on high alert and my eyes just automatically came unglued!

Then I got to thinking, if I could hear a mouse chewing, and it wasn’t near me, that was a good thing. It was when the mouse stopped chewing that I got nervous again.

The walk today was nearly perfect. The weather was beautiful and the trail was mostly easy. In fact, it was so chilly when we started out this morning, that I wore my fleece jacket for awhile. It was absolutely wonderful! 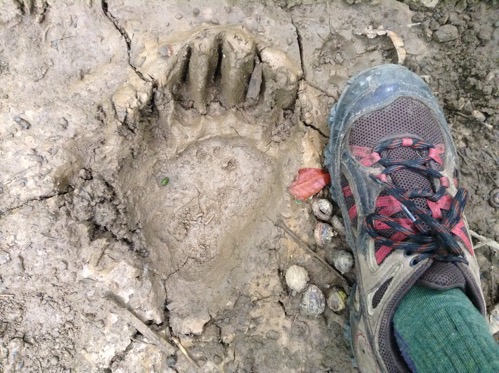 A bear print along the way!

Towards the end of day, we left the Shenandoah National Park and, for some unknown reason, the trail became exponentially worse as soon as we left the park–as in rocky and hilly! I’m glad the rocks didn’t last too long. 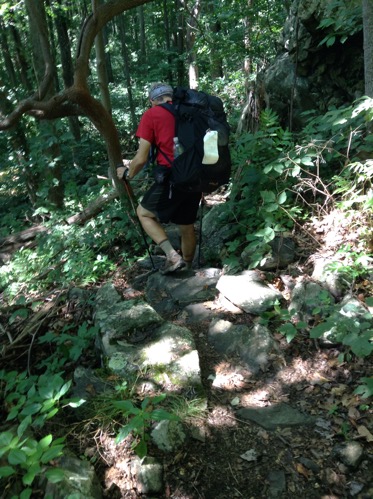 Tomorrow, we only have a few miles to hike to a road where we’ll try to hitch a ride into Front Royal, VA for a two night stay at a motel! Yay! I hope we don’t have to wait long for a ride. I hate hitchhiking! Every car that passes us by feels like rejection!

We tucked into our tent about 8:00 p.m. even though the rest of the ‘kids’ had a nice fire going like last night (minus the s’mores). The guys had started a  fire in spite of the fact that they had seen a copperhead snake in the fire pit earlier! 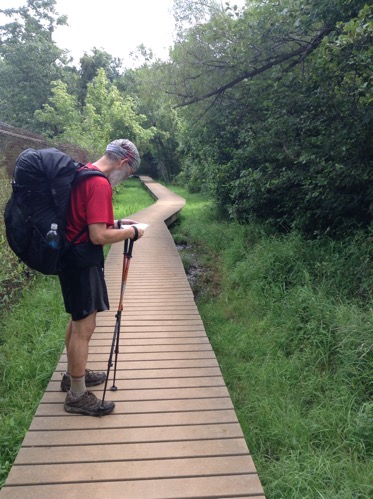 The boardwalk heading towards Front Royal

Tonight, our campmates included a young woman who had recently completed the triple crown of hiking (PCT,CDT and AT– 2011, 2012 and 2013). She and her friend were hiking the  Shenandoahs together. We also had Kirstin, Heather and Garret, Indy and Romeo–a ‘full house’ so to speak.

We went to sleep to the sound of crickets and cicadas. Much later in the evening, we enjoyed a lovely chorus of barred owls as they called back and forth to one another, “Who cooks for you? Who cooks for you”– which is what their call sounds like. I love the sound of the woods at night. It’s like music to my ears!

We woke up around six, ate a quick snack or two, packed up and left by 7:30 before anyone else was even awake. It was only three miles to the road where we hoped to catch a ride into Front Royal. Happily, we only had to hold out our thumbs for 15 minutes before a very friendly, chatty guy picked us up in his jeep. I was so relieved that we didn’t have to stand on the road for hours hitchhiking that I wanted to run up and hug the guy–but I managed to curb my enthusiasm– knowing full well how revolting I must smell.  I did shake his hand, though, and thanked him profusely!
‘Mr Friendly’ dropped us off at the Down Home Bakery where we spent a relaxing hour eating baked goods and drinking our favorite beverages. Backfire spent almost the entire hour  engaged in a pleasant conversation with the owner. I swear that man (Backfire) can talk to anyone  about anything! He has so many interests and reads so many books that he is a great conversationalist wherever he goes! 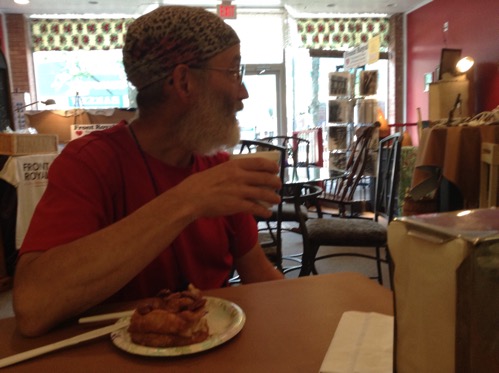 Chatting at the Down Home Bakery

On our walk to the Front Royal Super 8, we got miserably hot walking on the pavement, so we popped into a McDonald’s and had a cold drink (I wish we could do that every time we got hot on the trail!). 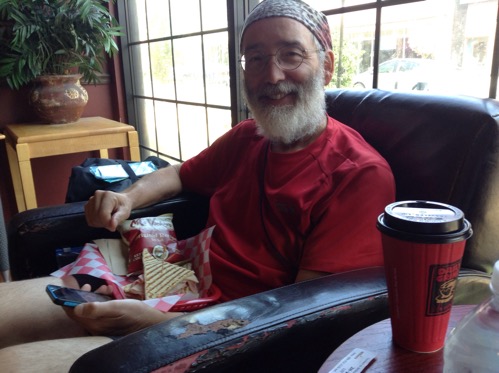 Enjoying a coffee and a sandwich at the Daily Grind

To our surprise, we ran into our first “Southbounder”. He had started his hike in Maine on June 5th and is now more than halfway done in a little over two months! Amazing! This young man has to have been doing some incredible mileage to be this far this soon!

After our stay here in Front Royal, we only have 57 more miles to Harpers Ferry and the end of our Big Adventure! I am approaching the end with mixed emotions. I am eager to be home but I know I will miss the challenge and the reward that comes from doing something difficult. 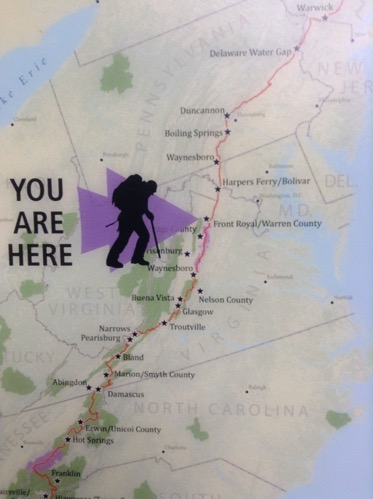