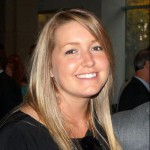 I’m going to take this opportunity to revise one of my thoughts from my last post. I was unsure whether Verizon or AT&T was a better carrier in the southern states on the Trail. Hands down Verizon is, hence the lag between posts. But I digress, let’s talk about the Smokies.

I entered Great Smoky National Park on April 1st after staying the night at the “Hilton Fontana” shelter which has an actual toilet and showers, and an amazing view that looks down on the water. 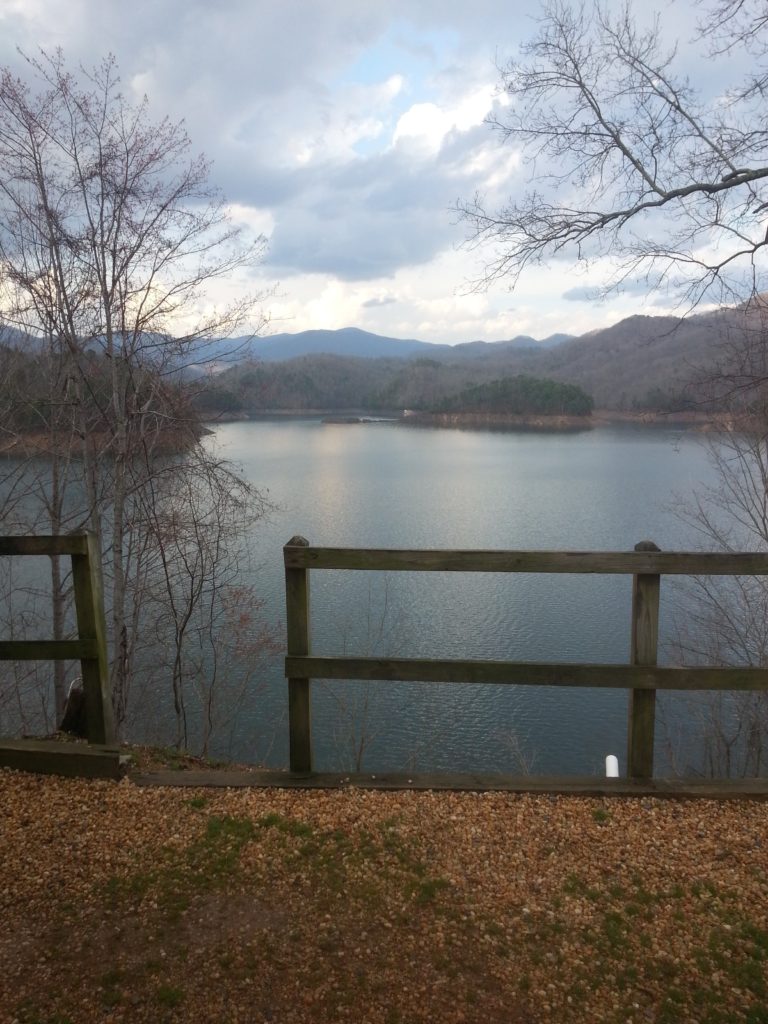 The evening before I started, my awesome hiking partners Eastside and Spitfire had to head home because the park is dog-ist and Spitfire happens to have four legs. We had a lot of fun on the Trail together and now I had to figure out a new routine and see how I was going to do on the Trail on my own. I guess you’re never really alone on the AT though, there are always people around especially so early on and the Smokies is a super popular place to hike. It did give me the opportunity to set my own pace though.

The Smokies have a somewhat notorious reputation for being pretty rough, which I found was completely unjustified. The terrain was nothing that hadn’t been tackled before and once you get up the ascent from Fontana you stay up on the ridges most of the time.

I would say the most challenging part of the Smokies (at least during the first week in April) was the weather. It is very unpredictable. The night I stayed in the Fontana Shelter there was a 10 minute freak thunderstorm that produced some hail as if to say “hope you’re ready for this asshole.”

The first day out was pretty great weather, so great in fact that these biting gnats were out in droves enjoying their day. I had to give some serious consideration to whether stopping for a snack or filling up my water at the stream was worth the inevitable swarm waiting for me. The second day was crazy windy, I’m talking damn near gale force status, and since the days climb was on mostly exposed ridges, it got a bit intense at times. The following day was quite nice until the evening when there was a pretty gnarly thunderstorm as I was tenting on one of the peaks with a big group of other thru-hikers. The next morning I woke up and the outside of my tent was frozen and so was my food bag that had been out hanging on the bear cables. Throughout the day there was a big temperature change whether we were walking along the northface of the ridge where it was icy, windy and cold or on the other side of the ridge where it was green, wet and much warmer so it was pretty hard to get comfortable.

At one point I accidently took a turn to one of the scenic points called Charlies Bunion which is already somewhat sketchy on a fair weather day and I kept looking over the drop off of the Trail straight down this mountain thinking (MOM DON’T READ THIS) “my poor mother’s never gonna find my body out here.” I made it around though and saw this lovely sign as I got back onto the actual Trail: 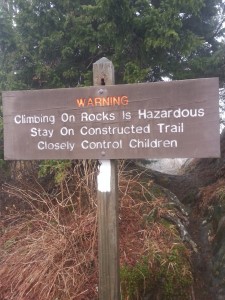 So that was the weather schenanigans that went on in the Smokies. The other big piece of the Smokies experience is the permit system which I still don’t fully understand, but here’s my interpretation. Thru-hikers can register for their $20 permit for up to a month before they enter the park. After entering the park they then have 8 days to get through. Then we have day hikers which must also obtain a permit, but they apparently have to make “reservations” aka identifying which shelters they will stay at during their time in the park. By shelters of course I’m only talking about a three-sided wooden and stone structure sometimes with a fireplace and tarp hung along the front to block the wind. Nothing extravagant, they are nice to stay in when you’re up at the higher elevations because they are much warmer and you’re somewhat out of the elements. Anyone who arrives to a shelter and it’s not full must stay in the shelter, you’re not permitted to stealth camp in your tent like other places along the Trail. However day hikers have precedent over the thru-hikers when it comes to staying in the shelters, there is only a limited number of spots in each shelter for thru-hikers.

So here’s an example scenario I ran into one evening, the thunderstorm evening as a matter of fact. I’m one of the last people to get to the shelter, get my sleeping pad and sleeping bag all set up have cooked dinner and are winding down for the evening (average hiker bedtime is about 8pm or whenever the sun sets). Around 7:30pm a group of six or so day hikers come to the shelter and so the six of us that arrived to the shelter had to get all of our stuff and go set up our tents in the rain. It made everyone feel kind of crappy, setting up your tent in the rain is no fun, but you felt bad for the day hikers who I’m sure didn’t want to seem like jerks for taking the shelter spots.

What I’m getting at here is the permit system could use some work, but there is a very cool thing that came out of it all. I prefer to tent camp so before the Smokies I never stayed at the shelters. The shelters are where you really get to spend some quality time with your fellow hikers though and start to create some lasting bonds with people on the Trial. There are many people I met in the Smokies that I spend a lot of time with on the Trail and that I’m certain I with keep in touch with after we complete our hikes.

Overall the Smokies are a beautiful place and the crazy weather only makes it more exciting. The people you meet are incredible and the views are indescribable. 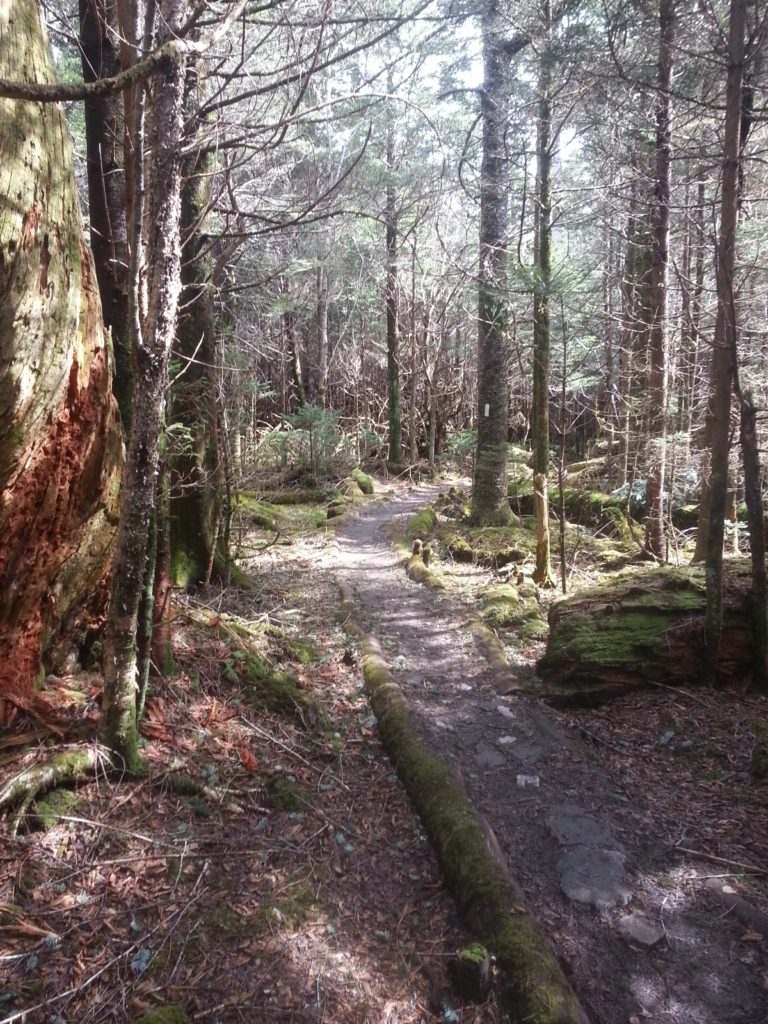 After the Smokies, you most certainly will see some of your newly made friends when you arrive in Hot Springs and the adventure continues!

Well hey there. My name is Markie and I'm from Indianapolis. I love travelling and being outdoors. My favorite outdoor activities are hiking/camping/backpacking, running, mountain biking, and longboarding. When I'm not doing those things, I occupy my time hanging out with my favorite people while usually consuming copious amounts of booze. I've done the whole school thing (B.S., M.P.A) and presently have an awesome job, but I've decided it's the right time (and needless to say, I'm totally stoked) to join the class of 2015 AT thru-hikers! I have so many reasons for doing this, but mainly it's because time flies, and I fully intend on living the f*ck outta some life!