The Top Footwear on the Appalachian Trail: 2016 Thru-Hiker Survey

This is the third year in a row I have surveyed hikers about their footwear, and for the third time, it seems be the trickiest gear selection. Just take a look at some of the open-ended comments hikers provided:

“I loved real boots.” “If I did it over, I would do the whole trail in Chacos.” “Brooks Cascadias suck.” “Although Brooks Cascadias fit like a glove and I never got a blister, they wore out too quickly.” “I have a love-hate relationship with the XA Pros.” “Hated XA Pro 3D’s.”

Not one of the footwear types, brands, or models that was popular in our survey was optimal for everyone. Even when hikers rated high satisfaction with their shoes, they usually had some complaint or another.

As a former thru-hiker, I’m just going to tell y’all like it is.

No shoe will feel perfect because you are dodging rocks and roots every day for months, with 35 pounds of ramen on your back.

Your feet are going to hurt EVERY DAY, no matter what you do.

No matter your insoles, your socks, or your shoes, you will wake up most mornings with excruciating pain. You will hobble to the privy every morning, and hopefully, by the time you hobble back, the pain will be a dull throb that you can ignore.

No shoe will feel perfect because you are giving your feet hell every day for months.

For details on the demographics of the sample, check out my survey overview post. I’ll go ahead and mention that most of the hikers in the sample were northbound thru-hikers, and the average miles walked per day was 16. 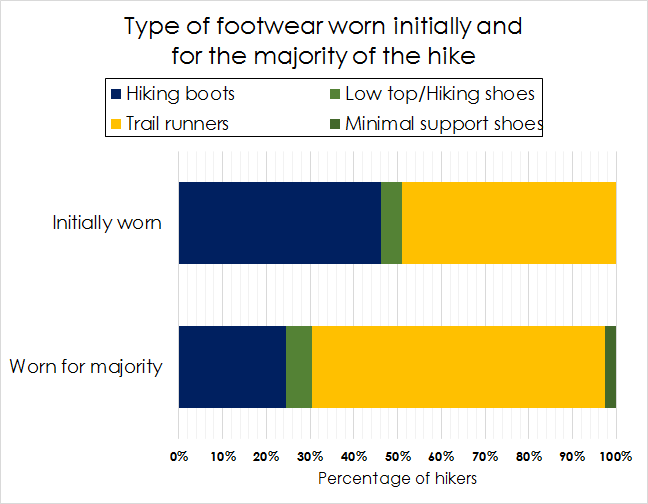 In our predominantly northbound sample, about half of hikers started with trail runners and half with hiking boots, but a third of hikers switched from boots to wearing trail runners for the majority of the hike. Note that a minority of backpackers wore hiking shoes at the start and throughout, while a few wore minimalist footwear by the end.

However, hikers were no more or less satisfied with the different types of footwear when it came to the type they ultimately used.2

The implication seems to be that many hikers start with heavier, sturdier hiking boots, but change to trail runners or hiking shoes that they are more satisfied with.

Based on the data from 2014 and 2015, it was already clear that hikers tend to switch from hiking boots to trail runners or more lightweight shoes, but we weren’t sure why. It wasn’t clear whether hikers were switching seasonally, or if lighter weight shoes were preferred for other reasons. 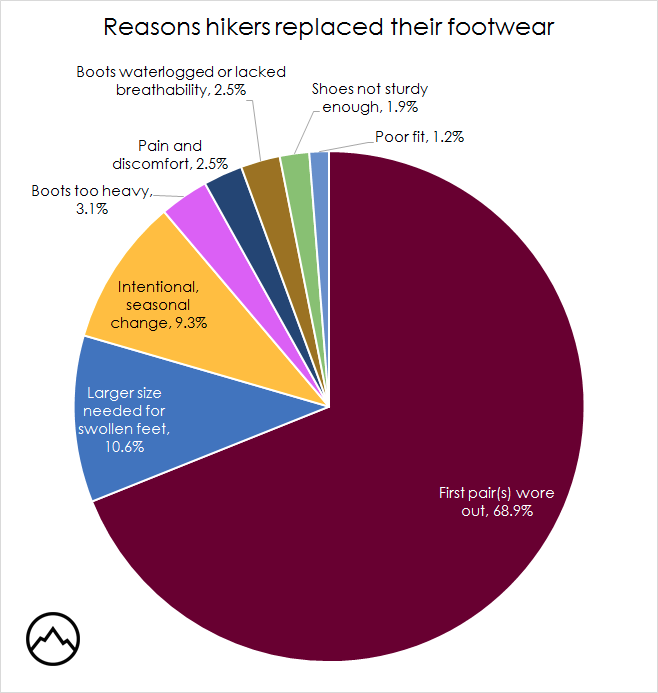 As you can see in the pie chart, the majority hikers said they replaced their shoes purely because of wear and tear. In fact, on average, thru-hikers went through 3 pairs of shoes.

However, those who switched to a different type had varied reasons for doing this. Some made intentional, seasonal changes between boots and more flexible, lightweight shoes. A few said they changed types because their boots were too heavy, while a few changed to something more sturdy.

I also looked at sheer number of pairs of shoes hikers went through, not just type of footwear they used or switched to. Unsurprisingly, the further hikers walked, the more pairs of shoes they went through. When controlling for distance hiked, women replaced their shoes more frequently than men, and less supportive shoes had to be replaced more frequently.4 Plenty of women only wore 2-3 pairs, but most of the hikers who went through 4 or 5 pairs were women. It isn’t clear why this is the case, but women planning thru-hikes may want to plan for more replacements.

For hikers making intentional seasonal changes between footwear types, it will be important to budget for multiple pairs. For hikers who are confident in sticking with one type of shoe the whole way, look into the warranty/replacement policy for that brand, because most outdoor brands will replace them for free if you purchased the shoes within the year. 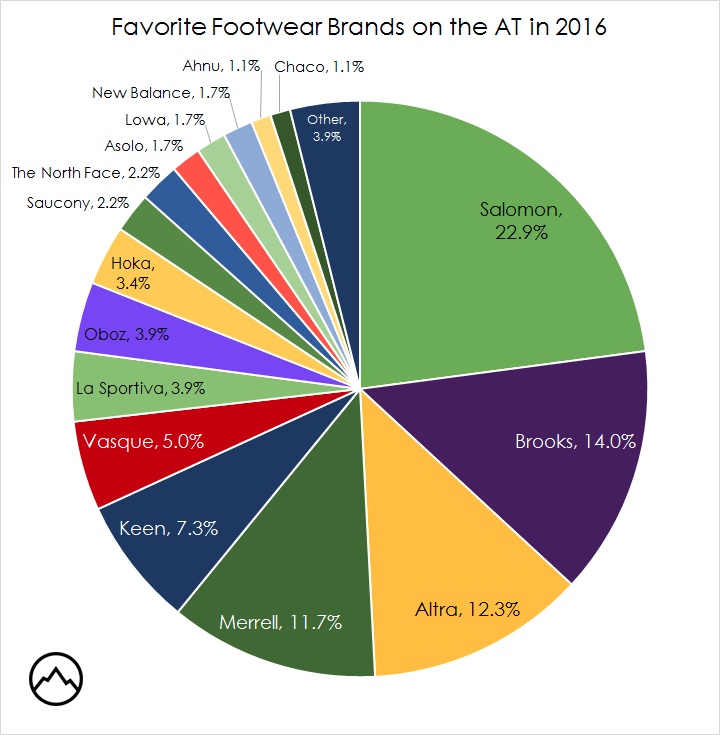 As in years past, Salomon, Brooks, and Merrell were among the most popular footwear brands of AT long-distance hikers. Salomon was the top brand, as before, but Altra entered the running, from being worn by less than 4 percent of hikers last year, to over 12 percent this year. 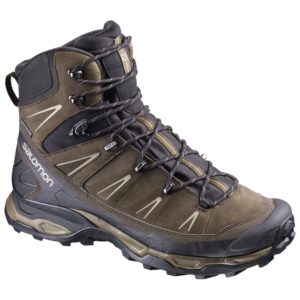 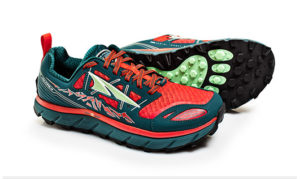 For the first time, we also asked hikers about their preferred sock brand. 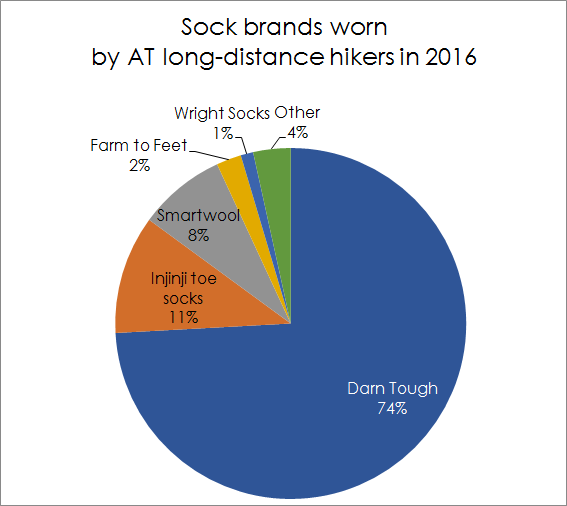 By far the most popular brand was Darn Tough, which is known for its lifetime warranty. They will replace any pair of socks for free, no matter how old and worn out, if you just mail the pair back to them. I’ve heard that Smartwool, the third most popular brand, also has this policy, but that they don’t publicize it as much. Injinji toe socks also had a following as the second most popular brand. Although only worn by 2 percent of hikers, I will also give a shout-out to Farm to Feet, because of their efforts to use ethically-sourced, American materials and manufacturing.

Most hikers didn’t recall the model of their socks, and likely went through many pairs, so I didn’t report on specific sock models.

CONGRATULATIONS and many thanks to the hikers who participated in the survey. Thanks also to Zach Davis for his assistance in creating the survey and getting the word out.

So far this year, I’ve written a general overview of long-distance hikers on the AT in 2016, as well as a post on backpacks. Up next will be sleeping bags, sleeping pads, shelter systems, and a post on stoves, food, water, and resupply.