The Trail Provides, Part Two – Hiking in a Thunderstorm

Setting out for hikes wasn’t always a pleasant experience for me.  When I first started hiking I would become anxious on the drive north, and as I approached the trailhead, my adrenaline would start pumping.  Feelings of self-doubt would roll through me and even though I had dozens of hikes under my belt, I would begin to question if I was strong enough to summit.  I still struggle with anxiety, even after hundreds of miles on trail, but the act of hiking has become much more routine now.  Conversely, there are still some days when I set lofty goals for myself, and in doing so, the self-doubt begins to kick in again.

Due to the fact that I had opted to skip summiting Mount Abraham on my first day of hiking, I had to alter my plans for the remainder of my trip.  I had hoped to summit specific mountains while in the Rangeley Lakes region of Maine and to accomplish this feat, I determined that I would need to do two separate hikes on day two of my trip.  Mileage would be around 15 for the day, and elevation would be over 5,000 feet, but I had done a similar itinerary in New Hampshire before so I was confident that I could do it again.

In the morning of day two, I planned on climbing Mount Abraham as fast as possible. Then I would drive to the Saddlebacks and summit them via the ski trail to cut mileage and still meet my goals for the day.  Everything was going according to plan when I left the hotel before 6 a.m.  However, locating the trailhead for Mount Abraham proved more difficult than I had hoped and I didn’t end up hitting the actual trail until after 7 a.m.  I figured I could make up the lost time by trail running on my descent, and I set out into the woods to climb Abraham.  Once again, the rrail provided me with the motivation I needed to descend the mountain in record time. 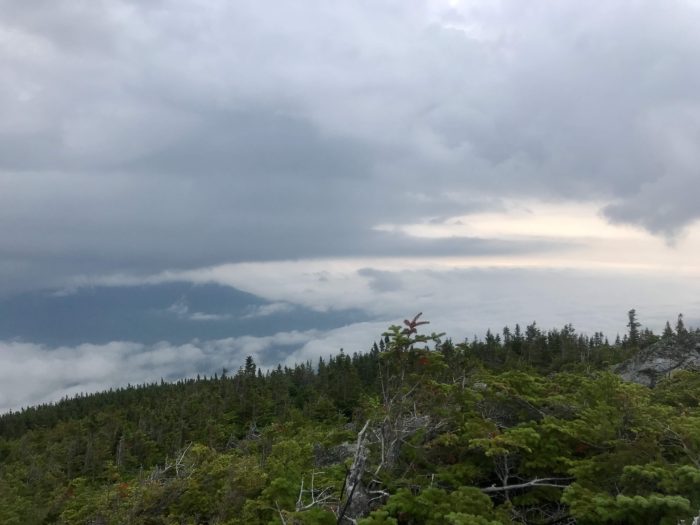 The clouds beginning to roll in.

Testing My Limits or Bad Choices – Hiking in a Thunderstorm

By no means am I condoning hiking in bad weather, and every individual needs to assess their own skill set and willingness to take risks prior to setting out on a hike. AKA – Don’t do what I did.

The first few miles of the trail leading to the summit of Mount Abraham climb gradually.  Walking through deciduous forest along a well-marked trail meant I could go about two miles per hour.  Once I reached the more strenuous climbing, I slowed down to about 1.5 miles per hour.  The skies were overcast for the majority of the morning and the cloud cover offered comfortable hiking conditions.  In less than two hours, I had covered the majority of the hike, and hardly noticed or cared what the weather was doing above treeline.  After hiking for two winters in the Whites, there was nothing summer hiking could throw at me that I wasn’t prepared for – or so I thought.

As I broke treeline, I glanced over at the AT and saw the storm clouds rolling in.  I said a silent prayer for the thru-hikers on trail, hoped they were safe below treeline, and continued my ascent.  Thunder rolled through the forest and I started to feel slightly nervous about being above treeline, but I knew I was close to the summit and really wanted to reach the top.  The trail continued to rise into the clouds along the exposed, rock-covered alpine zone, and every couple of minutes I would glance toward the north at the ever-darkening clouds on the AT.  The winds began to push the clouds farther south and the roll of thunder started to become more and more consistent; but the draw of the summit was so strong that I refused to turn around. 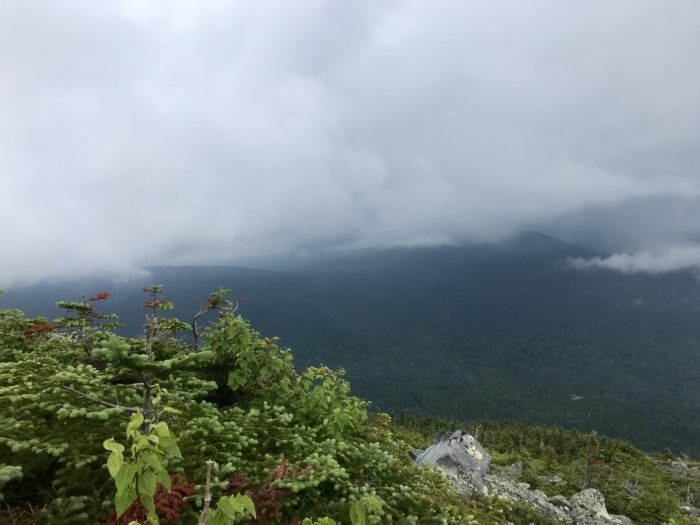 Looking toward the Appalachian Trail.

In my mind, I knew I was taking a pretty serious risk.  The warnings about some of the worst things to do as a hiker echoed in my head. “Don’t hike in a thunderstorm,” and, “If you catch yourself above treeline when bad weather rolls in, head for the cover of trees” kept repeating over and over like a bad record.  I continued to do the exact opposite of what every fiber of my being was telling me to do.  I would ask myself if it was worth serious injury or death simply to make it to the top of some mountain that happened to be on a list, and proceed to take another step toward the top of said mountain.  “You’re using metal trekking poles in a thunderstorm and you’re on one of the highest points for miles” ran through my mind, but I kept going.

Finally, after a half mile of rock scrambling, I saw the summit marker.  I dropped my pack in order to move faster as fat raindrops starting splashing off my head, and ran as fast as I could for the summit.  I snapped a quick photo of myself at the top as the clouds continued to move in and weighed my options.  There is a crude shelter built into the side of the mountain directly below the summit marker.  I could huddle inside the shelter and try to wait out the thunderstorm that was moving directly overhead, or I could take my chances and run the half mile down to the treeline as fast as I could.  Needless to say, I chose the more risky option and ran for the trees. 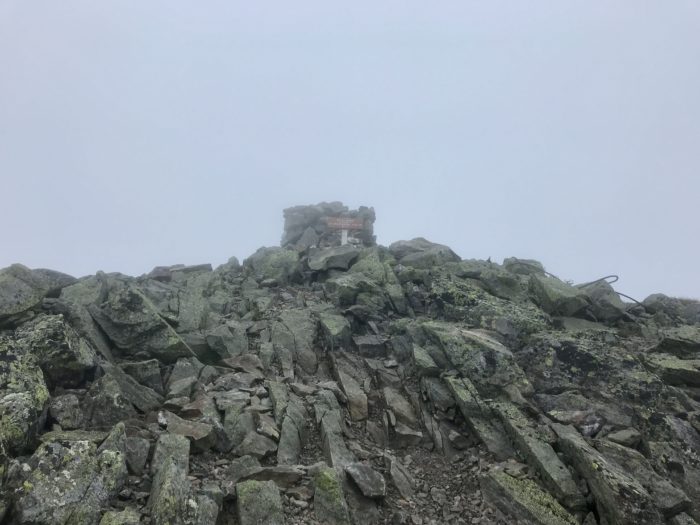 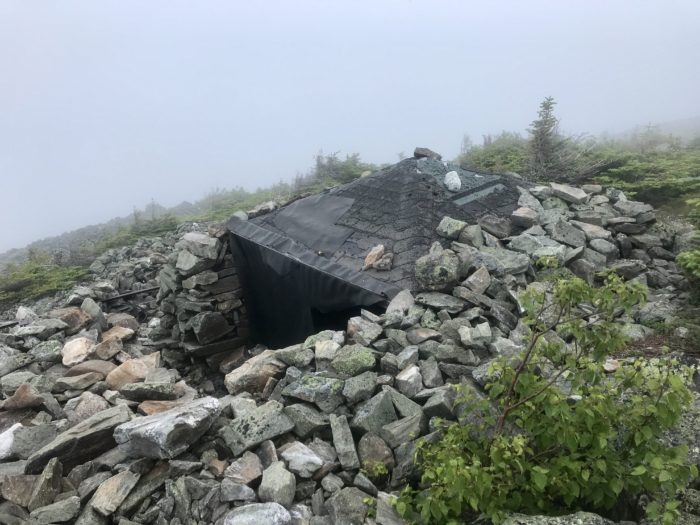 The winds continued to pick up and I was no longer looking at the clouds as they rolled into the mountains. I was in them.  Rain began to fall more steadily as I whisked my pack off the ground and began to rock hop at breakneck speed toward treeline.  Every few minutes the thunder would roll through the clouds and I would go faster.  If I could just make it to treeline I knew I’d be safe.  I found myself crouching lower toward the ground to make myself a smaller target.  I even contemplated whether it would be better to just get rid of my trekking poles altogether since they were metal.

It wasn’t until I could see the trees directly in front of me that I realized just how much of a risk I had taken.  I had put myself in one of the most dangerous, if not the most dangerous, situations of my hiking career, simply to say I stood on top of some mountain.  As I bolted into the cover of treeline the rain began to fall in earnest and I thanked God that I wasn’t above treeline anymore.  I continued to go quickly down the mountain and knew I wasn’t entirely safe yet, but felt somewhat more protected as the storm started showing its full force.

Less than an hour later, the storm passed over and the sun started to shine again.  I emerged from the woods and walked to my car, pondering what I had just endured less than two hours prior.  I was surrounded by families on their way to go fishing and hikers strapping on their packs, headed for the woods.  I looked around and felt like I had emerged from some alternate universe into the real world.  A place that was completely unaware of the risks I had just gone through. 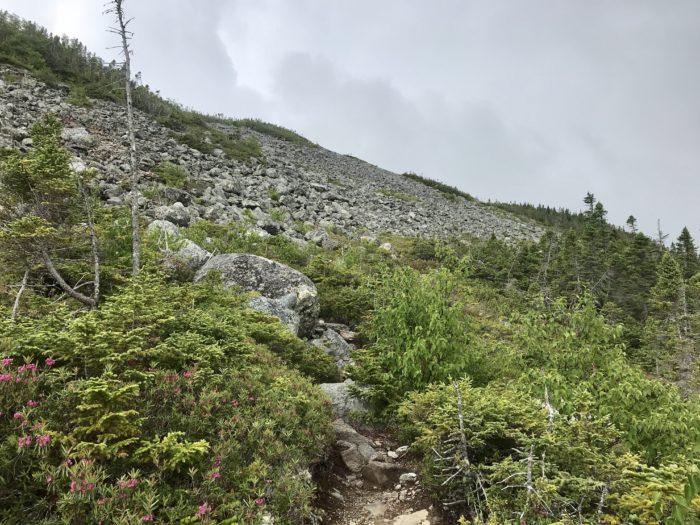 Reflecting on the First Hike of the Day

As I sped off toward my second hike of the day, I realized that I hadn’t been all that scared while in a pretty scary situation.  It seemed odd to me that this was probably the most risky situation I’d been in, but I felt much more afraid in the winter hiking in subzero temperatures, or when running out of water with miles left in my hike.  I believe that fear can be a very individual thing and is often based on past negative experiences.  Looking back at my life, I realized that I had never been taught to fear thunderstorms the way I had been taught to fear freezing to death.  While having a healthy sense of fear is necessary to keep you safe in unsafe situations, I realized that sometimes that sense of fear is unwarranted.  How much had I let fear limit me in the past and would I let fear continue to limit me in the future?