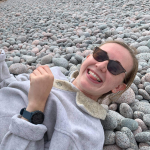 Starting the trail, I never expected to be around this many people. “SOBO” was advertised as a solitary experience, after all. I hiked through most of New England with a steady couple of people, passing others on trail here and there, but spending most of my time in a tight-knit group.

But, after a few run-in’s with other little groups, the little groups became one big group. Now, there’s always someone different to talk to, finally other women around me, and it’s generally just a whole lot of fun being with this many people.

In this post, I wanted to capture the unique essence of a bunch of people that I’ve been hiking alongside. My tramily (trail family). Throughout the easy, beautiful days through Shenandoah National Park, I asked some (this isn’t even everyone!) tramily members what song they would add to a hiking playlist.

I kept the criteria intentionally vague.

Songs ranged from upbeat tunes for climbing a mountain to quieter songs that are best listened to at camp. And I love how that captures the range of people in the tramily, as well as the range of emotions experienced throughout each day on trail.

So, here it is. And I’ve even linked the playlist on Spotify for your listening pleasure.

From the opening chords, it’s clear that the dog owner of the group recommended this song. He says that the song is the “#1 today is a good day and I’m going for a hike” type of song. And based on how much his husky, FrankE, smiles while they’re crushing miles, I’m not surprised that this is what Mountain Goat has playing in his ears. P.S. congrats to Mountain Goat and FrankE for finishing their flip flop hike!

An instrumental from the guy that’s always searching for a guitar at every hostel? No surprise there! He claims that the ideal time to listen to this song is “on a ridge, golden hour in the afternoon when you’re striding on”.

I met Shaggy (a fellow Trek blogger!) on Day 1 of my thru-hike. After a hesitant couple first days getting to know each other, it wasn’t long before we realized we’d both just graduated college, and shared political views, and both love Shakey Graves. This song in particular, Shaggy describes, is a great “pump up song”.

End of the World, by: Great Big Sea (Gravy)

Obviously the fellow Atlantic Canadian had to recommend a song from the stereotypical Newfoundland band, Great Big Sea. This sea shanty sends Gravy uphill at least twice his regular pace, so we had to get the whole tramily to download this album so they knew what was happening in this headphones.

If the Gaff Don’t Let Us Down, by: Skinny Lister (Mountain Goat)

Another sea shanty? Has to be from our UK pal in the group. This song starts off slow, just like how Mountain Goat can be a little quiet when you first meet him. But then the song turns classic sea shanty and has you wanting to bang your fist on the table to the beat. Mountain Goat told me he listened through this whole album to pick the perfect song for this playlist, and he’s definitely chosen a great one.

You Should be Dancing, by: The Bee Gees (Bears)

If you’re lucky enough to camp with Bears, you might hear her whip out her ukulele and softly sing along to the melody. One night in Shenandoah National Park, I fell asleep listening to the wind and Bears singing Fleetwood Mac (my all-time favourite band). This song, however, Bears claims has been following her around the trail, playing during a hitch hike and in at least 3 different grocery stores. An obvious choice for the playlist.

Twigs was one of the few people from this group to attempt the 4-state challenge hitting Pennsylvania, Maryland, West Virginia, and Virginia. And she was of even fewer people who actually completely it! Woohoo Twigs! She says this song in particular was motivating during her 40+ miles of hiking in one day!

I’ll Believe in Anything, by: Wolf Parade (Cheerio)

A great tune for hiking, Cheerio agrees that this song belongs on the playlist because it just feels “adventurous”. And despite how catchy this song is, he put it on pause with Gravy, Homework, and I one afternoon to get into a long conversation about loneliness on- and off-trail and how it manifests differently. Trail conversations are sometimes just about food and sometimes deeply personal, and I love the variety!

One of at least 6 other engineers in the tramily, I can relate to the need for something a little more silly, rather than serious, in life, and in music. This song is perfect for getting excited to hike. Bonus points because I remember listening to this song as dusk (and a hurricane) set in, driving towards Mount Katahdin, the first time I attempted to summit a few years ago.

T.D. started by recommending a Pearl Jam song that should just be listened to on loop. But, changed her mind and provided this recommendation instead. She says this song is for when “you’re having a hard time, but still want to be groovy”.

German club music, but not recommended by the German in our tramily. Instead, Gnarly recommends this song and I can totally picture her listening to this as she hikes after dusk, crushing big miles and arriving just after supper to camp. Maybe I’d hike faster and longer too if I listened to this more often.

Coming from the guy who carries a melodica and routinely listens to ABBA, I’ll say, this one surprised me. But, from someone who has done two 50+ mile days on the AT this year, I guess it can’t always be upbeat music all day, all the time. And he’s right, this song, which I first listened to strolling through a meadow, definitely has “good energy”.

I initially met Pineapples during a shuttle ride from the Flume Gorge Visitor Centre near Lincoln, New Hampshire. He was headed North during the first half of his flip flop. We ran into each other again here in Virginia and he added this song to the playlist. And it just so happens that French rap is one of my favourite sub-genres as well!

Even After All, by: Finley Quaye (Homework)

Homework has also been known to put on some Tchaikovsky or other classical music. He also loves to play jazz music in the hotel or hostel on zero days. No surprise then, that he recommends this song with chill vibes as the perfect song to play while the sun is setting.

Oats in the Water, by: Ben Howard (Tick Bite)

We’ve been lucky with weather this year, with relatively few cloudy and rainy days. However, for those grey moments Tick Bite, our German pal, recommends this song to pass by the hours of hiking in misty, mysterious, and melancholy weather.

Of Love and Life, by: Caamp (Photo Op)

Photo Op has more experience hiking than most of us, having also finished the PCT. And after that time on the West Coast, I can’t be surprised that he would recommend a song by Caamp, an absolute granola classic (and rightfully so). This song in particular really slows things down, and I think that could relate to the slow, soft loveliness of the AT in comparison to the stark beauty of the PCT.

Lever must have chosen this song because he’s always hiking “overnight”. I’m often in my tent before Lever gets to camp. Whether it’s because he’s doing huge miles, soaking it all in, or maybe not listening to the same upbeat tunes as his buddy Gnarly recommends, I’m still not sure. Either way, awesome song choice, and this one definitely sounds even better while in the woods at dusk.

Stolen Love, by: Josiah and the Bonnevilles (Ducky, that’s me!)

I love chill music. And I’ve been known to show friends objectively slow songs, claiming they’re “actually a banger”. I have a soft spot for songs that are relatively chill and a little folky, but then have a powerful and loud chorus that just hits right when climbing a mountain in the woods or singing in the car. And this song is a great example of that.

This song brings me all the feels and has been one of my favourites for years. I was happy to add this one to the hiking playlist. And it feels right that Big Catt (another Trek blogger!) recommended this one, because every conversation with her feels very natural, flowy, intentional, and interesting, just like listening to this song.

With an album cover as colourful as the leaves around us these days, this song is another perfect woodsy song. It seems that some of the tramily have very similar taste in music, maybe a new shared playlist should be started? Adding Swift’s song to the end, last but not least! Swift joined the tramily in Delaware Water Gap, where she began her SOBO section, and has been matching pace with us ever since — give her a freaking round of applause!

Shenandoah National Park was an incredible welcome to Virginia. Tramily family members brought generous trail magic to this enormous SOBO bubble. I enjoyed my first pumpkin spice latte at the Skyland Resort one morning. We enjoyed peaks out to the mountains around us, a tease for views to come and a welcome treat after the relatively flat miles through Pennsylvania.

The days through the park were full of switchbacks along mountains and easy climbs along the well-travelled paths. The weather began to feel like fall, with chillier mornings, a hurricane in the forecast, and crisp air. As the bubble travelled through Shenandoah National Park, each with different tunes flooding our ears, it was a happy time, enjoying Wayside breakfasts and chatting the miles away. Instead of “happy trails”, I’ll wish you happy listening!

Hey y'all! I'm Jana (she/her), a SOBO Appalachian Trail thru-hiker from New Brunswick, Canada. I grew up 4 hours from Millinocket, Maine and just graduated university. I'm a regular weekend warrior backpacker with a passion for a big scoop of PB in my morning oatmeal. I like organizing my Spotify playlists by genre and waking up before sunrise. Follow my adventure @jana__giles on Instagram!