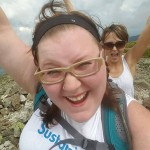 “Yeah! I’m pretty stoked about it!”

I’m sure this little snippet of conversation is one that many a thru-hiker, or soon-to-be thru-hiker has had with at least one person in their life. It’s really quite a normal reaction when you tell someone you’re willingly isolating yourself in the woods for up to 7 months, and really, the only answer you should give is that you’re completely crazy, because let’s face it, it’s true. While this question is usually asked in horror, and confusion, and while the person who is asking it, probably doesn’t really want an answer, but is just thinking to themselves how you probably won’t make it, and yes, you definitely are crazy, it really makes you stop and think.

What is it in our brains that sings to us, and encourages us to tackle such a seemly impossible task? (We all know it IS possible, because there’s quite a few people who have come before us, and succeeded)

Is it the high? I mean, let’s face it, whenever you finish a hike, no matter how long, or short, there is ALWAYS a sense of triumph when you reach a summit, and then, a sense of happiness, and satisfaction when you reach the car. Of course, that’s part of it.

But, the real answer, I believe, is different for everyone. It’s a personal decision, and usually, the reasons behind the decision are personal as well. That doesn’t mean that we aren’t going to share it with you, just be prepared for an answer a little deeper than, “It’s going to be fun!”

For me, the decision to hike the AT is for more than the adventure of the idea. It’s to prove to myself that this is a something that is real, and tangible, and life-changing.

I have always found solitude, and safety in nature. I grew up surrounded by tall trees, and the smell of the leaves on the forest floor. It’s home.

In 2013, I moved to Ohio to attend Cedarville University a vocal performance major. I got to school, and after a quick survey of the land, decided that adventure wise, school was going to be pretty boring. See, here’s the thing about Ohio, ESPECIALLY Cedarville, OH…. it’s flat. Completely flat. Oh! And, there’s corn. Like… So. Much. Corn. So, you an imagine my thoughts. I had just moved from the glorious, beautiful, mountainous MAINE! And here I was in flat, hot, cornfilled Ohio. I was slightly miserable, but shortly discovered The Indian Mounds!

An Indian Mound is just that: It’s a lump of earth. Certain Native American cultures would use these mounds as temples, burial sites, and fancy housing. Here’s a picture of the Indian Mound in Cedarville:

Well, the trail out to the Indian mound is absolutely beautiful! There is a gorgeous waterfall: 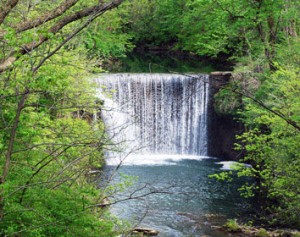 And lots of really cool side paths that can be taken. Ohio was finally starting to feel like home! Something was still wrong, though. While Cedarville had places like the Indian Mounds, it lacked one other thing: Appreciation.

After living in a state where just about everywhere you turn, there’s some sort of hill, it fascinated me that people weren’t more infatuated with these little pockets of heaven that were scattered throughout South-Western Ohio. I became desperate to learn about them, and appreciate them. I brought friends to these places, determined that they too should like nature just as much as I did, and I think that deep down inside, they were confused as to why I was so concerned with their love for these oasis. I’m sure they thought I was crazy. I was so frustrated though! Why didn’t these people see it? Why didn’t they see that these places were untouched, beautiful, healthy, calming, and awe-inspiring! Why didn’t they understand when I picked up a random piece of trash on the ground? Why didn’t they understand that doing homework out in nature was so much more fun than sitting in a stuffy practice room, or the music lounge? I was confused, but kept my thoughts to myself. And then, I realized something:

I was so in love with these small places in Ohio, how come I didn’t feel like this for MAINE? And then, my hiking fever started.

I studied, and planned, and prepared, and was determined to hike as much of Maine as possible when I returned. So, summer f 2014, I started hiking. Doing tiny mountains like Battie in Camden, and Ragged Mountain in Rockport. I was obsessed. I ached, and my lungs hated me, and I almost gave up multiple times, but I was bound and determined to appreciate my state just as much as I had appreciated those pockets on Ohio. And I did. I fell in love. And It was glorious. My final ascent in Maine before I headed back to Ohio was Cadillac in Acadia National Park. It seemed huge then. Looming. a King overlooking his kingdom. I started early, and the hike took me almost the whole day. Which is a little crazy because elevation for Cadillac is roughly 1300 feet AKA, small potatoes. I made it to the top, and it was this revelation. This is what I loved. I somehow wanted to do this for the rest of my life. I craved it.

I left for Cedarville shortly after that hike, and was saddened at the idea of not being able to hike anymore of my beloved mountains, and made it a goal for me to hike at least 6 peaks the next summer.

I also started researching the AT, and knew from the first article I read, which happened to be an article from Chuckles, which you can read here, this this was what I was supposed to do. I loved it. It made me laugh, it made me realize the difficulty, and it made me want to do it. Badly. I had what I call the AT Fever. my decision to hike this summer, became a decision to train. And train I have. I have hiked to new elevations, and conquered mountains that seemed impossible at the base, and while I return to my home after every one feeling thoroughly exhausted, I want to get right back up the next morning and do it again. It’s a passion. It’s a desire, and it’s a challenge.

I might have forgotten to mention that I’m doing this as a woman, who is medically certified as overweight and obese. *cringe*

Remember when I said in the beginning that this is personal? It’s super personal.

It’s not easy, it’s not always fun, but it sure as hell is rewarding. Taking those last steps to a summit, crossing the 200th river, ad finally being able to sit down and rest, because you’ve done it. It’s not just about the hike, it’s about the accomplishment. The ability to say I’ve done it.

It’s about the freedom.

Hi! My name is Grace! I was born and raised in a tiny podunk town in Maine. I'm planning my NOBO thru-hike for the summer of 2016! I am out of school for the time being, so I'm letting my inner wanderer run free. I can usually be found in the woods, or having a good cup of coffee at Rock City with a good book. Oh yeah, I sing a lot.