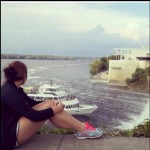 There should be an AT thru-hiking for dummies.

AM I RIGHT or am I right?

Thru-hiking-is hiking a long-distance trail end-to-end. The term is most commonly associated with the Appalachian Trail (AT), the Pacific Crest Trail (PCT), and the Continental Divide Trail (CDT) in the United States, but also refers to other end-to-end hikes.

For Dummies- This phrase isn’t as derogatory as it sounds, but can be defined as an extensive series of instructional/reference books which are intended to present non-intimidating guides for readers new to the various topics covered. The series has been a worldwide success with editions in numerous languages.

Newbie- an inexperienced newcomer to a particular activity. AKA- Me to Backpacking.

There you go, I can finally admit that my Northbound AT thru-hike will be my first official backpacking trip. Don’t underestimate me; I will be summiting Mount Katahdin a few months down the road.

I am actually quite surprised that there isn’t a Thru-hiking for Dummies. I would like to believe that it would have saved me so much time. Since there was nothing of the such, my planning began…the famous five Ws was where I started.

Who- me, myself, and I. I knew this was something I wanted to do alone.

What- Thru-hiking the Appalachian Trail (obviously).

Where- I think for me, starting in Georgia sounds the most appealing and would work the best for my schedule.

When- I debated back and forth in my head on an official starting date, I finally decided that March 15th /16th would be the day I begin my journey.

Why- although this needs its very own post, I’ll shorten it to one phrase- because I can.

Now that I had answered the five most important questions, it was time to get to business. I needed the specific details on which guides, gear, and proper preparation that recommended by successful thru-hikers. This was probably the most time consuming part of the process. I know the Internet has all the information you could ever need, but I was coming across one common problem………everyone reccomends that their gear/guides/prep is the best. Ultimately, making decisions on what brands, hammock or tent, boots or trail runners, etc. a challenge,but with enough research, chats with wilderness pros, and a little chance taking I made it.  I tried to stick with light gear when the prices were reasonable. I frequented Craigslist and EBay searching for the best deals. My philosophy was that if I end up having to replace some gear along the way, I will be able to justify it since I rarely paid full price for anything.

Hey Hey Hey! Aundrea here, I am an aspiring 2016 Appalachian Trail Thru-hiker. Mother of a plus size feline. Lover of life, laughs, and leftovers. Wanderer, adventurer, and beverage enthusiast. I dream of mermaids and motorcycles and meeting a man who can dance.