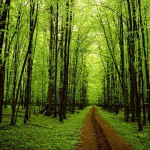 Those Pictures I Promised

Hey there! Remember that one and only post I made while on the trail? The one where I promised a follow-up post full of photos from that week? Well three and a half months later, here it is! 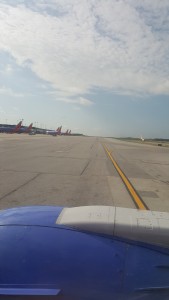 Landed in GA! Only slightly worried that my grandparents will be waiting for me when I land to drag me back home…

I was so paranoid that some how my mother had gone and switched my plane ticket to ship me off to my aunts or that my grandparents would be waiting for me to get off the plain so they could bring me back home. I’m sure I annoyed the guy sitting next to because I kept asking if he was really sure this plane was headed for Atlanta. 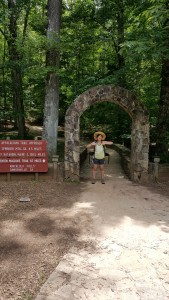 Look at me, naively wearing a shirt with 20% cotton blend in it, so naive.

Started hiking at two in the afternoon! Had a wonderful drive up with Tom, was almost sad to end our conversation but still the trail was a-callin’. It’s funny for me to look back at this photo because none of what I’m wearing made it out of Georgia. The hat and shirt got sent home and the shorts, well I don’t even want to talk about them. 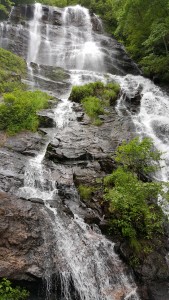 Definitely one of my top favorite nature photos on the trail.

This picture makes me 100% sure that taking the approach trail was the right idea. 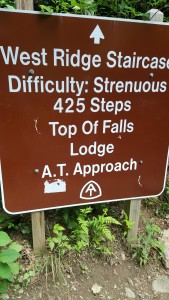 This picture makes me 100% sure that taking the approach trail was THE WORST IDEA EVER. 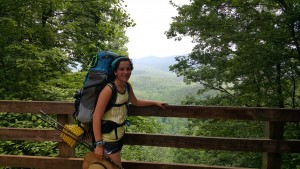 This is the face of someone who just walked 425 Strenuous Steps.

Holy moses, those steps were exhausting. It didn’t help that there were tons of tourists and day hikers out staring at this weirdo as she huffed and puffed up the stairs with a giant pack on her back. 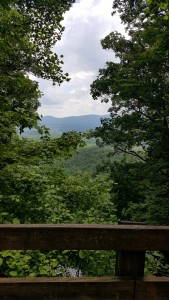 The first of many beautiful views. 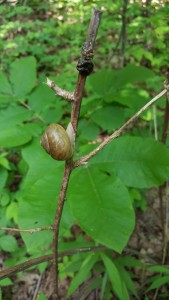 First snail seen, he should have warned the others…. 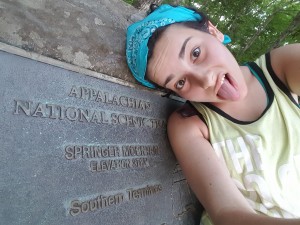 The quintessential awkward selfie on top of Springer.

Finally made it to the actual trail! I had almost stopped at a shelter three miles shy of the summit but after I ate my Mountain House I decided to keep on trucking. Three monumental things happened atop Springer for me: One – I made it to the actual trail and climbed my first mountain! Two – A lady I met up there called me an inspiration and that was the first time someone hadn’t looked at me like was at least a little bit nuts for doing this. Three – I learned the first rule of thru-hiking, NEVER SAY NO TO FREE FOOD. 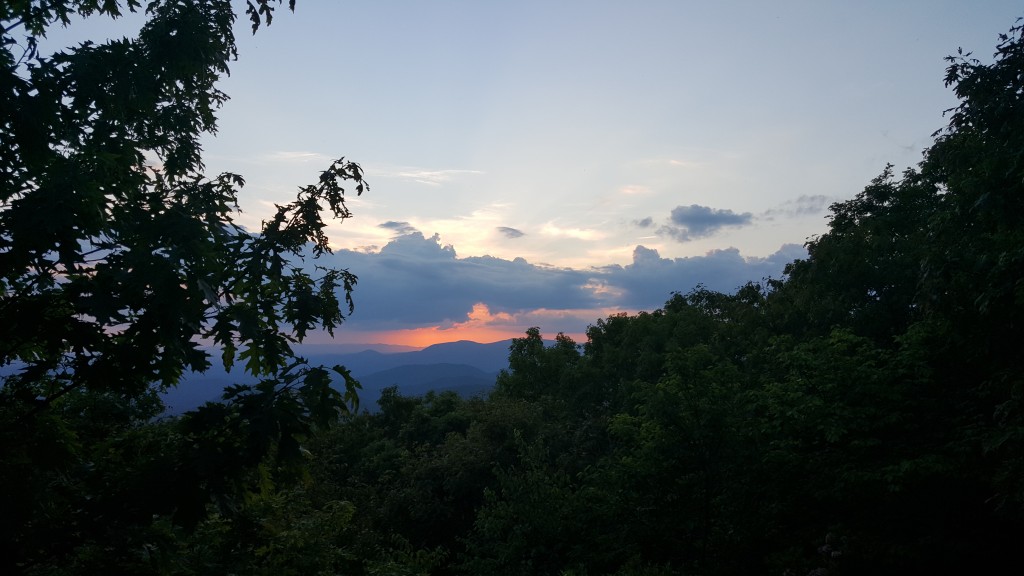 Made it just in time for sunset.

I made it to the shelter just as dark was closing in. Springer Mountain Shelter is one of the nicer ones with a loft and I decided to sleep on top instead of cuddling up with my new friends Unknown and Shivers. I figured if a bear came in it would eat them first and leave me alone. 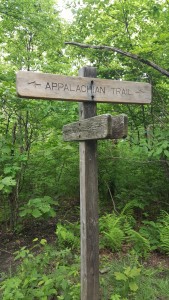 Woke up early for me (aka before noon) after staying up way past trail midnight laughing and cracking jokes with Unknown and Shivers. We had formed our Biscuit Clan the night before,but alas, it was short lived. Shivers hiked south while Unknown and I headed north. 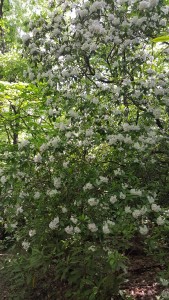 Leapfrogged with Unknown, I hiked out earlier than him but then he passed me after I decided to stop and explore a blue blaze to a little hidden falls. 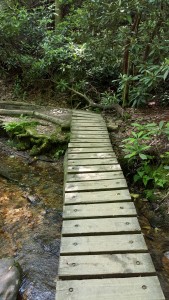 Caught up to Unknown after a surprise storm hit. Lesson of the day: Fear is a great hiking motivator (i.e. fear of getting struck by lightening). Got to the shelter where I was relieved to see Unknown safe and sound. Formally met the guy who had caught me serenading my dinner the night before. We played some cards and had lunch until the storm let up. I was about to leave the shelter to push on when one of the guys in the shelter gave me some candy to suck on to help sweeten the uphills. 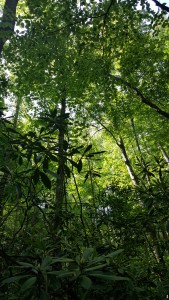 Ended up hanging my hammock near Justus creek for the night and only had a mildly terrifying time of hanging my food bag in the dark. Unknown told me today that the Rhododendron trees we had been seeing only grew like that in temperate rain forests. It was a magical second day. 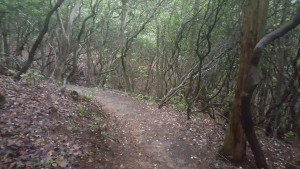 Walking through a Rhododendron forest. 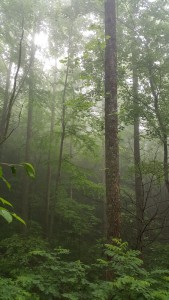 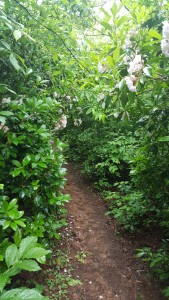 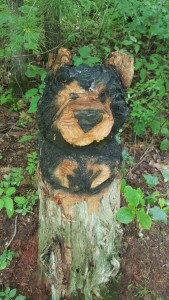 Cute carving on the AT. 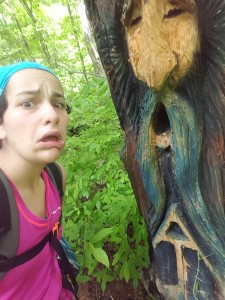 Aren’t I so attractive. 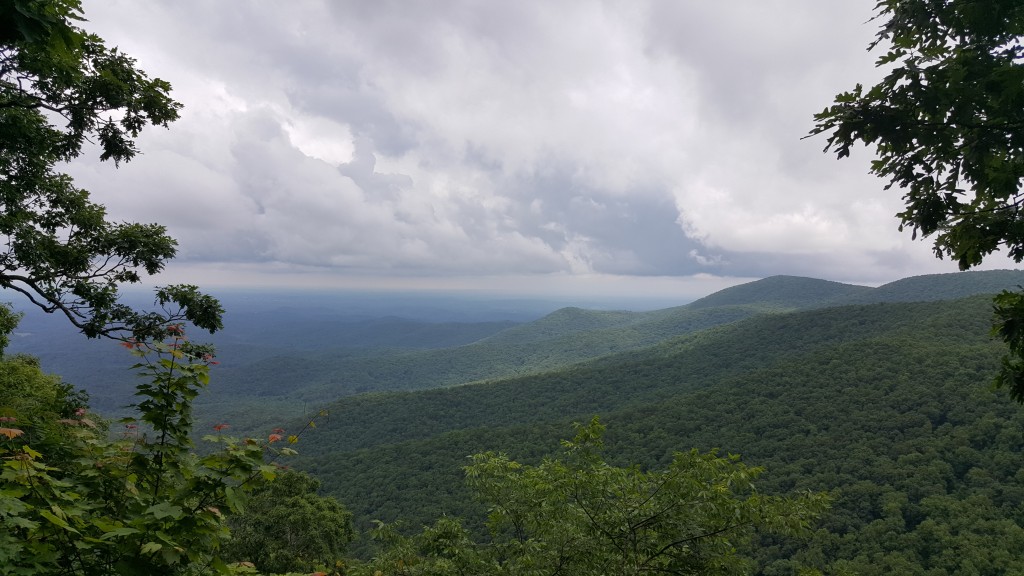 Mountain View, don’t ask me which.

Slept rough the night before. I had once again meant to make it to a shelter but didn’t. A storm hit that night and I tried to stay up to monitor it but between the rocking of my hammock, the pitter-patter of rain on my tarp and me trying to count how far away the lightening was, I was out like a light! 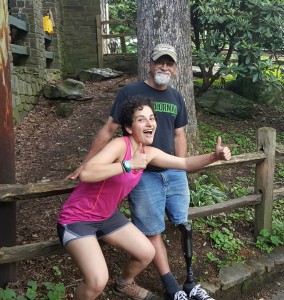 This dork meet One Leg! 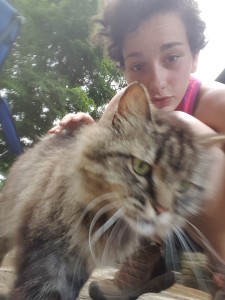 Making friends with the wildlife

Came upon my first taste of civilization at Neels Gap where I met the resident cat and received trail magic from the famous One Leg (thru-hiked with a prosthetic leg) and his family. For some reason I had been craving chocolate milk the entire day and thankfully Neels Gap had some! 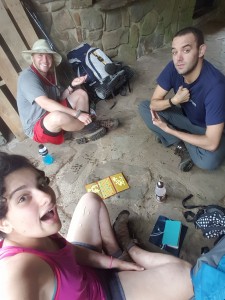 Met up with Unknown at Neels Gap and I managed to entice him and Sir Scrabble into a game of miniature Scrabble. This was the game for which Sir Scrabble was named as he slaughtered both Unknown and I with his skills. 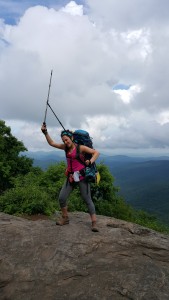 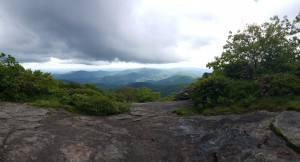 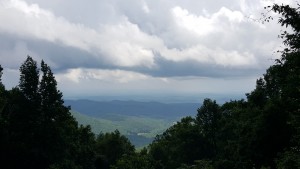 View off of Blood Mtn.

As I was drying out my things on top of Blood Mountain, I got caught in an impromptu birthday party! I took photos for the birthday girl and in return she shared her cup cake! Either it was surprising good for a vegan baked treat or I was seriously craving some cake (probably both). 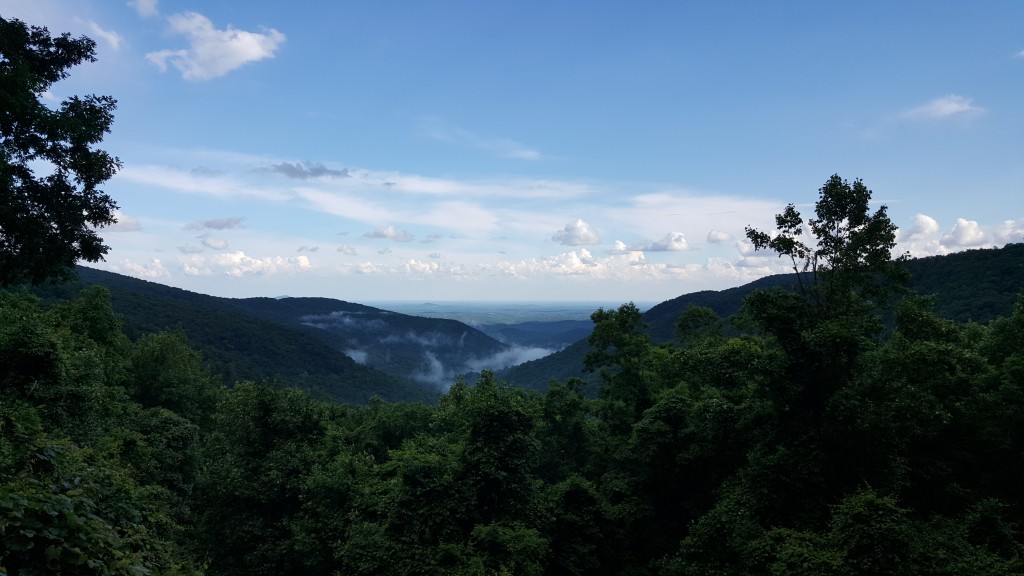 It was a beautiful day, all until the very end when Sir Scrabble and I were hiking out of Neels Gap. In the two miles we hiked to our campsite I crushed eight slugs. EIGHT!! I have learned at least one thing each day and today I learned what a snail under boot sounds like.

Hello there friends, my name is Ruth. I love tv shows, gear talks, reading a wide variety of books and eating a wider variety of food. I've been a Girl Scout for eight years and have a love of nature and a thirst for adventure. I have officially bored all of my family and friends to death talking about the AT and now need some fresh ears (that's where you come in!). I am planning on going on a NOBO hike starting this May. I hope you enjoy following me on that journey!