Three Journeys and a Perfect Moon

Hard work for the next two days over Saddleback, Spaulding, Sugarloaf, and Crocker. I continued to encounter JustGreg and Breakless, though at some point I lost track of JustGreg. The trail through here is windy, steep, overgrown, rocky, rooty, muddy, bog-bridged, and dramatic. Maine makes you feel like a Hiker.

And a moose skull on South Crocker:

I resupplied in Stratton (best and cheapest resupply you’ll find in New England, by the way) and blogged in the one-room town library for a while. At this point I had my plan all laid out. Twelve days. The guy who drove me back to the trailhead thought that I had it all wrong, that Katahdin would be three weeks from here. I smiled inside: with trail legs, twelve days.

Out of town I climbed up Bigelow Mountain—the last 4000-footer before Katahdin. This was a huge moment for me. Several conditions made this an evening I will never forget: the first of August tomorrow,  a full moon tonight, a clear sky, and a sense of an ending.

I reached Bigelow’s west peak forty minutes before sunset. I decided to stop for dinner here; I would make camp in the dark tonight. The high winds shoved and howled until I donned my winter coat and hunkered in a lee. I ate dinner from some special rations my mom mailed me. Meanwhile I watched the sun setting in the west: 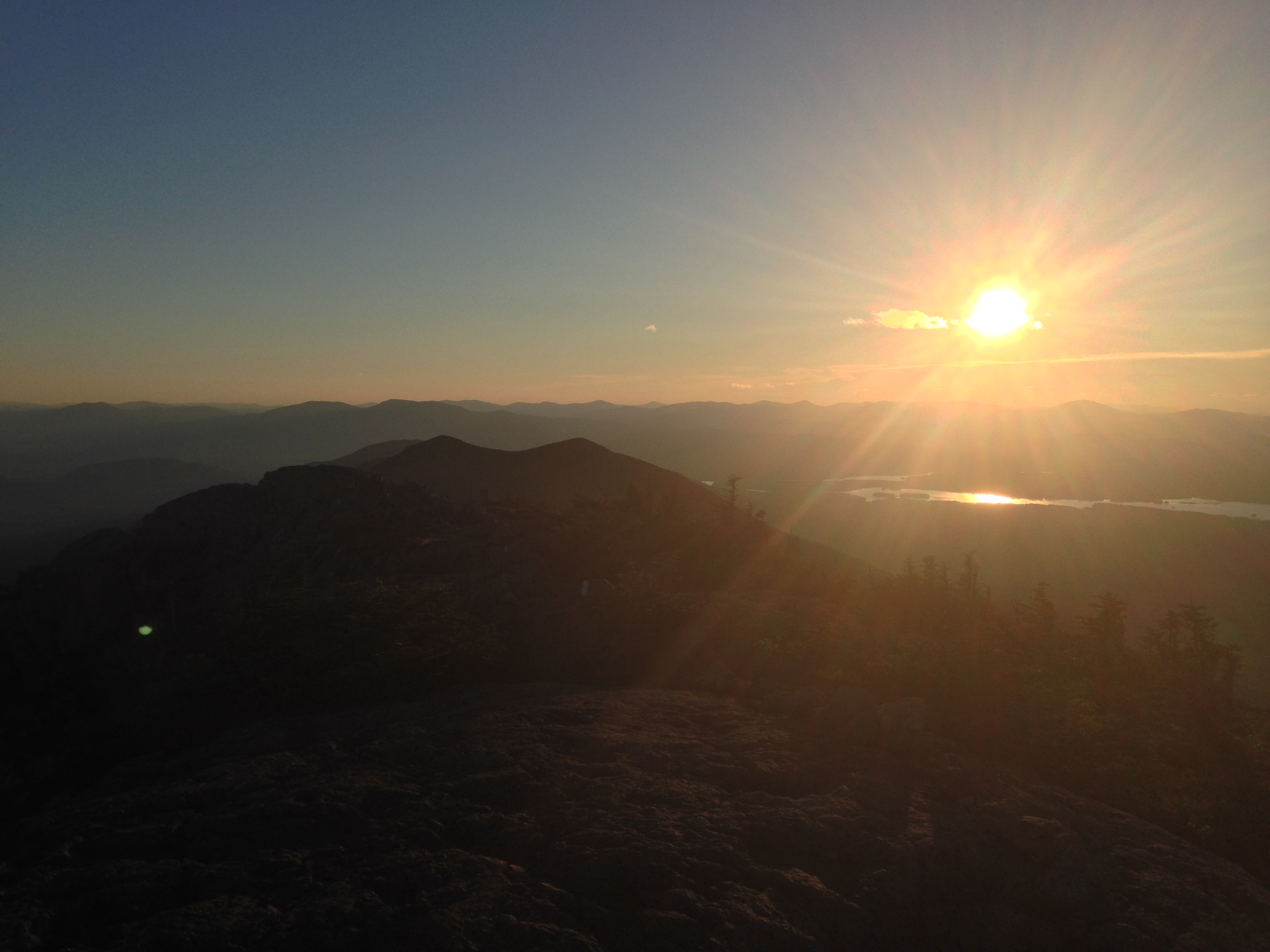 I looked north at the twelve days ahead: 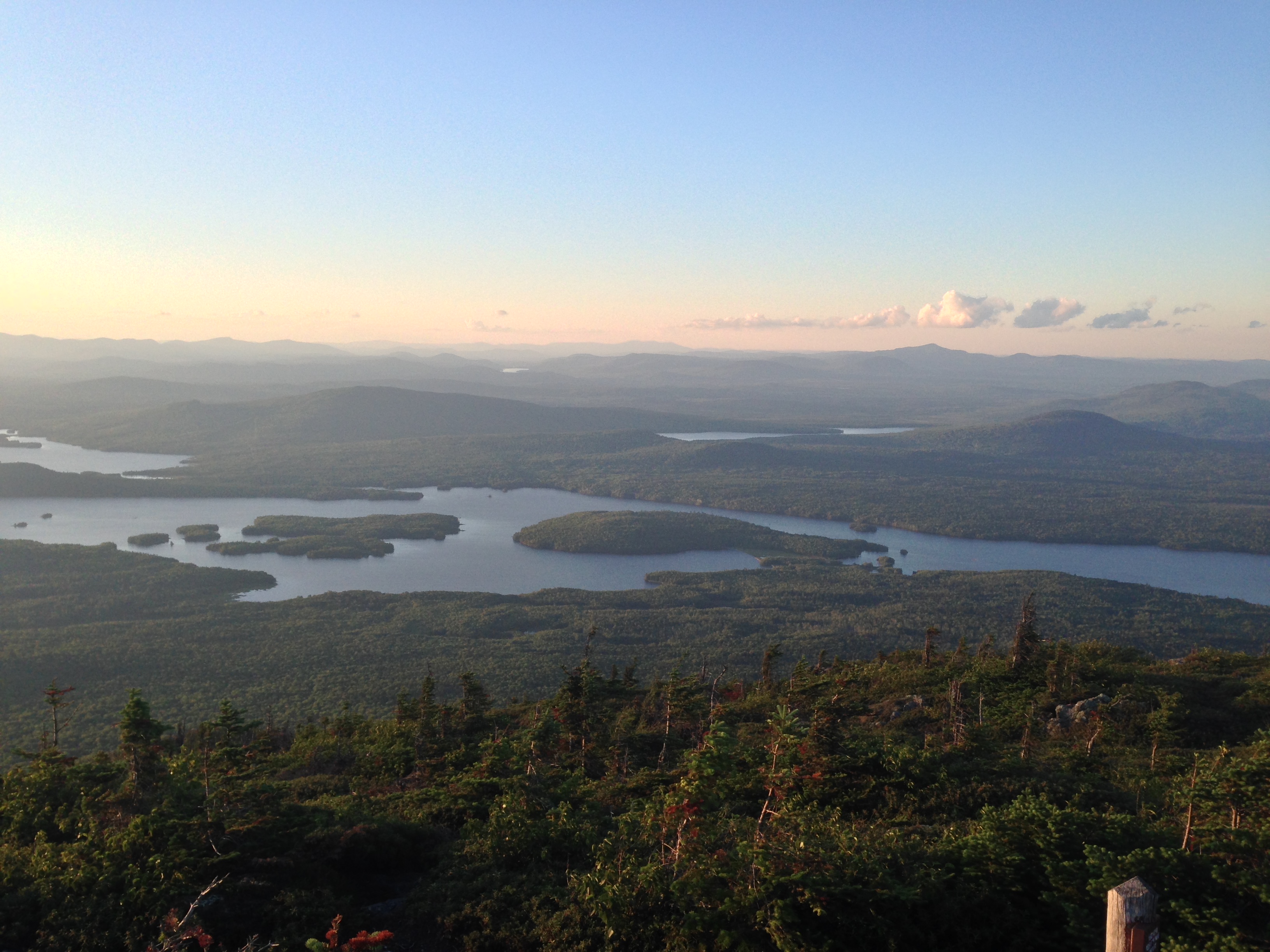 But mostly I gazed south: 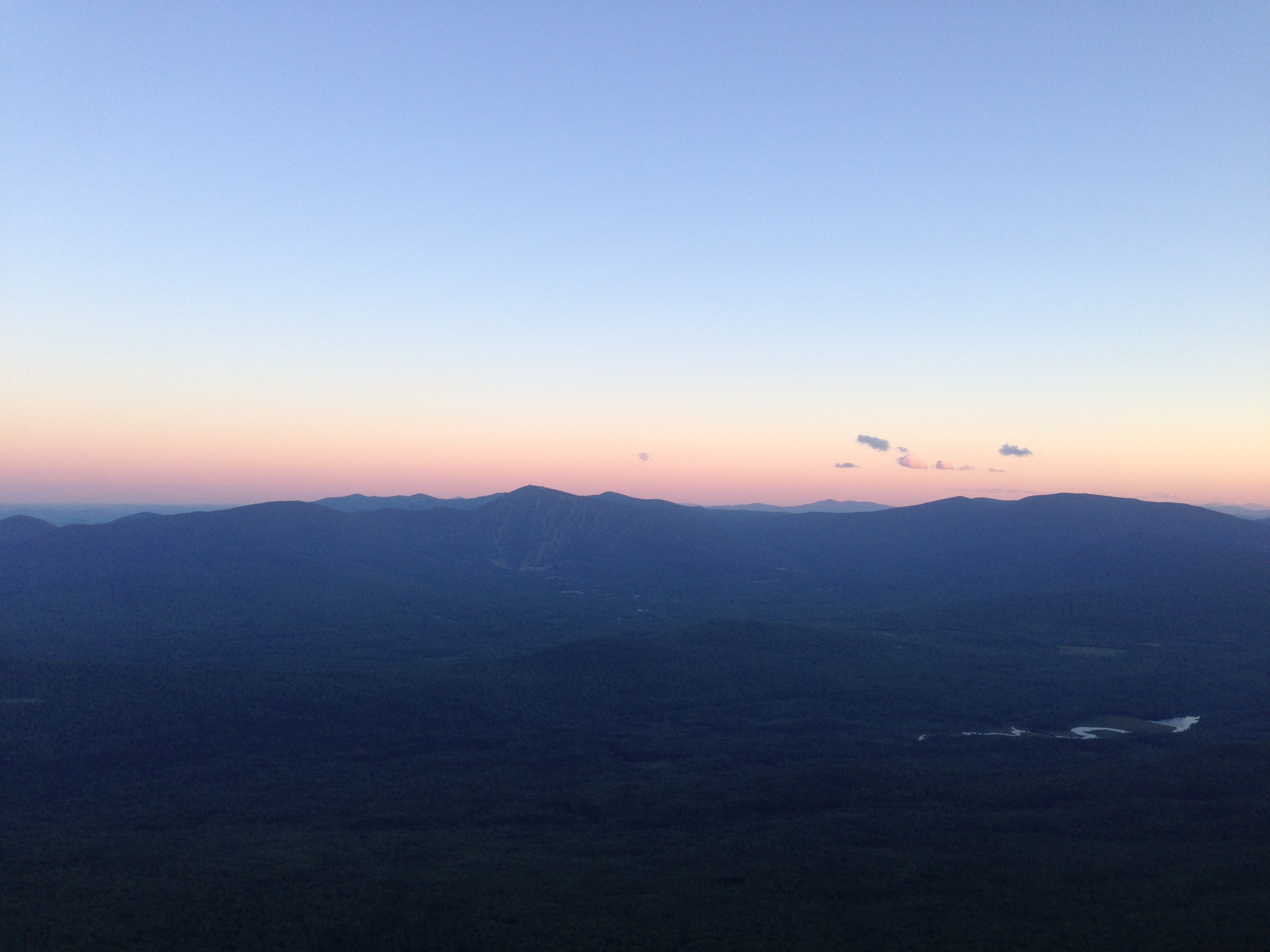 The peaks grew starker as they faded, the air between us like an aging cataract. Majesty and mortality. I was struck, now more than before or after, with the size of my endeavor. All that I had seen and done, it lay before me here. I could see so much of it yet I could see so little. I thought of Kyle and Peace Dawg and 5 and Firestarter, the Smokey Mountains, the Grayson Highlands, the Shenandoahs, the Green Mountains, the Whites.

The sun completed its arch: 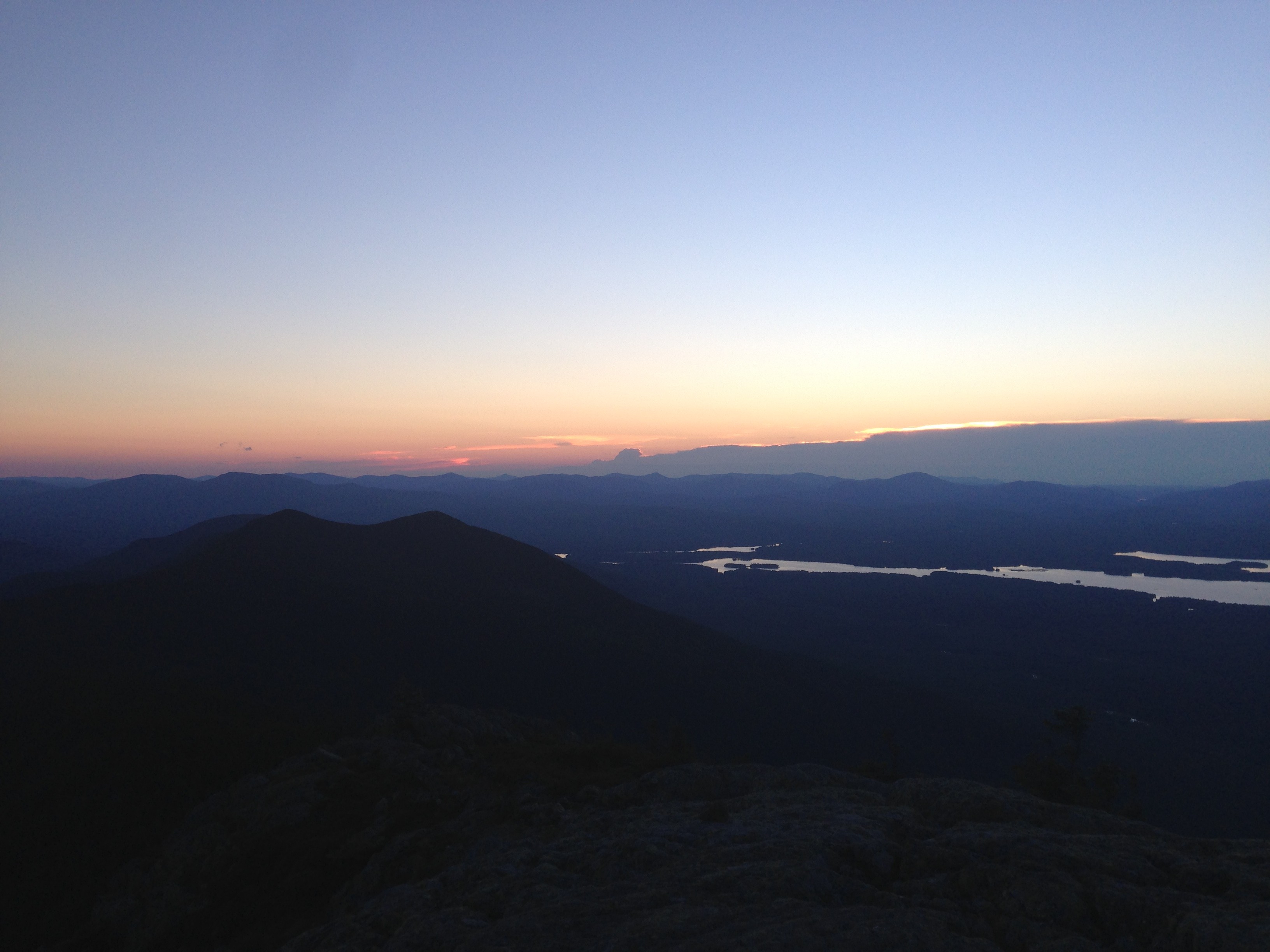 Then I packed up, rose into the wind, and turned east towards camp: 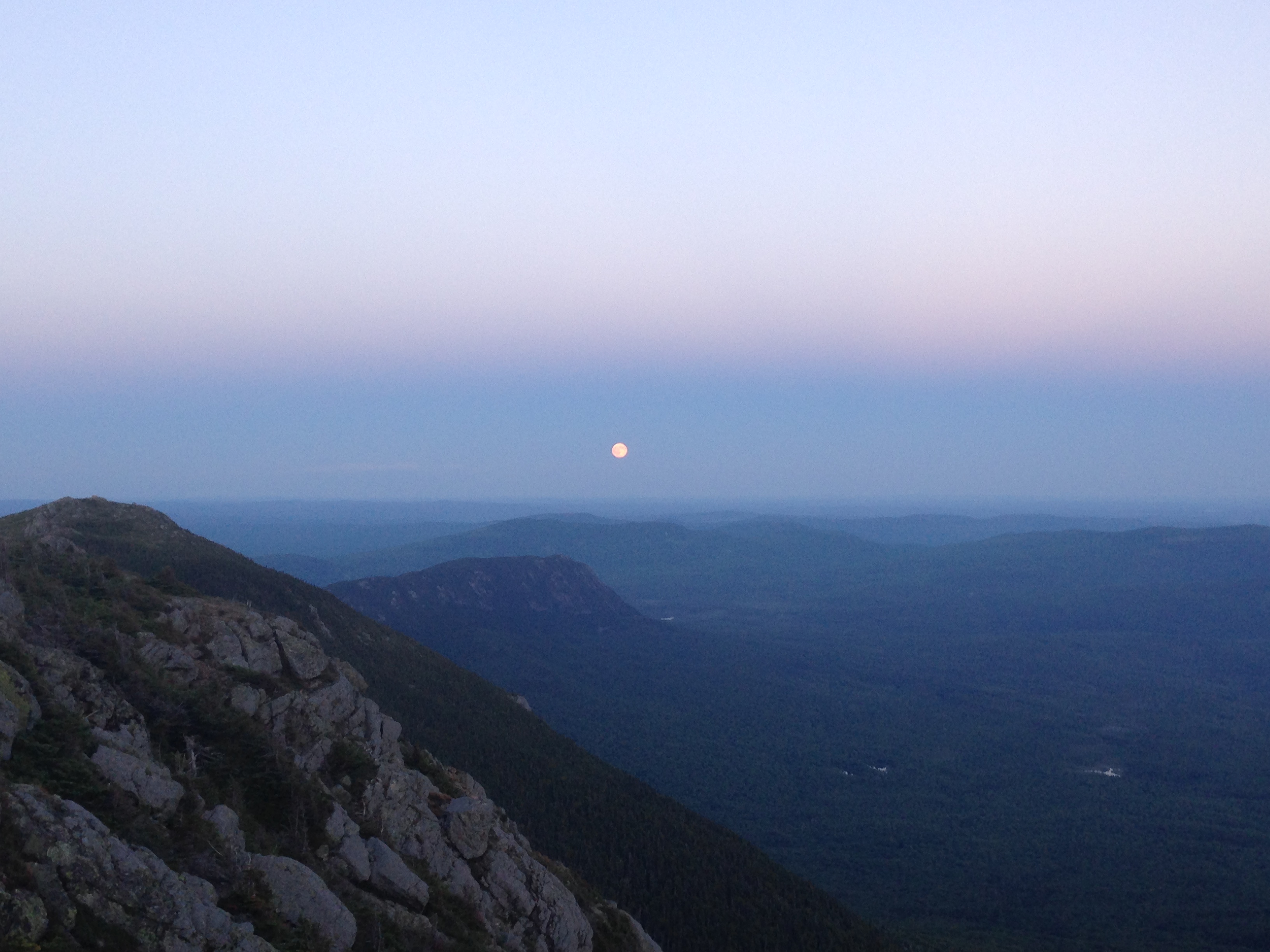 In all that time watching the sun falling I had missed its complement rising. A beautiful moon always overwhelms me. This . . . this was as close to perfect as things get. One of those moments that you cannot ask for and yet justify being alive, just as witness.

The trail was easier from here. On day 147 I camped by one of the several ponds I hiked past. I cooked dinner sitting at this spot:

The next morning I saw my second moose (much larger in the frame, this time): 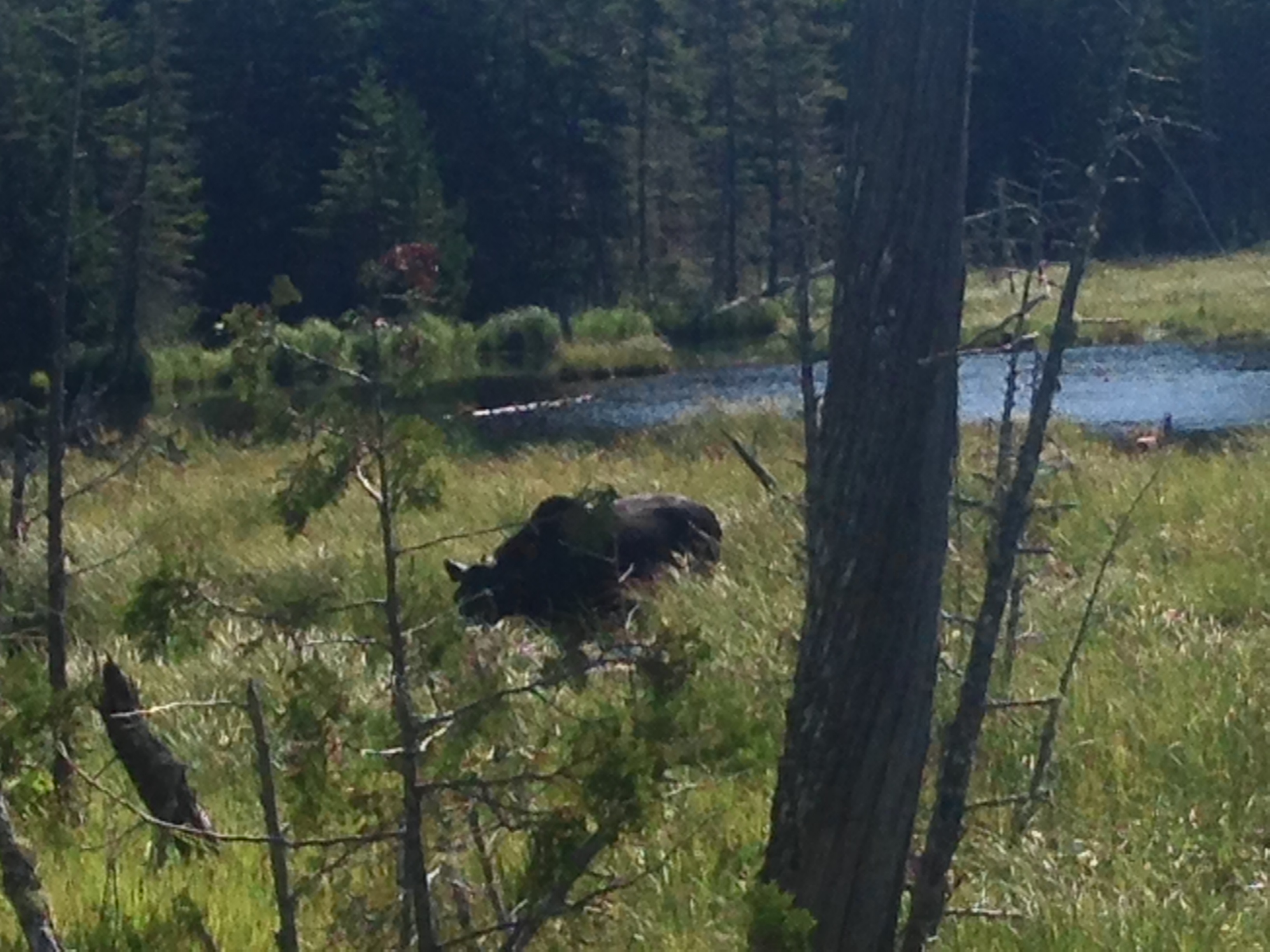 And then on a whim I followed some friendly signs to a place called Harrison’s Pierce Pond Camps. I wish very badly I had taken a photo of Tim Harrison. Harrison runs a sporting camp, mainly for trophy fishing. When I arrived, Harrison was alone, washing dishes; he invited me to fill my water bottles and we talked for a while. He told me how he used to work a suit-and-tie job making good money in Boston until he realized he wasn’t happy. Then someone told him what a sporting camp was. Soon enough Harrison started scouting camps for sale throughout New England. He discovered this camp here, run down and doing poor business. He bought it and moved in. For something around thirty years, I can’t remember exactly, he’s been running this place; he even raised a family from here. Business has gone up and earns just enough to get by, enough to support living in a riverside paradise in the woods, far indeed from the world of suits and ties. Harrison is a happy man, and a dream-man, he told me. He always pushes people to follow their dreams, to do what makes them happy over anything else. He pushed his kids to follow their dreams and he was proud to tell me they are very close to reaching them; then he asked me about my dream. I told him I want to be a novelist, and he was encouraging. I left Harrison’s Pierce Pond Camps feeling better about the world.

An hour later I arrived at the Kennebec River, a one-of-a-kind crossing. Because of a nearby dam and other unpredictable conditions, the water level can change so violently here that bridges have been washed away and fording hikers have died. So the ATC contracts a man to run a ferry service (with a canoe) most of the year.

Waiting for the ferry I gave a hiker named Sonny some tape for a blister. Sonny had been pushing big time, like thirty mile days. The ferryman rowed us across and then told us of a brewery up the road. So Sonny and I hitched to the brewery.

Fittingly, the hitch was a tipsy wedding photographer returning from the job, and he let us off a ways past our destination. But no matter. The beer and burger were delicious, and Sonny told me his story. It started off with, “You may not believe this.” But, as I got to know Sonny’s character, I believed him without a doubt. The gist of it is that Sonny started off his career in the army, becoming a Ranger and later a Green Beret. Discharged after a service injury he worked as a civilian medical responder for a few years until 9-11. He then served as a federal air marshal, and as the war in Iraq accelerated he dove back into the field as a private security contractor on executive detail. He never expected to live this long, he told me. Men in his field, they don’t expect to live past forty. His team protected Stuart Jones, the man who is now the US ambassador to Iraq. In over twenty firefights his team never lost a man, a rare occurrence. But it doesn’t stop there. Sonny moved into private executive detail, protecting famous billionaires including Mark Zuckerberg, Sheryl Sandberg, Dan Loeb, and Courtney Sales Ross. He told me how Mark was truly a nice guy, Sheryl was his hero, and Courtney had some issues to work out. In the end Sheryl Sandberg inspired him. She has a motto: What would you do if you weren’t afraid? Sonny’s answer: if he wasn’t afraid of what it would cost him, he would start a charity to provide mental health care for private military contractors. And that’s just what he’s doing now. He started the Echelon Grey Foundation and is hiking the trail in promotion of it. What a guy to have 3pm beers with in Caratunk, Maine!

We got back on trail later than planned and faced racing nightfall before camp. For the next three miles I hiked as fast as I could without running, seriously hard hiking, and Sonny didn’t blink an eye. He’d already hiked twenty miles before I met him, and after I stopped for the day he kept on hiking, into the dark.

A couple days later I arrived in Monson and prepared for the Hundred-Mile Wilderness.