So, where were we?

When we last met, I was recovering from a bout of “why am I here.” Happily, that moment has passed and the ensuing days have provided a clarity of purpose for which I am eternally grateful. I still haven’t bonded with the AT as I had so naturally with the PCT, but we are firmly on speaking terms and considering couples therapy.

I was originally supposed to take a day off in Hot Springs, having heard it was just the bee’s knees. It wasn’t. So, having gotten in the day before at noon after 13 miles and chilling the rest of the day, I felt it was best to get up at my usual ass crack of dawn and head out.

The first hill out of town was quite the doozy. Just the kind of hill I like to take first thing in the morning before the sun comes up. I passed by a campsite where a group of gentlemen was just getting ready to hit the trail and said a hearty “good morning.” I ended up hiking the next three days, if not with this group, to the same locations. They were a great bunch of guys, just old enough to be serious, but young enough to have that youthful enthusiasm. The five of them had been together since Amicalola Falls and all appeared to enjoy each other’s company enormously. As I was still trying to engage with the trail “emotionally,” hiking and camping with them for three days was great fun. Two were Americans, and three were from outside the U.S. Sherlock, named due to the deerstalker hat he wore, was from Scotland, but raised and currently lives in Hong Kong. Redcoat is a Brit and Achilles hails from French Canada. I jokingly called them the U.N. peacekeeping force, but they referred to themselves as the Commonwealth, which seemed appropriate.

I was lucky for their company those few days, but had to say adieu on day four as we entered Erwin, Tenn.

So, we had a lovely three days of heat and humidity in the 70s and 80s to hike in after Hot Springs. Sure, going from 45 to 80 degrees was a bit extreme. A nice, mild 65 degree transition day would have been polite, but that is simply not how the weather has been tracking anywhere along the Eastern Seaboard this year. Alas, as soon as you think spring has finally arrived (I mean, three days of sun in a row is a permanent transition, right?), winter rears its ugly head again. The weather has been positively schizophrenic this year. Hey, I may suffer from depression, but I’m not bipolar. Heavy rain was predicted for my hike into Erwin, Tenn., followed by snow in the mountains with temps below 20 degrees at night. Snow! WTF!

I got up early and hiked the 6.6 miles into Erwin before the torrential rain and got a bunk at Uncle Johnny’s hostel. Good thing I’m an early riser as everyone was planning to sit it out in Erwin, and after 11 a.m. there were no more rooms to be had, even in the large hotels. The early bird gets the dry bunk with heat peeps.

Now, it’s not like Erwin is the place to hang out. Not unless you find Walmart, McDonald’s, and Bojangles’ the 2018 hot spots. Consequently, I was satisfied with sitting out the rain and going back in for the half inch of snow and cold temps the following day.  Who’s afraid of a little snow, right?

Pussies Don’t Hike in the Snow

The Commonwealth decided to take two days off and soak in the Mountain Inn hot tub through the rain and snow, and thus I haven’t seen them since. Cue the sad music as I dearly miss them. As the vast majority of people entering Erwin that first day decided to do the same, there is a large bubble of thru-hikers behind me.

Fools Do Hike in the Snow

Yeah, so heading out from Erwin, I’m all, “What’s the big deal?” The first ten miles were lovely. Light snow coming down, beautiful field with snow-covered trees, and ice encased blades of grass. God, those pussies in town are missing out. 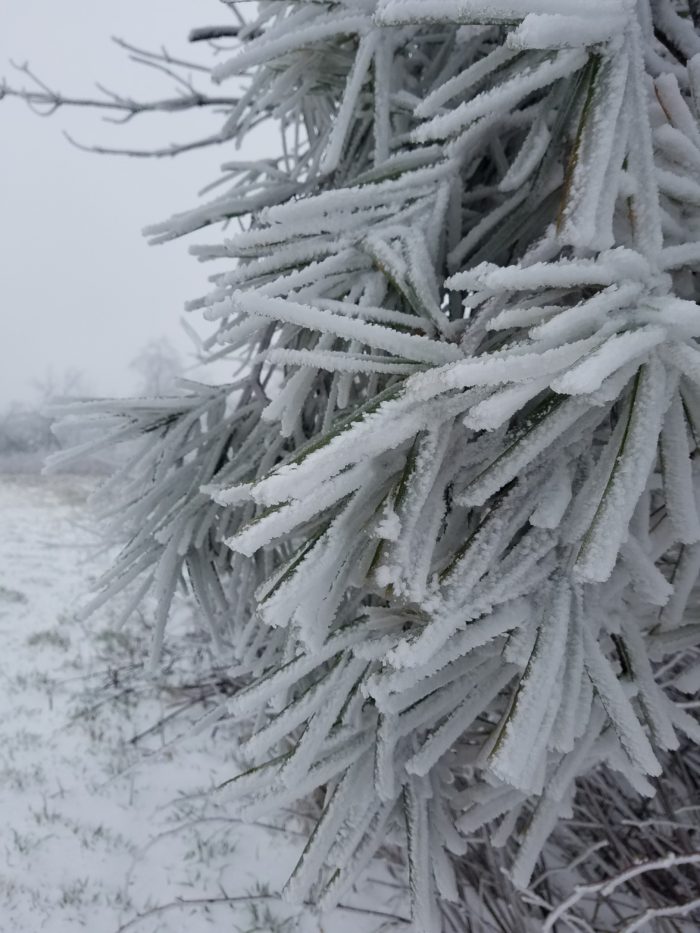 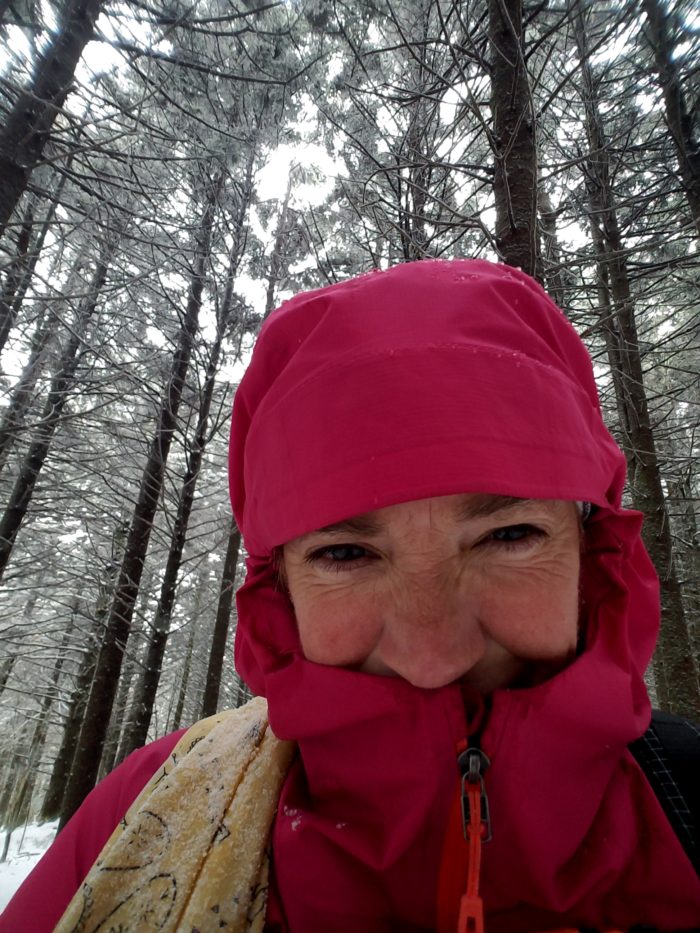 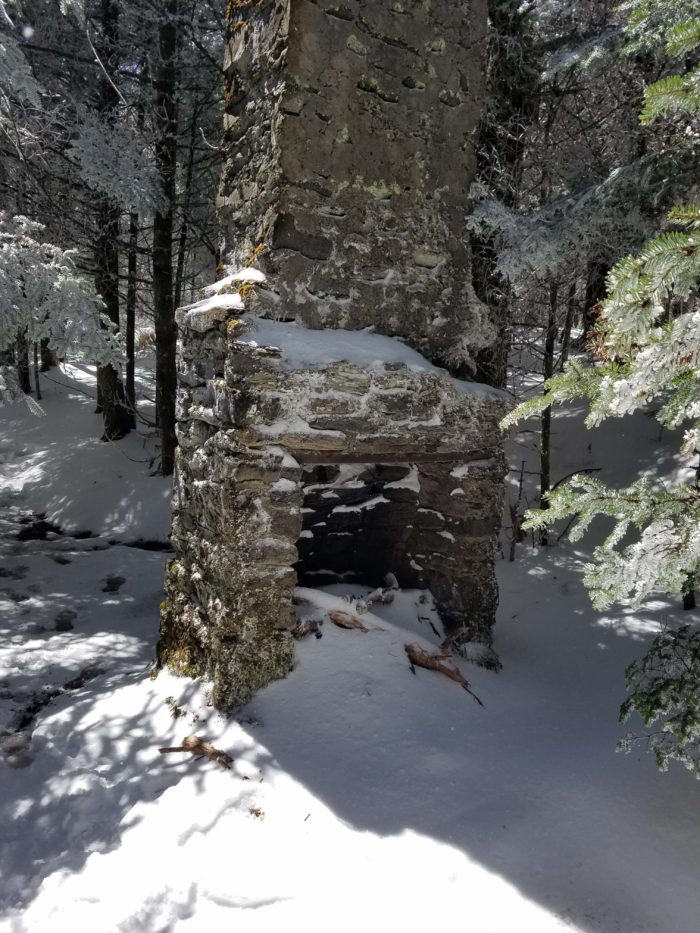 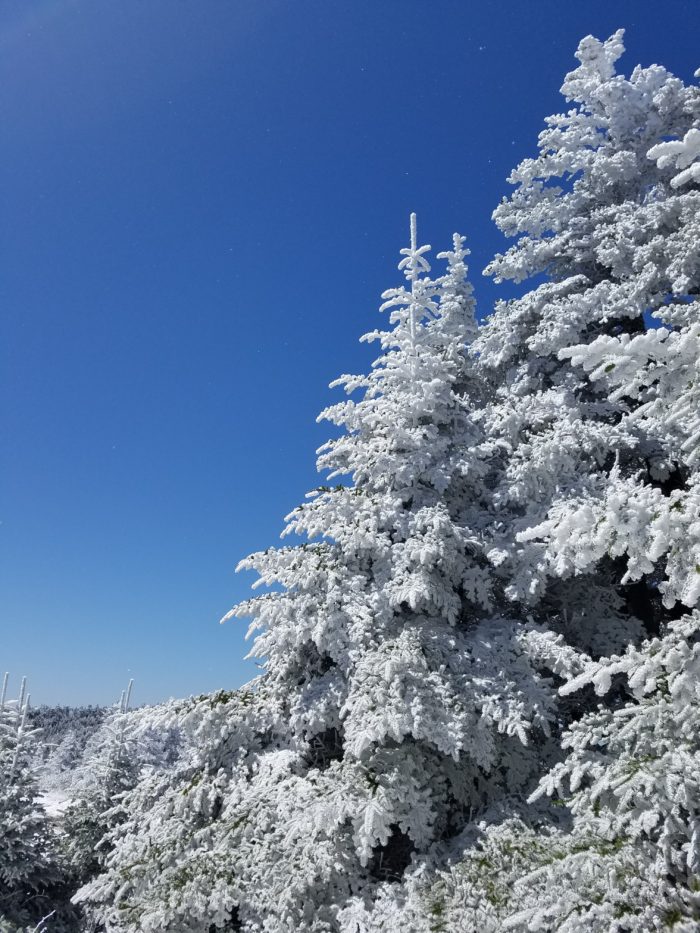 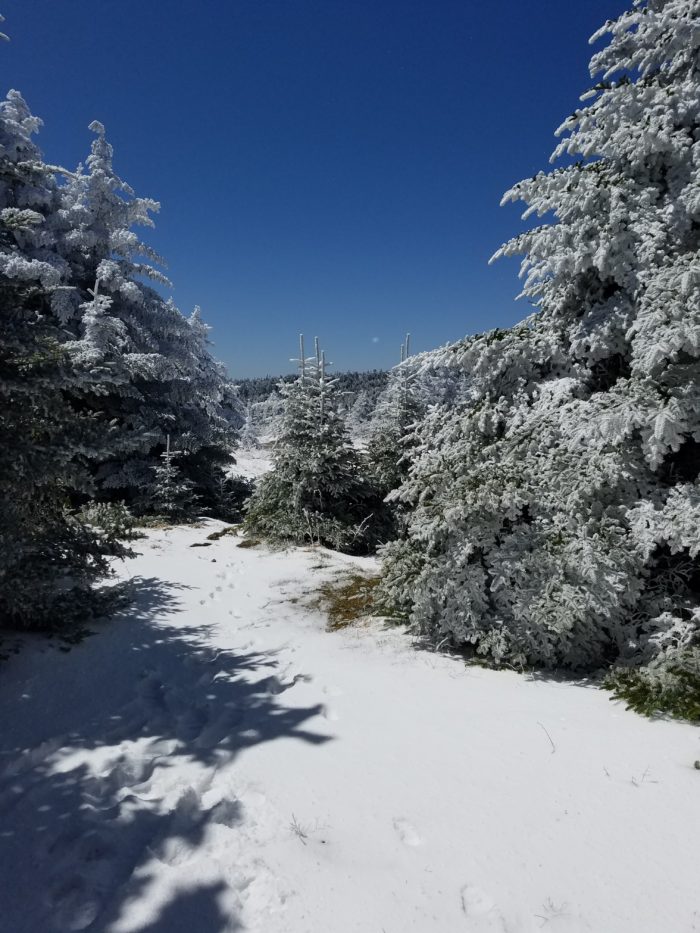 Then the wind starts.

I now have on my down jacket under my rain jacket and just keep moving.  I’m perfectly warm… if I just keep moving. Every shelter I pass has hikers who are giving new meaning to the term “sheltering in place.” Some haven’t left since the rain the previous day.  Not wishing to hunker down at two in the afternoon, but not willing to become a human Popsicle either, I push on. I was already at mile 16. It’s getting cold, and I now realize the shelters will be full, so I elect to drop down to the Greasy Creek Friendly, a hiker hostel 7.1 miles ahead, which turns out to be 8.1 miles ahead due to it being a solid one mile off trail. The half inch of predicted snow turned into snow drifts up to eight inches. The trail was disappearing before my eyes and my lovely day was deteriorating into a death march. Upon walking it, I ask the proprietor Connie if there is room available that evening and she  replies, “You can sleep with three others on the living room floor.” My reaction? Done! One night, a bacon cheeseburger, two sodas, a hot chocolate, and a bag of chips later and it was the best $13 spent on the trail. It went down to 18 degrees that night and I had hiked 24.4 miles that day. Another hiker came in 15 minutes behind me and asked if those were my footprints in the snow. When I responded “yes,” she responded, “Thank you!”

Like the Phoenix Rising from the Ashes, the Sun Rises Again

A bald is a hilltop free from trees or other vegetation. More importantly, you can fucking see shit!

You can see in all directions. You can see the trail stretching out before you. You can look back and see where you came from.

You can see everything.

Yeah, there were 40 mph side winds pushing me off the trail and I could barely hear myself think. But to me it just sounded like a choir of angels singing hallelujah. 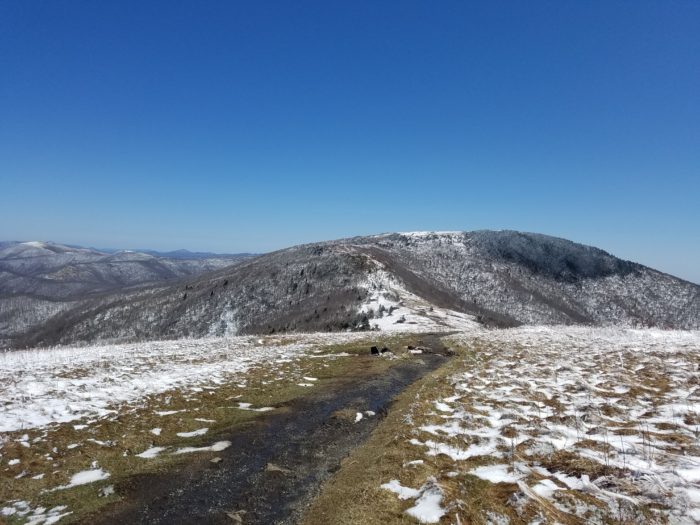 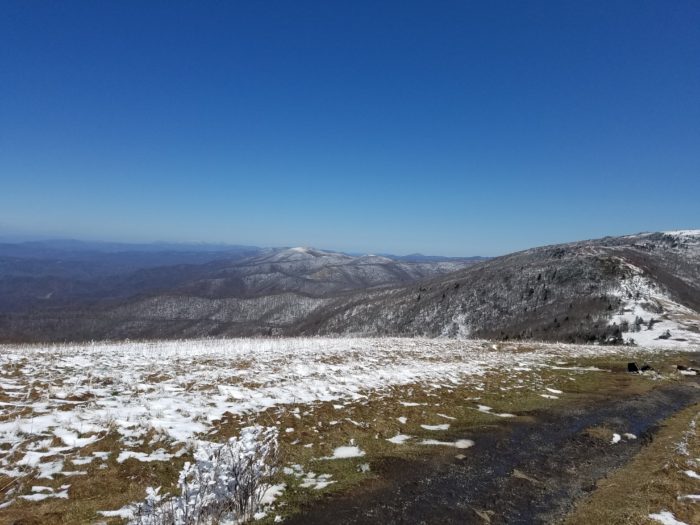 The sun was shining and I felt the sudden urge to twirl uncontrollably while singing the theme song to “The Sound of Music.” But I couldn’t. There were 40 mph winds. But that song did remain in my head for a solid 48 hours. It’s not an easy song to shake. Go ahead, try to get it out of your head now that I have firmly placed it there.

“The hills are alive with the sound of music…”

Yeah, good luck with that one. And you’re welcome.

Trail Magic Comes Back to the Trail

I haven’t had trail magic in a week. Which means I have been relegated to eating the food from my pack and drinking boring ole water. Boo-hoo.

Then there was a magical day.

Like a dream from the distant past, we came upon a road to behold a cooler of sodas and sandwich fixins just in time for lunch. A thru-hiker from 2009 and his wife were on a honeymoon road trip and decided to deliver up a little trail love. He is a Vietnam vet who went on the trail to help alleviate his PTSD, in particular regards to the forest. See, I’m not the only one who feels penned in by the trees. He wrote a book, “At the Speed of Foot: Rez Dog on the Appalachian Trail” (Mark Fleming), and they were heading next to New York to speak with someone about a screenplay and movie development. Finally, a movie about someone who finished their thru-hike. His wife was particularly thrilled to see a woman finally come off the trail as she had yet to see one that day.

After having hiked 22.5 miles, I was looking to camp for the night at Low Gap. To my thrill and amazement, there was a little thru-hiker barbecue  going on at my intended campsite. I settled on down for a beer, burger, sausage, corn on the cob, watermelon, and great conversation. After an hour of rest and a full belly, I decided to hike the remaining 4.8 miles to the next shelter. Let’s have a round of applause for Ronin’s first 27.4 mile day on the AT.

After a short ten-mile hike in the a.m., I dropped down into  Damascus at 9:45 the following morning and have been sitting on my ass at Woodchuck’s Hostel ever since. Decided to take yesterday and all day today (Saturday the 22nd) to rest up before heading out north again tomorrow. 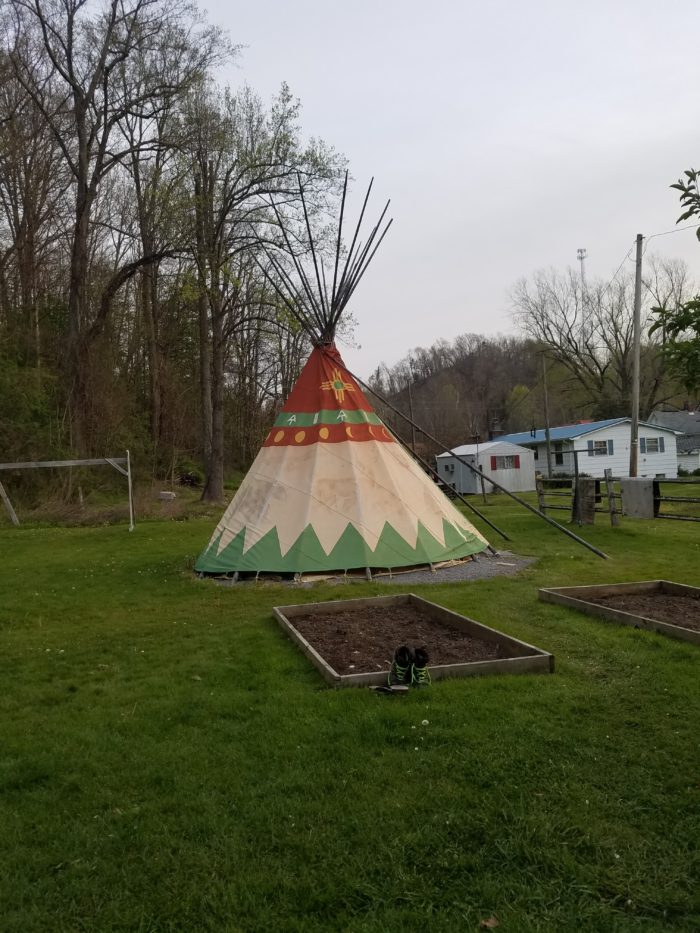 Oh, and did I mention that my wonderful mother sent me a care package with all kinds of goodies from Trader Joe’s? No? Well, she did. At first I was disappointed that there was no card inside as she always includes a card with all my resupply packages. Then I noticed the inspirational quotes on top of every treat. She is so adorable! I’m 53, and this never gets old. I love you, mom! 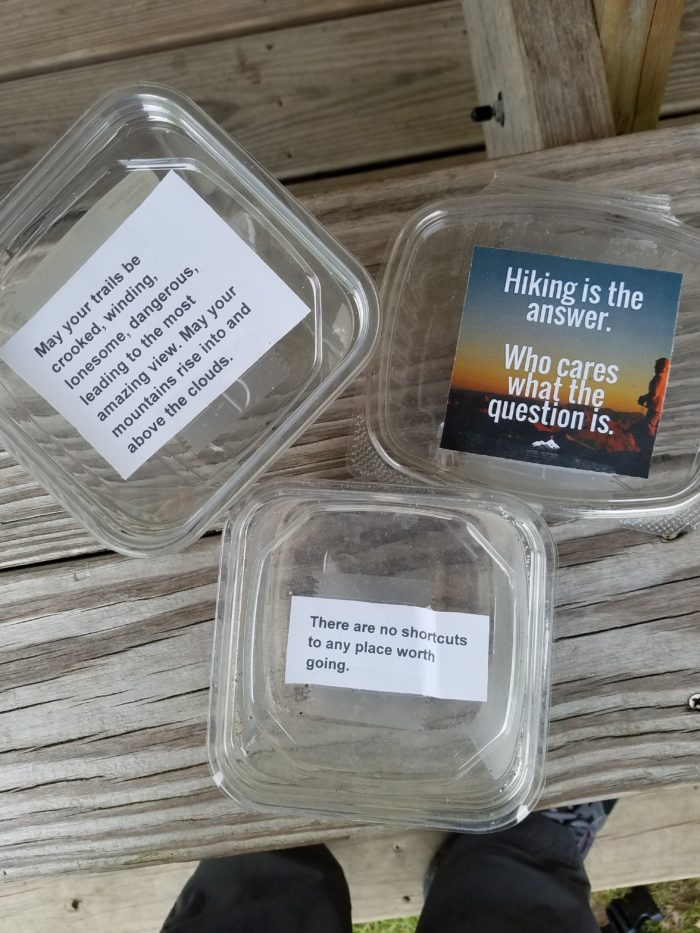 I feel like my groove is coming back and I’m beginning to like this trail. It’s not quite a crush yet, but we may have a future. Optimism is the word of the week. I want everyone to spell it and use it in a sentence… while trying to get “The Sound of Music” out of your head.

Leave a Reply to Rick 'from the Valley' Holmes Cancel reply