Days miles: Still don’t know. This information was torn out of my guide book for fireeeee.  Muahahahaha.

Happy Easter!  I woke up to an Easter sunrise which was really awesome.  It was cold and rainy the day before so to know that the sun was coming out was the best feeling.  I spent a good amount of time that night with three of the men I stayed at the shelter with the night before.  Their names were GORP, The Mayor, and Ryan and they were out for a section hike.  I’m calling The Mayor The Mayor because he is The Mayor of the town where he’s from even though we never discussed this.  It was great hanging out with them as I missed my bubble.  New friends are fun.  The people I have met out here are all amazing and so nice.  I’m still just Amy on the trail.  People have toyed around with a few names here and there but nothing sticks.  I met a hippy vegan guy who is pretty good with trail names.  He he’s been saving Stardust for someone and that someone could be me.  Why Stardust?  Because everything on the universe is made of stardust, including me.  I was like okay, cool.  Not directly denying the name but not taking it on either.  I think it sounds like a name for My Little Pony.  I went to bed and about 15 minutes of silence goes by and I hear a happy hippy voice say “Goodniggghhhhtttt Stardust.”  I just sat in my tent and giggled and said goodnight back.  He’s been calling me Stardust ever since.  It cracks me up, but I’m still Amy for now. 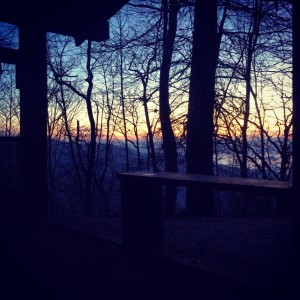 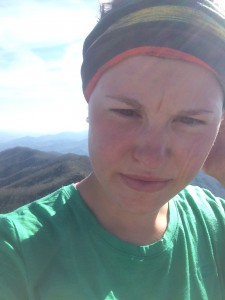 Sunburned lips and I lost my Chapstick 🙁 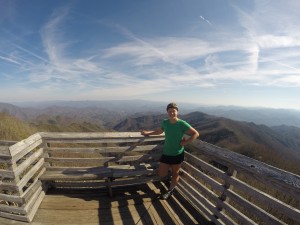 I saw two garter snakes before making it to the NOC.  They are so fast!  I was pleased because I’ve been wanting to see a snake.  I like seeing them as long as they don’t surprise me.  One time I was using a bathroom in a barn.  I saw movement to my left and less than a foot away from me there was a good size black snake climbing the wall.  I stood up without thinking, screamed and peed all over the floor.  The NOC is a magical place.  If you’re from the Charlotte area, it’s like the White Water center.  If you’re not from the Charlotte area, it’s a place that has white water rafting, kayaking, fishing, zip-lining, an outfitter, plenty of beer, a general store, and two restaurants.  As soon as I got there I ran into Texas Jack who I let borrow my phone the day before.  He bought me a pint of ice cream as a thank you.  I was so excited!  I received my first package on the trail.  It was from Tony.  Remember Tony?  He was the retired philosophy teacher from the original crew.  He got off the trail due to a bad knee and sent me a package of dehydrated re fried beans because he knows that I like them and a GoPro screw because I lost mine.  Thanks Tony!  So many wonderful things happened at the NOC.  It was a really nice day too.  I caught up to my bubble there and hung out with them for an hour or so by the water before they left.  I had been away from them for 2 days, which feels like forever out here.  I ate dinner with Walter White, Persistent, Refugee, Train, and Wild Child.  I had a rice, chicken, veggie, and cheese plate because I need to get my veggies in as much as I can.  I also got a brownie sundae because I’m on vacation!!! Whoop whoop! 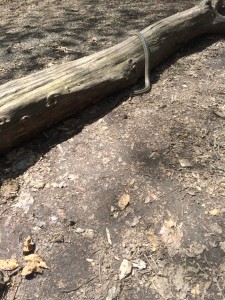 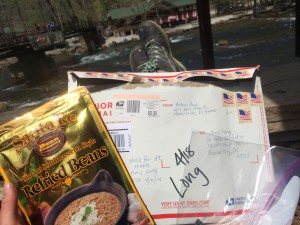 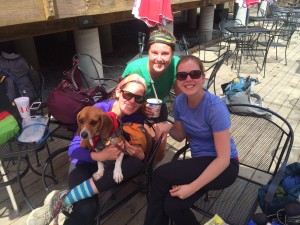 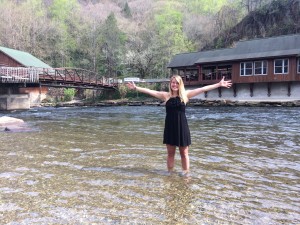 I ate breakfast at the NOC with Bear Claw, Pig Pen, and two other guys.  I ate a kind bar, chicken egg and cheese biscuit, cantaloupe, french toast, about 5 diet cokes, finished one guys biscuits and gravy, finished another guys pancakes, waited an hour for lunch, ate a veggie pizza, and then got a pint of ice cream.  Someone said “Do you always eat that much?”  No!  Maybe.  Okay, yes.  I hiked that day with a personal trainer named Harley.  It was all uphill that day and he casually chatted while I breathed heavily, sweated profusely, and tried to pretend I wasn’t dying behind him.  He just started his hike on the 17th.  That’s  a lot of miles per day.  When I arrived at the shelter I shed my first tears on the trail.  Not for the reason you might think though.  The shelter had a fire pit under the roof.  I ended up on the upper level where I basically got smoked out.  I coughed, snotted, threw up in my mouth, and my eyes watered uncontrollably.  I woke up at 1:30am to Shady the dog growling at something.  He spotted some kind of animal in the woods.  I wonder what lurks around when Shady is not there to scare it off.  After Shady scared the animal off, this guy got up and grabbed a huge stick/spear thicker than my arm and as tall as he was.  He held it upright as he looked into the woods and I heard Walter White whisper “A wizard!” 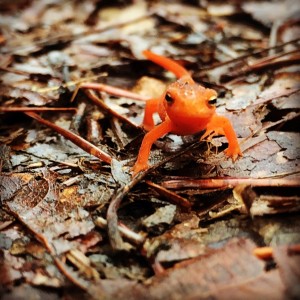 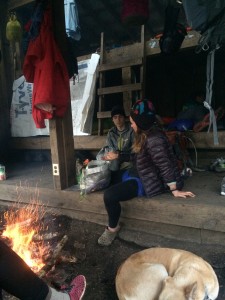 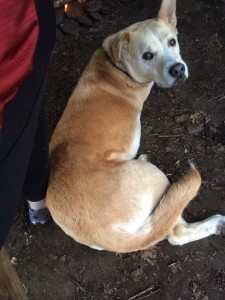 I picked up a leg warmer!

Not sure if that video will show up.  It’s Shady growling at the danger in the middle of the night.

Today was the closest I had come to going into panic mode.   It was a really nice day, so I took two long breaks to hang out and read my book in the sun.  I planned to roll into camp around 6:30 with another couple hours of sunlight left.  I missed the sign for the shelter and had to hike three more miles as I watched the sun sink lower in the sky with no guarantee that there would be anybody camping at the campsite I was headed to.  I’m too scared to camp by myself.  It’s too early in the game plus I’m not sure if I’ll ever be comfortable enough to camp by myself.  Paranoid Amy has come up as an option for trail names.  On the way there I told myself “Amy, you are exactly where you are supposed to be” to keep myself calm.  I made it to the camp site with 15 minutes of light left and I scared the crap out of Erika when I gasped out of excitement because there were other people at the camp site.  She thought I was a bear.  And they were not just any people at camp, but my friends!  All was right in the world. 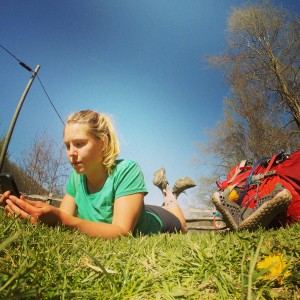 Rick, Erika, Walter White, and I made it to Fontana Dam around lunch time.  I got a cherry Coke out of the Coke machine.  I never drink regular soda.  The trail is doing weird things to me.  I ended up staying in a room with Walt which worked out great because he’s pretty mellow, I’m pretty mellow, we had two beds and plenty of room, and he let me watch my shows.  Oh how I love my shows.  Being around people all the time sucks the energy out of me.  I needed time to reboot and that’s exactly what I got.  The lodge is really nice and they have a thru-hiker rate that’s a very good price.  Sissy sent me a resupply box and it was like Christmas.  My favorite part was the three different kinds of trail mix.  I’m one of those people who has to try everything, so I was so excited to have different kinds to try.  I was about to put them all in one bag but then I was like HOT DAMN!  These are different treasures!!!  They all had nuts, but different kinds of chocolates and berries.  One even has mini peanut butter cups.  I love my life.  I love my life.  I love my life.  One time I went on a first date with a guy who admitted he liked wearing expensive clothes, and wanted to drive a really nice sports car, and couldn’t wait to live the city life, and he called me high maintenance.  I was like woah…not even a little bit.  It’s the little things like multiple trail mixes that make me over the moon happy. 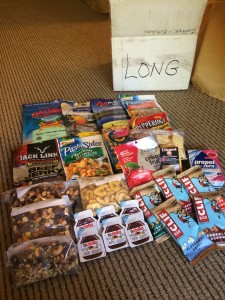 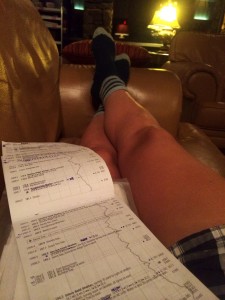 Getting a little too comfortable in the Fontana Lodge lobby

Time to head out! It’s supposed to be a rainy day today. 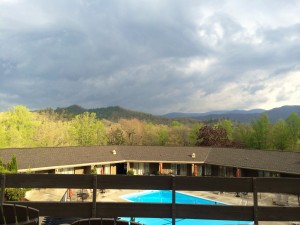