So earlier last month I went to a art frame store to see about mounting my National Geographic map of the AT.  I like looking at it, and am thinking that Linda and the rest of the family can follow Ian’s and my progress on the map next year.   After I walked in, I realized the store was a little “artsy” and I was a little unsure of myself being in there with a poster of a trail rather than an oil painting.

I put it on the counter and as I unrolled, was apologetically telling the consultant, “this is probably an unusual request and something you haven’t seen before.”  I did not get the response I expected.

Rather than looking down his nose at my idea of “fine art” He responded,   “Oh, I’m very familiar with this.”

There was something about the way he said it and started staring at the map.  “Did you hike it?”

At this point he paused for a minute and thought.   “Well, I think so.  We got to Katahdin Springs late – in October –  and after waiting through four days of bad weather for them to let us climb it, I decided to go home. I had climbed Katahdin many times and already had pictures from the summit, so didn’t feel I needed to climb it again.  I suppose it’s technically not a thru-hike but I think of it that way.”

So instead of a quick exchange with someone who I expected to look down their artistic nose at me and my poster, I spent a considerable amount of time talking about the trail with him.  He started with a group of nine friends.  By North Carolina only five of them were left.  One more dropped off due to injury, and four of them made it to Katahdin.  He’s thinking of doing it again with his friend’s son, who plans to hike it after his graduation.

I never asked him his trail name, but at the end of our conversation, he said,  “If you want to talk about your plans or ask about my experiences, come on back and ask for me.  My name is Ian.”

Imagine that.  A thru-hiker, and he has the same name as my son.  Amazing – you never know where you’ll run into a thru-hiker! 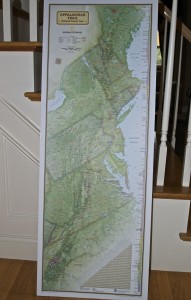 My map. I hope Linda likes it as much as I do….