Thru Hikers to the Rescue and the Dark Side of Technology

First off, this is the time period where I lost my phone, so any and all pictures in this update were taken by Torch, River, Hybrid, Silky, or Peregrine.

After Duncannon I started hiking with River and Hybird. Sort of. Mostly, they would hike more than me then I’d catch up while they were packing the next morning. Sometimes we camped together, but after being alone for a bit it didn’t stress me out anymore that I wasn’t always with them.

What did stress me out was the water situation. I started to really have to pay attention to where the next source was, because sometimes it wouldn’t be for another 10 miles. What I ended up doing was chugging 2 liters in the morning before I left camp, and leaving camp with another 2 liters in my pack. Stopping every mile to pee? No problem. This worked out really well at times. I wasn’t super thirsty in between sources, and I had enough water to get me through. When it didn’t work out, the three of us started planning to go into town just to get water. Water sources dried up? Problem. 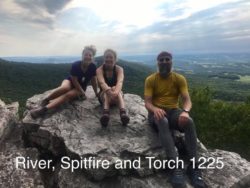 Northern PA is pretty dry, but the trail community responded. Often, people would leave gallons of water at road crossings. I never got to the point where I needed it, but I’m sure that there are hikers out there that did. Shout out to the trail angels that make sure we stay hydrated!

As promised, the PA Rocks made their debut shortly after I left Duncannon. They are not screwing around. It was like someone purposefully stuck the rocks in the trail so that their sharp pointy parts were sticking straight up out of the ground. It was like walking on large chunks of broken glass, for miles on end. 0/10, would not recommend. 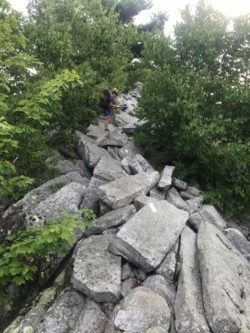 Some of the larger PA Rocks

At Port Clinton, we met up with Torch who had taken a few days off. Torch is the real MVP because he brought us sandwiches and then took us to the Yuengling Brewery for the tour. This has nothing to do with rocks, but just wait, I’m getting there. 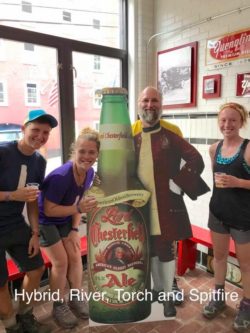 Hooray for side trips!

Torch and I at one point had a disagreement about which was better, rocks or mud. I said mud. Mud is squishy and cool, while rocks are hard and unforgiving. Torch, after having hiked around in the mud for three days back in Viginia, preferred rocks. When I met up with him at Port Clinton, however, he had this to say to me; “Spitfire, you were right. Mud is so much nicer than rocks.”

As I hiked along one day I came to a group of hikers standing around with their packs on. Odd. Hikers don’t do that. When I asked them what was up, they pointed out a dog on the side of the trail. “We think it might be hurt, but it growls at us when we try to get close.”

All I remember thinking was, “well there goes the rest of my day.” There was no way I was leaving a dog in the woods alone. After having worked with dogs for 7+ years, and also being a trained first responder, this job was screaming my name.  I took off my pack and got out the pepperoni. The dog did, indeed, growl at me when I got too close. That was fine. I tossed it a piece of food and walked away. The dog sniffed at it, suspicious at first, then woofed it down. I came back, and eventually had this dog eating out of my hand.

Kona the very large dog that could walk herself out.

Despite the food, the dog still would not let me get a hold of its collar. The stalemate was broken only when a fly started buzzing around the dogs head. The dog sat up to fend it off, and even walked out to the trail where the other three hikers were. Okay, so not injured. Good, because carrying a Bernese Mountain Dog/St. Bernard 3 miles to the closest road was not on the top of my bucket list.

I also learned the dog was a girl. She started walking around our group, still suspicious of us, but also clearly scared. She took a liking to Mougli, and he was able to read off the phone number and name on her tag. Her name was Kona. Mougli also got a makeshift leash on her.

The five of us, Silky, Left Eye, Mougli, Kona, and myself made our way up and over a little mountain, 3 miles to the next road. It was slow going, but Kona was much happier being on a leash. As soon as we got it on her she was much more confident, and wasn’t even scared of the thunder when it started.

And so we rescued a dog. Apparently she had been missing for four days. The people that came and got her were really excited that she was okay. However, whilst waiting for them to get there, it started pouring. This is how my phone got wrecked. I wouldn’t have a phone for the next three weeks.

The DWG and the Great UPS Fiasco

After ruining my phone, it took another six days to arrange for a new one to be sent, and to hike to Deleware Water Gap where it would be. Shoutout to Cathy for straight up giving me a barely used iPhone. You rock!!

My mom had arranged with UPS that the phone would be at the DWG post office at 11 in the morning the day after I got there. No problem, I’d sleep in town, take some much needed time off, and get it the next day.

When I went to get the package however, it had not shown up. Since it was a Saturday, the post office closed at 12:30. I waited and waited and nothing. No big brown truck pulled into the lot. As she was leaving, the woman working at the post office told me I could stay there and sign for the package of it came. So I waited some more. 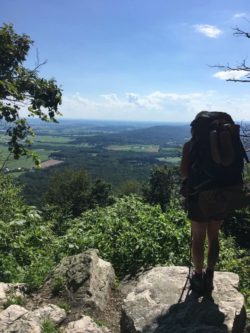 During this time I used Torchs’ phone to call UPS multiple times. Each time they told me “it’ll be there in a hour.” Two hours later I would call them back again, still not having received the package. One would think that if a package were guaranteed to be delivered early, that would be the drivers priority. I guess that’s not how it works? I’m curious to know how it does work.

I waited at that post office for a solid five hours. Completely wasted a day where I could have been hiking. Torch, being the wonderful person he is, waited with me so I would have a phone if I needed to call someone. I felt awful about wasting his time too, and after all that I still didn’t have a phone.

After spending an unexpected and unproductive zero day in a post office, I was ecstatic to see Peregrine walk in out of nowhere. He was on his way to the bus station where a Greyhound would take him to Philly, and invited me to come along. Fed up with being stationary, I agreed. Within the hour I was on a bus saying sayonara to the Deleware Water Gap and hello to the big city. 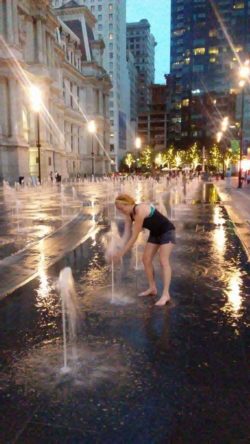 The hiker in her (un)natural habitat

Philly was great. I got my mind off my trail troubles by running around like a small child in the fountain outside the city hall. We stayed with some of Peregrines’ friends that night, and the next day got to walk around and see the sights. I even got to go to the art museum. Not to look at art, but to run up the stairs like Rocky. There was lots of running going on. 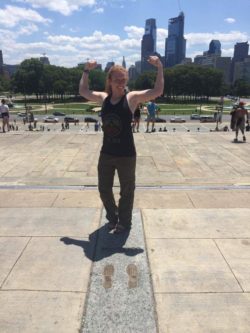 Over the course of these days I’ve learned a great deal.

First of all, there have been people out here that I don’t get along with. Sure, that’s a part of life right? One thing that doesn’t necessarily have to come with that is disliking those people. As I was walking along one day I had this epiphany, that just because our personalities might differ significantly doesn’t mean I should spend energy disliking them. It doesn’t mean that they aren’t a spectacular person. It simply means that we don’t get along, and there’s nothing wrong with that or sinister about it.

Secondly, shipping UPS is a bad idea, for reasons stated above.

Lastly, yes, I have been to the dark side of technology and I survived. To be completely honest, by the time I got my phone back I didn’t even miss it anymore. The worst part about the whole ordeal was not being able to take pictures. Yes, I was horribly upset at first. How was I going to check my instagram or facebook, or text messages? MY LIFE IS OVER WAHHHH. Newsflash; life doesn’t end when the phone gets turned off. I actually grew to really appreciate my time without a phone. I would sit to take breaks at these beautiful views, and stopped finding myself reaching for a device to hold my attention. My attention was exactly where it should be, on the beautiful places that surround me each and every day of my life. 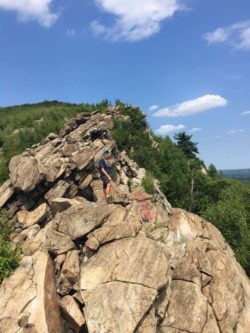 As always, you can follow me on instagram at erica.runs or shoot me an email at [email protected]!