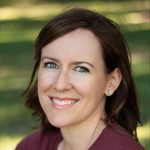 I don’t remember when I met Randy Fuller, aka Survivor, but I know when I said goodbye.

Last July, both of us were midway through our northbound Appalachian Trail thru-hike and he had joined up with members of my trail family somewhere in Pennsylvania. 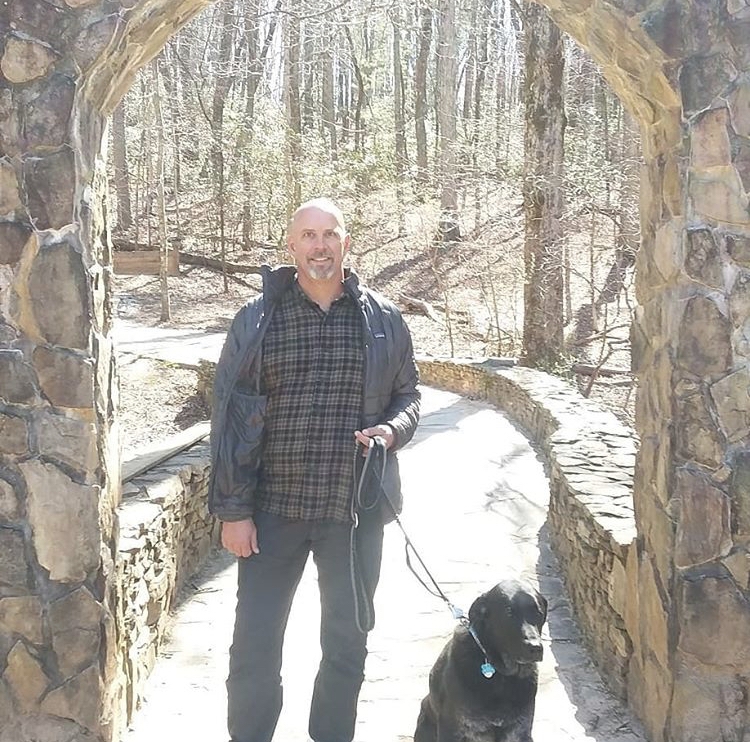 He had a compatible hiking style with our crew and joined us in representing the minority demographic of “middle-agers” out on the trail. Survivor struck me as steady, calm, and kind, and it didn’t surprise me that he stayed with our group an extra day (see below) when I broke my ankle and had to get off trail.

He even managed to perfectly frame the Scottish Inn hotel sign with his trekking poles in our quasi- summit photo that capped off my 2019 hike. 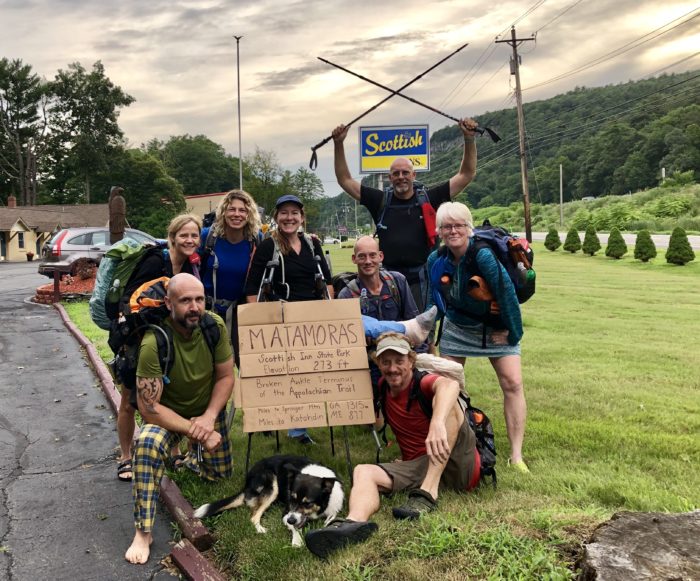 When you’ve survived a lot yourself, you don’t mind showing up for someone else. So there he was on my last day on trail, joining us for dinner and photos and moral support.

Before heading to the trail, Fuller knew all about trail names and hoped he’d get a good one. He made it to Blood Mountain on day four with his dog Gus, and when it came time to sign his name in the trail log at the shelter there, he didn’t want to sign his real name.

He told people there what he was doing on the AT, and the kind of losses he’d incurred. “Wow, you’ve survived a lot,” one of them said. “Actually, I’ve been thinking about the name Survivor,” Fuller said. And the name stuck.

Fuller grew up about an hour from Damascus, Virginia, in a town called Honaker. In his 20s he married the love of his life, Kosara, and they had three children. He’d always dreamed of hiking the Appalachian Trail, but knew as a young husband and father he’d have to wait.

Kosara was first diagnosed with a rare breast cancer in 2012, and for four-and-a-half years showed no symptoms. The cancer came back around Thanksgiving 2016, however, and in April 2017 she died.

Fuller’s youngest child had just left for college, and Kosara’s mother—who’d been living with them—died just six months later. In other words, in less than a year, he went from a household of at least four people (and more when the other two kids were home), to a household of one.

In late 2018, Fuller sold the house, and with his children’s blessing he made the decision to thru-hike the AT. While visiting his kids in Chattanooga he’d read about another hiker from 2018, a Trek blogger who specifically shared about “hiking with grief on the AT.”

He continued: “I knew it was time to make the dream come true. I’ve been responsible my whole life, and taken care of everyone else. I’ve been the best father and husband I could be. But my soul has taken some hits. I needed some healing in my life.”

A longtime Christian, Fuller said he especially identified with Psalm 23: “I’ve walked through the valley of the shadow of death—it was time for some still waters, time to have my soul restored.”

He and his family had lived in Charlotte, North Carolina for almost 30 years, where he’d worked most of that time as a manager at a garden center with an extensive gift shop that specialized in roses. He also volunteered in a leadership capacity in his local church, who supported his decision to take some time away with himself and God.

His kids were supportive, too: they’d all gone backpacking and camping together, and they knew their dad’s dream. 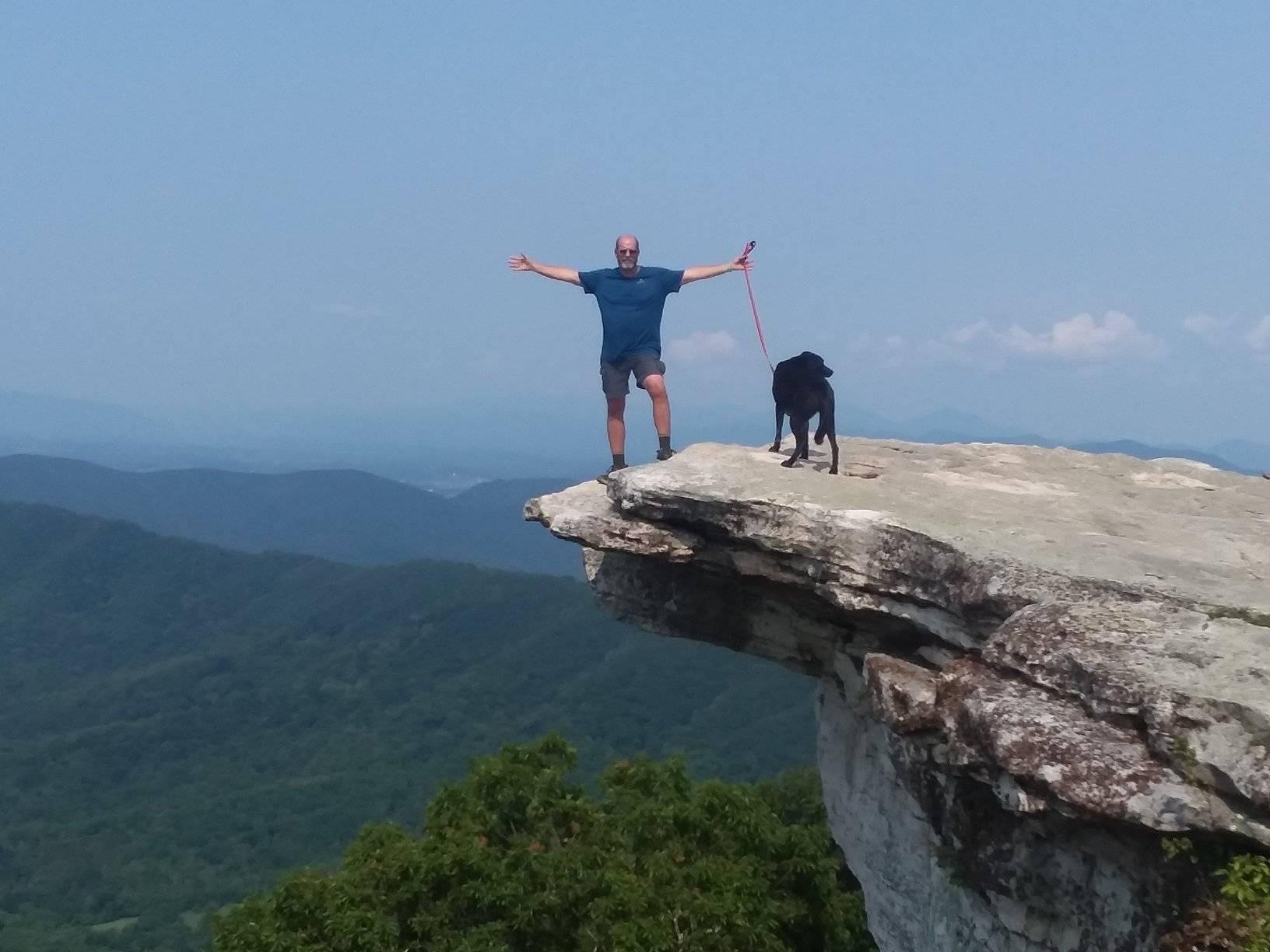 Once on the trail, Fuller loved it and said he knew from the beginning, “I’m gonna finish this.”

On Easter Sunday, though, his determination was tested. After days of wet, cold, snow, and mud, Fuller headed up through Max Patch and had a moment:

His wife, Kosara, had died the Sunday after Easter in 2017.

He hiked into Hot Springs and ate at a diner, and had this sense that Kosara was with him, and that all would be OK.

Fuller’s friend from church in Charlotte is a painter, and he asked her to paint a specific image for him from the trail.

It came to him while he was hiking through the White Mountains in New Hampshire, which he describes as so stressful and so hard. He felt thankful to have hiking buddies through that section.

It was cold, rainy, and exhausting—both physically and mentally. “There are so many rocks and roots, he said. “You have to halve your mileage out there, just like people warned.” He and his trail friends worried whether they were going to finish in time before the cold weather hit.

That’s when it hit him:

“There were times I sensed my pack wasn’t my pack—it was Kosara rolled up in a fetal position and I was carrying her on my back. She was always the most supportive person in my life, and she’d given me her blessing for this.” 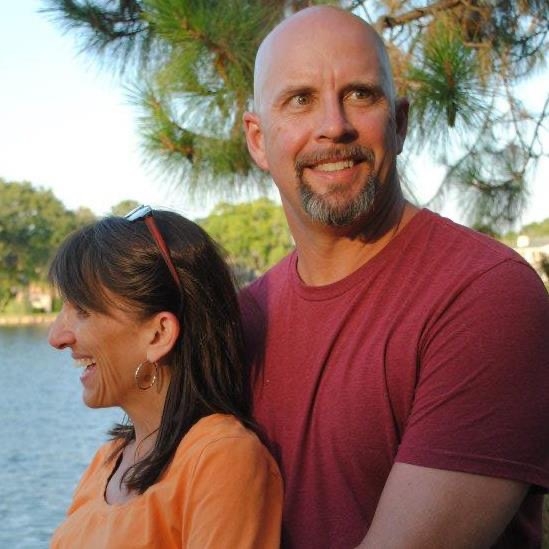 He asked one of his artist friends to paint a rendering of this image, a powerful vision that she is with him and willing him strength and good vibes.

He also found solace in Wendell Berry’s poem, The Peace of Wild Things:

When despair for the world grows in me / and I wake in the night at the least sound / in fear of what my life and my children’s lives may be, / I go and lie down where the wood drake / rests in his beauty on the water, and the great heron feeds. / I come into the peace of wild things / who do not tax their lives with forethought / of grief. I come into the presence of still water. / And I feel above me the day-blind stars / waiting with their light. For a time / I rest in the grace of the world, and am free.

“I felt so crushed and helpless,” Fuller said, “and I knew I needed God. He was with me in that hardest time of my life. People say, ‘Be gentle with yourself and don’t judge yourself harshly when you’re going through grief.’ The Hebrew prophet Isaiah says, ‘The bruised reed God will not break and the smoldering wick he will not quench,'” but there were times Fuller wondered how to keep the light burning.

Another Scripture that sustained him after Kosara’s death came from Psalm 32:18: The Lord is close to those who are broken-hearted and saves those who are crushed in spirit.

Survivor’s before and after photos are striking. Having been somewhat on the heavier for most of his life, Fuller said, “I was 235 pounds when I started, and down to 185 by the end.”

Some people didn’t even recognize him when he came back home!

“Oh my gosh,” one woman from Buena Vista, Georgia, told him when he visited there after his hike. “You need to eat a biscuit and put some gravy on it!”

He has since put on about 15 pounds, but keeps the rest off by avoiding carbs and eating healthy unprocessed food.

His daughter thinks the weight loss is hilarious. When he flew to Chattanooga for his son’s birthday, all he had on him were a fanny pack, toothbrush, and duct-tape wallet. She laughed: “We pick you up at the airport, and you’re like a hobo!”

“How have you changed since the hike?” I asked Survivor.

He said: “I’ve never been a die-hard career guy. I never took a high-pressure job, because I couldn’t bear to not be around my family.

“And I’ve always wondered if I made the right call.

“On the trail I realized I do not regret that decision at all. I don’t regret not making a boatload of money.

“I’m also a little calmer now and not so worried about the details. I learned that the trail provides and things work out.”

A Word to Others in Grief

To someone else in his shoes: middle-aged, bereaved, and contemplating a thru-hike, Fuller would say:

He started March 22, 2019, and a few of the friends he met that day summited Mount Katahdin with him on September 30.

Would he do it all over again?

He now works at the Mast General Outfitter Store in Roanoke, Virginia, so he can help others prepare for their outdoor adventures.

Congratulations, Survivor. May your story inspire others to keep walking in the midst of loss, and to bravely summit new dreams.

I began thru-hiking the Appalachian Trail north-bound in March of 2019. With steep climbs and even steeper learning curves, the AT was everything I'd hoped it would be— until four months in, I broke my ankle in New Jersey. I returned the last two summers (2020-2021) for another six weeks and logged 400 more miles of rocks, roots, rattlesnakes, trailer-hostels, tornadoes, and trail friends. I’ve made it as far north as the border of Massachusetts and Vermont, and plan to finish the remainder of the trail during a sabbatical in 2023. In my other life I’m a minister at the Woodstock Reformed Church in Woodstock, New York, where I also work at a bookstore and teach yoga. Come say “hi” if you’re in the area!