On Thru-hiking, Legacies, and a Little Bit of Guilt

Thru-hiking is, at the end of the day, a pretty self-centered act. It is about me and it benefits only me in the grand scheme of things. It certainly doesn’t benefit my parents, who are spending my last month shuttling me around to U-Haul stores and listening to inane chatter about socks. It doesn’t benefit my job who is losing, at least in my opinion, a valuable employee. It doesn’t benefit my landlord, who is losing a quiet tenant who always pays rent on time. It doesn’t even really benefit the Appalachian Trail itself, given that I will be spending my entire hike trying to mitigate my environmental and ecological impact on the trail (leave no trace, guys).

None of this bothered me until recently.

My last name is, and pretty plainly announces itself to be, Armenian. Even at the age where I was embarrassed by the things that made me unique, I really liked it. I secretly enjoyed when substitutes struggled over it during roll call. I love that it has four Os, a characteristic I imagine it shares with only a handful of other last names in existence. I loved spelling it out loud when I was a kid. It gave the same satisfactory feeling as spelling out “Mississippi”.

The irony of it all is that it’s probably not even my family’s last name. Like many other families, it got a bit messed up at Ellis island, when my great-grandfather and his brothers came through and explained that they were sons of threadmakers (or bourouji). Whatever it was before is now lost, and frankly, not really relevant. We are Booroojians now.

All four of my great-grandparents on my father’s side came through Ellis island, all separately and within a couple of years of each other. They all left around 1915 when, under the cover of the first World War, Turkey committed a genocide known as the Armenian Massacre. Their reasons varied, some leaving early on premonition, some forced out through the most brutal means possible. The intent was annihilation of the Armenians, and my great grandparents defied this simply by escaping and continuing to exist, by meeting each other, falling in love and creating a flock of descendants that all live productive lives in America, untouched by the kind of hatred and violence my great-grandparents endured.

My great-grandmother on my grandfather’s side was the only one of the four to survive one of the death marches. Better to not spend much of my time outlining the grotesqueness of exactly what that was; I think the name does enough of the job itself. My grandfather was told very little of her experiences, understandably so. It would have been a terrible thing for her legacy to revolve around the worst things that had happened to her.

I’ve been thinking a lot about her legacy lately because, for better or for worse, my entire family is it. Our existence is the result of her greatest act of strength and her perseverance in the face of those that would rather she did not. Her legacy was my grandfather, his surly wit, his mustache, his job at the IRS and his enduring love of my cousins and I. Her legacy is my dad’s accounting degree which led him to meet the large-eyed and large-haired (it was the 80s) lady accountant that became my mother. Her legacy is my older brother’s kind heart and love of Pink Floyd. Her legacy is my younger brother’s college film thesis and his fascination with droning. Her legacy is this picture from a trip my brothers, cousins and I took to Disneyland where my brother forgot exactly where Space Mountain took your picture. 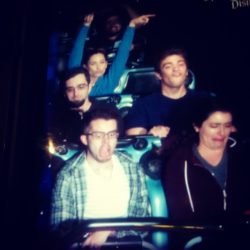 Her legacy will also be every step I take on the Appalachian Trail. All of these things can exist because my great-grandmother continued to do so despite overwhelming odds against her.

You’re probably wondering what any of this has to do with thru-hiking and why it belongs here. I’m bringing it around, I promise.

You see, if you strip it all down, my great grandparents were refugees from a Middle Eastern country who wanted nothing more than to keep existing. Their legacy hinged on the fact that they found a country which allowed that for them. If they hadn’t been able to come to the United States, they likely would have died, as did innumerable others. Their legacy, from my grandfather’s moustache to my dad’s accounting degree to that picture at Disneyland to my thru-hike of the Appalachian Trail, would have ceased to exist.

It shouldn’t be political to say that the day the current administration created and signed an executive order that stripped away the legacies of countless other families like mine was a heartbreaking one for me, but it is. It made me look at my thru-hike in a different light. Every step of it is owed to the steps my great-grandmother took. I ought to do what I can for those like her.

It started to feel selfish to continue with my thru hike. I thought maybe I should stay somewhere my voice could be heard and counted. I thought maybe all the money I had spent years saving could benefit organizations I knew would need it in the coming four years.

I wish I was a selfless enough person to go through with that sacrifice, but unfortunately, I’m not. I want to attempt a thru hike more than I can possibly put into words. But if I am going to attempt it, I figured I ought to at least try to make it benefit someone other than me.

I had seen other people turn their hikes into fundraisers for causes they cared about. There’s a great post on how to do that here. I have become inspired to do the same.

So I decided to hike for the International Rescue Committee. Their website is here. My fundraiser is here, and will be maintained throughout my hike by me and that incredibly kind-hearted brother of mine. Feel free to donate if you are so inclined, or share if you are inclined to donate but unable to do so.

This should be about a lot of things, but it’s largely to help me sleep at night. And it’s already hard to sleep in a tent on the ground when it’s freezing out.