Tick Season Is Approaching, Here’s What You Need to Know

While thru-hiking the AT last year, I called a Lyft in New York. The driver seemed a little flummoxed by my stinky, mud-covered presence and didn’t know much about the Appalachian Trail, but he was fascinated by the subject. At one point, we began discussing a tick I had found burrowed into my hand one morning the week before. It had been tiny, barely the size of my smallest freckle. If it had snacked on any part of me I looked at less often than the back of my hand, I couldn’t have imagined ever finding it. “I saw it and popped it right out,” I explained.

“No, no, no!” The driver was looking at me through the rearview so intently I’m certain he would’ve plowed through any deer that ventured onto the road. “Did you make sure you got all of it? The head, too? Because it can break in half if you don’t pull it out right and could still give you Lyme. Did you get a rash? You can still get Lyme without the rash, you know.” The point is, you don’t have to be a backpacker to be concerned about Lyme in the northeastern United States right now. Cases have been steadily rising in the last 25 years. Here’s a map of reported cases in 2001: 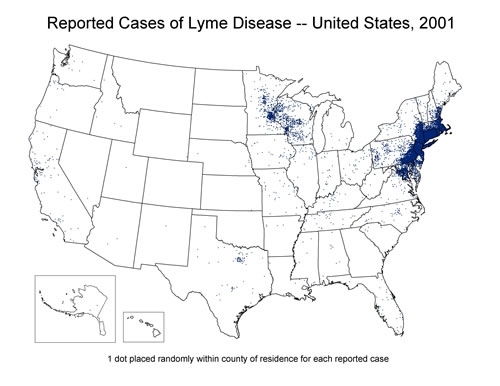 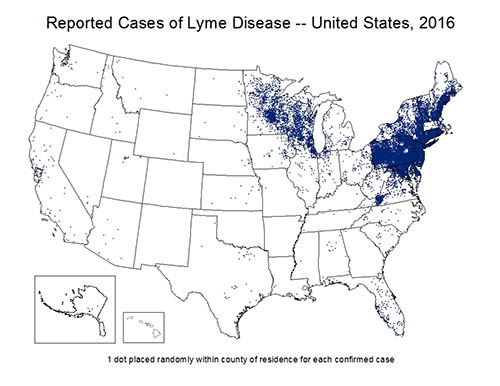 AT thru-hikers need to be more careful than most. Both NOBO and SOBO hikers spend the height of tick season in areas where ticks and Lyme are most prevalent. As the driver so passionately pointed out, not all bites yield the telltale bull’s-eye rash. Many of the early signs of the disease like fatigue, headache, and muscle and joint soreness would go unnoticed by thru-hikers already dealing with all of those. Showers and laundry are few and far between, meaning a tick could get real comfy if a thru-hiker isn’t on the lookout. And if the disease is left unchecked and untreated, the infection can spread to the joints, heart, and nervous system. And Lyme disease isn’t the only tick-borne illness out there, just the most common – and the others are on the rise, too. There are 14 tick transmitted diseases in the U.S., to be exact. Here’s the results of a study that tested how many ticks were carrying diseases in the Hudson Valley area of New York: over half were carrying Lyme disease and, horrifyingly, ten of the ticks tested had a combo platter of three different diseases.

The CDC hasn’t released any data on 2017 cases yet. Most people go to their own doctor to be tested and treated, and doctors don’t have to report cases to the CDC. That’s why the number of reported cases per year (30,000) is almost ten times lower than the projected cases each year (300,000), which means it takes some time for the CDC to get its official count. There is no confirmed reason why the tick population is growing—theories range from climate change to expanding suburbs—but 2017 was projected to be a big year for ticks before it even started. That’s because 2015 was a mast year for acorns, which means the proceeding years were great years for acorn-eating mice and consequentially, mice-blood eating ticks.

The strongest defense against ticks is a thorough tick check every night. In most cases, the tick must be attached for 36 to 48 hours before Lyme can be transmitted, so as long as you’re checking for and removing ticks nightly, it’s unlikely any bite could result in transmission. Check clothes as well as your body, and consider wearing light-colored clothing, which makes ticks easier to spot. The CDC website specifically says to check these areas:

–In and around the ears.

–Inside your belly button.

–The back of the knees.

–In and around your hair.

The CDC also recently released the results of a study on the efficacy of Permethrin, a tick-repellent spray that can be used to treat packs, clothing, tents, etc. The test involved letting ticks crawl all over brave volunteers for the entirety of a full-length movie and showed that the stuff is pretty effective, so consider treating your gear upon hitting tick country.

In more exciting news, a French company called Valneva is in the process of developing a vaccine for Lyme disease. The vaccine just passed its first phase of medical testing, which involves small groups of 20 to 100 volunteers and is meant to test the safety of the vaccine. The second phase, which tests the efficacy of the drug, begins next, which means the drug is still a ways away from commercial use. But given the rapid rise of Lyme infections, it’s worth rooting for.

The CDC website has a ton of resources dedicated to Lyme disease prevention, symptoms. and statistics, among other things. It can be found here.