Parenting in the Woods: The Changing Parent/Child Dynamic During a Thru-Hike

“How has the trail changed you?”

This is probably one of the most frequently asked questions thru-hikers field during and after their hike.

It will come as no surprise to hear that many people who endeavor a thru-hike do so with the purpose of affecting significant change in their lives. Whether it is overcoming addiction, reintegration after military service or time in prison, dealing with life-changing circumstances, critical illness, recovery, loss of a loved one, retirement, divorce, unemployment, weight loss, or self-discovery—a thru-hike is a powerful catalyst for change. What may be surprising is that a thru-hike can even change those individuals who harbor no such intentions.

Last year, fate, fortune, and generosity afforded my son and me the opportunity to thru-hike the Appalachian Trail. We designated our thru-hike as a modern-day “Right of Passage” for my 14-year-old. Change was on the horizon for the boy, and as for me, I would draw on my experience as an outdoorsman, educator, and parent and act as a nurturing guide.

The increasing numbers of kids and teens attempting thru-hikes can be attributed to the shifting school calendars across the country and world, as well as the growing popularity of alternative education, including homeschooling and remote schooling. As for us, we decided as a family that the inner-city school situation in London was not addressing the social and intellectual needs of our son. We decided to try homeschooling for one year. For half the year, we followed a broad college prep curriculum. However, after a geography project on the Appalachian Trail, our son proposed that we hike the trail. Six months later we were in Georgia.

Thru-hiking with kids is nothing new, but it is still relatively uncommon. With each passing year, increasing numbers of parents and caregivers are attempting thru-hikes with their children. While on our thru-hike we knew of a half-dozen kids hiking with their parents. We even heard news of a couple traveling north with an infant. For the past decade, there have been several families hiking with kids under ten years of age. Yet despite the increasing numbers, kids still represent a small percentage of thru-hikers.

“Your Parents Are So Cool.” 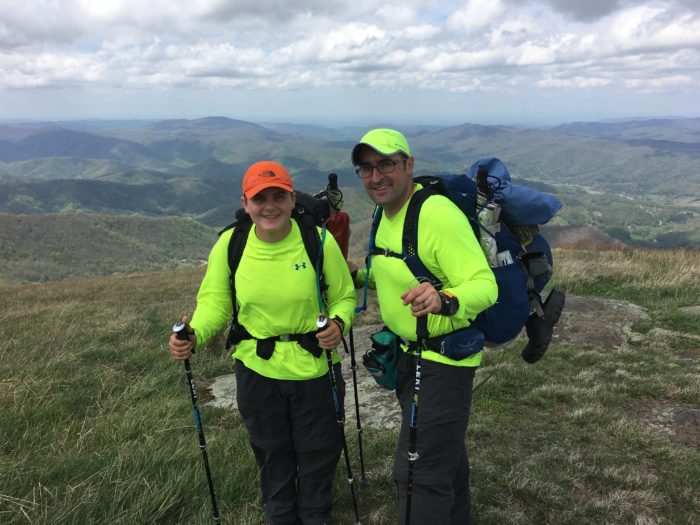 The author with his son during their AT thru-hike.

My son would hear that a lot from other hikers along the AT. He would scoff, but I did not mind hearing it. For many people, when you learn you are going to be a parent, you formulate the fantasy that you are going to single-handedly reinvent parenting. You are going to be the “cool” parent. You’re going to be more of a “friend” than a parent. That works pretty well until your kid pulls your laptop off your desk for the first time—yes, it happens more than once.

Out of experience and circumstance, one develops a parenting style—a set of tools and strategies with which you manage your children’s behavior. Kids will take cues from their parents. They will rely on their parent’s behavior to predict how their parents will act or react and use this to gauge their own behavior.  Asking my children about my own style of parenting before the hike, they described it as “fluctuating,” “it runs hot and cold,” “strict with high expectations and passionate opinions one moment while being very relaxed, supportive, and sensitive the next.”

Fourteen-year-old 2017 flip-flopper twins Blue Dolphin and Yoda described their mother Mountain Mama’s pre-hike parenting as “nurturing and strict on some aspects. She let us do our own thing. She was always quick to correct us.”

Many people share the notion that a thru-hike is a romantic, spiritual endeavor that involves communing with nature and in turn “finding yourself.” A greater number still look at the trail as a way to change some significant character flaw in their personality or redirect where their life is heading. The overarching themes of a thru-hike are overcoming adversity and meeting challenges. Thru-hikers are faced with the raw and brutal realization of what they are capable of, and where their limitations lie. The result of such intense experience is not finding oneself, but seeing themselves laid bare and affirming oneself–the good with the bad.

As a parent on a thru-hike, the challenge presented by nature is interpreted as a threat against which you must guard your child. Any self-preservation is rooted in retaining the ability to protect them. Risk is assessed based on how it will affect your child. It is a great limiting force that modifies the parent’s thru-hiking experience.

Children Are Stronger than You Think 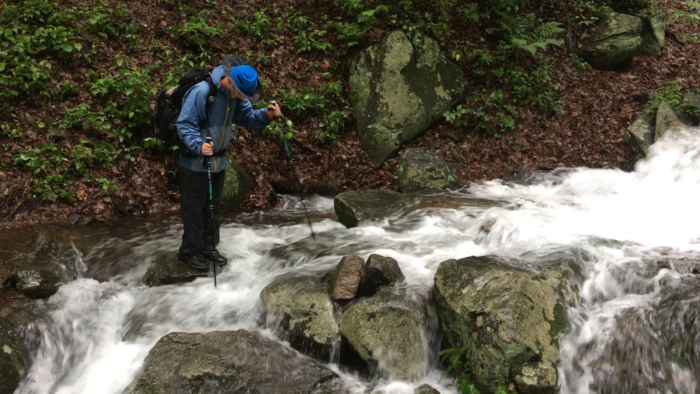 After discussing the challenges of long-distance hiking with children with other caregivers, we agreed that any palatable change was rooted in how parents regarded their children. There was a universal and undeniable recognition that their children grew beyond any presumed limitations that their parents harbored for them. Parents were surprised to learn how heavily they could rely on their children in every aspect of the journey.

2017 thru-hiker Squire said what most surprised him about his 12- and 14-year-old boys on their thru-hike was “their resiliency.”

Mountain Mama said what surprised her about her 14-year-old twins was “How strong they are! I was extremely doubtful that they would last. Now they have plans to thru-hike alone after high school and I am fully supportive and know they can do it.”

On our own thru-hike, I can cite several times when my son quite literally saved my life. His intuition and maturity and growing experience allowed him to recognize in me the symptoms and signs of illness or danger. Other times, he was able to offer sensible alternatives when I could only see one resolution. Hiking through, Low Gap, I was feeling rather low. I didn’t realize I was shivering or acting a bit loopy. Luckily, my son noticed these symptoms and quickly treated me for the early stages of hypothermia. He insisted that I add layers, while he cooked us a warm meal. He then led us for the next several miles of the hike until I came back into myself.

On another occasion, he saved the day by resolving an impossible resupply. Harpers Ferry pulls countless NOBOs north, but there are few resupply options in town. All of the local shuttle drivers refused to bring us to the nearest supermarket eight miles away. On an off chance, we tried an internet car service. I thought we were lucky, until we arrived at the market, when our driver told us that the service did not regularly operate in the area and we caught him merely by chance as he was on an extra long fare from Dulles Airport. In short, we were going to be stranded at the market. I retried the shuttle drivers, with no luck. I was unable to find a solution other than try to hitchhike, which we weren’t any good at. My son had the brilliant, yet obvious idea to ask the driver to wait for us while we quickly shopped. Brilliant in its simplicity, the idea escaped me entirely. I am also convinced that the request coming from the boy had more impact then if it had occurred to me.

All of the parents with whom I spoke cited the change in their children, specifically, how they grew into capable young adults, partners with their parents. This, as it was for my son’s thru-hike, was an intended—or at least anticipated—outcome for the journey. What was not intended (and was just as exciting) was how many of the caregivers’ parenting styles changed in direct proportion with their children’s empowerment.  Mountain Mama said, “We became more of a team, almost on equal levels. The hike was very challenging for me, so I couldn’t have done it if I was having to do a lot of parenting or caregiving on top of it. I had to take care of myself! Luckily, my girls are very capable and are stronger hikers than I am, so this was easy to do.”

Parents Can Change as Much as Their Children 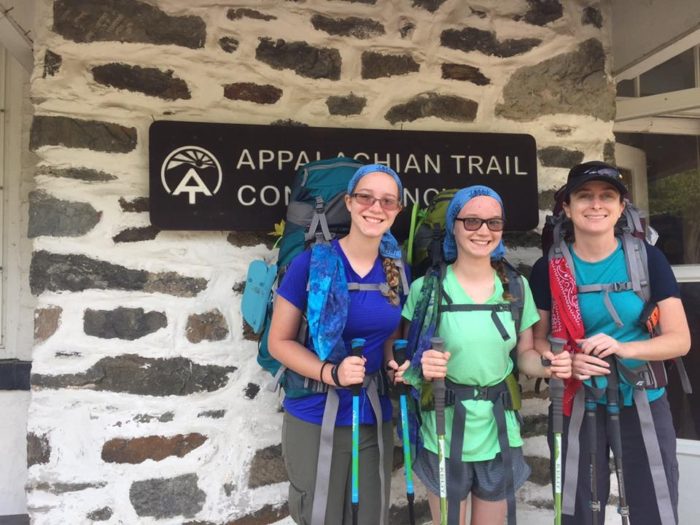 When asked if her mother’s parenting changed during the hike, flip-flop twin Blue Dolphin said, “I think it did. My sister and I were more depended upon, because we needed all of our input and independence to get through each day. We were allowed different freedoms because of it, and she depended on us more than at home.”

“She didn’t lose her temper as much,” added Yoda.

My own son said that during and after our hike “Dad used to be much more overbearing.”

As a parent you learn to take the little victories. 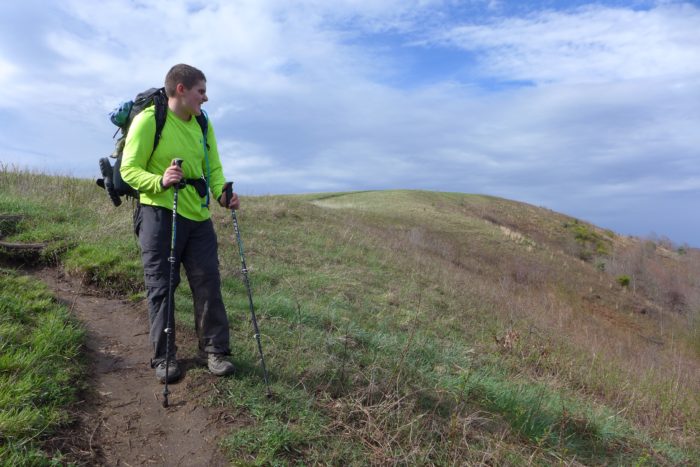 It is extremely rewarding to watch your child grow up through the intensity and adversity of a thru-hike. It is a rare gift in which few parents can share. It must, however, be cherished while being mindful. Despite the maturity, growth, and equality that you now share with your child, remember that they are still children. You must allow them those opportunities to be kids—to feel things like a child—to be foolish, scared, adventurous, and awe-inspired.

If you are fortunate, you can share in their wonder and find your own innocence through them.

In follow-up articles, we’ll further explore the subject of family thru-hikes, including the psychological toll thru-hiking has on children and adolescents, the logistics of fulfilling educational requirements, and how to handle the inappropriate or dangerous occurrences along the way.