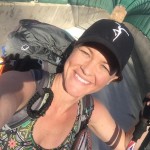 Thumbs Up: Hitchhiking on the Appalachian Trail

Two months have passed since the completion of my thru-hike. Let me tell you, I still think about the hike on a daily basis and the more I think about it, the more I can’t believe I spent seven months out there in the woods.

One of the most common questions upon return has been: what was your favorite part of the hike? I kind of cringe at that question, but I also appreciate being asked about the hike. The thing is there are so many answers: the people I met, the sunrises/sunsets, the different layers of the forest as I climbed, the different types of terrain (especially up in New England), the zeroes…see what I mean? All of it was my favorite. And I am not just romanticizing the hike. I am fully aware that there were lots of tears. Lots of days where I questioned what the hell I was doing. Lots of too hot, too cold, too tired, too much rain, too much humidity, too much-I don’t wanna.

So when asked, “what was your favorite part of the hike?” it is truly an impossible question. All of it. That’s my favorite. But that answer doesn’t give listening ears and curious minds the snippet into the hike they are looking for when asking that question. I’ve found that one of my favorite ways to answer the question is to say, all of it, list some of those things I mentioned above, and then talk about the one thing I loved and least expected/thought about being a part of my hike: Hitching into and out of town.

Obviously, I knew going into the hike that I would have to get back and forth into town to resupply, but I really didn’t put much thought into what that would look like. I knew there were shuttle services, that hitchhiking was also an option, and that was that. So when the time came for my first resupply I turned to FarOut (GutHook back then) texted a shuttle from the gap and waited patiently for my ride to arrive and did the same leaving town. I was always with other hikers so we split the cost of the shuttles. I also want to note that I appreciate that shuttling hikers is an income revenue for many that live in the trail towns.

I can’t remember my first hitch, but I am fairly confident it was somewhere in the very north of Georgia or North Carolina. I also know that once I caught my first hitch, I never went back to shuttles. I LOVED hitching. It almost felt like more of an adventure than the actual hike itself. It takes a certain type of person to stop and pick up a smelly, dirty hiker. Another adventurous soul. The thing is, most of the time the people who stopped to pick me up either lived near the trail or were also hikers themselves, and so they were familiar with what we were doing out there. There were exceptions to that though.

I remember one lady who slammed her brakes on in the middle of the road to pick me and Snacks up. It was a twisty, bendy mountain road and she just stopped right in the middle of it. As I ran to the little SUV, I remember thinking holy shit this person is crazy stopping in the middle of a bend, in the middle of the road, and I hustled to jump in the vehicle as quickly as possible before another car came whizzing along. When I opened the back door to jump in and realized there was a practically newborn baby in the backseat, well, I holy shitted a few more times (in my head). When I explained we were hiking the AT and trying to get into town to resupply our food, she nodded and said she could take us. Well, a few minutes into the ride, stinking to high hell, the stank started to permeate her SUV and she turned to me and said she was turning at the next road and would have to let us out there. The stank went unspoken, politeness, but we knew what was happening. We jumped out when she stopped a minute later, gushed our gratitude and apologies for the smell, and stuck our thumbs back out and waited for the next brave soul to come along. It always did.

Some people are horrified when they hear I hitchhiked in and out of towns up and down the east coast. They often ask if I was carrying a gun for protection. I was definitely not carrying a gun. If anything, I was the one that people were leery of rather than vice versa. That said, I do recognize that having Snacks with me as a hiking partner alleviated a large part of that sense of danger- for both of us. I did hitch on my own early on in the hike, but for the most part, Snacks was always with me. We knew that me, being a female, made hitching a bazillion times easier. Snacks often wanted to hide in the bushes and leave me to it, only to jump out when a hitch stopped, but we never actually did that, haha. I did always take the first-in-sight position along the road though. We knew.

If it was a pickup we always threw our packs in the bed of the truck and then jumped in behind them. Occasionally, people invited us to take a real seat and if it was a car or SUV we had to get inside we were always very upfront before entering that it had been _xx_ days without showering and we stank to high hell and apologized profusely about the crime we were about to commit against their nasal passages. Most were understanding and laughed. Occasionally, a few minutes into the ride the hitch would exclaim- y’all do smell, dontcha! We would all laugh and Snacks and I would give each other a look, knowing we were both hoping they’d hold their breath and take us all the way to town.

For the most part, we got hitches within the first 10 to 20 minutes, sometimes longer, but we knew patience was the name of the game in the longer waiting cases. Now and then we would end up road walking for a few miles, either to stay warm, or to get to the next (hopefully busy) road intersection. Road walking is tough on the feet, knees, and joints. The pavement is not kind to those, but even in a road walk we managed to see the flip side. Looking up at the mountains we had descended from, seeing the views from another angle. It all adds up to the memory of the hike.

The people we met hitching are characters in our story. There are so many of them. I often joked to Snacks that I was going to have to get a license plate tattooed on my thumb. I am so very grateful to everyone who stopped to help us along the way. I vowed to the universe with every successful hitch, that one day, I would be the one stopping to pick up a smelly dirty hiker-something I look forward to doing when the opportunity presents itself.

-Zipsss (pics of hitching below!) 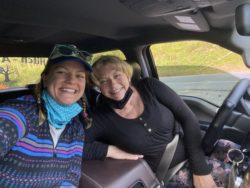 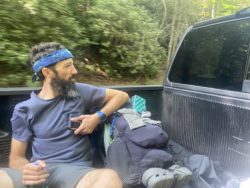 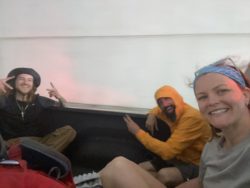 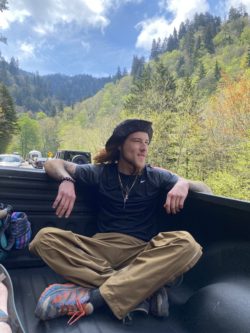 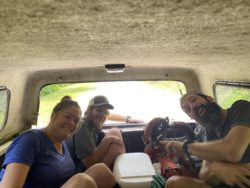 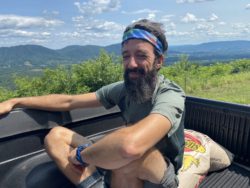 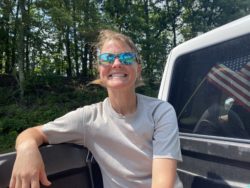 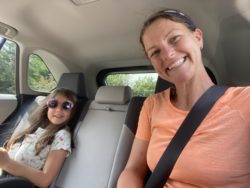 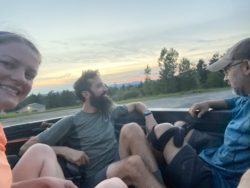 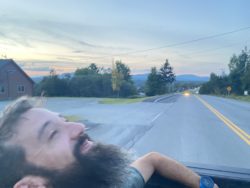 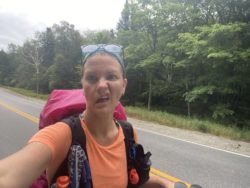 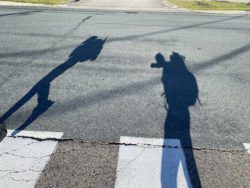 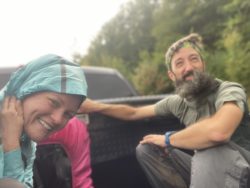 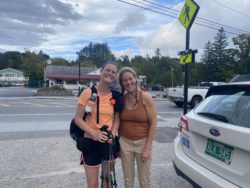 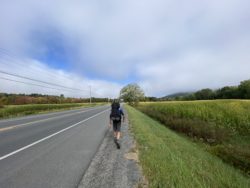 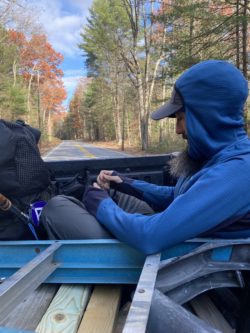 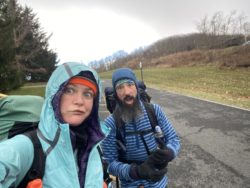 Hiya Hikers! In the Spring of 2021, I sold almost all of my possessions, including my condo and wheels. Then I resigned from my career in bank management and set off on my AT Thru-Hike, which I completed December 5th 2021. I'm now in England, spending time with my grandparents here and figuring out my next adventure. Thanks for reading and if you'd like to follow along on my adventures, please follow me on IG @annemariesphere.