I woke up at 5am from another hiker burping loudly. I couldn’t go back to sleep, so I started packing up a little after 6am. Trinket was already packed up and making breakfast in the shelter. Bear Sweatz and his wife were out early. I got on the trail at the far end of the blue blaze loop since I walked it last night to check out the water, and Rash and Piñata went to the first entrance and then filled up at the stream.

I was feeling good hiking in the morning. We had 2 very long climbs to do, and I powered up the first one. There were ledges on top with a huge drop, and I planned to eat lunch there. To my dismay, there was a fence blocking the rocks for falcon nesting. I ate lunch outside the fence, and Rash and Piñata joined me.

It started raining lightly on the descent, and then harder as I got to the bottom. I stopped to put my rain jacket on, then had to stop and take it off because it was hot. I started up the second huge climb, but I felt like I was out of energy from the first climb. Part of the climb was walking on slanted rocks, and I fell, landing on my wrist. My hand was numb, and I found a rock to rest on covered by trees so I had some shelter from the rain.

A hiker my age named Philippe came by who’s from Nice, France, and I hiked with him to the fire tower. He started yesterday and I recognized him from the shelter last night. He came in late, put his pack in the shelter, and pitched his tent. He has plans to do GR 20 in Corsica in a few months. The hiking went faster with company. The rain had since stopped, and Rash and Piñata came from the shelter over to the fire tower as Philippe and I climbed to the top. We convinced Rash to come to the top, and him and Piñata made it up for pictures. I gave Philippe the temporary trail name of Violet, and Rash, Piñata, and I hiked out.

The downhill from the fire tower was easy, but the climb afterwards was horrible. It was raining again, and I had no energy left. I took it slow, and stopped to get snacks out since I felt lightheaded. I slipped again on a slanted rock, this time hitting my forearms and elbow. I was dead tired, cold, wet, and wanted the hike to be over. I found Rash and Piñata at the water source right after the blue blaze to the shelter, and I filled up. Violet joined us. The rain had thankfully stopped. We all went up the steep 0.2-0.3 blue blaze trail to the shelter, and found lots of familiar faces in the shelter, among them Alps and Powerhouse. Rash, Piñata, and I set up our hammocks just as the rain started coming down hard. We cooked dinner under our tarps, and Rash joined me under mine since his was too low to the ground. 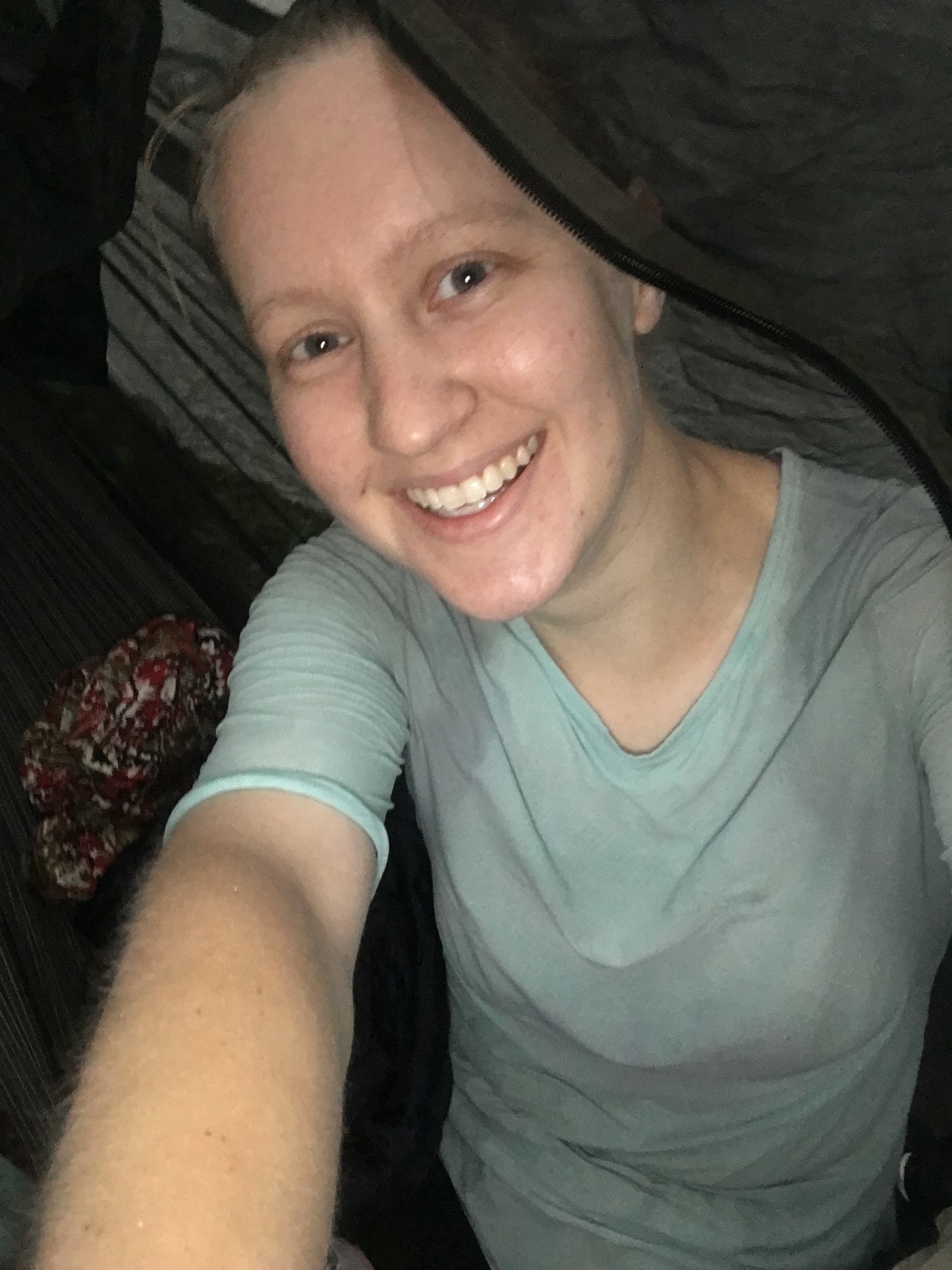 Selfie in my hammock, safe under my tarp

It was raining hard when I went to bed around 9pm. I woke up at 1am to thunder and lightning. It was the first thunderstorm I’ve experienced in my hammock. It made me feel small under my thin tarp with the thunder crashing overhead. The storm lasted less than an hour, but I didn’t go back to sleep after it was over. It was still raining, and I was too distracted listening to the rain and thinking about seeing Louis.

Rash and Piñata got up at 4am and were on the trail by 5am. I was up when they left, but was moving slowly, and got out a few minutes before 6am- the earliest I’ve been on trail. It was still raining when I left. The 0.3 mile steep blue blaze down to the trail was a small river. The real trail wasn’t much better. The stream where we got water last night went from a calm stream with a few small waterfalls to a raging beast. It reminded me of when it rained in the Shenandoahs.

The entire trail was intermittently flooded with rivers washing down it. I climbed the rest of the way to Mt Cube by 7:30am, and found one of the prettiest views at the top. There were fluffy clouds dotting the mountains and a gorgeous slightly pale pink sky. The top of the mountain was huge rocks that looked like granite or marble, and they were incredibly slick. They were much slipperier than other rocks I’ve walked on in the rain. I had some near falls, but thankfully nothing bad. I took the ascent at a safe glacier’s pace of 1.2 mph.

It had stopped raining by the time I got to the summit, but the leaves were still covered in water, and the slightest brush against them covered me in water. The trail was peppered with more flooded areas, and in some cases they were over a foot deep. I tried walking around, but I would get hit in the face with wet branches. Ignoring the flooding and wet pine trees, the forest was beautiful. It was full of evergreens and pale green mosses, and the trail was littered with soft pine needles.

On the descent, I met a day hiker who stopped to talk with me and give me a packet of Oreos! I had skipped breakfast to get on the trail early, and I didn’t realize how hungry I was. She said she hikes Mt Cube every week, and has never seen the rivers so flooded.

A little ways north, and I found the river she was speaking of. There were a few areas where it would have been easy to cross in low water, but the stones were covered in fast flowing current. I got halfway across on a log, and opted to get my shoes wet stepping on the stones the rest of the way. I found Geezer on the opposite bank. He said he camped near the river last night, and had to move his tent when the water level rose overnight.

After a few miles of hiking, I heard barking up ahead. I came across a large tent with food, a stove, and a man sitting with a boxer dog. The boxer’s name is Wilma and she was very sweet, and the man is known as the Omelette Man. He sets up his tent and waits for hikers to come by and cooks them omelettes. He also has juice, coffee, bananas, and cookies. He follows trail journals and knows which hikers are around his area. This is trail angeling at its finest. I didn’t have time to stay for an omelette, but I took a few bananas, a cookie, and pet Wilma for a few minutes.

A joke the Omelette Man wrote next to a pointy rock: “Sharp rock imported from Pennsylvania”

I was hurrying to get to the road to meet Louis, but I still had 7+ miles to go. My feet were soaked, and I was exhausted from lack of sleep. There was a road 5 miles before Glencliff, and I texted Louis from my Garmin asking him to meet me there to slackpack me the rest of the way. It took a while to go through, and he didn’t respond. I got to the road and sat near the trailhead, taking a break and eating my other banana. I waited for 15 minutes and didn’t see Louis, so I packed up my stuff to go. Just as I was standing up to leave, his car pulls off on the shoulder. He didn’t have service in Glencliff and got my message at the last minute. It was amazing to see him after 6 weeks, but I got back on the trail quickly to knock out the last 4.5 miles. I left him with my pack and just took my multipack with my cell phone and tracker.

I felt like I was flying up and down the mountains. I jogged part of the way, but I got tired on the uphills and walked. I tried jogging through the mud pits unsuccessfully, getting my shoes stuck in the murk, and had to carefully trudge through the muddy water. I burned through the miles in no time, and came to Louis’s car waiting with Rash and Piñata. We drove to get ice cream, which is always very important hiker business. Rash got one of the best cherry flavors I’ve ever had, Piñata got cookie dough, and Louis and I shared a waffle bowl with scoops of maple walnut, mint cookie, and moose tracks.

Picture by the moose at Moose Scoops

Rash and Piñata with their cones

We drove the hour to the Air B&B we rented, and the time passed quickly. The house was spotlessly clean and beautiful. Compared to the trucker motels we’ve been staying in, this was pure luxury. We immediately put our clothes in the washer and showered. It was still early in the day, so we lounged around watching TV, and ordered Indian food. It was pouring down rain, and Louis graciously drove to pick it up. By 7pm I couldn’t keep my eyes open, and went upstairs to bed while Rash, Piñata, and Louis stayed downstairs watching TV.

I woke up at 5am and peeked outside to find rain. I lounged in bed, enjoying the dry sheets and warm covers. Small luxuries become huge after being deprived of them for months on end. We went downstairs and watched TV until Rash and Piñata got up. We spent the morning relaxing and planning for the next couple days of hiking, then went to the grocery store around noon.

While shopping, I felt lightheaded and sick. I’ve felt this way before on zero days, and Piñata has echoed the same feelings. It passed, and we checked out and drove home. I made crunch wraps for lunch which were a hit, and we spent the evening watching TV and snacking on our grocery store purchases. I tried organizing my food for the next few days and a box to send ahead to Monson, but only got part way done.