My father drove us back from Damascus the next afternoon.  It was a long drive back up the curvy road we’d come down and I was a little sad, but I’d see him for his Birthday in a week.  I was really glad I had gone in to Damascus again because I was finally happy with all of my gear.  The walk to the shelter was quick.  Once there, I found out that there would be trail magic at the road the next morning. I was super excited and went to bed early so I could get there on time.

Reunion
It was going to be a long day, but in just 4 miles I could get my second breakfast at the road.  The walking was super easy and I got to the road in time to get picked up by the church group and shuttled to their church where they had an amazing breakfast waiting. They only do this breakfast every Monday so we totally lucked out on our timing.  They had eggs, potato casserole, pancakes, homemade maple syrup, and fruit butter.  They were also super nice so I hung out and charged my phone for sometime.  With about 9 miles left I decided I should get the next ride. There weren’t any water sources until the shelter so I filled up and walked on.  It was a chilly day so I couldn’t stop too long for anything.  It was mostly ridge walking except for an awkward one mile stretch on the side of a road that went over a highway and then a steep uphill.  When I got to the shelter and looked in I was surprised who I saw.  Firecracker, Mountain Goat (week 2), and Kodak (week 2) were there.  They were surprised I was there too.  After I made dinner and got water (a long walk downhill) I also found Dr. Cool-Aid Man who’d given me an ankle brace way back!   It was so cool to see them again until we were all told to be quiet and forced to go to bed.
That Creepy Dude 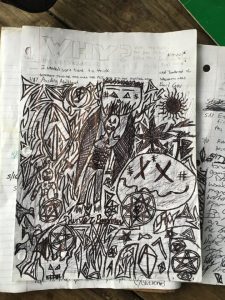 The next morning it was drizzling and I took my time getting ready and getting to know Earl Grey (another late riser).  I left and walked in the rain not seeing anyone except 2 slack packers and Earl Grey on two of my snack breaks. I was heading downhill from the 600 mile marker when I heard some stomping of feet and I got off the path to look back.  A man was running down the slope while smoking a cigarette.  He stopped and introduced himself as Hunter and asked how far the shelter was, then ran ahead. Just a fair warning this next part is a little weird.  I had gotten a weird vibe just from this small meeting and hoped he wasn’t going to be at the shelter but when I got there earl grey was there and reported Hunter was there as well.  I told earl grey I wasn’t feeling too well but wanted to push on because I was  nervous about this dude.  He told me I should keep walking and then Hunter returned.  The first question he asked us and apparently anyone else he met was “Do you have any weed?” (I have met several people who have reported meeting this dude since).  Then he started talking about how he was selling his car and needed a phone charger.  He continued to talk wildly of many things like trail days while he changed in a pair of jeans (not normal backpacker garb).  He was from Damascus was going to hike to Maine had started a week before Trail Days, hitched back home, then hitched back.  Earl Grey packed up his food and left and then I was alone with the crazy dude. I sat there staring at my book wondering what to do.  He asked me if I had a boyfriend or husband and I said I had a boyfriend in Texas. The Professor showed up and I decided to stay and Hunter asked if he was my boyfriend and I responded no.  I was unpacking my pack when he saw my down jacket and asked if he could try it on.  He grabbed it and reported it was “comfy”.  I was sketched out so leaving nothing valuable visible I took my phone down to where he said the water was (there was a much closer source which we didn’t find out till later).  I was down getting water when Uconn showed up and we discussed how neither of us felt safe he suggested to keep all of my stuff hidden since hunter had asked his girlfriend for weed, cigarettes, and a phone charger.  We got back to the shelter and Hunter was trying to stir Shadow Facts (Uconns girlfriend) ramen. Fish showed up and Hunter helped him steak his hammock and then started throwing up.  The professor said Hunter had smoked some synthetic morphine and that’s why he was vomiting.  We then noticed that Hunter had disappeared and left all his stuff.  We pondered if he would come back and what he was doing.  Fish said Hunter had asked him for weed, cigarettes, and where the closet road was.  We enjoyed him not being there and hoped he wouldn’t return but he came back sweating and said, “I went to run to get in shape, also to try and find weed and cigarettes”.  An older gentle man named Popeyi had arrived and Hunter called him a geezer and asked for pot and cigarettes.  He also said, “I’ve done Virginia”.  We were surprised and asked him more and he said, “yeah I’ve done Damascus to Blacksburg” (which is not a clear statement nor most of Virginia).  We all went to bed scared that night.  At two in the morning we were all awake listening to Hunter get sick in the woods, pack all his stuff, leave, come back, and unpack.  I looked over later and he seemed to be just sitting in the darkness.  He was the first to leave the next morning and all of us discussed how worried we had been that night.  Shadow facts had been worried he’d steal her food since he had said all he had were pop tarts.  The professor had slept with a knife. Popeyi even said that he’d been a weird dude.  So far that was the scariest night I’ve had!
Trent’s Grocery 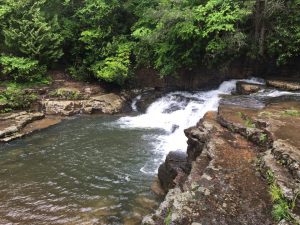 We all hoped we wouldn’t see Hunter again and packed up.  I heard several of the others talking about getting a hot lunch at Trent’s Grocery.  It was half a mile off the trail and I had a long day ahead but while coming down the only mountain of the day I couldn’t help thinking about warm pizza and how I couldn’t picture myself eating a tuna wrap that day.  Decision made, I walked up the road to Trent’s Grocery only to find the crowd from last night there who reported the store owners had seen Hunter trying to hitch earlier.  I ordered a burger and later a milk shake.  I also got a few snacks because their selection was awesome.  The extra mile round trip had been totally worth it.  After a long break I headed back up the trail and it started to rain.  I went to check out dismal falls which was pretty full (it added another half mile to my day).   Then me and an Popeyi had a dog follow us from there to the shelter.  We tried telling it to go home but it didn’t and we didn’t have cell service to call.  It was muddy but the forest was beautiful and it was all flat walking.  When I got to the shelter i set up my tent happy to have completed my longest day yet.
The Push

The next morning I had a late start and was only planning on going 9 miles to Docs Knob.  In the back of my head though I was thinking of trying to push 18 and meet my dad in Pearisburg one day earlier.  I didn’t have cell service to ask if he was available so I walked not knowing where my destination would be at the end of the day.  The climb up wasn’t bad and the ridge was mostly flat but rocky.  The first view was in fog but the sun came out for the next one.  I texted my dad and asked if he thought I could make it and he responded saying he was going to come drive out in an hour and hike towards me. With 10 miles left I started booking it because the service wasn’t good enough to text him back that I still had doubts.  I passed the shelter and with more confidence I called and told him to wait another hour but I should be at the road by 8 pm.  The last part of the hike was beautiful.  There were views at the power line and through the trees.  Right before angels rest I hit an amazing view which was then followed by the typical angels rest view of the factory.  I saw my dad in the last mile hiking towards me and excitedly we finished the long day together and ate at the Korean place on the way home to a warm bed, shower, and promises of slack packing.
< Previous Post
Next Post >