My last days in the Shenandoahs were unfortunately marked by anxiety. But at least there were some blackberry milkshakes.

I hadn’t been able to shake the sense of failure I had over that last long day where Xtra-Tuff had eaten her lunch for dinner, the last night I got to camp at 8 p.m. We were doing lower miles but my confidence and energy felt utterly depleted. I felt like a liability to the both of us. And this part might be hard to understand if you haven’t been on the trail, but there was something psychically taxing about hiking within spitting distance of Skyline Drive. It revved my feelings of anxiety and discomfort. It gave the trail a strange in-between quality, sort of like the suburbs. You’re not in a rural town or a big city, so where are you? Where do you want to be?

I found myself alone and crying only a few miles into one of the last days. Something in me was eroding. I wasn’t calming down. I wasn’t enjoying time on my own like I once had. I wasn’t loving this. It felt so backwards to hitch to the Wayside to collect my thoughts when the woods was where I expected that to happen, but that’s what I did. It was less than a week till Harpers Ferry and I was not sure what I was going to do. At nearly halfway, I felt like I should be amping up and getting excited. I shouldn’t be spiraling into what easily could have headed into a panic attack had I not hitched. The AT is a challenge; I’ve navigated that understanding time and time again. But this scared me. My brain felt like it was failing in a big way. This didn’t feel like a thing to push, this felt like a thing to sit down and slurp a milkshake though.

“Try to be mindful,” Xtra-tuff encouraged me before we split up for the day. I nodded in hopeful commitment. By this point, the thousand-mile mark was only a day or two away. I could do this. I would make it to Harpers Ferry. After that, I didn’t know, but that felt… all right. I took a deep breath, put on my pack, walked a few feet and stopped. There was a ray of sunshine spotlighting a leafy branch in the most beautiful way. I gave myself the time to look at it when I heard, “HEY BREEZY BREEZE!” It was Mothly Stud and Little Debbie, new friends from the shelter before who were section hiking from Damascus to Katahdin.

This is it. I thought, This is the moment I find a new crew to roll with and I stay on the AT forever. I mean, till Katahdin.

I’m going to break it to you now, it wasn’t that moment. But it was still a really awesome moment that allowed me to make the right decision for me: Get off the AT in Harpers Ferry.

Mothly Stud works in film and is by default, a great storyteller. Little Debbie is studying to be a therapist and uses her emotional insight and sense of humor to add details to Mothly’s stories and add an entertaining irreverence to her own poignant life tales. Artsy, funny and with a psychology twist? These were my kind of people and I loved them instantly.

“Have you ever been to a wedding?” Mothly Stud asked me before launching into The Story of My Sister’s Wedding. Mothly Stud dated his sister’s roommate and then her best friend before meeting Little Debbie. It was like something out of a movie he’s probably worked on. New girlfriend, two exes, a high stakes event, and of course, a swarm of opinionated family members.

Then it was Little Debbie’s turn to tell the I Spent Nine Months in South America and Fell into Something Like Love story. I was delighted to get to know them and felt privileged to be a part of their This One Time We Hiked the Appalachian Trail story. Until eventually, it was my turn to tell a story. “Why are you out here?” Mothly asked.

Not everyone gets the unabridged story of why I was out there. I usually get away with “I went to college in New Hampshire, hiked Mt. Washington, fell in love with the experience and started learning about the AT.” Actually, I think I’ve only told the “unabridged” story maybe… four times on the trail.

There is of course, more than one reason, but this is a big one. This is what I think of when people ask me: “I went to college in New Hampshire, hiked Mt. Washington, fell in love with the experience and started learning about the AT and then my boyfriend at the time wanted to get married and I said I would marry him after we hiked the AT together because I was twenty-one and I felt like I needed to do things like that. He agreed to that but eventually broke up with me. I moved to Alaska to figure myself out, he married someone else, and I realized I still wanted to hike the AT. So I am.”

There was a surprised silence. “What a bad ass.” Mothly said. In true therapist form, Little Debbie asked me how I was feeling about it all. “It was awful at the time. Like, no words awful, especially when he got married. But I’ve done a lot to work on it. Being out here, it helps. I feel pretty good now actually.” I am surprised I am able to say this and mean it. But the full impact of this moment will not hit me until I am home, until I am second guessing my decision to leave the AT. Until I flip through all of the memories I’ve made over the past two and a half months and reexamine my “I am Thru Hiking Because…” and  “When I Successfully thru Hike the AT I Will…” lists that the Appalachian Trials book encourages us to make. It’s when I look at my own handwriting I know I have been successful in reaching my goals. It’s just ~1,000 miles sooner than anticipated.

“I don’t know this man but you definitely won,” Little Debbie tells me. “You lived in Alaska! You’re hiking the AT!” Mothly Stud interjects. “It sounds like he just wanted to get married.” I nod, with the little I know about my ex’s life, yeah, it does sound like that. Little Debbie soliloquizes on “timelines” and “expectations” that society gives us and some of us take them on whether they are right for us or not. We hike on in a companionable agreement that we’re living the lives we want and how scary and wonderful it has been.

The next few days unravel quickly and without much emotion or fanfare. One thousand miles, the ATC Headquarters, seeing my Dad and brother. When I touch the elevation map at HQ I begin to sense the magnitude of what I’ve done but there is still an echoing sense of detachment. I did this. I definitely did this, but I don’t know what it means to have done this or what it would mean to keep doing this or to stop.

I look up posts on AppTrials for emotional support and insight but I know it comes down to me. How have I been feeling? What have I been missing? What has been making me happy? I pace the hotel room floor, pressing my thickly calloused toes into the carpet. My brother tells me he thinks I’m making the right decision. “Why?” I ask him. “Because the way I understood it, you were really unhappy.”

I leave Xtra-Tuff at the trailhead. We drive home. I eat six Krispy Kreme Donuts and three apples. I cry. I don’t belong home. I look up train tickets back to Harpers Ferry. But I don’t feel like I belong on the AT anymore either. I think about calling my old boss and asking for my job back. I shower and take stock of my bug bites. I don’t sleep.

I didn’t feel like Thoreau, I was beginning to feel like Sisyphus. I was hauling my butt up and over mountains relatively joylessly for the past two weeks. It was the community that kept me going. Not the trail, not the adventure. I was happiest at camp and it was because that was my “carry water, chop wood” time, my socialization time, and my reflection time.

I loved the lifestyle, the tribe feel, the simplicity, the hard work, the sharing, and the living with the land. Unlike, Thoreau, I want to spend more time on this life. But it became clear to me that I stopped needing to thru hike. I needed to figure out how to imbue my life with these aspects outside of the woods. That felt like the real challenge. Because the AT was going to end, and (hopefully) my life wouldn’t for a very long time.

In the days since leaving the trail, I’ve also come to realize that I was actually more afraid to trying to be an artist and failing than I was of thru-hiking the AT. I had erroneously been thinking that I had to get into the polluted rat race of commercial theatre in New York or L.A. to make a living. I thought in some ways that this hike was my last chance to be a specific type of happy before growing up and probably having to sell out. Which was why never really having that “I’m so blissed out right now!” moment on the trail was so devastating.

Yet even with all these emotions, I’ve reached my most important goals — feeling at peace with my past and strong in my body and future. I’m not afraid of my potential anymore. The AT minimized many of my fears and confirmed that I am who I say I am.

I’m not afraid of how difficult being an theatre artist and a writer and a decent human being who is able to support herself and who wants to live in a rugged environment is going to be anymore. I hiked 1,000 f*cking miles, lived through the deluge that was the Smokies, walked alongside bears, hitchhiked…and a hell of a lot more.

I am tougher than Thoreau. 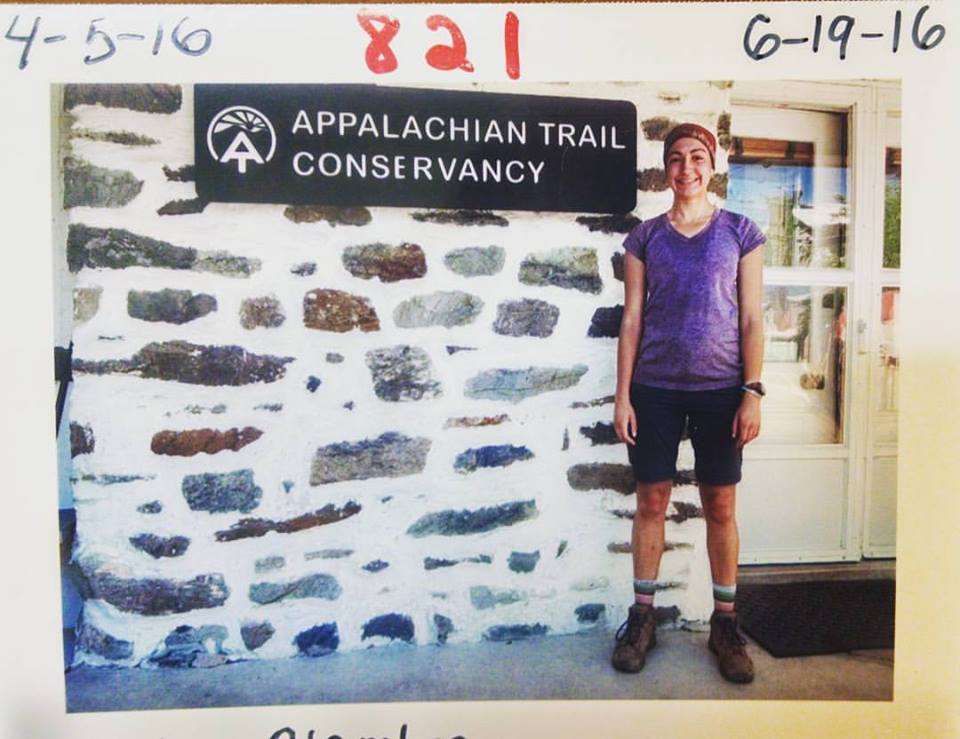