I love things like cemeteries, Return to Oz, and ghost tours. I was pretty psyched to see that there was a restaurant called Toymakers Cafe in Falls Village, CT. With a name like that in a location that sounds like it was plucked from a Stephen King novel, it has to be a creepy place, right? 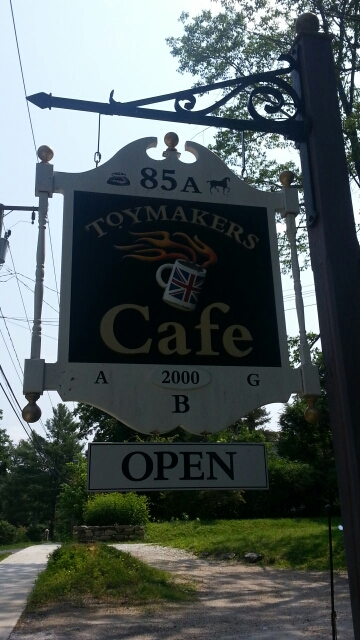 Despite the current Appalachian Trail detour that routes hikers away from Falls Village due to bridge construction, I trekked onward to the restaurant. Without the detour, it’s very close to the trail. Because of the 2015 reroute, however, it’s about a mile and a half away.

I was disappointed in the complete lack of creepiness but found myself loving Toymakers Cafe anyway. Yes, there are a few wooden toys, but the rocking horse didn’t move on its own.

Immediately, I noticed that at least fifteen people (mostly bikers) were already outside on the porch or at picnic tables on this Sunday morning. Toymakers is only open during breakfast and lunch hours (7am-2pm) Thursday through Sunday and it seemed many people were interested in getting their fix before Monday came. 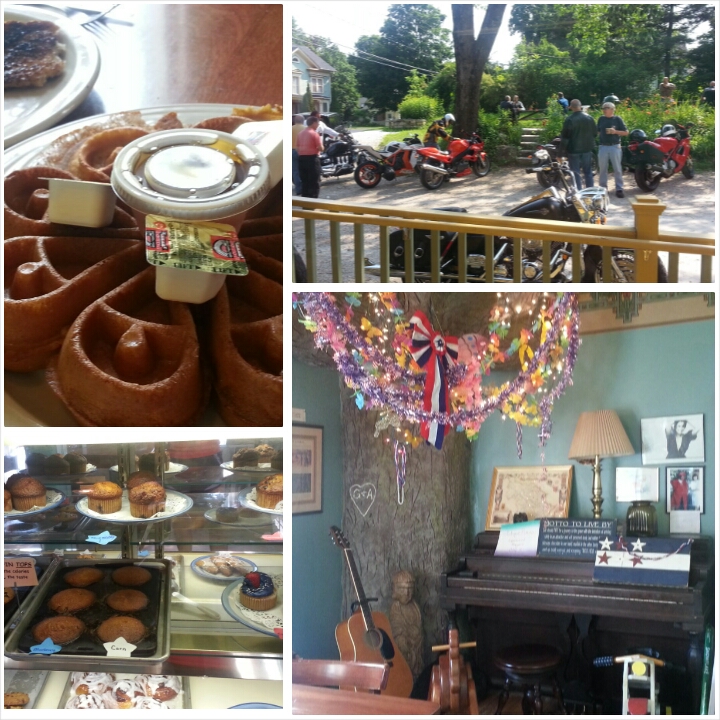 I dropped my pack at the low stone wall at the edge of their property and walked onto the porch. A couple outside pinned me as a thru-hiker and chatted with me about the trail and the cafe. They both recommended the sweet potato waffles. Sweet potatoes and waffles in one glorious meal? Sign me up.

I finally made my way through the front door. Decidedly not creepy. There are a few family-style kitchen tables and warm, worn, unfinished wood floors. In the corner there is an antique piano and a papier mache tree that rises from floor to ceiling.

In a stroke of luck, no one was in line to order. I began to peruse the menu and realized the sad truth that Toymakers Cafe only accepts cash. I had a measly five dollar bill and there is not an ATM machine in the restaurant. One of the owners informed me that they have a hiker fund that currently contained $2.75. This is such a kind and generous gesture for hikers. I chose to leave the fund in tact as it was my own oversight to not think to bring the cash my husband had. I’d prefer that the fund goes to a hiker who simply doesn’t have the money.

After a quick consultation with the owner, my breakfast was decided — coffee and a cinnamon bun. A free refill on the coffee, but not the bun.

In a few minutes, the cinnamon bun was ready. It was warm, sweet, and perfectly gooey. Much to my delight, it was served with a knife and fork. I scraped the plate clean as best I could without making a fool of myself. 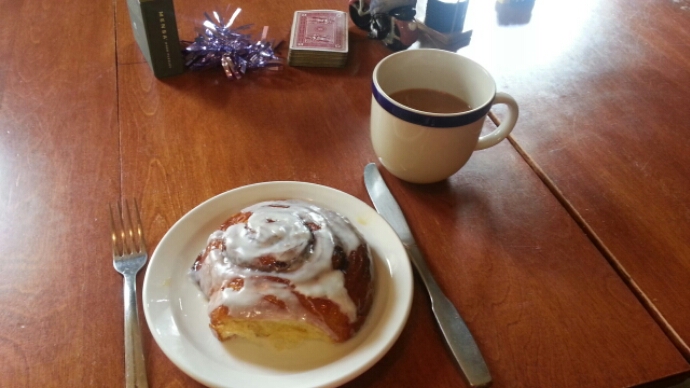 By the time I had gotten halfway through my cinnamon bun, a line had formed, and it was mostly bikers getting their second round of breakfast. The breakfast fare on the menu was hearty with a British influence. The other owner cooks all the food and everything I saw appeared to be well made and large portions. In addition to coffee, they also carry juices, sodas, and sparkling water.

A couple from Miami, Sonya and Fernando, sat down with me at the table and we began chatting. They have been coming to Toymakers for years. When their food arrived — eggs, toast, sweet potato waffles — they proclaimed that it was too much and insisted that I eat some of the sweet potato waffles. Indeed, the portions were sizeable.  I tried to decline, but I may have been drooling. The waffles were not overly sweet and were very light. Absolutely delicious. They were served with real maple syrup, as well. 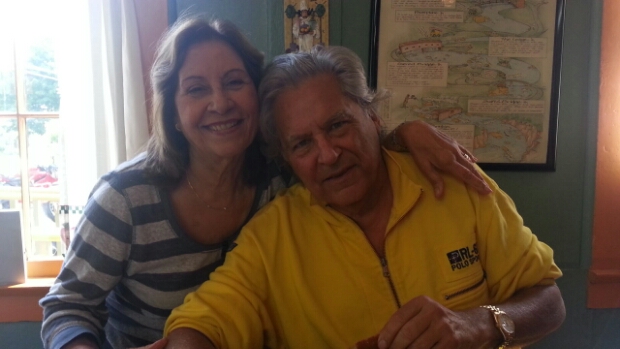 Had Toymakers taken credit cards or had an ATM I can be sure I would have spent at least five times more than I did. I’d love to go back and sample everything.

Turns out, the toys referred to in the title of the cafe are motorcycles. The owners also sell motorcycle parts and are particular to British brands.

Toymakers is friendly toward hikers. A hiker fund, great food, pleasant atmosphere, outdoor picnic tables, and they don’t hide the mayo packets. The prices range from a few dollars for baked goods to $14 for a large meal. 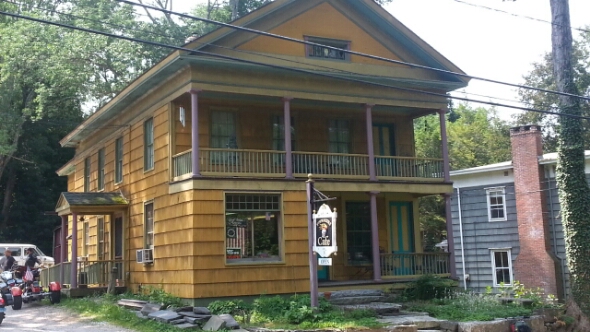