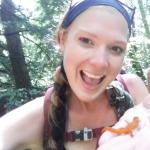 Therapy on the Trail

As beautiful as I found Massachusetts, she put a bad taste in my mouth. The morning of my first full day there, I woke up sick. I felt nauseous, weak, extremely tired, and pretty much worthless. I chalked it up to being dehydrated. Durpadur and I made it to Racebrook Lodge so I could rest and hydrate, but I had a hard time keeping anything down. The nice man who gave us a ride there even wanted to take us out for BBQ, but I just couldn’t.  I tried to eat dinner at the restaurant at the lodge, but the server probably thought I was a picky hiker because I barely touched anything. I finally managed to consume some liquids and slept for about 13 hours that night. I woke up the next morning and the symptoms did not change, except I no longer felt the need to vomit every 5 minutes.

The owner, Dave, personally drove Durpadur into town to stock up on gatorade and sprite, offered his advice on how to nurse myself via old school remedies, and was more than happy to let us stay another night. Throughout the day I slowly started to nibble. I napped a lot. By the time dinner rolled around, I was able to put away a huge portion of pork tenderloin. I still didn’t feel like myself, but decided to hike out the next morning and if I still felt terrible by the time we got to Great Barrington,  I would see a doctor. The fear of lyme disease started to set in, even though I’m religious about checking for ticks.

We took a side trail to the A.T., which was a straight up climb. I couldn’t stop sweating and getting dizzy. Getting up to Mt. Everett was one of the hardest parts of my hike so far, due to fatigue. I had to stop constantly just to breathe, but we made it and the view kept me going. 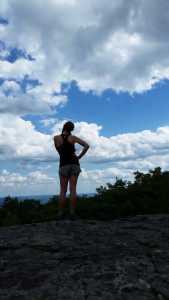 The stretch to Great Barrington was rough. My feet were dragging. My legs felt so heavy. I had no appetite and my stomach was making noises I never heard before. I might have averaged one mile per hour. After finally making it to Great Barrington,  we were able to find the culprit. I have a history of anemia, but it’s not something I have thought about in years. With such low iron levels, the body’s blood basically malnourishes itself and weakens. After having such a fear of lyme, it’s not something I even thought about. It makes sense with the lack of red meat and green veggies I am able to get a hold of in the woods. After more rest, liquids, a stronger multi-vitamin, and an iron supplement, I was finally able to make it back into the woods. I was still moving slow hiking out of Great Barrington,  but I at least put in some mileage. 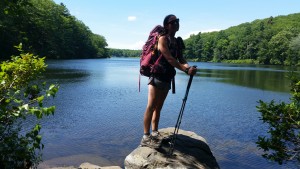 The next day was almost normal. I was able to pick my feet up again and not drag them. I could climb mountains without feeling like I was going to pass out. I saw some of the prettiest views yet in Massachusetts. 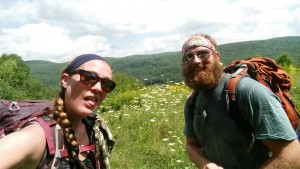 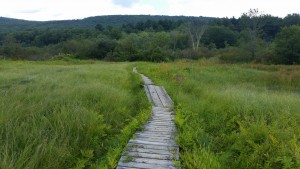 But…. we also got some of the craziest weather that day. It started raining like nothing I’ve seen yet in the northern states. The thunder and lightening were extremely close. The rain was freezing. The temperature dropped about 15 degrees. After 2 hours of storms, it all came to a sudden stop, and the sun was out again. All of the orange lizards came out, and we stomped through the remaining puddles. 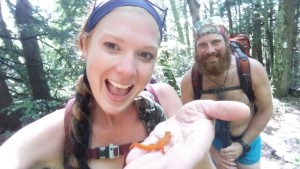 The word on the trail that day was for everyone to stop at Goose Pond, but by the time we got there, a sign was up saying all bunks and sites were full. We needed water and wanted to at least see it anyway, so we decided to check it out. What we found was phenomenal!

We were greeted by many other hikers, both northbound and southbound. Even though there were about 50 people there, we were told to pitch up where ever we wanted. I barely had time to find a spot a pitch my tent before the sky opened up again. Hail, high winds that almost took all of my tent stakes out, and thunder all crashed down at once, but it only lasted about 15 minutes. Afterwards…. 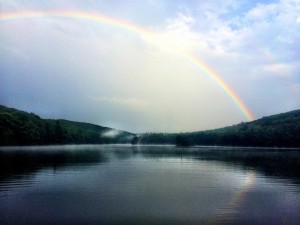 We all came out of our tents, and the fellowship of the northbounders and southbounders amazed me. For some reason, I always figured there was a conspiracy against the two. This is the first time I actually hung out with southbounders, instead of just passing them on the trail. We got to pick each other’s brains and warn each other of what lies ahead. 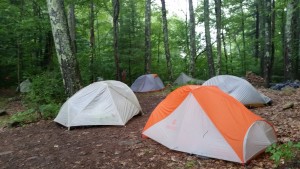 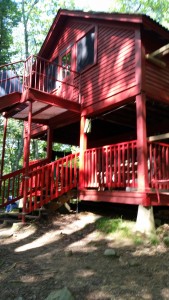 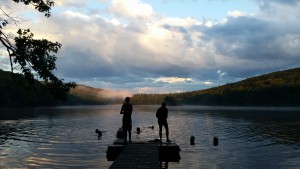 I went to bed early that night to continue to rest, but apparently there was a nice fire, a lot of liquor, and many hungover hikers hiking out the next morning like slugs. I woke up feeling ready to go for the first time that week. I hiked well that day, until I felt my phone vibrate.

I don’t want to discuss details, but my sister informed me of an unthinkable tragedy that happened at home (I only write about it because it’s part of my story). I stood on the side of a 2 lane highway and felt like a ton of bricks hit me. I couldn’t put the pieces together and couldn’t comprehend what my sister was trying to explain to me. I fell to my knees. I basically blacked out and later realized I was in the back of a pickup truck. Durpadur and I were dropped off somewhere, and from there made it to Dalton, Massachusetts where I could think about what I wanted to do. I looked at plane tickets to go home, but I just wanted to forget. I wanted to get drunk and not be able to think, but no matter how much I drank, I couldn’t go numb. I corresponded back and forth with my family a lot that evening. I unknowingly at the time took a vote of the 4 most valued opinions of my family on whether or not to come home. 3 out of 4 told me to stay put and go on and finish my hike.

I just didn’t know what to do, so the next day I hiked. I had it on my agenda to make it to Vermont, but I just couldn’t get there that day. We stopped in North Adams, Massachusetts. I still couldn’t forget. I put on a fake smile when I had to talk to other people, but I was basically a mute. I was a mute when sober, and hysterical when drunk.

We made it to Bennington, Vermont. I had been in somewhat of a bipolar trance for 3 days. I went into hysterical mode again. I saw Durpadur run across the street from the bar we were at while I was on the phone with my sister. He came back to get me and I suddenly found myself picking out a ukulele in a music store. We discussed staying in the woods for a while without going into any towns and learning how to play this instrument. I needed to be without phone reception. This is the point where you realize trail family will take care of you when you just can’t take care of yourself. This is the point where you are thankful you never took them for granted. This is the point where you realize complete strangers can tell when something is wrong and want to go out of their way to help you.

The next day, I set out for high mileage. I had mountains to climb and a smile to put on my face. One of my goals for coming out here was to cure my fear of heights, so I climbed fire towers that I wouldn’t normally climb due to feeling like gravity is out to get me. I’ve climb towers, but never anything more than one flight of stairs… 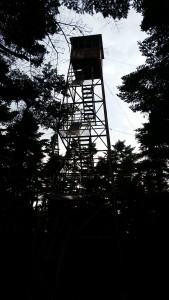 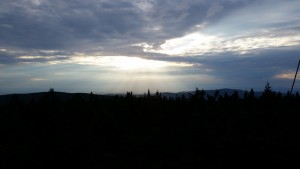 Sunset from a fire tower

After waking up at the fire tower, I had a real treat to look forward to. This would be the day I would finally get to see the exact summit where the idea of the Appalachian Trail was created by Benton McKaye. I’m a total geek when it comes to these things. I’m not sure I sat in the exact spot when he thought of this creation, but I would like to think I did…. and again, I climbed another tower! 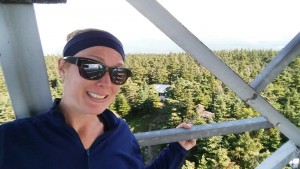 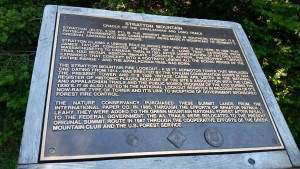 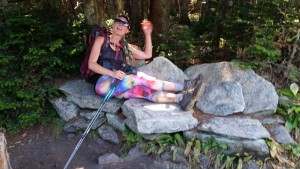 Bromley Mountain has to be my favorite part of the northern states so far. The climb was tough, but worth every step. It was very cold on the peak, which was great after the amount of sweat I accumulated while climbing the mountain. 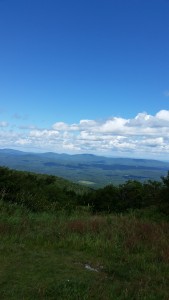 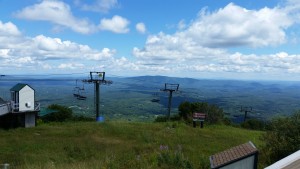 Vermont has been like a healing session for me. After 5 days in this state, I can think again. I guess I started to take the mountains for granted after actually living in them for almost 4 months. I almost forgot why I came out here. The mountains have always been the healthiest therapy I have given myself. You can try to drown your sorrows in whiskey or just block everything out of your mind, but that is not healthy. The mountains give you time to think and work through your problems. This isn’t just a hobby or a bragging right for me, it is something that is better than a massage, a night out on a town, or acing that test that you stayed up all night studying for. When I am stressed out, there is nothing like sweating, feeling the burn, and pushing yourself to the limit to realize you will be ok. So, here I am, so close to New Hampshire, I can smell The Whites. I’m going to finish my hike instead of going home. I’m not sure I will be able to sky dive or become a champion ukulele player by the time I finish my hike, but for now, the mountains are getting me through it all. The mountains are the best therapy for the rough and mentally exhausting times. 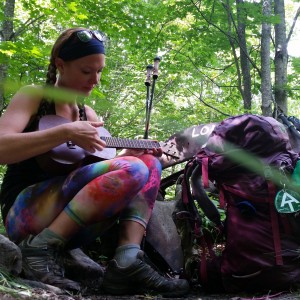