Trail Statistics – My Hike by the Numbers

OK. Now that I’ve been off the trail for a while, my inner geek is beginning to surface. Actually, I wore a Fitbit Surge for the entire trip, so I guess my inner geek was never very far away, even while out in the woods!  Now that I have all this data, what does it tell me?

This is an exercise in data discovery. Nothing useful may come out of this, but – what the heck, let’s see where it goes.

Ian and I spent from May 24th (summiting Mt Katahdin) until December 4th (summiting Springer Mountain) on the trail. That’s 196 days. During that period, we spent 177 days actually on the trail. We had 19 days off-trail to attend meetings for work (me) and to attend a Phish concert (me and Ian). Those days off were as follows:

On those 177 days on the trail, we did the following according to my Fitbit Surge:

I think Fitbit decides the level of activity based on your heart rate. I know we didn’t sitting around “sedentary” for 7 hours a day!

I calculated “Trail Miles” based on our start and stop points. The “Fitbit Miles” are based on the number of steps we took. Obviously, we walked additional miles: to and from shelters; to and from side trails to views; to and from towns for resupply; once or twice from getting lost (just a little bit…). So it makes sense that the total miles we walked would be more than the total “Trail Miles”. I was surprised that it was an additional 840 miles – almost an additional 40% in terms of total trail miles! But, thats what Fitbit came out to.

The following is a histogram of our daily mileage. On our best day, we did a tad over 21 miles.  Maine and New Hampshire accounted for a lot of our low mileage days. 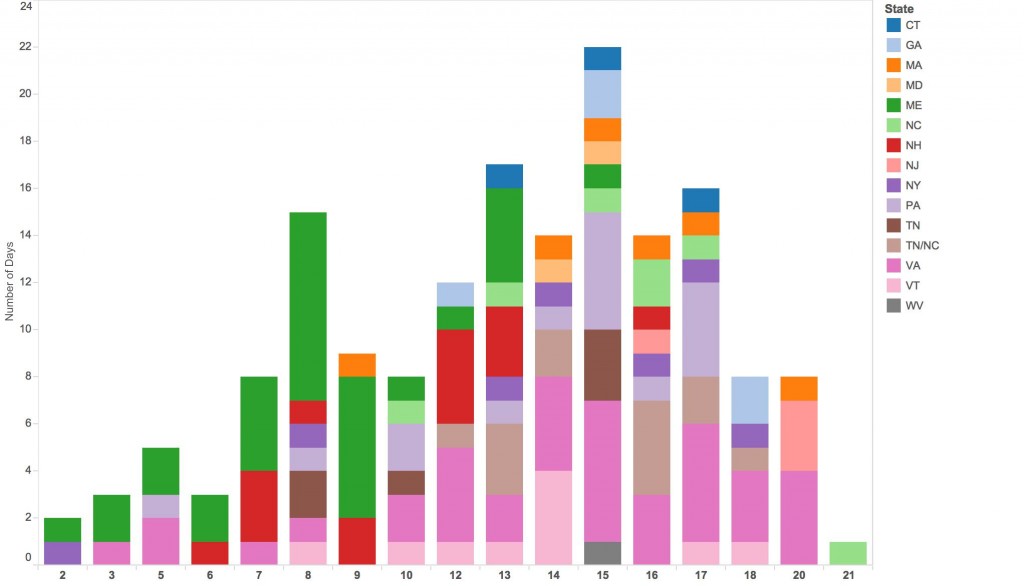 The following shows our trail miles per day.  It tends to be all over the place, but the trend line shows that our mileage tended to increase as we moved along (I suppose it would be weird if it decreased!). 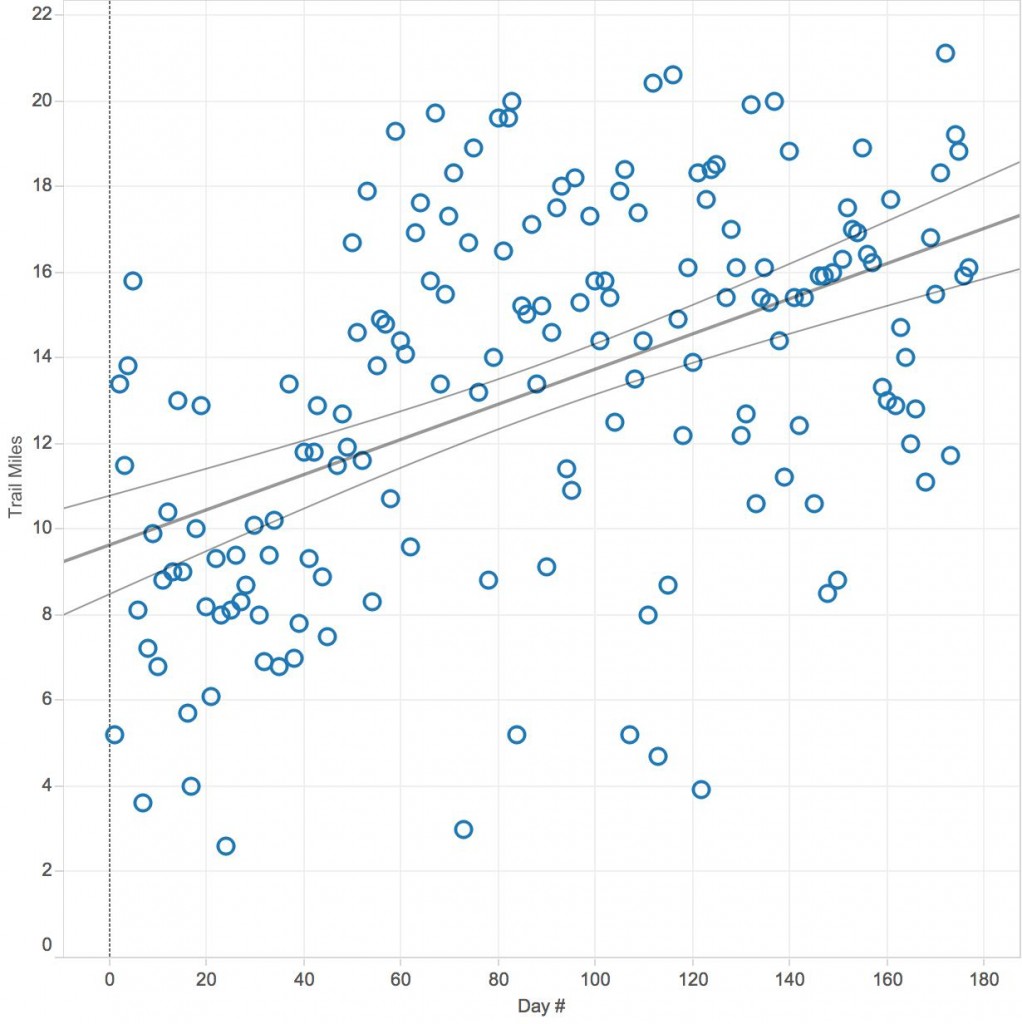 I burned about 4,618 calories per day on average when I was on the trail. It varied from 3,000 to 6,000. It was easy to see the the elevation change was a factor, but that wasn’t the only one. We burned a lot of calories at the beginning when we were working our way through a lot of blowdown and water in Maine. The following chart is a histogram of calories burned by day. It is color=coded by mileage (denoting Zero Days and Nero Days). Note that the maximum calorie day – over 6,500 – was also a Nero Day. That was the day we summited Katahdin. Only 5.2 trail miles, but clearly strenuous! 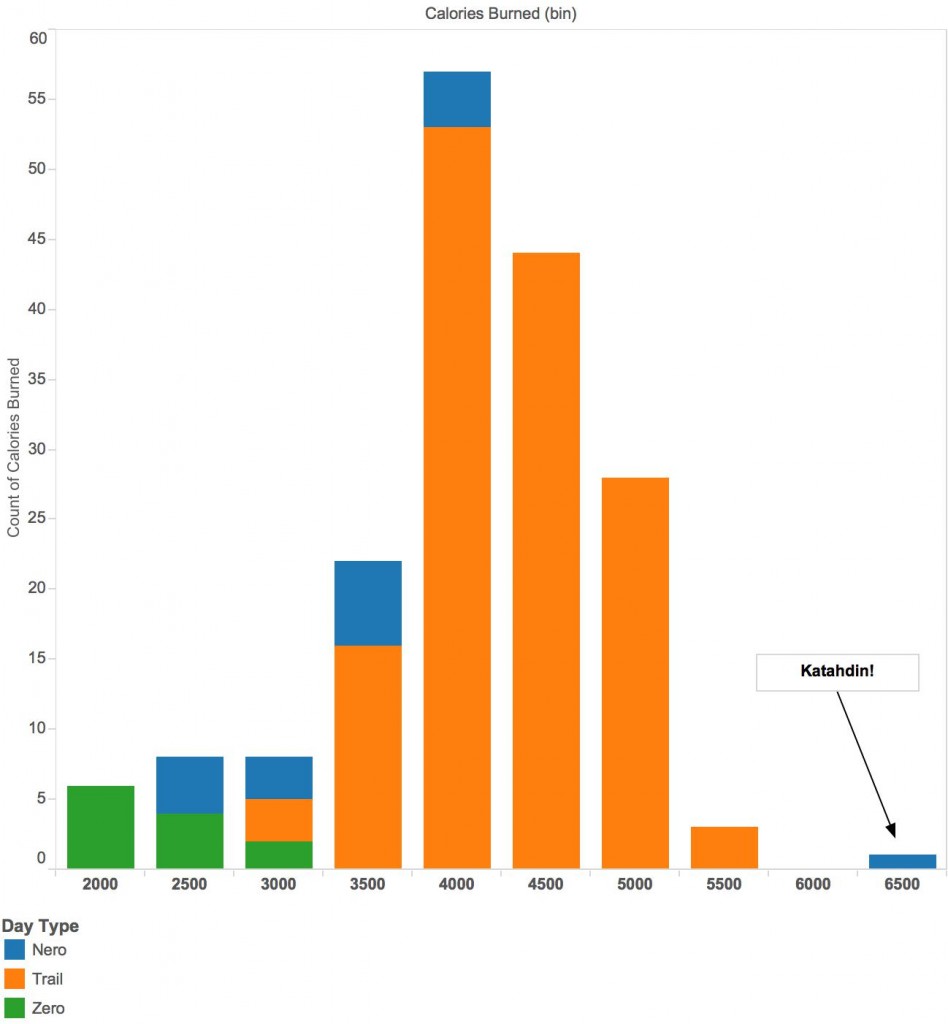 We did not do this cheaply.  I had money set aside for this trip and did not need to pinch my pennies. Furthermore, I am in my 60’s and have the tired knees and hips of someone who spent too many years playing as an ice hockey goalie. I know Ian would have spent more time on the trail and less time at hostels, but he obliged me when I was really feeling wiped out. My overall expenses for the entire trip were $8,936. They are broken gown as follows: 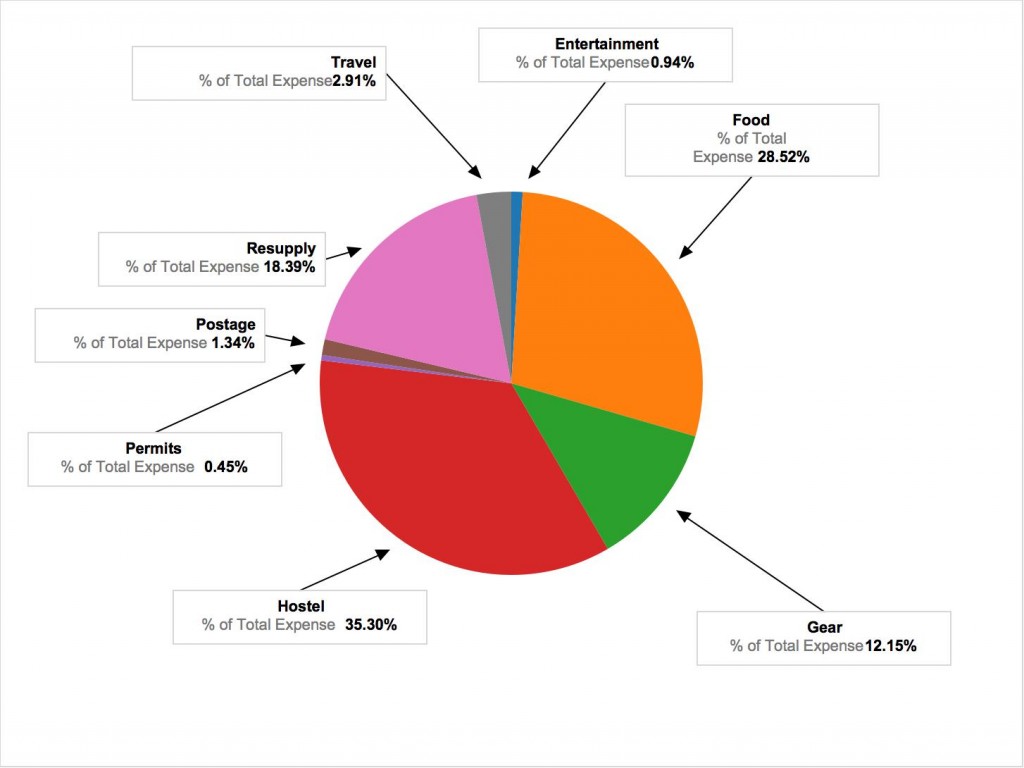 Resupply is primarily groceries bought for food on the trail.  Food is restaurant food eaten in town.  Gear is replacement gear bought on the trail.  I went through 3 pairs of shoes and Ian went through 2 pairs.  We bought some wool base layer clothing in southern Virginia, and Ian bought three pads (he was cursed and everyone of them developed a leak – usually the day he bought it.  I was lucky and completed the trail with only one air mattress- A NeoAir).  Entertainment includes three movies:  Jurassic World, A Walk in the Woods, and Everest.  Travel was our train tickets to and from New York City and to and from Philadelphia.  Out travel to BSP and home from Georgia is not included.  Permits are for GSMNP.  Hostel includes hostel and hotel fees, showers, and laundry.  The following charts show my expenses by month and by state: 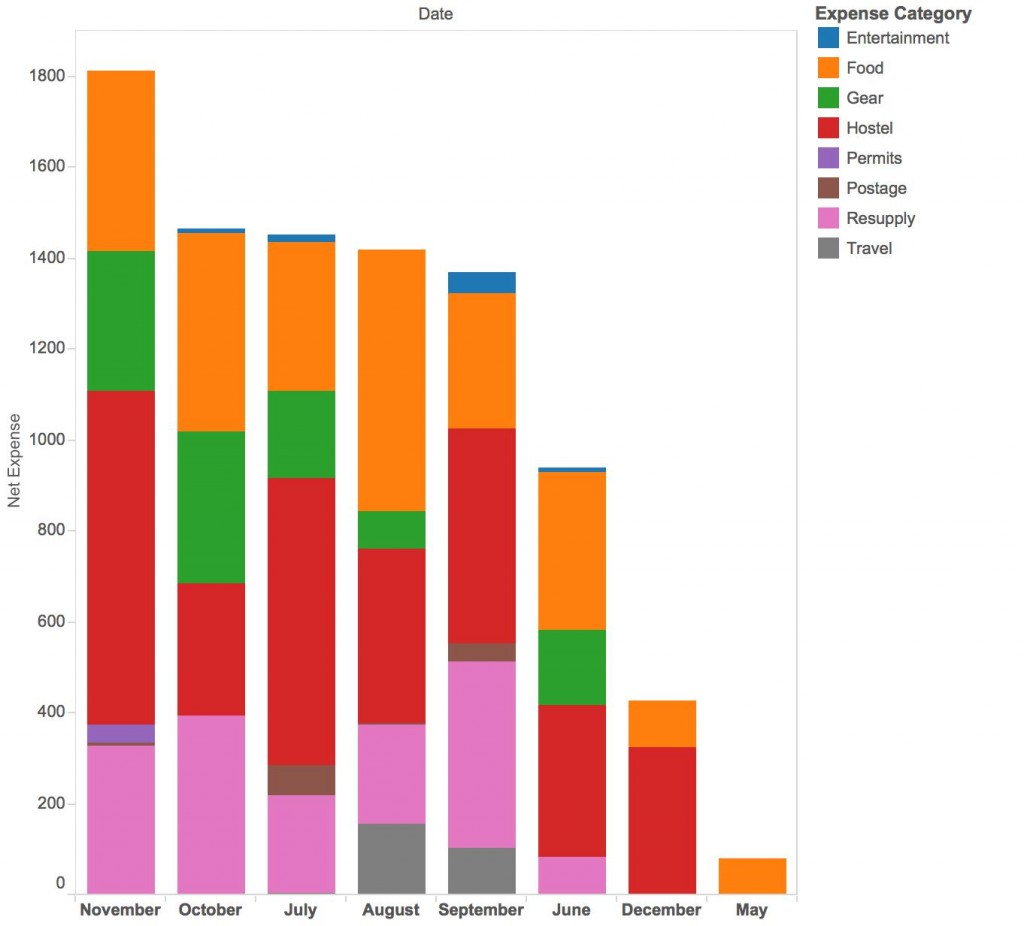 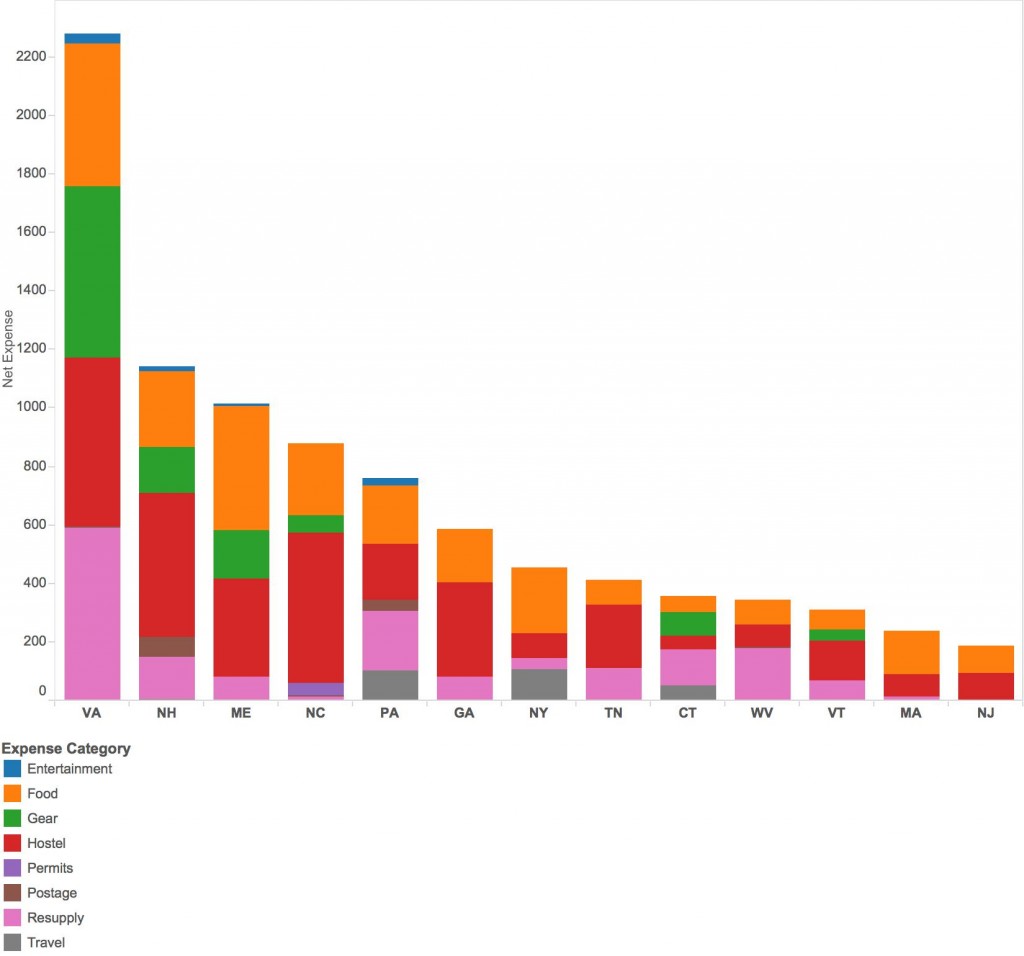 In the above graph, Virginia is the most “expensive” state. That makes sense when you think of how long Virginia is and how long it takes to get through it.

That it.  I don’t know how useful this will be to anybody.  Maybe your (trail) mileage won’t vary, but I expect everything else will!