I haven’t written in a while. Truthfully, I’ve been so busy doing life that it hasn’t been a priority. But lately, in the rare quiet moment that I may experience during my planning period at school (I’m a teacher now) or lying in bed right before falling asleep, I’ve found my mind wandering, drifting off to a world that I knew and loved and want to be a part of again.

Rewind: If you’ve read my blogs you probably know this, but after the devastating end to my thru-hike attempt last year (breaking my foot after hiking 700 miles), I relocated to Franklin, NC. I LOVE LOVE LOVE living in a trail town. In fact, it’s probably the only thing that got me through post-hike depression and has kept me going these last several months, through my recovery and the process of reconciling the defeat and failure one feels when a dream ends before it has barely begun. Since July, I’ve had two jobs: working in wilderness therapy until December, and teaching high school since January. I was feeling confident in my choices when I took the teaching job and officially started my career (WHOAH!). I was OK with not finishing the trail. In fact, people often asked me if I’d try again and my answer was always no if not HELL NO. I told them thru-hiking lost it’s romantic appeal. I told them I didn’t want the hassle of finding the time or the money to do it again. Life was headed in a pretty cool direction: I like my job well enough, I get to hike on the AT anytime I want, I have my dog back and a savings account (what even is that?)… and then the thru-hikers started showing up. In fact, the first ones I met started on January 1st. They were in town in early January and their arrival changed everything. 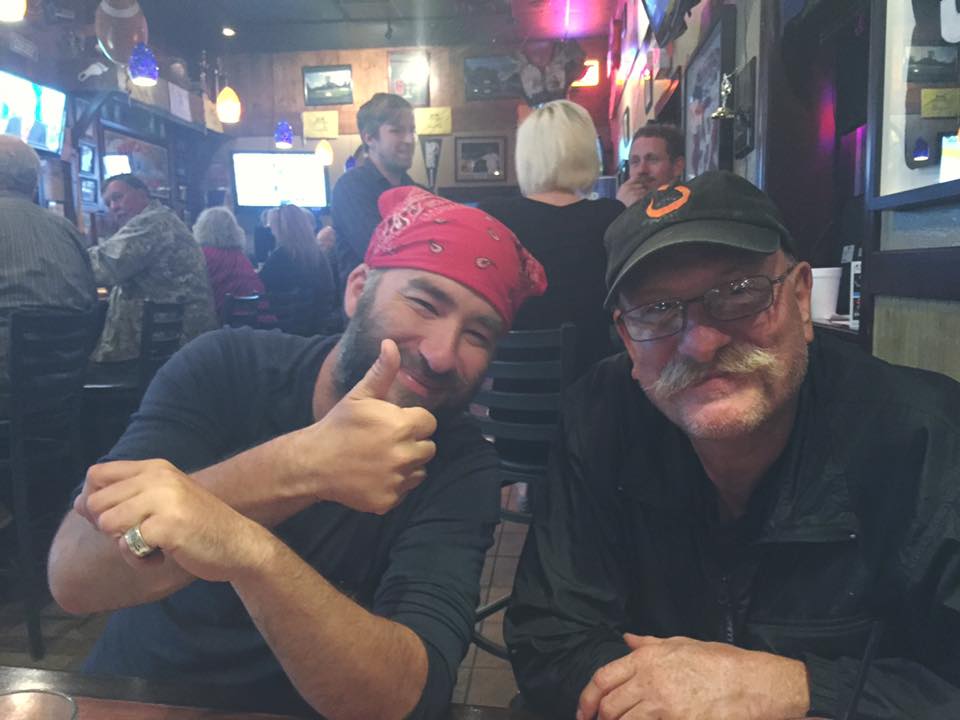 Dining with Cold Turkey (left) and Wyatt Earp (right) who I met at Mulligans Bar & Grille in Franklin. Wyatt Earp had us all in tears sharing stories of his time of service in the military and about his family and children back home.

On January 1st I committed to something called a “52 Hike Challenge“, which is a challenge that encourages members to get out and hike at least once a week. Since then, I’ve been logging hikes pretty much every week. On January 9th I decided to go out for my second hike of the year. It was raining that day, so I didn’t want to put in the physical effort to hike to a view I wouldn’t be able to see. I was also in the very early stages of starting to hike again after my injury and didn’t want to hike further than two miles. I settled on the Wasilik Poplar Trail, which is accessed at Rock Gap, where it branches off from the Appalachian Trail. I parked at Rock Gap and Shooter the poodle and I did the 1.4 mile round trip hike at a leisurely pace. I wasn’t expecting to see a soul out on the trail on this day considering the weather and the season, but when we rounded the last switchback and headed toward the car I spotted a pack on the ground. It can’t be…. I thought as a approached. When I got to the road I introduced myself to Blizzard… the first thru-hiker of the season that I met. He was headed to Maine after hiking most of his first week on the trail in snow and rain. Meeting Blizzard hit me like a ton of bricks. He was my first human contact with a thru-hiker since I relinquished that descriptor in July. Here this guy was, a week into his hike, living MY dream. Ironically my fully packed pack was in my car at the trailhead, and it took every ounce of self-control I had not to throw it on and head north with him. 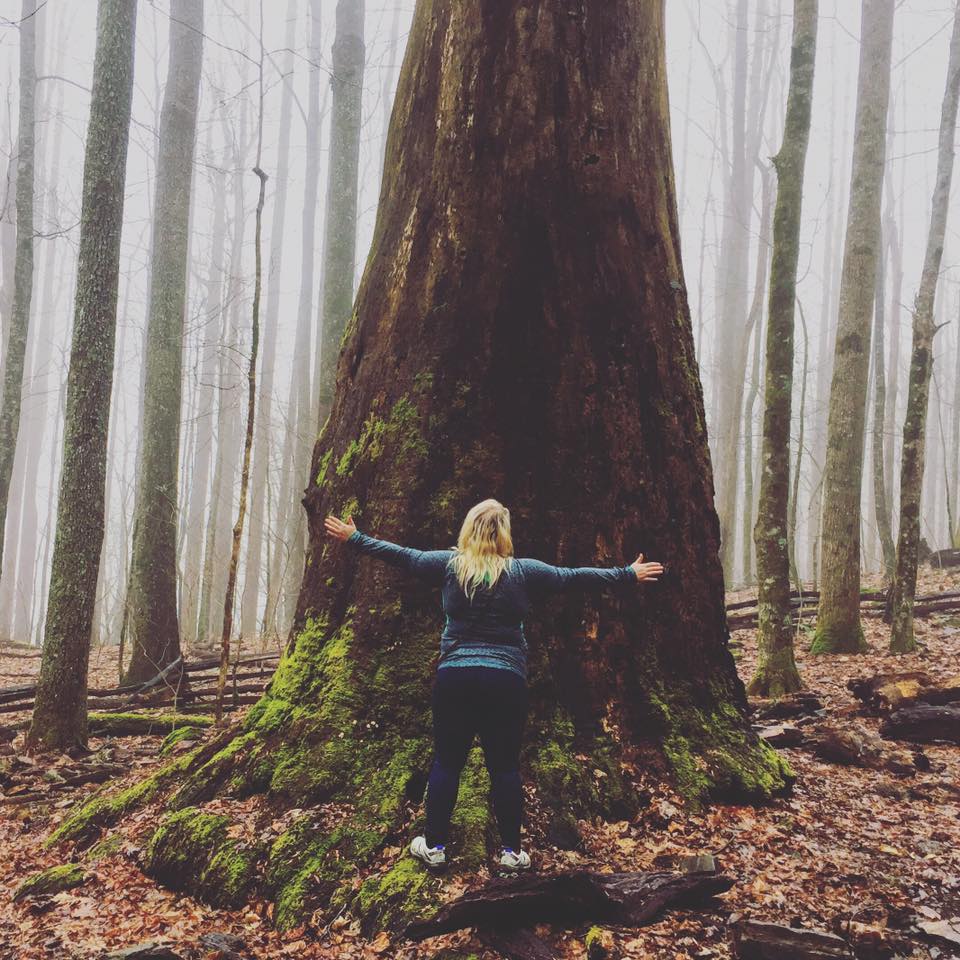 Tree-hugging at the Wasilik Poplar, a .7 mile blue-blaze (actually it isn’t blazed at all) off the AT at Rock Gap in NC.

Since that day, I’ve run into literally hundreds of thru-hiker hopefuls rolling into Franklin for burgers and beer, showers and laundry. I relish the moments I get to spend with them, to hear their stories and live vicariously through them for a brief moment. I’ve given them rides, let them sleep on the floor of my bedroom, helped them slackpack, provided trail magic, and in turn they’ve allowed me to be a small part of their journey, to share a tiny piece of the adventure while I’m stuck here in career land, trudging away at something that I thought would fulfill me, but isn’t. 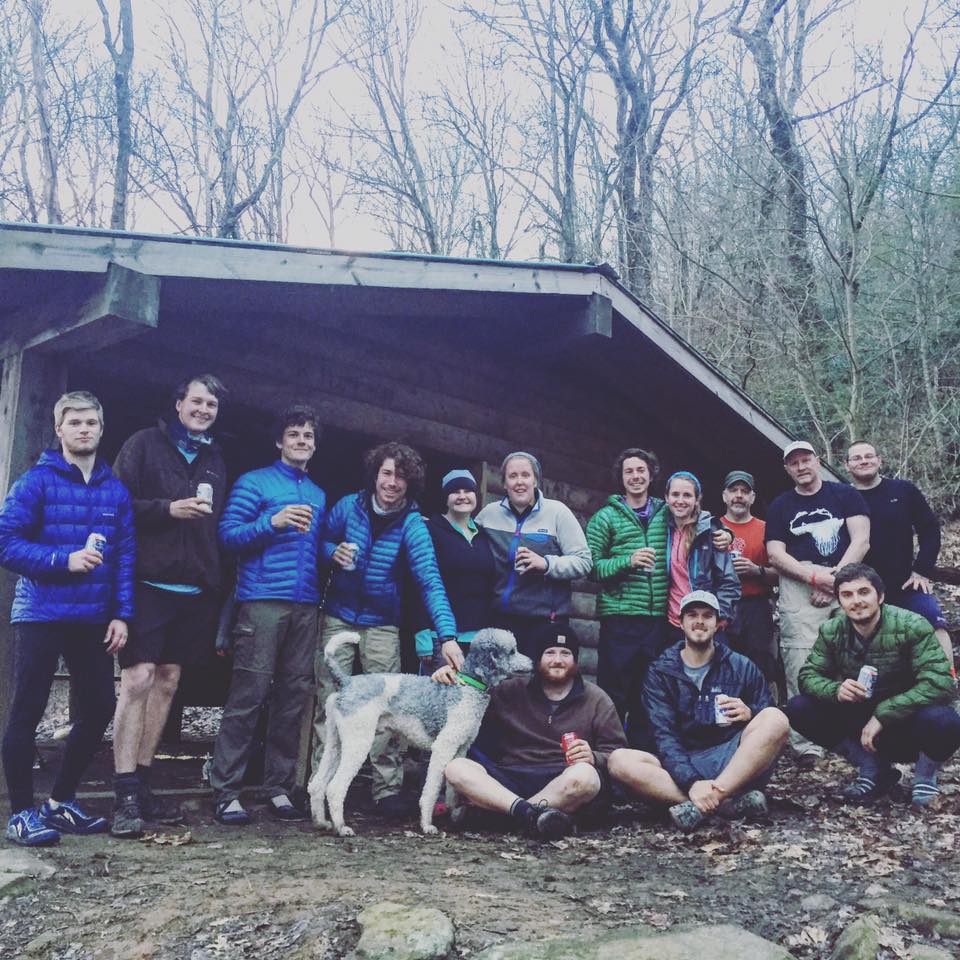 Shooter the Poodle and I (mainly him) carried a 12 pack down to Wayah Bald Shelter to hand out to the hikers staying there… we didn’t have enough beer by a long shot.

Since I started hiking again in January, I’ve worked up from 1 mile hikes carrying no weight to 10 mile hikes carrying a full winter pack. I get out on my beloved Appalachian Trail every chance that I get: one of the perks of living in a trail town is that the trail is easily accessible. I’ve done a few overnights in the last couple of months. I actually got to introduce my mom and my little brother, as well as one of my mom’s good friends (Greg aka “Old School”… look for him to thru-hike in a couple years), to the AT and to backpacking a few weeks ago. I attended ATKO (Appalachian Trail Kickoff) at Amicalola Falls and TrailFest in Hot Springs. I’ll be in Damascus at Trail Days next month. These events are all well and good but I can’t help but feel like I’m chasing my tail, running toward something I can’t quite see and have little hope of attaining. The trail is calling me and I can hear it, but I can’t quite reach it. 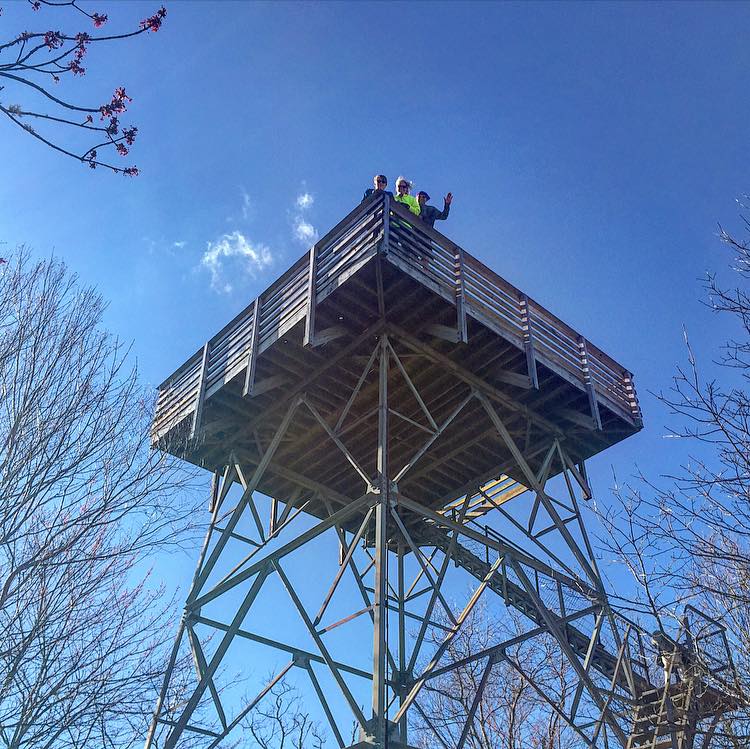 My mom, my brother, and family friend Greg atop Wesser Bald tower on a recent overnight hike.

So here I am, blogging on AppTrials even though I’m no longer a thru-hiker. I don’t look like a thru-hiker: I wear makeup (which I hate) and I’ve gained 25lbs since leaving the trail in July (gasp!). I don’t feel like a thru-hiker: the longest day I’ve done in 9 months is 10 miles, compared to the longest day I hiked while on the trail which was 24 miles. But I want to be a thru-hiker. I long for the all day walks, nights spent nestled in my hammock, evenings spent around campfires sipping moonshine out of water bladders and conversing with the most genuine, enlightened, thought-provoking individuals I’ve ever had the pleasure of meeting. My soul aches for the companionship of the tightly-knit trail family and the true magic that one can only experience in the trail community. 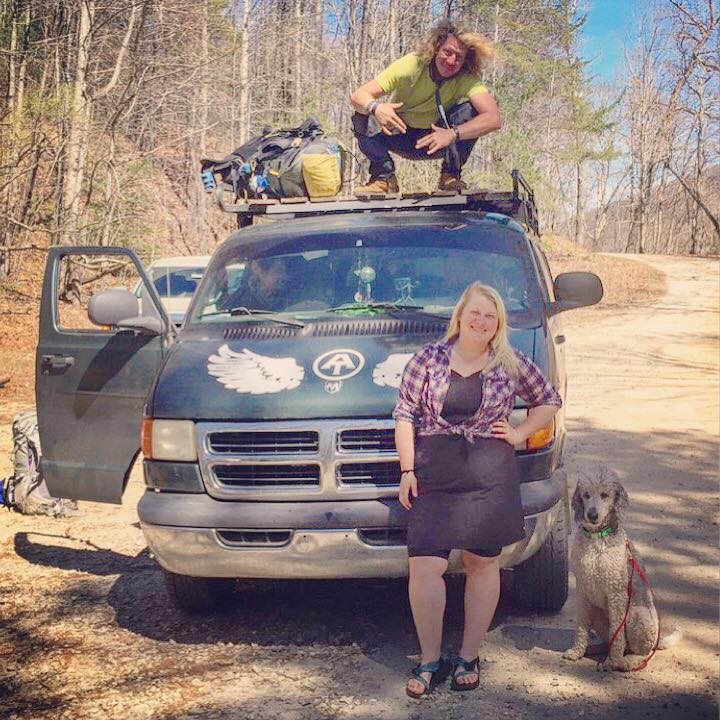 Shooter the Poodle and I have had the privilege of hanging out with Ms. Janet several times this hiker season. Her generosity epitomizes the sense of community surrounding this footpath and I’m always grateful to be in her presence. This photo also features Morningwood, whom I hosted a week or so later in Franklin and how is now helping out at Greasy Creek Friendly.

Because of this, in the last several weeks I’ve found my mind wandering, my thoughts stirring towards that familiar place – starting to actually contemplate how I could feasibly attempt another thru-hike. It would take literally moving mountains on my part: I don’t have enough money and, and hiking would cause me to have to give up my job, which I just started, and also figure out what I’d do for money once I got back since it wouldn’t be teaching job season (do I even WANT to teach is a huge question… I don’t love teaching in the public school system but I really do love teaching). I’m exploring a few options, including a reality TV series casting option which Zach shared pretty recently (I’ve had TWO interviews now… just waiting on a verdict from the producers which I’m hopeful for but not holding my breath about). If anyone has any brilliant ideas for coming up with the funds to hike, shoot them my way (isn’t this what we are ALL looking for? There has to be a solution.) In the meantime I’ll be trying to figure out what I’m doing with my life and how to get my butt back out there. 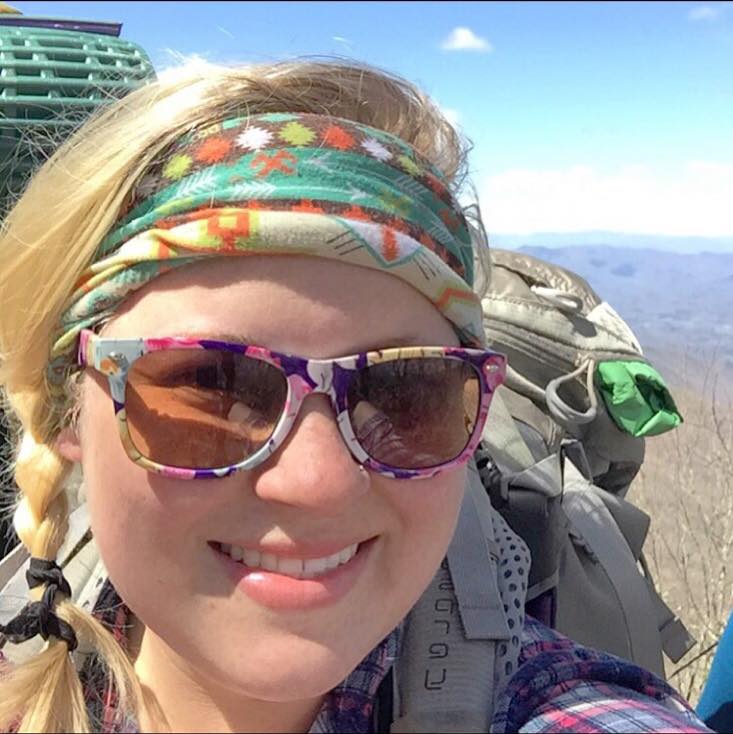 Until I can get back out there full time, I’ll settle for being hikertrash for a weekend.