I’m behind with blogging. This blog will cover my time from the end of the Smokies to entering Damascus. In reality, I left Damascus over a week ago. I’ll catch up soon, hopefully.

From the Smokies to Hot Springs.

Right as we left the Smokies, the weather was beautiful and everything was lovely. It’s sort of annoying to spend an entire day going downhill (leaving the Smokies) only to then spend the next day going uphill, but we weren’t trying too hard to make tons of miles, so it was fine. 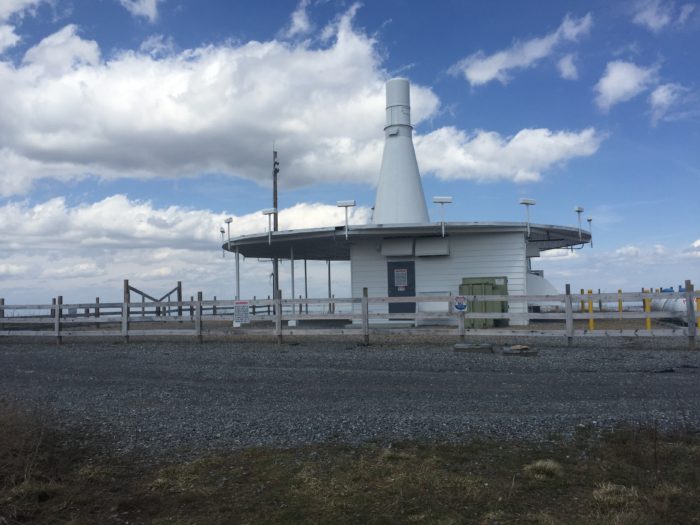 We found this on top of a bald- pretty sure it’s a spaceship.

It started raining at some point after dinner, and didn’t stop the entire next day. It was cold and miserable and especially annoying since the day before had been so nice. We did get trail magic early on in the morning, though. Two former thru-hikers had set up tarps and were making breakfast sandwiches out of the back of their car. This was definitely the highlight of my day. We went over Max Patch later in the morning, and it was incredibly cold and wet and windy, with literally no views at all. Since Max Patch supposedly has some of the best views on the trail, this was disappointing. By the time I had set up my tent and crawled inside for the night, I was pretty sure I was the wettest and coldest I’d been on the trail so far. 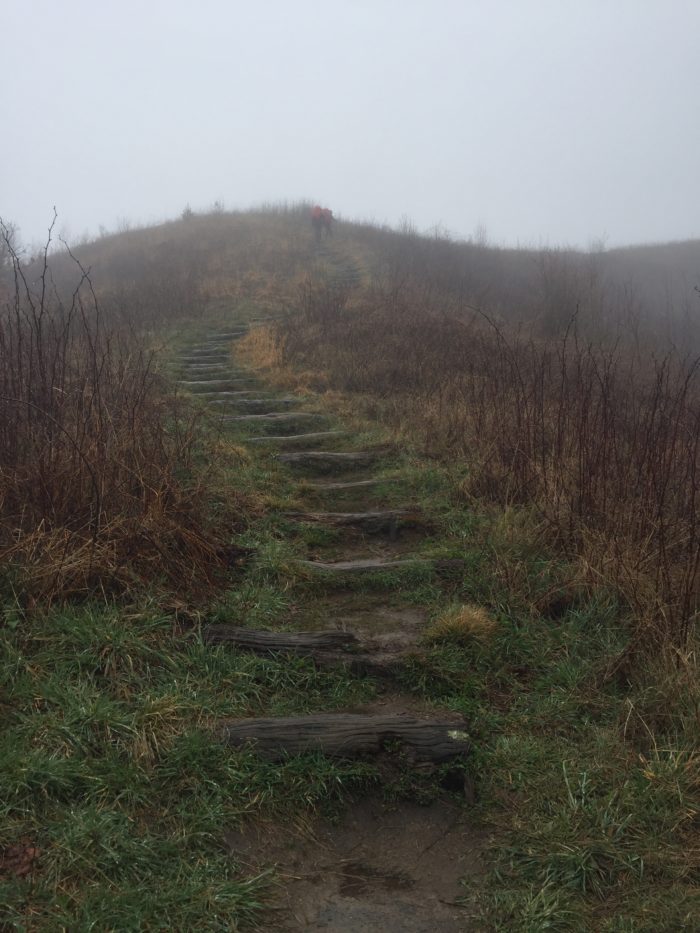 Max Patch: the most beautiful clouds on the trail.

Luckily, the next day was Hot Springs.

Hot Springs may be my favorite trail town.

I loved it, and not just because it wasn’t raining. The trail goes right through the middle of the town, and they have tons of good food, a nice outfitter, and a nifty river. 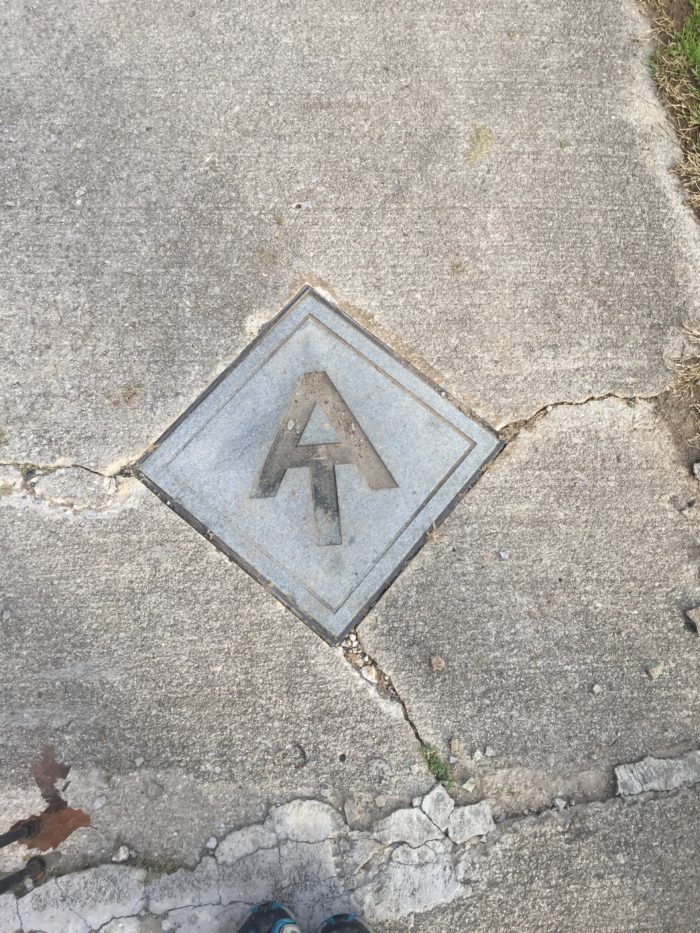 This sidewalk is AT certified.

Hiking the six miles into Hot Springs was probably the hangriest I’ve been on trail so far. I hadn’t really eaten much for lunch or dinner the day before since I was miserable, and I spent the entire morning thinking about food. It took so long to get food. (Thankfully someone had left bananas and beer at the trailhead to tide me over.) We camped on the lawn at Laughing Heart Hostel, showered, and finally headed over to the Smoky Mountain Diner for some really delicious lunch. 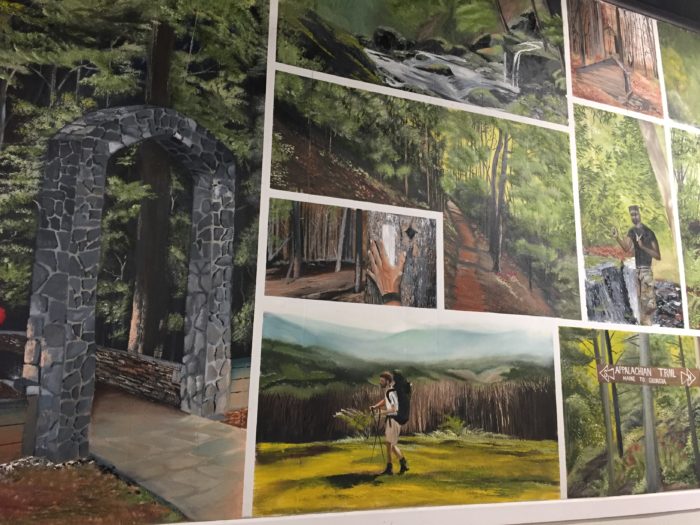 They have this cool mural!

After a four-piece fried chicken meal with mac and cheese and greens, and a huge slice of peanut butter pie, I felt like I might not need to kill anyone that day. It was beautiful out again (there’s never an in-between) and I had a great time hanging out on the lawn and soaking in the sun. The next morning, we packed up and headed over to the Hillbilly Market for breakfast milkshakes. We drank those as we headed out of town and along the trail to our next destination: Erwin, Tenn. We had a lot of uphill hiking to do again, but the trail winds along the river, so at least it’s pretty. 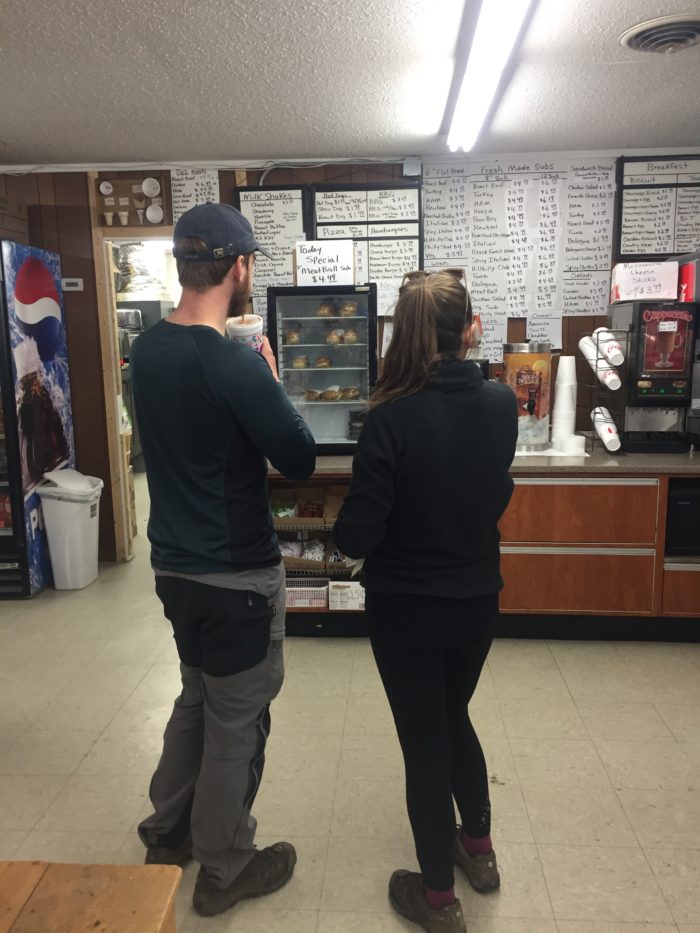 From Hot Springs to Erwin.

This was a great section of trail with some fun challenges. Our first day out of Hot Springs, we encountered a bunch of trail magic. One guy we met had been struck by lightning something like 12 times- I’m still not sure how that happens. We took a detour off trail to climb a fire tower (literally, since the bottom half of the stairs were gone). We missed the trail angels giving out massive amounts of beer, but we reaped the benefits later when other hikers carried out a six-pack only to give it all away at the end of the day. 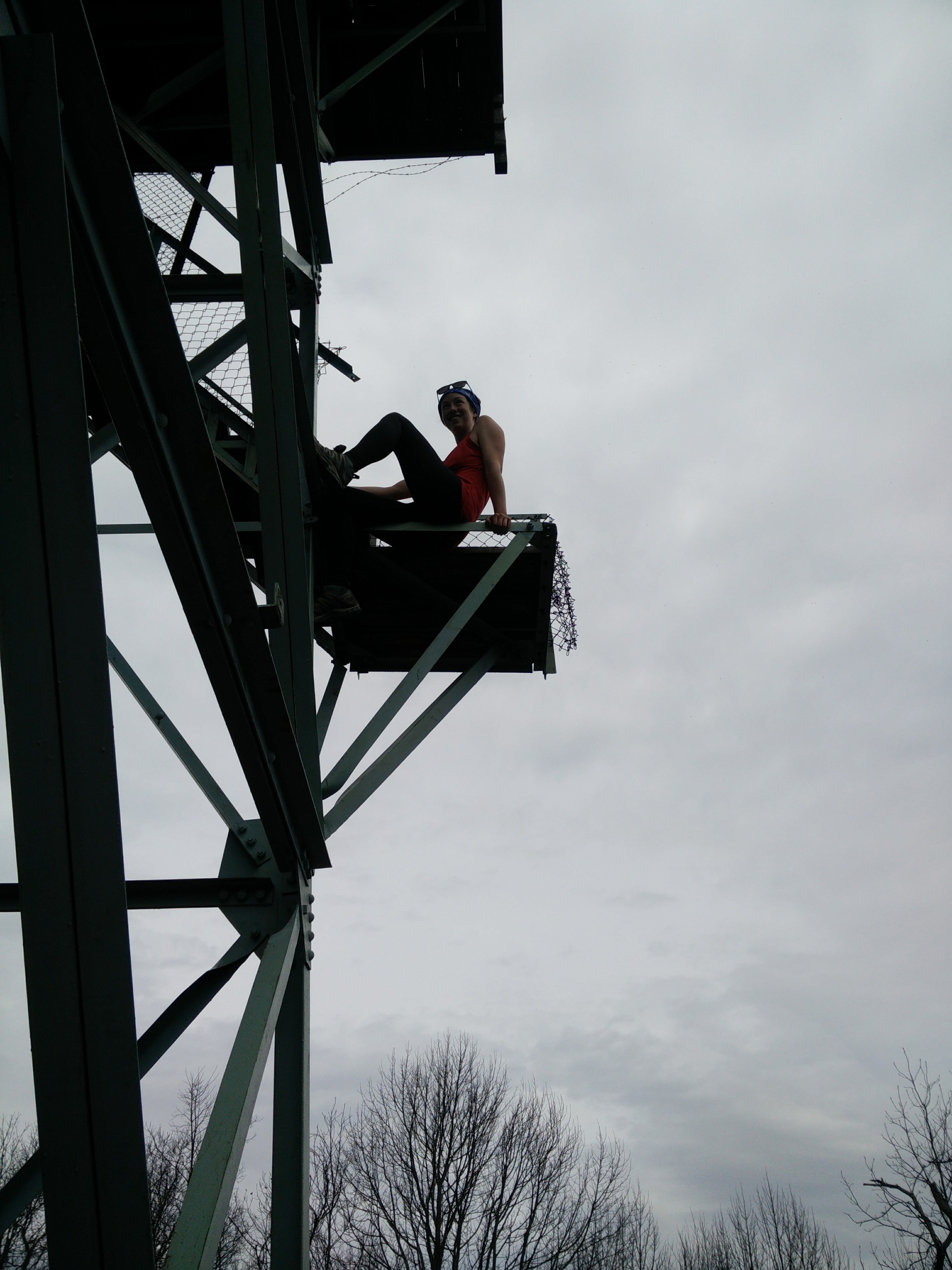 You have to work extra hard for some of these views.

In this section of trail, we also ran into some exciting rock scrambles, and passed 300 miles. We also did our first 20-plus mile day, which ended in the closest thing I’ve had to a thunderstorm. We were all in bed by the time the rain started, but it was definitely a nerve-racking night. Four days and 75 miles later, we rolled into Erwin. 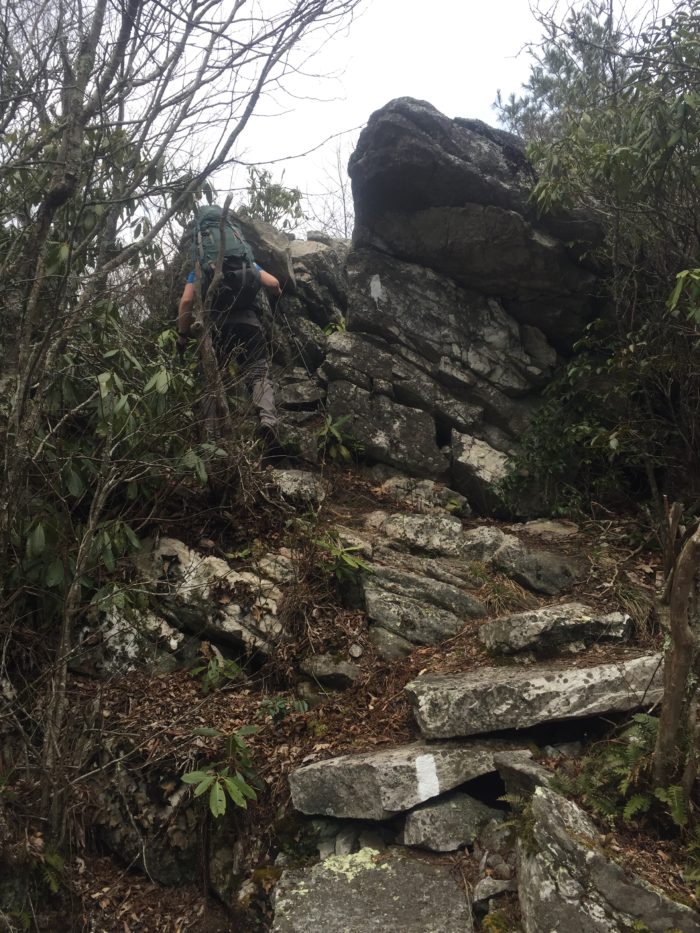 Erwin – not as good as Hot Springs.

I shouldn’t be mean to Erwin. It’s not a cute, compact little town like Hot Springs, but it does have some good points. We stayed at Uncle Johnny’s hostel, which is right on the trail and provides shuttles to various parts of town multiple times a day. They also have three cats. They’re incredibly cute. 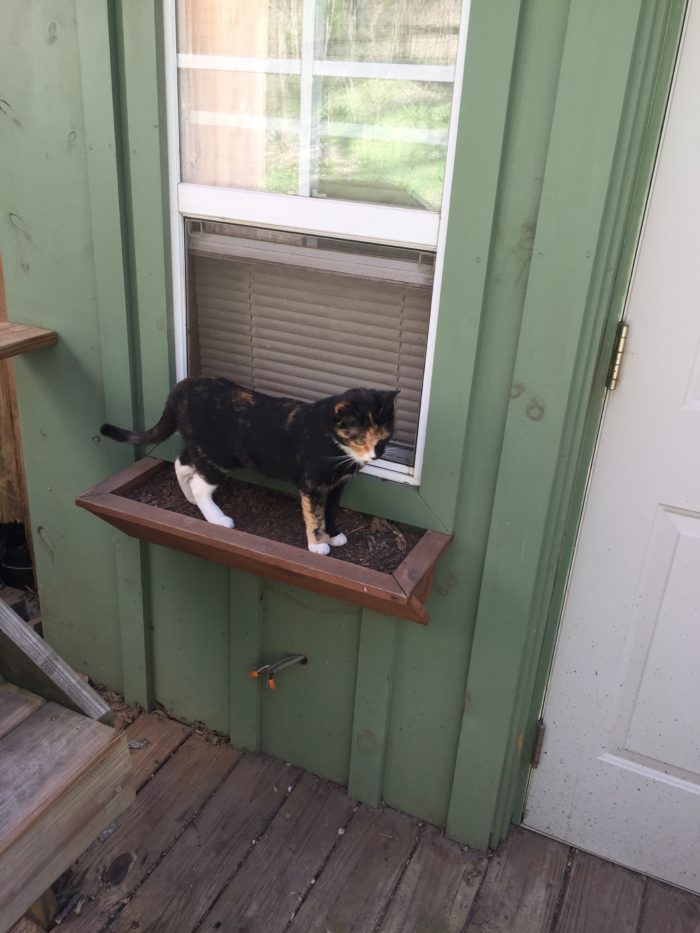 I had my first experience with Pizza Plus in Erwin, which is an all-you-can-eat pizza chain that’s in quite a few towns down here. Their cinnamon dessert pizza is amazing. Apparently, all Pizza Plus locations have a rubber duck crane game, so now all of us have a rubber duck attached to our packs. Other notable Erwin activities included a poker game of spare change that no one wanted to win because change is heavy, my first bike ride in six months, and a post-beer-and-margarita Walmart trip, in which I purchased Oreo-flavored hot chocolate. 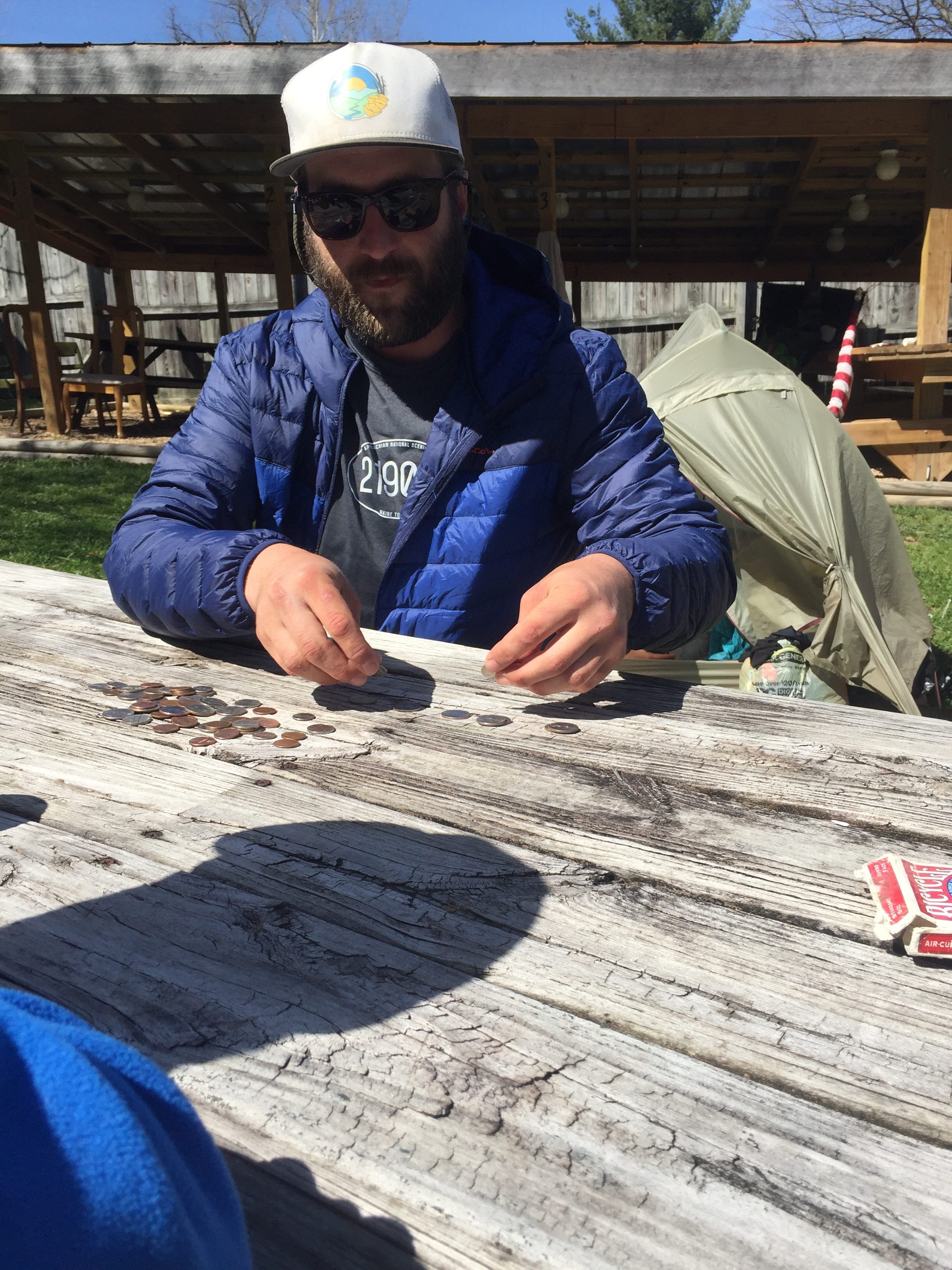 Tall Boy dealing out for poker.

Almost out of North Carolina!

The weather coming out of Erwin switched rapidly back and forth from sunny and beautiful to snowy and gross. We had several nights down in the low 20s again, which I was hoping we were done with now that it’s April. The Roan Highlands were beautiful, and at least it was clear even though it was cold. Our original plan was to try to get to the town of Roan Mountain to resupply, and then head back out and camp instead of staying in town. We had some miserable nights in this section, and after waking up to a couple of inches of snow at Overmountain Shelter, we called up a hostel instead. 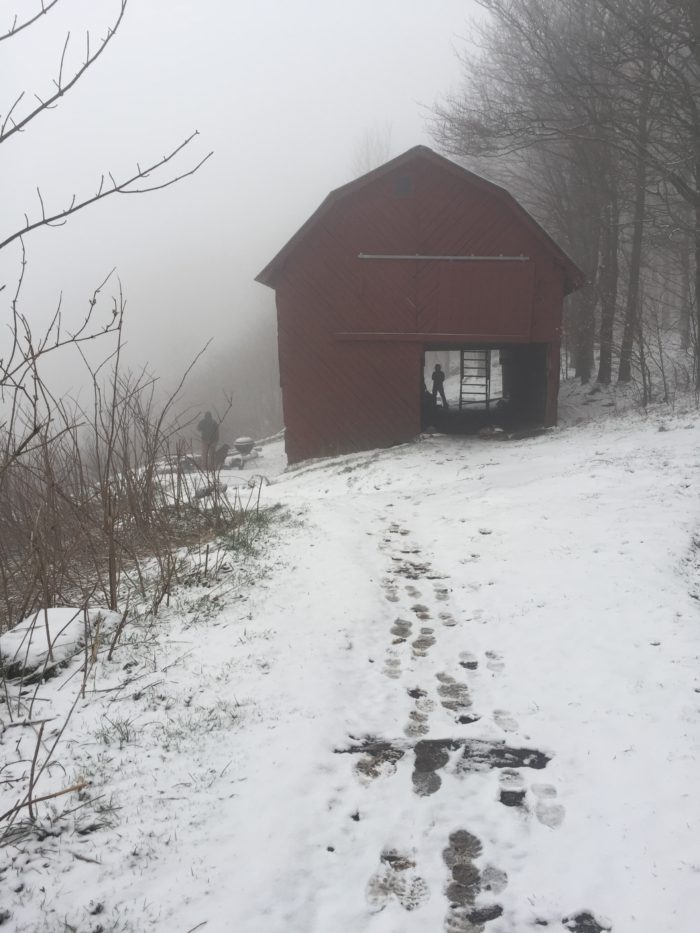 Really starting to dislike the snow.

Seriously, there’s only one place that sells alcohol. Luckily, they also own the hostel we stayed at, and had some great beers on tap. Highlights of Roan Mountain include barbecue and milkshakes at hiker favorite Bob’s Dairyland, and caramel pecan pancakes at Smoky Mountain Bakery. Although we didn’t plan to stay here, I enjoyed the town and the hostel. The hostel had the comfiest bed I’ve stayed in, and the coldest shower. 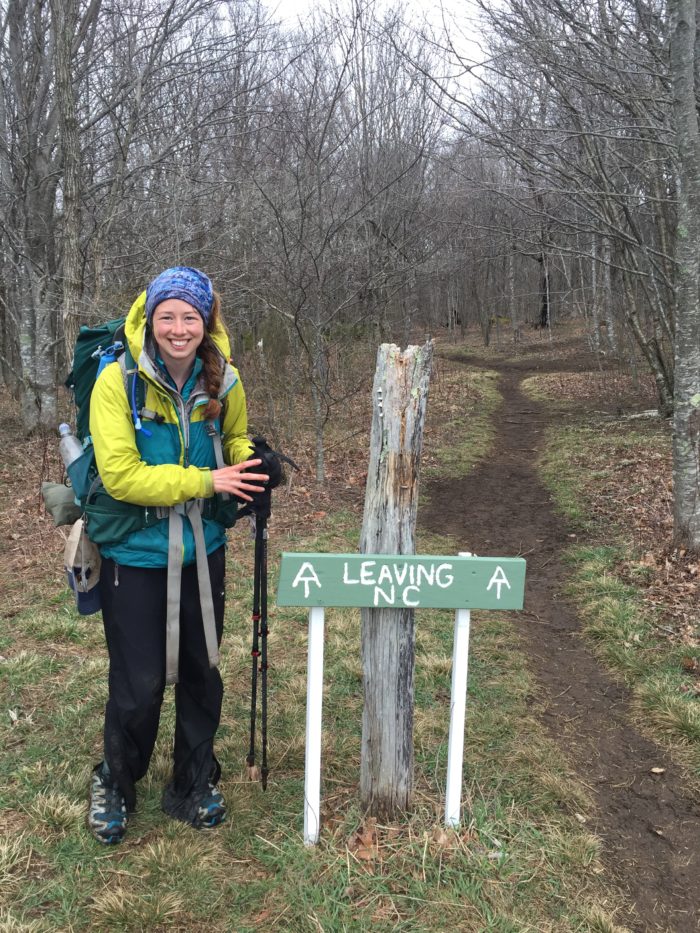 Officially two states down! Only 12 to go.

This section from Roan Mountain to Damascus has been my favorite so far. It is gorgeous. Seriously, you couldn’t ask for a more perfect section of trail. It’s relatively flat, you pass by multiple waterfalls, along rivers, across bridges, and around lakes. The weather was sunny and warm through this whole section, which helps, but it also is just a really pretty area. I think we spent three whole days from Roan Mountain to Damascus, including our longest day yet at 24 miles. 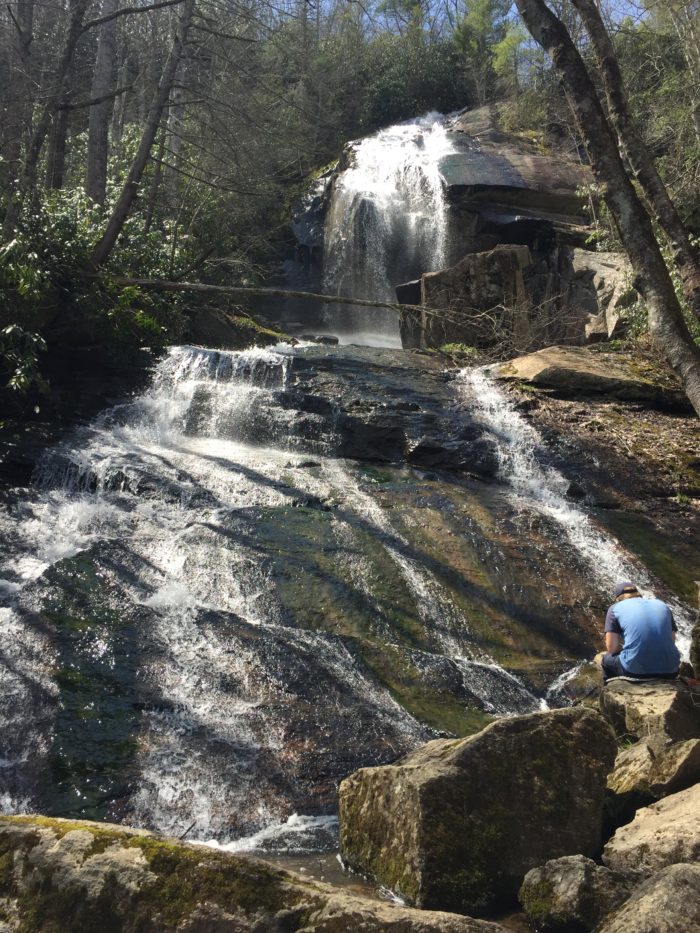