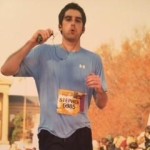 There’s a lot of time for thinking out on the trail, and so when the idea for this blog post came to me the other day, I spent the majority of 18 grueling miles in the rain thinking of the content below. It was a very enjoyable distraction. If no one else, I know at least a couple of my buddies will appreciate this. 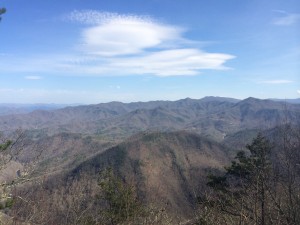 The views from the AT are real and they’re spectacular

After a zero day (no miles walked) in Franklin, NC, Carsoni and I hitched back to the trail. While hitching is not something I would usually feel too comfortable doing (mainly for fear of being picked up by a Crazy Joe Davola type) the people around the trail seem to understand the hiker culture and the need to get to and from town. They also all seem to drive pick-up trucks, not that there’s anything wrong with that.

After a couple of days of hiking, we arrived at the Nantahala Outdoor Center (NOC). “These pretzels are making me thirsty,” Carsoni exclaimed when we arrived so we headed straight to the General Store. There the attendant informed us that the NOC is considered a resort so we can freely imbibe alcohol throughout the grounds. “Giddy up!” I said and quickly looked for some peach schnapps.

That night we decided to have dinner at the River Cafe with Sarah and Taz. After scarfing down sack lunches numerous days in a row, I was eager to view a menu filled with real food. Maybe I’d start with a big salad or a cup of mulligatawny. Nah, no soup for you, I thought. So the waitress came over, we all ordered, yada yada yada if you’re ever in the Wesser, NC area, I recommend the burger at River Cafe. 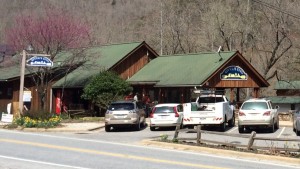 After dinner, Carsoni and I retreated to a cabin which we shared with two non-hikers, Art Vandalay and Bob Sacamano, who were there to do some motor biking. When I saw the entertainment center in the common room, I was hoping we might be able to watch Rochelle Rochelle, but alas the prognosis was negative for On Demand. However, we did get ESPN2 and the Phillies happened to have a nationally televised game that night. I had already accepted that I would miss most of the Phillies games this season, so this was a rare treat. It was a great game for the Phils until Papelbone blew a two run lead in the bottom of the ninth. Serenity now!

Another great thing about the cabin was that it had a washer and dryer. After a week in the woods, nothing makes one feel like a J. Peterman catalogue model moop than a warm shower and some clean clothes. Note: be sure to dry clothes on low heat to avoid shrinkage.

The next day we returned to the trail. The climb out of the NOC was eight miles of up. Let me just say, it was not spongeworthy. Just when you think you’ve reached the peak, nope, another babka. Plus, the weather was hot and heavy. Sweet fancy Moses, I was sweating so much I felt like I was eating Kung Pow Chicken. 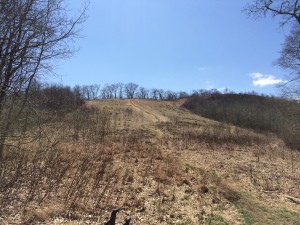 The rain came on Friday in buckets. It’s times like that when I really wished I packed my urban sombrero. Not only did I get completely soaked, but my trekking poles kept collapsing due to the moisture. I continuously needed to stop and give the poles a counter clockwise swirl with my man hands to secure it. Carsoni, on the other hand did not seem phased by the rain at all. Much like pulp, he can move, baby; flying up the rain covered hills like it was nothing. Maybe his mother was a mudder I thought. Either way, there was no time to waste. We needed to hurry to the next city, Fontana, so we could resupply at the jerk store. 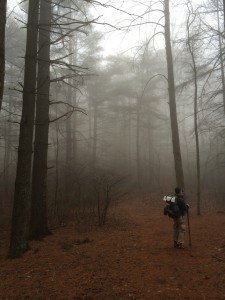 The sky was angry that day, my friends, like an old man trying to send back soup in a deli

Greetings. My name is Steve Gallagher. I am 30 years old and I will be thru hiking the AT starting in March 2014. I chose this rather unflattering profile picture because it represents the last time I accomplished a seemingly impossible goal: finishing a marathon. While running 26.2 miles once seemed impossible, spending the next 5-6 months hiking through 2,200 miles of mountainous woods from Georgia to Maine is unimaginable. It will be a true test for me, but one that I am excited to undertake. Hope you will follow along on my adventure.