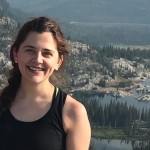 Given how many days have passed since mile 500, instead of day-by-day I’ll go through some broader updates on the trail. Overall I’m feeling great and am STILL blister free after over 70 days, which I credit to my toe liner socks and nightly Tiger Balm!

Odie and the Hiker Yearbook

One of the mainstays of the Appalachian Trail is “Odie,” a wonderful guy with a converted school bus who puts together a hiker yearbook each year. I first met Odie at Standing Bear in late April, and he tends to follow the hiker bubble and help out as he can. When we were in Damascus on May 6th, wandering around the town and figuring out where to go, we heard someone shouting, “Get on the bus!” Of course, it was Odie: six of us piled in, and he dropped us off at our hostel.

Our next Odie sighting was at Trail Days, and after that, he pulled up at a road gap to give us tons of great trail magic, take me to a hostel to pick up a box from my grandparents, and ferry hikers to and from a gas station to resupply. Keep an eye out for someone shouting “HikerYearbook.Com” and always pulling over to help hikers out…that’s Odie!

After a disastrous hitching attempt out of Gatlinburg (we had to get a hotel because we couldn’t find a ride), my hitchhiking luck has taken a turn for the better. Generally people are quite happy to pick up hikers and drop us off in town, and my favorite three rides so far have been:

I’m so used to hitching rides now that it no longer feels strange, which is saying something as I am from NYC, where people not only fail to drive, but also have an unhealthy fear of outsiders. I’ll be planning to pick up hikers if I ever drive or live near areas by a trailhead.

After a stretch of cloudy, damp, and foggy days, we finally saw the sun come out today. I never realized quite how much it rained until I started living outside, and I also never appreciated just how long it takes for damp shoes to dry out. Regardless, I love hiking on pouring, rainy days. There’s a particular point where I am so damp that I can’t get any wetter, which means I start splashing around in puddles without a care in the world. (As long as my things are wrapped up in a trash bag and fully protected). Plus, on rainy days I can’t get sunburnt. 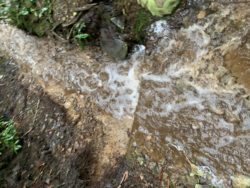 The trail looks like this sometimes. Cleans out the shoes, though.

After camping at Partnership Shelter on May 10th, my trail family had to take an unexpected zero because of the violent incident on the AT which was all over the news. The police stopped us right before we hit the road to hitch into Marion, and they had minimal info for us, other than saying something had happened overnight on the trail ahead and about 15 miles were closed. As we spent the day in town, info and rumors flew around, and we heard everything from no one was hurt to up to seven bodies were being located in the woods. The AT Facebook group was exploding, mainly with more useless info, and we kept refreshing the local news site to see if any further details could be confirmed.

We knew that the perpetrator was a hiker we’d all met at Mountain Harbor Hostel earlier in May. Back then, we had a tense, sad evening after encountering him, and someone in our trail family spent a while trying to talk to him. It was clear within minutes that something wasn’t quite right, and along with everyone else who encountered the man on the trail, we wondered if there was anything we could have done differently.

As more information came out that day and the following day, we were still feeling down, along with all the other hikers in the area. Eventually we found out, along with the rest of the country due to extensive news coverage, that Stronghold had been killed, and a female hiker was seriously injured. Walking past the area where these events took place was tough for us all, and everyone was happy to put it behind us. We ended up meeting a friend of the injured female hiker, and she passed along the news that her friend wanted everyone to keep hiking and not stop because of the incident. The whole community got tighter given Stronghold had been one of us, and even though we hadn’t met him, we’d walked the same path, slept under the same skies, and dreamed the same dream of summiting in Maine. I heard that the injured hiker plans to finish her hike next year (due to the leg wounds), and that determination is inspiring. The trail remains hundreds of times safer than any large US city, and I hope no one stops because of one terrible, unexpected event.

After an emotionally tough few days, the trail family was happy to shuttle into Damascus for Trail Days, a massive hiker fest in Virginia. It was lovely to be back, and we went back to Mojo’s (a terrific coffee shop), bought crazy outfits at the thrift store, and set up our tents in “Tent City” with hundreds of other hikers. We arrived on Thursday and planned to stay to Sunday, so there was plenty of time to relax, catch up with hiker friends, and eat good food. A church group provided free showers and laundry, townspeople everywhere gave out trail magic, and we still walked over 10 miles a day even on our vacation. Jennifer Pharr Davis, who set a fastest known time record for the Appalachian Trail, gave an inspiring talk about her adventures.

We took a break to swim in a river, did some impromptu yoga since we rarely stretch, and finally got to see Burning Man again, along with his extremely patriotic outfit and hairdo. I learned that it’s much more fun to participate in a drum circle than to listen to one from far off. Everyone dressed up in our thrift store outfits for the hiker parade, which entailed walking down Main Street while townspeople shot us with water guns. Perfect for hot and sunny days! 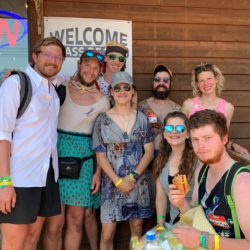 Here’s the family at Trail Days before the parade.

Right now, I’m at mile 943 relaxing in a hotel with four other hikers. We know how to fully stock hotel rooms, and our record is seven people. Our record for one vehicle is seventeen, and I challenge all the other hikers to beat it. My next post will come after I pass the halfway point on the trail, and after I’ve attempted the four state challenge (roughly 43 miles in one day). Here’s to my feet holding up.